For the original article by Francisco Alves Filho in Portuguese in O Dia click here.

A representative of the group that became famous for its live broadcasts of the demonstrations evaluates acts in Rio and the group’s assumed role of reporting police abuses.

Rio–They take to the streets with cameras in hand and only one idea in mind: to show last week’s events, live and uncut. It’s been four months since this routine has started for the young members of ‘Mídia Ninja’ (Ninja Media) group (Portuguese acronym for Independent Narratives, Journalism and Action). Their Internet broadcasts became a sort of official channel during the protests.

The ‘ninjas’ risk their lives when using their smartphones to shoot and broadcast some of the most graphic videos of the clashes (with stones and rubber bullets flying) between protesters and police. “We want to democratize information,” says Filipe Peçanha, 25, a.k.a. Carioca, which, despite the nickname, is from Minas Gerais. “The goal is to show what the conventional TV stations do not show.” 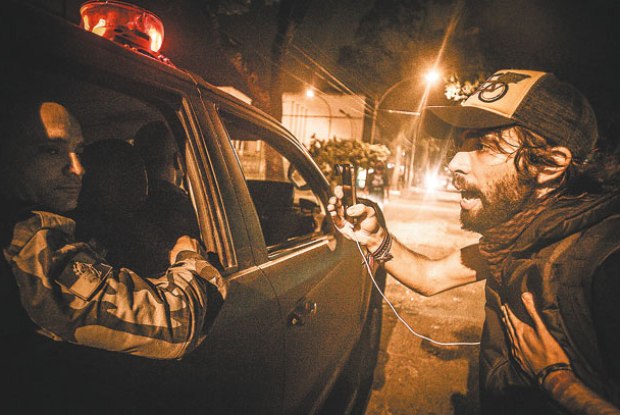 Filipe, Carioca, in action, shooting a police officer with his iPhone. Photo: Ninja

Besides spreading the demonstrations on Facebook, the group has exposed and prevented police abuse. As a result, the arrival of a ‘ninja’ at a protest is often celebrated. “This is a great incentive,” admits Filipe. The success starts in the streets and continues to the home of netizens. On July 22, during the demonstrations in front of the Guanabara Palace (the seat of Rio de Janeiro’s state government), the audience reached 100,000 spectators.

Mídia Ninja was born in São Paulo, but their operations in Rio are intense. Carioca recalls his most tense moment: “It was during the Confederations Cup final, when we were all corralled, with police troops coming and throwing bombs towards us.” 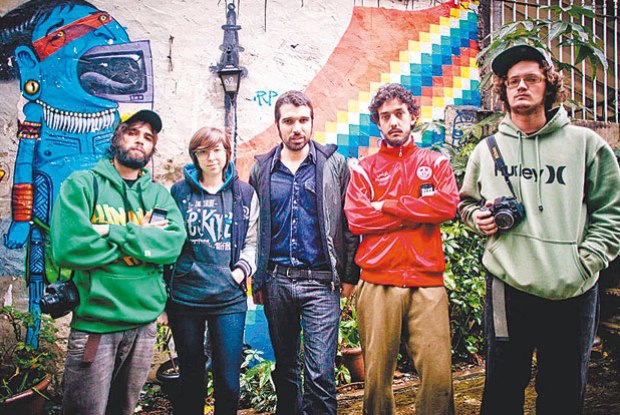 He also covered demonstrations in São Paulo from which he identifies an important difference to the marches of Rio: “In Rio, protesters have targeted Sérgio Cabral (governor of Rio de Janeiro). In São Paulo, Alckmin is not even mentioned.”

There are representatives of Mídia Ninja in every Brazilian state. With the success of the broadcasts of demonstrations, many people have offered to help the group. “We plan to create an even greater network of collaborators,” he anticipates.

It all started in the artistic community

Mídia Ninja emerged from the work of the Casa Fora do Eixo (Out of the Axis House) in São Paulo. It is an artists’ and cultural producers’ collective founded in 2005. Four years ago, they created a communications center. They first started to broadcast festivals and artistic events, and then the content became more social.

With the growing demonstrations organized by the Movimento Passe Livre (Free Pass Movement) in early June, Mídia Ninja achieved a peak audience. Creativity is the constant mark the group. “One of our most useful pieces of equipment is a grocery cart equipped with generator, speakers, computer, camera, microphone and cutting table,” says Carioca.

Back to the acts, even after being hit by an ashtray

Even after being hit in the head by an ashtray that was thrown from the second floor of the Copacabana Palace–where on Saturday morning the wedding party of Beatriz Perissé Barata, granddaughter of the transportation businessman Jacob Barata, was being held–Ruan Martins Nascimento, 24, went yesterday to a new protest that began at Largo do Machado and finished in front of the Guanabara Palace. 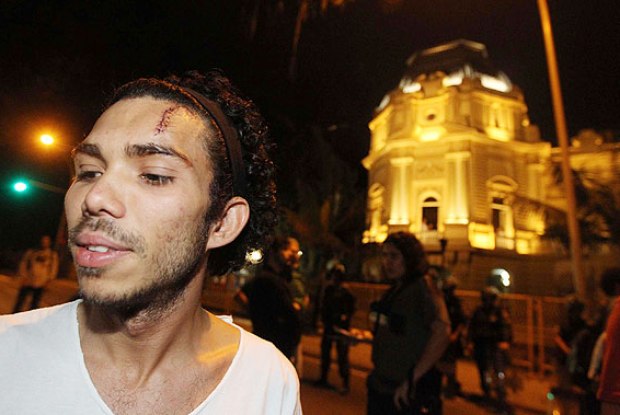 Though hit by an astray on Saturday, went back to the demonstrations. Photo: Márcio Mercante / Agência O Dia

Ruan said he was sent on Saturday to the ER in Copacabana and received 12 stitches. He also emphasized that the protest was peaceful until some of the guests began making gestures to protesters and threw R$20 notes at the group. “I did not see where it came from (the ashtray). It was very quick. It gave me the strength to keep going to new events,” he said.

Demonstration in front of the Guanabara Palace

About 300 people protested on July 14th in front of the Guanabara Palace, after walking from Largo do Machado. Shouting “Fora Cabral” (‘’Out Cabral’’), they burned a puppet representing the governor and occupied both sides of Pinheiro Machado Street. A protester passed out and was rescued by firefighters. The Shock Troop of the 2nd Battalion (Botafogo) escorted the group during the protest’s trajectory. 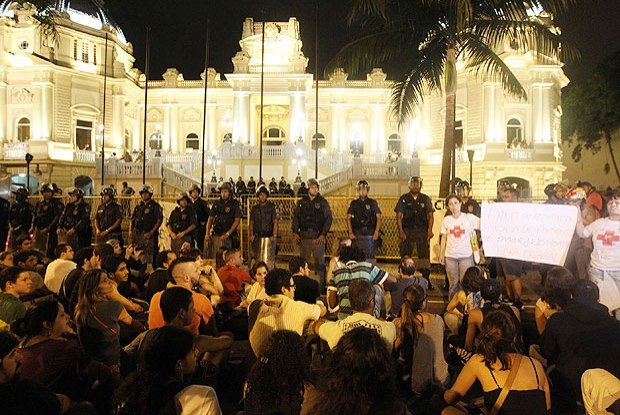 Protesters get together, peacefully, in front of the Guanabara Palace. Photo: Márcio Mercante / Agência O Dia

Pinheiro Machado Hospital, opposite the Palace, which was invaded by protesters and the Shock Troop during the last demonstration, was, this time, protected by a ‘wall’ formed with shields by the police. “Patients are tense, because you never know what will happen out here,” said the nurse Antonio Crispin.

Earlier, 20 people protested in front of Maracanã stadium. The group is against the demolition of the sports complex formed by the athletics stadium Celio de Barros and the Julio Delamare Aquatic Park. 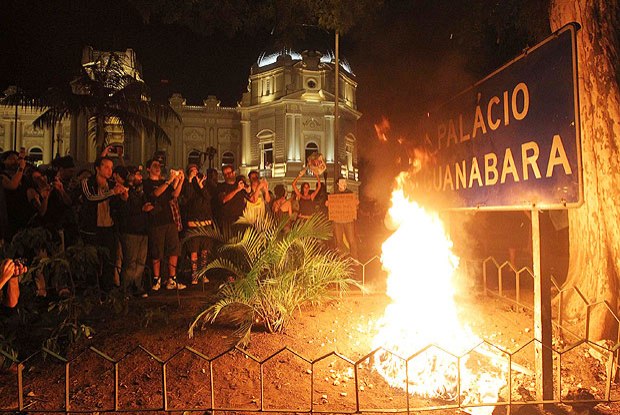 This article was written by Francisco Alves Filho, and published on August 1, 2013.
This article originally appeared on O Dia. in #Rio2016, Policies, Solutions, Translated by RioOnWatch