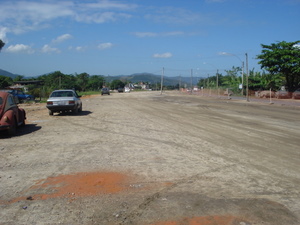 This is Part 1 of a three-part series about one community’s struggle with forced evictions. The series looks at the realities of Rio de Janeiro City government’s removal process, life for residents moved to public housing units, and life for residents who resist.

It was the week before Christmas 2010. City government officials including Regional Vice-Mayor of Rio’s West Zone, Edimar Teixeira, and representatives from the Secretary of Housing, called a meeting with residents along Avenida das Américas in Guaratiba to discuss issues involved in the community’s relocation. They planned to move residents to make way for the widening of this road. (See our February posts for background information on this community’s struggle.) The meeting was scheduled for the following afternoon on a construction site within the community.

But when representatives from the 200 families arrived for the schedule meeting, there were two large buses waiting for them. Officials told residents they would like to show them the apartments they were being offered in Cosmos, a region of the city approximately 5km away.

Upon arrival, Teixeira began shouting over the crowd, pressuring and threatening residents into accepting the apartments. Teixeira and other City government workers told community members that regardless of their decision, demolition would begin in their community the next day. “We either had to take the key, or we wouldn’t get anything… people were afraid of becoming homeless,” says one resident, Fernando. “We were totally lost, because the Vice Mayor didn’t speak with us directly. We couldn’t even hear,” claims Denilsa, “There were a lot of papers; we don’t even know what we signed. They were pressuring us and saying that tractors were going to knock down everything. Where was I going to live, under some bridge?” 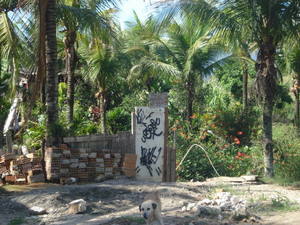 A sense of panic spread across the community, and 190 out of 200 families accepted immediately. Residents were given two days to move. Though City government sent some moving trucks, there weren’t enough for everyone, and many residents had to pay for their own. Some residents, like Denilsa, paid for their own because of the horrible conditions of the few government trucks available. “It was difficult because I had to pay out of my own pocket to move here. The workers from the government trucks were destroying people’s belongings… They would throw three, four families’ possessions into the same truck. A lot of people lost clothes and never found them,” affirms Denilsa.

Neighbors whose homes weren’t at risk for removal (because they do not occupy the area targeted for the road) witnessed the tragedy and helped as much as they could. Residents tried to save as many precious items from their homes as possible, even valuable construction material.

“It was chaos. People were rushing to save pieces of their labor, taking windows, doors, wood, as much as possible,” says neighbor Maresmol. “I was desperately trying to help my sisters from my church: ‘Maresmol, do you have any boxes? Get some boxes for me. Just leave my dog here. We’ve got to leave now! Can my daughter sleep at your house tonight?’ It was crazy here. At that time, you would see people with closets on their heads, trying to sell their furniture for R$50, refrigerator for only R$50 because it wasn’t going to fit in their new apartment.”

Contributing to the feelings of chaos were ominous tractors sent by City government to be present during the move. Denilsa tells, “The machines were going back and forth the whole time, here and there, and you were just waiting for it, waiting for them to go to work.”

This article was written by Mary Allison Joseph, and published on May 25, 2011.
in #EvictionsWatch, #Rio2016, Policies, Violations