The critical period of potential landslides on hillsides is just beginning. Unlike floods, which form immediately during a very large rainfall, landslides generally depend on a slightly slower process, where the determining factor is the level of saturation of the soil. The houses that fell apart last month, in Complexo do Alemão, did so primarily because of fragile construction, and not movement of the soil. When there is heavy rain for many hours or days, water infiltrates the soil at a higher velocity than it seeps out, generally due to percolation or evaporation. The mechanical resistance of soil greatly diminishes with saturation, and the possibility of rupture increases. Consequently, landslides could happen days after the first rains, or on a day with light rain, or even when there is no rain. 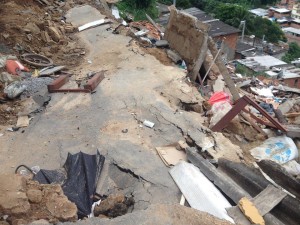 All subsequent days to an intense period of rain and prior to a prolonged period of good weather are therefore dangerous and risky. According to statements from the city’s specialists and announcements in the press, the sirens the city government installed in several favelas are triggered by rain gauges, which measure the amount of rainfall, and not by piezometers, which measure the level of water in the soil, or by a combination of the two which would be ideal. In other words, even if the sirens do not sound, the risk will continue to exist because of saturated soil. Therefore, the general rule is to pay special attention during and a few days after a period of rain, until a few days of sun “dry” the soil.

Precautions in favelas consist of observing critical areas and provisionally evacuating houses during and after a storm in the most problematic areas. According to multiple surveys our team conducted in several communities since 2010, various houses and areas were identified at risk, and many of these observations are in the reports we released. In the communities where I did not prepare a detailed report, I remember as particularly critical the cases of Fogueteiro and Guararapes.

Beyond these precautions, it is important to remember and denounce that based on our past visits and inspections we have highlighted diverse locations where analyses, projects, and construction are necessary [to protect residents from landslides] in various favelas. According to information gathered in these communities, with the exception of two places in Morro dos Prazeres and perhaps in Laboriaux, City Hall has not acted on the recommendations given, decisively contributing to the persistence of risk both on hillsides and potential flood areas. This was the case in Parque Columbia, in particular the area of Rua Idelfonso Falcão, where according to newspaper reports the area flooded again last December 11. If this serves as a sample, which appears to be the case, then this irresponsible conduct should be generalized to all the favelas in Rio, and the municipalities of the metropolitan, mountainous and other regions of the state.

Municipal authorities (and the state government also) repeat therefore, since 2010, negligence that we denounced in 2010. During that time the graph below was shown in various lectures and meetings, including a meeting with the Engineering Club and the Pontifical Catholic University (PUC) of Rio:

It is obvious that after a sudden increase in the total value of construction contracts realized by Geo Rio (Rio’s Geotechnical Institute), after the rain disasters of 1996, it returned to mediocre values and stayed that way until the new disasters of 2010. This shows the projects created to establish preventative measures were not taken seriously. 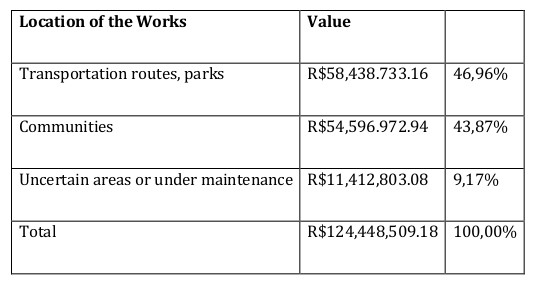 In other words, a major part of the money was used in projects to reinforce and protect streets, highways (such as the large projects carried out in the Grota Funda and Grajaú-Jacarepaguá highways, for example) and internal roads in parks (various projects in the Tijuca National Park, for example, including the project which permitted the reopening of the cog railway to the top of the Christ statue) instead of in communities where the preventative projects have a greater effect with regards to avoiding the loss of human lives. I did not research the data regarding contracts after October 2010, but I do not think it likely that the overall direction of the investments by the city government has changed in the years following up to today.

It is information and realities such as these that we must amply divulge in order to prevent governments from taking advantage of another possible tragedy to once again blame residents of the favelas, its movements, and support groups, for something that is consequently a result of the negligence and deliberate choices of those very same governments.

This article was written by Maurício Campos, and published on January 8, 2014.
Translation provided by Emma Platais. in Policies, Sustainability, Violations