For the original by Fransérgio Goulart in Portuguese, published in Viva Favela, click here. 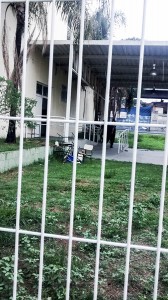 The swimming pool is inaccessible to Manguinhos residents.

In 2008, the teenager Cristiano Pereira Tavares, then aged 13, became a symbol of the Brazilian federal government’s Growth Acceleration Program (PAC) after being photographed swimming in a puddle of muddy water in the Manguinhos favela. The scene was the subject of a large amount of media coverage at the time. After being photographed, the adolescent met with then President Lula four times and, in one of the meetings, the ex-president made a promise: “You and your community will have a swimming pool.”

Five years on, the community, especially children and young adults, is sad not to be able to use the swimming pool located in the Luis Carlos da Vila school because a wall was built around it, blocking access to it. The Education Ministry announced in 2012 that access to the swimming pool had been restricted because Manguinhos residents had been mistreating it.

While the community complains that the promise made by ex-president Lula was not upheld and vindicates its right to leisure, some people jump the wall to gain access to the pool.

In January of this year, photos taken of the area showed that the swimming pool was almost empty and very dirty. As well as running the risk of an accident from jumping the wall, children are also at risk of contracting various diseases if they use the pool in its present condition. 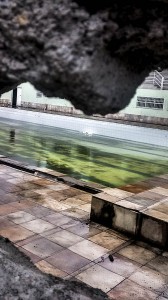 A dirty pool is a hotbed for diseases.

Manguinhos resident Monique Cruz, who is part of the Forum Social de Manguinhos (Manguinhos Social Forum) community group, said that Police Pacifying Unit (UPP) officers have been patrolling the area in order to prevent children and young adults from jumping the wall. Some residents witnessed policemen using pieces of wood to reprimand two young people who had jumped the wall. Their escape from the police officers was captured on film, but the teenagers asked for the footage not to be shared for security reasons.

Manguinhos residents did not want to have their names published in any reporting of the issue, but they did confirm that the community does not have access to the swimming pool. One woman joked: “Where’s our pool? No one knows, no one’s seen it.”

The governing body of the high school that houses the swimming pool was contacted, but replied that the school could not make any comments on the matter without the Ministry of Education’s permission. The Manguinhos Social Forum has suggested that a public meeting could be held on the subject, inviting Manguinhos residents, representatives from the high school, the UPP and other local social organizations such as Rio+Social and the social co-op group of (neighboring health institute) Fiocruz, as well as children and adolescents from the favela. The aim of the meeting would be to organize a way for the community to have access to and use the swimming pool space.

“We know how to use the pool; they just have to let us use it.”

Renata Oliveira, part of the community organization Rede CCAP in Manguinhos, works with teens and describes their anger at the pool’s closure. According to her, their complaint is always the same: “If Lula said the pool was ours, why are we forbidden from using it?” Renata, who is also part of the city-wide Rio de Janeiro Youth Forum, proposed organizing a rolezinho, a kind of flashmob, at the pool.

P. Silva, 14 years old, resident of Morro do Amorim in the Parque Oswaldo Cruz favela, says he jumps the wall and will continue to do so, because the swimming pool belongs to the community. “We know how to use the pool; they just have to let us use it,” he assured.

This article was written by Fransérgio Goulart, and published on December 26, 2014.
Translation provided by Sarah Jacobs. This article originally appeared on Viva Favela. in *Highlight, Translated by RioOnWatch, Violations