The volunteer coordinators and monitors of the Colônia Eco summer camp. Photo by Amaury Alves

For the original in Portuguese, published in Viva Favela, click here.

Every year, children between 6 and 12 years old, from Santa Marta favela in Botafogo in Rio’s South Zone, have a date with Rio’s beaches, parks and other leisure spaces across the city. This summer camp, which goes by the name of Colônia Eco, has been active every year for the last 36 years. It has received up to 350 children in past summers, and this summer the number stands at 200 children. However, this year, a lack of sponsorship for the camp, as occurred last year, means the camp program has been reduced from 15 days to just a week and some of the traditional trips have been removed from the program. 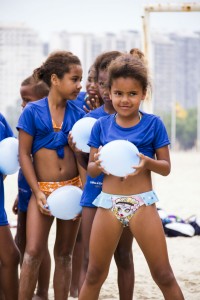 The camp provides children with different options for keeping entertained during the holidays. Photo by Amaury Alves

The creators of the summer program have adapted it to account for the lack of sponsorship, but they are mobilized and ready to change things for the better. “For 34 years, we have put on a 15 day program of activities. Due to a lack of resources we’ve had to cut down to a week. The costs are high. Transport for the children alone costs R$3,000 per day. In the past we had sponsorship from the Brazilian Insurance Confederation, CNSEG, and at the end of February we’re going to have some meetings with people interested in sponsoring us so we can go back to the original program,” says Itamar Silva, the coordinator of Grupo Eco, the community organization that first created the project in the late 1970s.

On January 5, children participating in this year’s summer program spent the day at Clube Megaville, a water park in Guaratiba in the west of the city. The following day they went for a walk on the beach in Flamengo and swam in the sea. The week’s program also included a trip to the cinema. “The program is put together according to the children’s requests,” says Jocélia Montes, one of the coordinators, who also regretted the reduced time frame. Another staff member, Barbara Barreto, agreed: “We can’t let this work die.”

A history of solid partnerships 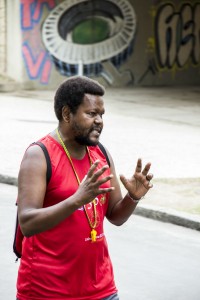 Itamar, general coordinator, has been at the front of Grupo Eco for 36 years. Photo by Amaury Alves

In 1977, the then journalism student Itamar Silva, born and raised in Santa Marta, created Grupo Eco with the intention of strengthening ties between the residents of the community in order to produce news about, and for, the favela. “It was a difficult period at the time and the idea was to motivate people to think about issues in the favela, such as the lack of basic sanitation and problems caused by narrow streets, among others.” Grupo Eco produced a printed publication that reached a circulation of 3,000 and even a community TV station–Favela TV–which was active until 2013.

Alongside the main aim of improving community communication, Itamar had another idea which came out of a childhood memory. “When I was a child, my teacher used to ask us to write an essay on our summer vacation when we returned to class. For me, playing marbles and flying kites on the hillside was nothing special to write about, as it was what I did every day of the year. When I grew up, I decided to create a summer camp to take kids on trips so that they would have something to talk about,” he explains. “What characterizes our work is the focus on a right to leisure: the right to go anywhere in the city, to be a child and to be able to occupy different spaces,” he adds.

One of the most loyal supporters of the project since it began has been the private school Colégio Santo Inácio, that has loaned the use of its playground, sports grounds and swimming pools for children to use during one or two days of the holiday camp. The school also paid for the backpacks and shirts used by the group. “Santo Inácio is a most important partner, which allows the children to play in a clean, tidy and safe space where they are well looked after. The children deserve this and I believe it is our role to provide this–to look after them in a way that balances leisure with their safety,” Itamar says. He credits other partners including SESC Tijuca and SESC Nova Iguaçu (Serviço Social do Comércio or Commerce Social Service–a private non-profit institution that acts throughout Brazil) which has helped create the program for the participating children. “This is a great partnership, especially because it allows us to discuss the role of these organizations that use public money.” 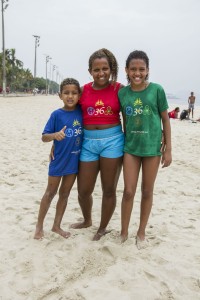 Janara Siqueira, who took part in the summer camp as a child, with her children Raí and Raíssa. Photo by Amaury Alves

“This is an opportunity that few children have access to,” says camp monitor Janara Siqueira, 27, who took part in the summer camp as a child. This year she is accompanied by her two children. The eldest, Raíssa, 10, started taking part four years ago, to the dismay of her brother Raí, now 6, who used to watch her through the window, crying as he waited for his sister to return. “Now he is pure happiness,” says their mother. “I think it’s great, really fun. I loved going to Megavida!” shouts Raí, referring to the Megaville water park. His mother laughs at his mistake, but she agrees with him.

The affection Santa Marta residents have for the Colônia Eco summer camp is such that some of them dedicate their time to volunteer for it. This is the case of the photographer Roberto Sousa. “I was invited by one of the coordinators to take photos to mark the camp’s thirtieth anniversary and the plan was just to spend one day taking photographs. But I came back for a second day, then a third day, and now I’ve been here for six years,” he says. 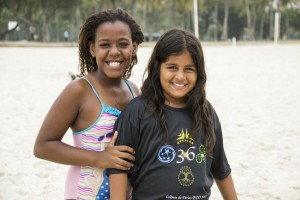 Ana Alice, 11, and her friend Raine, nine, sum up their experience: It’s good to share!

Those who take part in the summer activities as children often become volunteers and even coordinators of the program. Today the team consists of 40 people, all volunteers. “The work is about having fun, making friends, transmitting values and strengthening a sense of responsibility and companionship,” explains Jocélia Gomes, who is accompanied by her granddaughter Nathalia. “It breaks our hearts. If we could, we’d make the summer camp last a month.”

Dorlene Meirelles, one of the coordinators of the project, has been participating for 36 years. She first took part as a child at the age of 10 and three years later had already become a camp monitor. Today her role is to look after the group of children aged 11 and 12 years old. Her colleague Michael Luiz da Silva, 29 years old and participant in the project for 16 years, is responsible for the group of older children. According to him, the role includes monitoring activities as well as environmental and citizenship education.

Ana Alice Souza Batista, 11, and her friend Raiane, nine, are part of the second generation of their respective families to attend the summer camp. They summarize their experience in a few words: “It’s so great to be here and to share experiences with others.”

This article was written by Sol Mendonça, and published on February 8, 2015.
Translation provided by Sarah Jacobs. This article originally appeared on Viva Favela. in Civil Society, Opportunities to Support Favelas, Translated by RioOnWatch