Rio de Janeiro is known to be an unequal place. Resulting from historic inequalities and urban planning concepts dating back to the beginning of the 20th century, the city’s socioeconomic segregation is highly driven by income and status, with a declining gradient from the upper-class neighborhoods in the South Zone, to the city center and the suburbs in the North Zone and West Zone. Patterns of inequality are further described by an urban mosaic, where favelas and formerly informal settlements are located in direct proximity to high income areas. Many aspects of these urban spatial inequalities have direct impacts on the daily lives of Rio’s urban dwellers.

Poverty and health-based inequalities are often exacerbated in urban settings, and health research has shifted towards a focus on intra-urban differences. Shortly, the academic journal Cadernos de Saúde will publish an issue on urban health featuring our study of health inequalities in Rio de Janeiro. This article gives a short overview of that paper’s findings and conclusions.

In order to measure health inequality across the municipality of Rio de Janeiro, we generated an Urban Health Index (UHI) for all neighborhoods for the years from 2002 to 2010. The index incorporates eight indicators using mortality data: diabetes, ischaemic heart disease, breast/cervical cancer, tuberculosis, HIV, homicides, traffic accidents and infant mortality. Findings revealed that, overall, 2010 saw lower inequalities and higher index values than 2002. For the individual indicators only diabetes and tuberculosis recorded a slight increase in inequality. 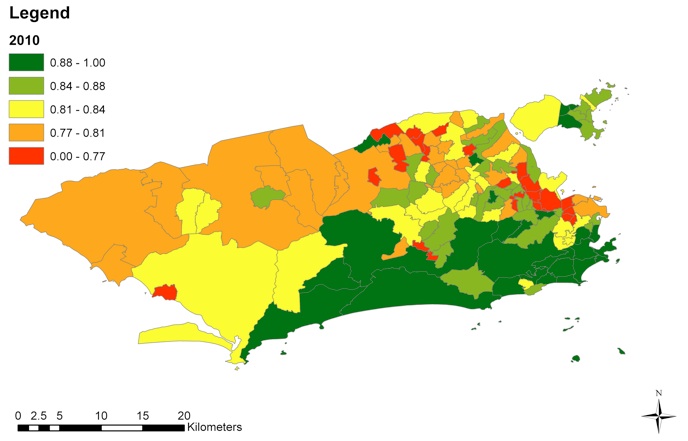 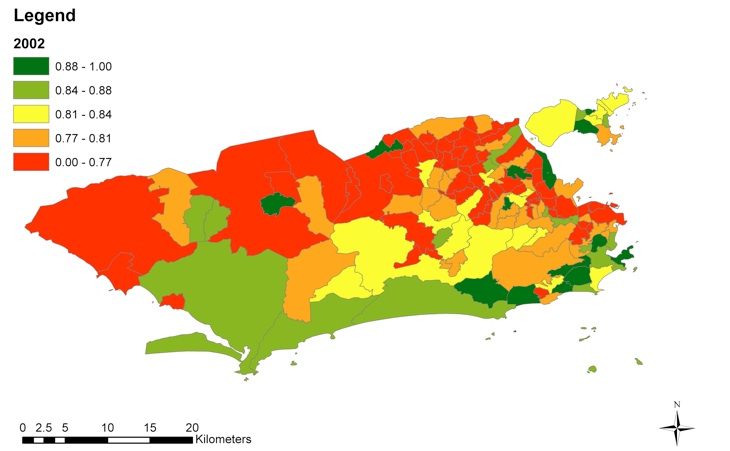 In 2010, low index values were observed in northern and central neighborhoods. Northern and north-western regions remain particularly unable to close the equity gap.

Bivariate correlation analyses at the neighborhood level revealed that health status is associated with income and other economic and socio-demographic indicators. A neighborhood’s average apartment’s square-meter price and its distance from the city center correlated highly with the UHI. In particular, single indicators such as diabetes, tuberculosis, homicide and infant mortality showed higher correlation coefficients and seem to serve as the best determinants of socio-environmental conditions. 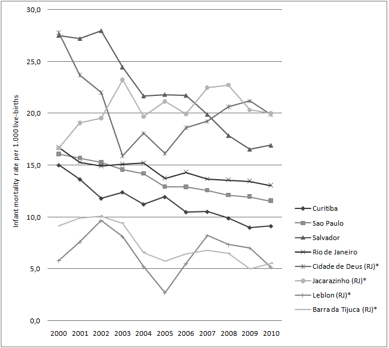 Figure 2. Infant mortality rate per 100,000 live-births from 2000-2010 in select neighborhoods of Rio de Janeiro and four Brazilian cities. Asterisk (*) denotes mortality rates after the application of a 5-year smoothing median.

The World Health Organization (WHO) understands health as a product of various underlying Social Determinants of Health. As in the case of Rio de Janeiro, ill health is often associated with disadvantaged living conditions. Urban space is therefore a Social Determinant of Health since it produces certain health outcomes by providing and preventing certain social circumstances. Following the WHO’s argumentation, it is here where health disparities are turned into inequities because they are systematic and socially produced. Space can be a product of preexisting systematic inequalities that are generated by a complex interplay of political, economic and social patterns.

In Rio, neighborhoods with a large percentage of poor and black residents have the worst UHI values. These outcomes invite reflections on the history of the spatial and social marginalization of the city’s poor and black residents. In neighborhoods that show worse health index values, neither the places nor their people themselves are underdeveloped. Such an argumentation stigmatizes less privileged city dwellers. From an egalitarian point of view, society and government policies should provide the necessary standards and opportunities to improve living conditions and healthy lifestyles. Brazil, as a modern and progressive BRIC country, should enforce responsibility for providing healthy environments and living conditions that allow diseases such as tuberculosis to be controlled.

Findings revealed that tuberculosis, infant mortality and diabetes are closely related to social and urban environmental conditions (Figure 2). Improving diagnosis and efficient therapeutic schemes will therefore have only a limited impact. Brazil has extensive tuberculosis and HIV drug programs, but spatial and socioeconomic dimensions need to be recognized and addressed in order to make any therapy successful.

The fault for health inequalities cannot be ascribed to the health sector alone. Closing the gap requires an integrated society to address challenges in various sectors. An ideal civil society has a critical awareness of unfair living conditions in its immediate vicinity. Such a sense of solidarity and social cohesion is mandatory for reducing inequalities, but is too often missing in Brazilian policy. The state naturally has a special role to play in the process of building equality, as it is governmental institutions that have the planning instruments and the power to implement new policies. In Brazil, the theories of Lefebvre, Harvey’s Right to the City, and Alma Ata’s Health for All are embraced in diverse legislative forms, but there is discrepancy when those standards are translated into practice.

Until the 2016 Rio Olympics were announced, there was no urban development concept to address these structural disparities. Now, due to the Olympics serving as a catalyst for new urban policies alongside a growing public awareness, Rio de Janeiro has a historic opportunity for change. Protests in 2013 demonstrated that health, in addition to education and transportation, is one of the most important issues people want to address. It is clear that some basic processes are underway in which politics, the health sector and civil society have aligned to address the social and spatial equity gap. Evidence has shown that it is not investment in the built environment alone but social programs that shift the patterns of inequality.

The results of this research support the Family Health Program (FHP) that was initiated by the federal government and implemented by the Municipal Health Secretary in 2008. The FHP is expected to cover 70% of Rio’s population by 2016. The FHP is based on a community approach that responds to local neighborhoods’ individual characteristics. It focuses on prevention and disease control and is expected to allow for improved surveillance and evaluation. Nevertheless, the FHP only addresses primary health care and will not be able to fully address the socioeconomic dimensions of health inequalities.

A key characteristic of humanitarian and sophisticated civil societies is the struggle to achieve a state of equity in the population’s health. Development in Brazil should not be evaluated by economic markers alone but by the society’s transformation as a whole. Health is one of the best indicators of city dwellers’ overall well-being and of progressive urban development. Our study of the UHI has shown that health inequality is slowly decreasing, but real health equality cannot be a reality without the political struggle for social justice.

Martin Bortz is a Doctoral Candidate at the Medical School of the University of Heidelberg, Germany. His doctoral thesis is on health inequality in the city of Rio de Janeiro. The project is realized in collaboration with the WHO Centre for Health Development Kobe, FIOCRUZ-ICICT Rio de Janeiro and the Public Health Institute in Heidelberg.

This article was written by Martin Bortz, and published on July 29, 2015.
in *Highlight, by International Observers, Research & Analysis, Understanding Rio