Alan Brum Pinheiro addresses the residents of Complexo do Alemão at ReintegrAÇÃO, an event held on January 31.

In a meeting with activist leaders from Complexo do Alemão on February 6, Mayor Eduardo Paes agreed to move forward with the construction of a higher education institution in the community after the project almost fell through due to a failure to provide the land to build the campus.

The project to build a campus of the Federal Institute of Rio de Janeiro (IFRJ) in Complexo do Alemão was set in motion in 2011, when President Dilma Rousseff launched an initiative to open 208 new higher education institutions throughout Brazil–three in the city of Rio de Janeiro.

According to the coordinator of IFRJ’s Department of Institutional Development and Expansion, Marcos Clivatti Freitag, one of the other campuses was approved for City of God and the third for Praça XI, in a building currently occupied by the Centro de Artes Calouste Gulbenkian. The City chose and approved the locations in 2011 and 2013, respectively, he said.

Despite the approval of the projects, however, authorities delayed building the campuses. As 2015 arrived, the approval for a Complexo do Alemão campus expired and the community was outraged.

In Complexo do Alemão, the initiative’s slow progress was met with frustration. Alan Brum Pinhero, community leader and general coordinator of Instituto Raízes em Movimento, said residents had no knowledge of a higher education project for the community until late 2014, which is why they had not pushed the authorities for faster development.

When the project’s approval expired in early 2015 the Department of Education could have discontinued the initiative and taken back the almost US$3 million (R$8.5 million) it initially allocated to the project. Pinheiro said this loss could have deprived some 1,500 students of education as well as the employment opportunities the institution could generate. 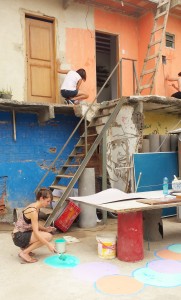 Activists renovate a space at the ReintegrAÇÃO event in Complexo do Alemão.

In January, community activists began to pressure the City to donate the spaces it had promised. Community leaders created a Panela de Pressão petition and wrote an open letter to Mayor Paes. The petition garnered 2,449 signatures.

The petition demanded Mayor Paes take action by immediately signing a document that guaranteed the completion of the project and by finally donating a space for the institution, the only obstacle keeping IFRJ from beginning construction. Paes accepted these terms at the meeting last week, Pinheiro said.

Complexo do Alemão leaders reached out to activists in City of God to encourage them to also demand the mayor guarantee an institution in their community.

Community leaders, including Pinheiro, have met with IFRJ Provost Paulo Roberto de Assis Passos to discuss the issue, and they intend to keep pressuring both sides to progress with the project.

“We will have a great IFRJ campus in Complexo do Alemão,” Pinheiro said. “We won’t take a step back until the construction of that campus begins here.”

Why was space an obstacle?

Pinheiro said that in 2011 the City had tentatively approved a piece of land for the campus in Complexo do Alemão. However, the project was derailed after the implementation of the Pacifying Police Unit (UPP) in 2012. The land initially allocated to the university was instead used to house the Coordinating Body of Pacifying Police (CPP), Pinheiro explained.

The CPP is the state’s military police coordinating department, which means it does not need to be located in a specific community. It could be placed anywhere else including the Cidade da Polícia about two kilometers from the community.

“[The CPP] can very well be built anywhere else in the the state of Rio de Janeiro,” Pinheiro said.

According to an IFRJ press release, the three planned institutions are supposed to contribute to the pacification processes in both Complexo do Alemão and City of God.

Complexo do Alemão leaders have recently identified three other locations in the community that could house the institution. Pinheiro said all that needs to be done for construction to begin is for the local government to evaluate these locations and pick one.

A positive impact on the community

On January 31, activists gathered for a community event called ReintegrAção to raise awareness of the positive impact that art, culture and education could have on the community.

Ananda Trajano, a 15-year-old student and member of Coletivo Papo Reto, signs the petition for the implementation of an IFRJ in Complexo do Alemão.

For young student activists in Complexo do Alemão, an institution for higher education in their community would mean easier access to education and cultural activities.

Ananda Trajano, a 15-year-old member of Coletivo Papo Reto, said seeing a university so close to home would make going to college seem more achievable for community residents. It would not only benefit the young, but everyone in the community.

“It is important because it would provide all residents with cultural opportunities and knowledge so we can experience new things,” she said.

During Saturday’s community gathering, Pamela Passos, activist and professor at IFRJ, strongly encouraged residents to continue fighting for the implementation of the institution.

“Don’t let that story of ‘it’s the president’s fault, or the Department of Education’s, or the City’s’ divide you. It doesn’t matter whose fault it is. What matters is that we want IFRJ here,” she said. “The future of the favela depends on the seeds you plant. I want to plant education. Enough police. Education, IFRJ in Alemão now!”

This article was written by Elma Gonzalez, and published on February 12, 2015.
in *Highlight, by International Observers, Civil Society, Opportunities to Support Favelas, Solutions