Vale Encantado is part of Alto Da Boa Vista, a region of Rio tucked into the Tijuca rainforest. The community got its name from a luxury condominium complex that was supposed to be named “Enchanted Valley” before its construction was stalled in the late 1960s. Today only one of these condos sits at the top of the community.

Vale Encantado, marked in red, is located in the middle of the Tijuca Forest, one of two urban forests within Rio de Janeiro city (the peninsula shown here).

The community itself is much older, however. Originally named ‘Taquara do Alto da Boa Vista,’ it was settled by workers and owners of the coffee plantations that had been planted in the region prior to 1860. But following Peter II of Portugal’s pronouncement that the region would be reforested, in 1861, they were then banned from producing coffee. Over the following century workers and their descendants who stayed in the area turned to agriculture, then floriculture and later granite mining as prime sources of income. Just short of Rio’s 1992 Earth Summit, their final extractive venture–granite mining–was banned due to increasing environmental awareness associated with the event. The community’s economy, unable to recover, stalled.

Many families moved elsewhere, leaving only those who had ties to the land or who lacked the economic means to leave. About 140 people live in Vale Encantado today. Women whose husbands had died in the community’s dangerous former industries were left with households to care for and no sources of income.

In constant search for a solution, Otávio Barros, a 5th generation resident elected president of the Vale Encantado Residents’ Association in 2005, got his answer upon being introduced to the French friend of a neighbor from the nearby condo. Upon meeting Otávio and discovering the sustainability gem that is Vale Encantado, Jerome Auriac encouraged Otávio to look into eco-tourism and established the French NGO ABAQUAR Paris to help. They began working together to build the potential of Vale Encantado for environmental tourism, Otávio becoming formally trained as a guide and establishing the Vale Encantado Cooperative in 2007, to provide employment to community families while supporting the environment.

Thus the co-op’s activities began by giving ecological tours in the forest which today envelops the community. A local home was used to host tour groups. Immediately, however, a search for more adequate facilities began and in 2009 ABAQUAR Paris provided resources to help with the purchase of the co-op’s building. In March of 2010, members were able to fully pay off the space using income from that year’s tourist visits.

Today, the co-op has been able to generate employment for 12 out of the 20 original members and they are working to build demand for tours and a their unique restaurant dining experience to pay more members and generate greater full-time opportunities for community engagement. Of the 12 current members, six work full-time at the cooperative while the other six have outside employment as well. In Otávio’s case, he was able to leave his prior job of 25 years, as a secretary at Rio’s Pontifical Catholic University (PUC), to dedicate himself full-time to being a guide and developing the community. Given the community’s small scale, this handful of opportunities reaches all corners of the community.

To ensure expansion, after subtracting outside expenditures from the co-ops’ income, 20% is invested back into the co-op. Currently, the set wage for all co-op workers is US$1.50 (R$4.50) an hour. Some members choose to reinvest greater portions of their salaries into the co-op. They expect to have more full-time work and higher wages as tourist demand rises. The opening of the cooperative restaurant in addition to other sustainable projects budding in Vale Encantado are bound to increase daily traffic in and out of this mini-paradise.

Over the past six months, Vale Encantado has made progress on a multitude of exciting projects beyond its initial solar panel project, including the installation of a biodigester, the development of a sewerage plan, continued efforts to gain land titles, and the building of a new neighborhood association headquarters, a community garden and the rustic and beautifully designed cooperative restaurant. 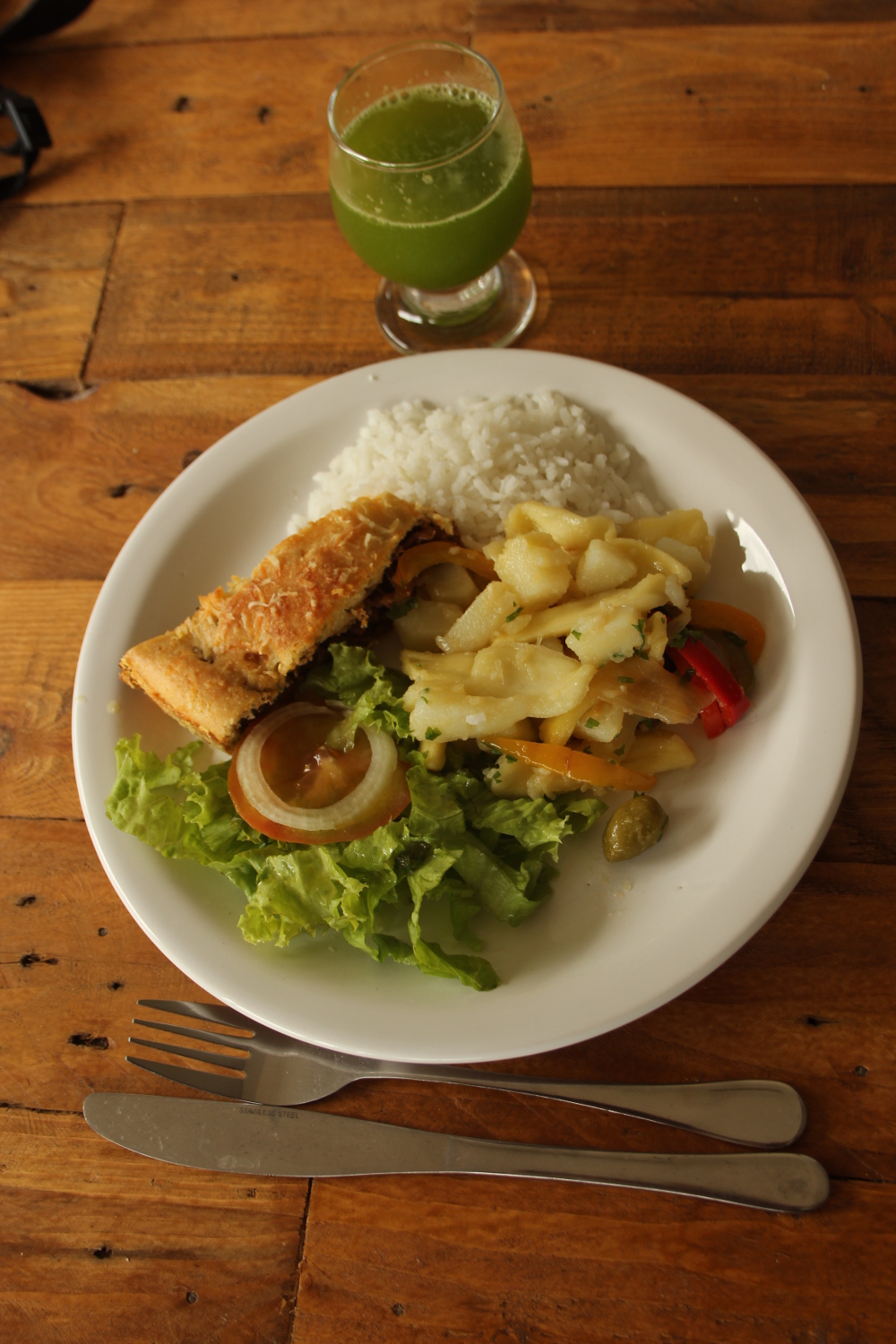 Through a partnership with PUC, the co-op currently provides training and income to a family in Vale Encantado to manage the incipient community garden which will ultimately provide supplies for the cooperative restaurant, the community, as well as produce to sell. PUC collaborators teach the family gardening practices and are helping develop the garden such that it provides a sustainable source of income to the family. 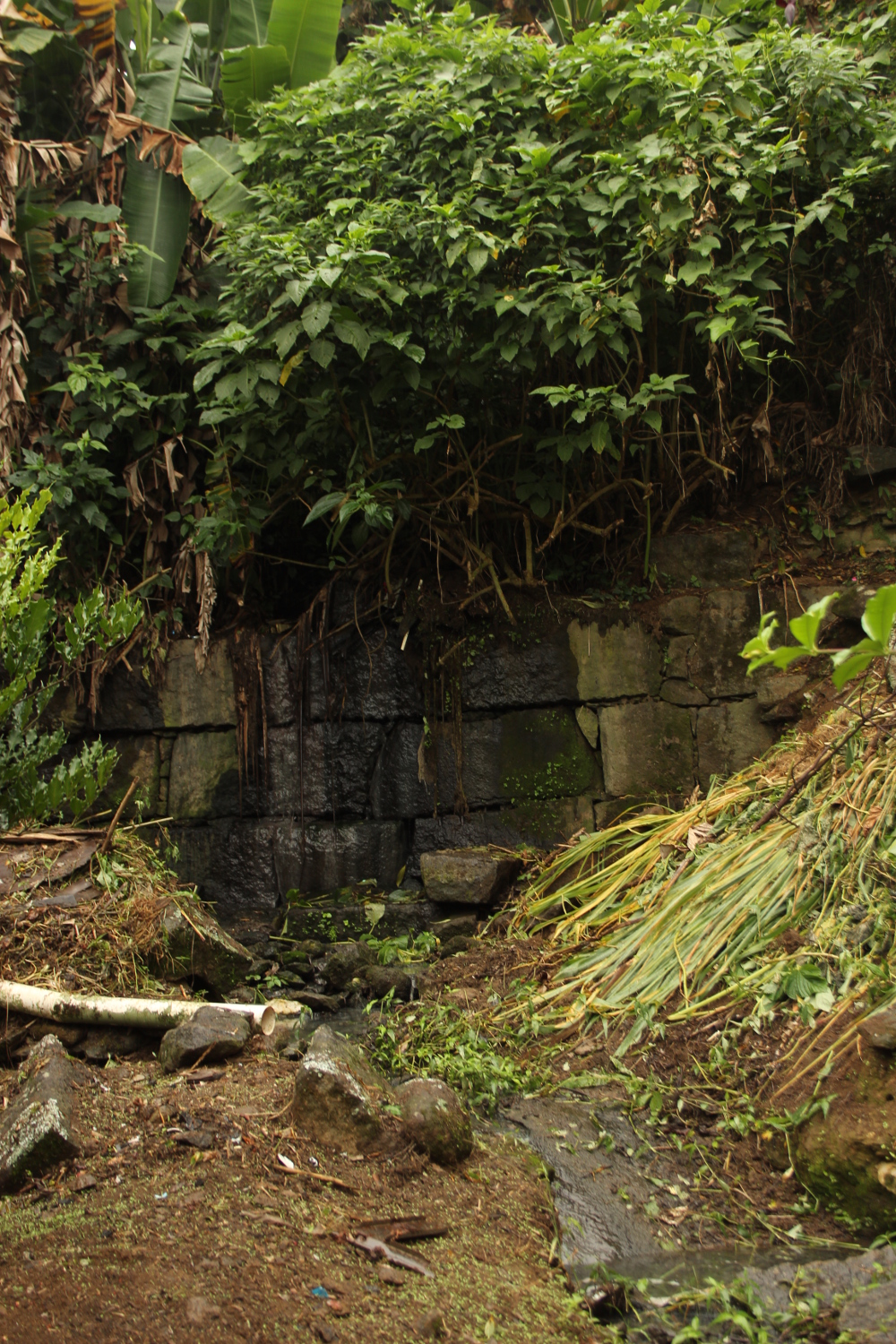 Open sewage at the bottom of Vale Encantado

Vale Encantado lacks a proper sewerage system. Community members have built pipes that channel water from their homes, which combine with the sewage pipes from the condominium up the hill, all of which is released into the forest below the community. Naturally occurring banana trees below may help cleanse some of this water, but there has been no intentional investment on the part of the city, condominiums or community to improve the situation until Vale Encantado co-op members made it their goal to remove this sewage from the surrounding environment. Partnering with the Federal University of Rio de Janeiro (UFRJ), the community is now undertaking a thorough study to establish an ecological sewerage treatment model. A range of solutions are being considered, from constructed wetlands-type models to biodigesters. Otávio plans to approach the condo community for support once the new program is implemented, as it will be cleaning their sewage as well. 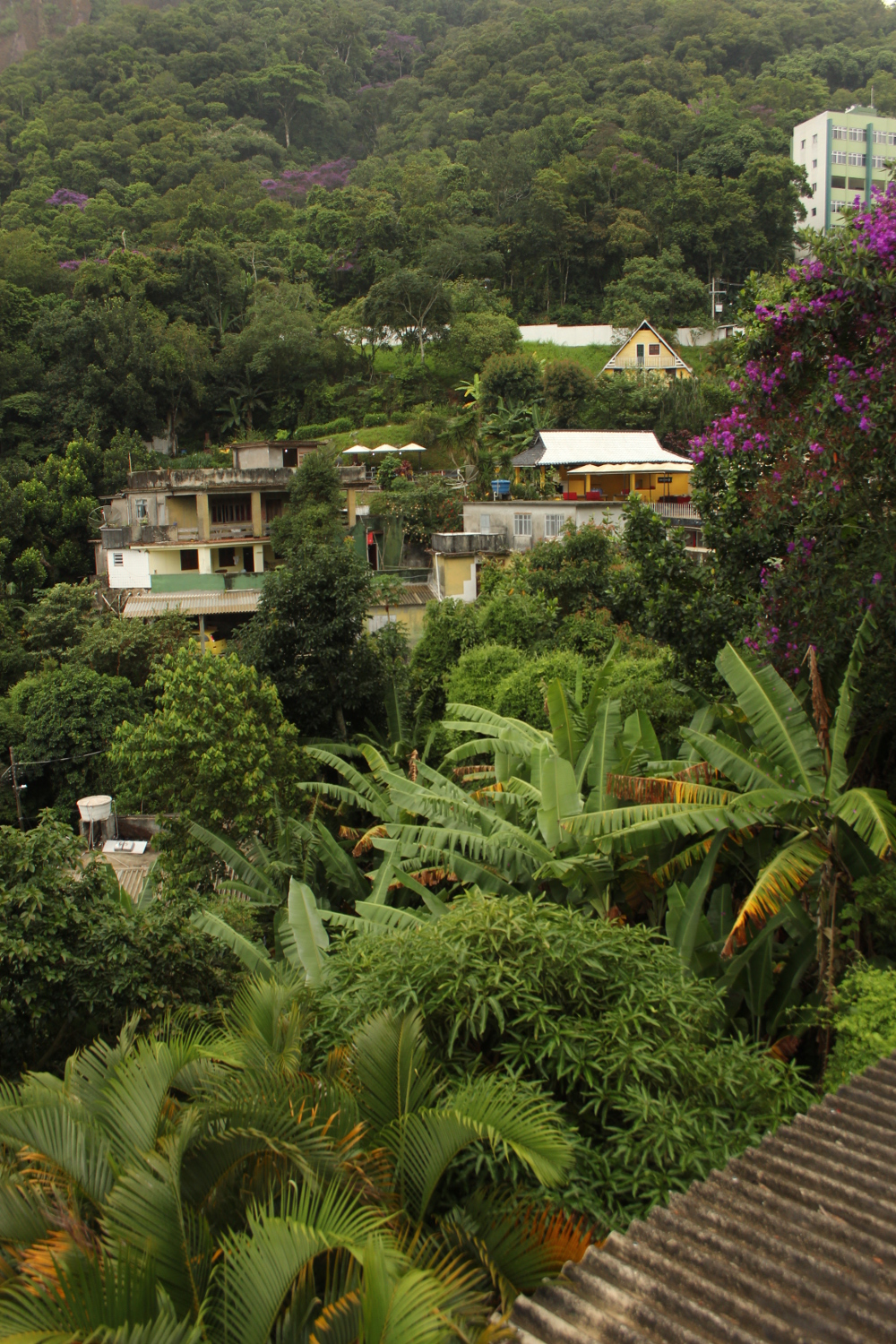 Otávio is also working on obtaining land titles for the Vale residents. He is at the end of the titling process and hopes to gain protection against current threats of eviction. There is ample documentation that some of the families here have been occupying the area for well over one hundred years. 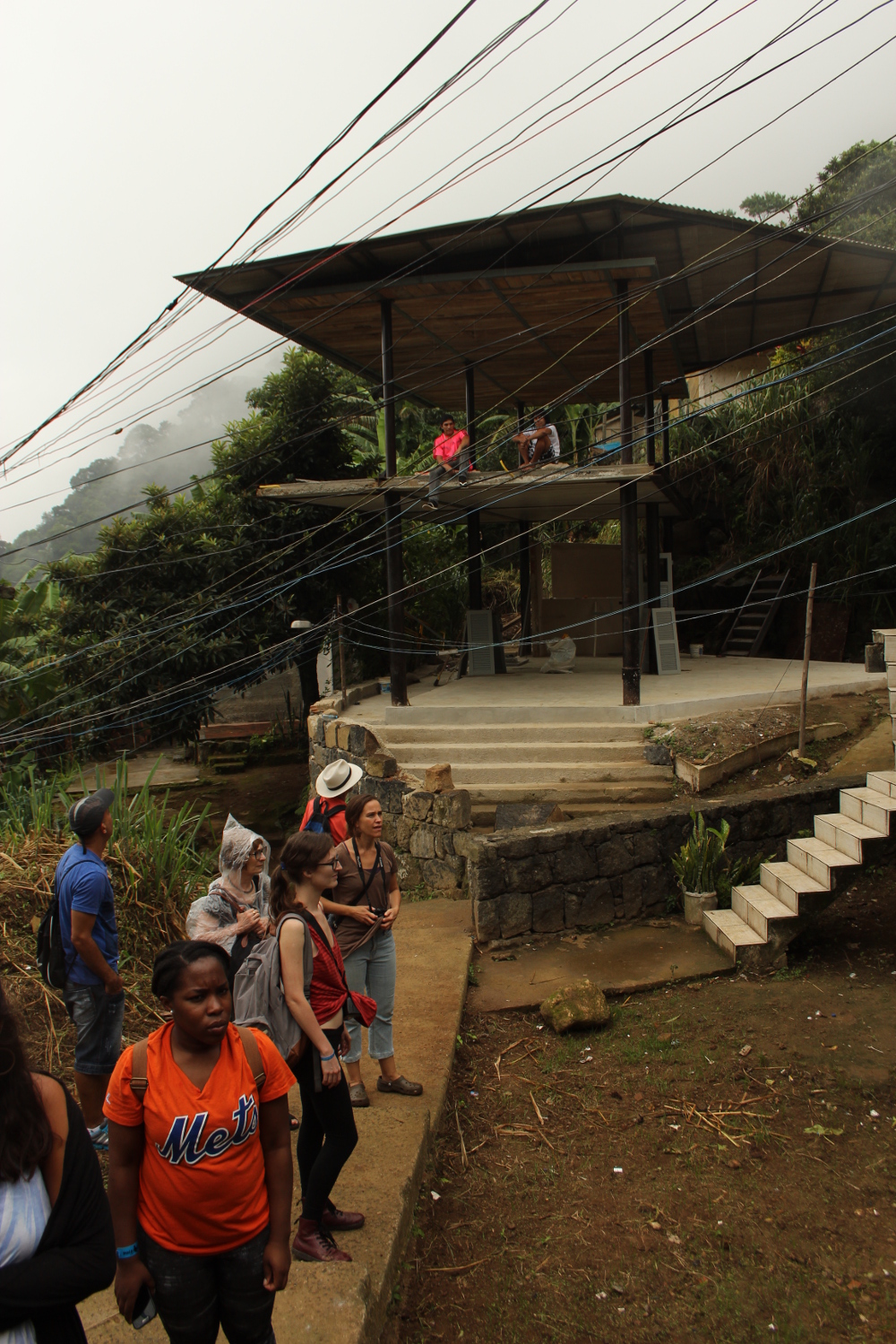 Quite far along now is the construction of a new headquarters for the Vale Encantado Residents’ Association, to be used for meetings as well as a central spot for community planning and activities. The association building is being built thanks to last year’s Enchanted Festival, which takes place annually in the private club between the community and the condominium above. The festival has brought Brazilian greats like Seu Jorge and Criolo to perform. Proceeds from the festival each year are dedicated to an improvement in the community and last year’s resources were dedicated to building the new association space. 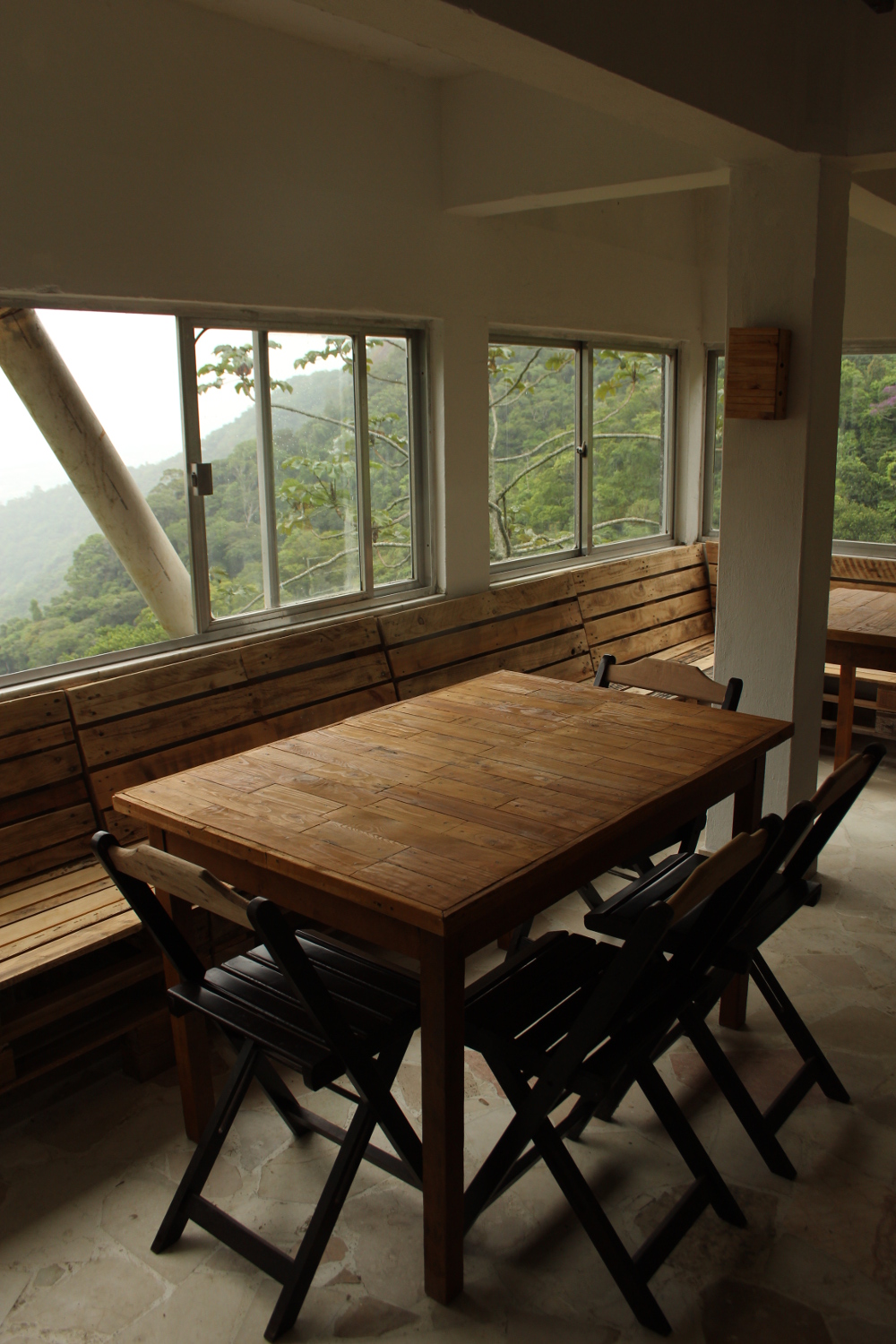 Ecological tours remain the Vale Encantado co-op’s strongest source of income. Otávio and another guide continue to give tours of the forest and are starting to receive guests in the upgraded co-op restaurant. Otávio and other co-op members have been working for five years to improve the restaurant space, and recently partnered with an architecture professor and students from UFRJ who provided the architectural design for the interior and deck of the restaurant. Co-op members are now finalizing implementation of these changes, which include new rustic design elements built and designed by Otávio.

Below the restaurant lies a biodigester that will continue to successfully transform the waste from the co-op restaurant into high quality fertilizer for the garden and methane gas to fuel the stoves. 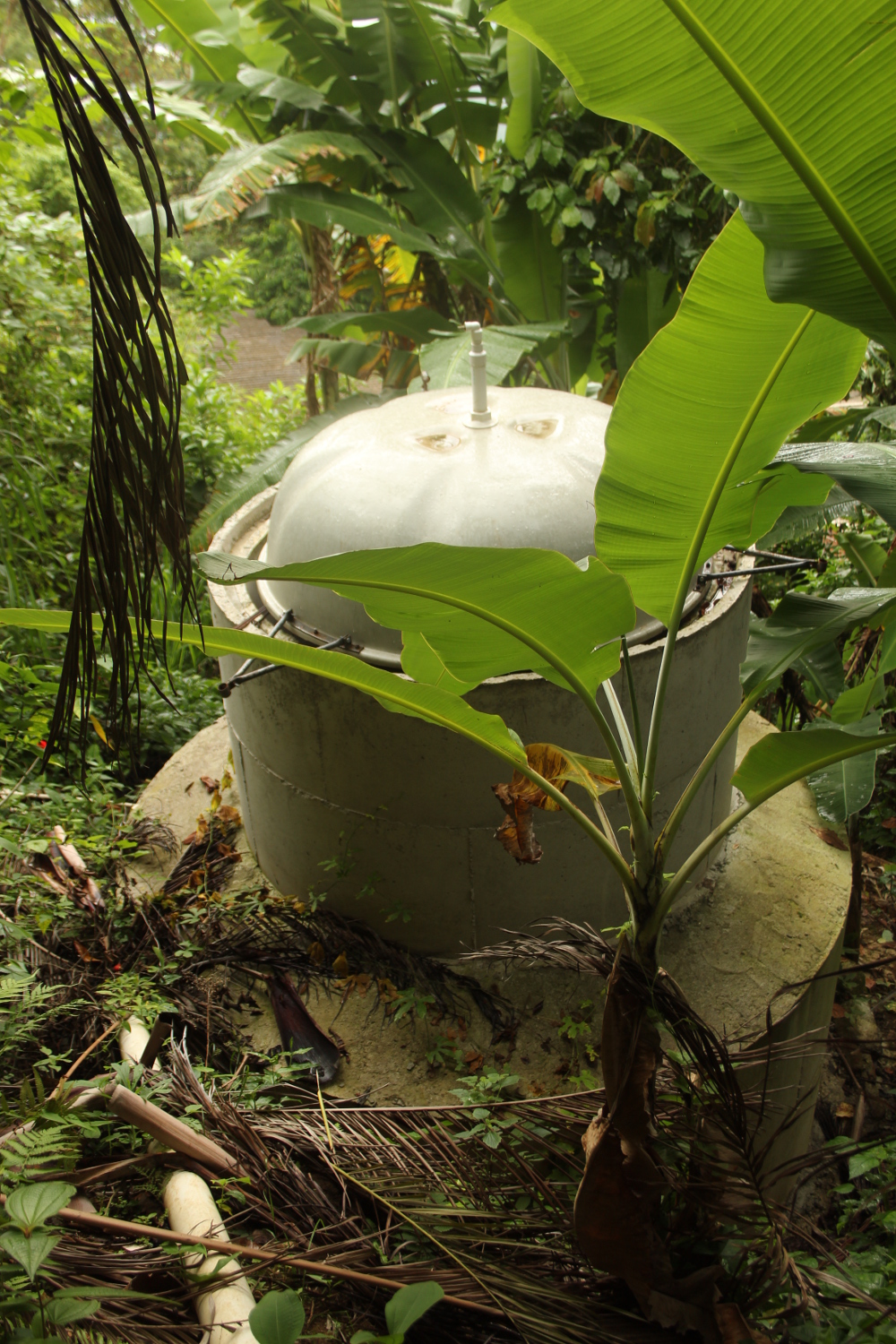 All of these initiatives and more are responsible for Vale Encantado’s growing worldwide recognition as a sustainable community. Its small scale and vocation for sustainability make it the perfect laboratory for incubating, developing, and showcasing sustainable practices that can be applied in favelas across Rio de Janeiro and elsewhere around the world.

The tours are high quality and prices are posted online. However, several tourist agencies are unwilling to work with the co-op because of this transparency, which leaves them no wiggle room to attach a hefty fee. As a result, most of Vale Encantado’s visitors learn of the community and its tours via word of mouth. Spread the word!

This article was written by Asha Nidumolu, and published on April 27, 2015.
in *Highlight, by International Observers, Favela Qualities, Opportunities to Support Favelas, Solutions, Sustainability