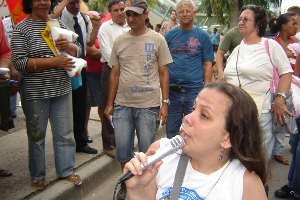 Sheila speaks to fellow protesters in front of City Hall, at the closing of the parade

On the morning of October 26th, 2010 a protest was held in Rio de Janeiro against the removal of favelas. Protesters marched from the Favela do Metrô to the mayor’s office. The removal of this community, in order to construct a parking lot for the the Olympic Games and World Cup, threatens 800 families. The march was attended by many community leaders, residents and merchants of the Metrô, Rocinha and Torre Branca favelas, as well as the Frente Internacionalista dos Sem-Teto (FIST, the Internationalist Front for the Homeless) and Catholic movements, such as Pastoral de Favelas and the Pastoral de Pessoas com Deficiências (the recently installed Pastoral for Persons with Disabilities).

The march was of a peaceful nature. Local police accompanied the protesters to ensure order, but an attempt to disrupt the march soon came. An unidentified white car infiltrated the march, but everyone was alert as usual. A photo was taken as evidence in case it should be needed.

Maurício, while taking a photo of the car’s license plate, was physically assaulted. A man exited the car and ordered him to produce his documents. However, this man was not in uniform and the car was not marked as a police vehicle.

Maurício immediately replied that he would only produce his documents if the man identified himself as a policeman. Without replying, the man physically assaulted Maurício. As a result, the protesters organized themselves and withdrew Maurício from the area and from the unidentified police officers. Making use of a megaphone, one protester announced that everyone should settle down and that the purpose of the manifestation was to plead their cause, not to fight. He also announced that the pre-arranged attempt was intended to cause disorder and disband the march. He asked everyone to not give up, but to continue to the mayor’s office.

The right to move freely
It is important to address the fact that many disabled people live in favelas, confined to their homes, with no means to come and go. These people do not even have the opportunity to claim their rights or plead their cause. Due to the lack of planning and revamping of the community, these underprivileged people cannot leave their homes to take care of their health, study or work. Living closer to public transport facilitates these opportunities.

The sites offered by the government only provide isolation. We wheelchair users must live in places with easy access, quality public transport and better living conditions. A study made in Parapan showed that from the North Zone to Barra da Tijuca, a wheelchair user spends more than 4 hours to get to his destination. Everyone is equal in rights and duties. We deserve better living conditions.

It is vital that we put an end to forced removals and offer equal access conditions to all of the residents and merchants. We must actively participate in the decisions that affect our lives. We have voices and it is necessary that we recognize our rights. We are here in search of better life quality: residents, merchants, Pastoral de Favelas, Pastoral da Pessoa com Deficiência, Conselho Popular, Human Rights, Defensoria Pública, Oscip and Guerreiros da Inclusão.

Sheila Melo is a business owner in Favela do Metrô. She is a coordinator with the Pastoral de Pessoas com Deficiência, in Rio de Janeiro, and also presides over the NGO Guerreiros da Inclusão (“Warriors of Inclusion”).

This article was written by Sheila Melo, and published on November 1, 2010.
Translation provided by Mason Hacker. This article originally appeared on Viva Favela. in #EvictionsWatch, #Rio2016, Event Reports, Solutions, Violations