On Thursday June 18, the Port Urban Development Company (CDURP) of Rio de Janeiro hosted a second  public hearing regarding a Participatory Housing Plan for the Port area, following an introductory meeting on June 10.

The event brought together an audience of about 150 people and was initiated by CDURP president Alberto Gomes Silva who presented a summarized version of last week’s diagnosis referring to a series of maps and tables developed by the municipal urban planning and data analysis agency Instituto Pereira Passos (IPP) and the Brazilian Geography and Statistics Institute (IBGE), responsible for the national census.

While pointing at a map comparing demographic density in different neighborhoods of the Port Area (map below), Silva stated that “the demographic density and the number of people who live in this region in relation to its size is small. It is therefore possible to bring more people to live here.” 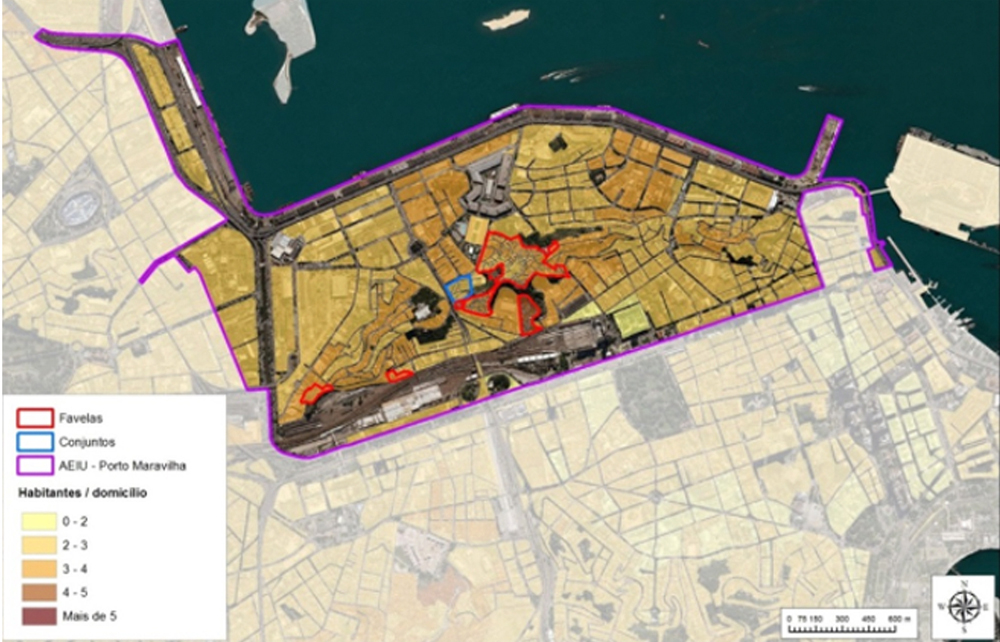 He presented different income groups (see below) saying that “the average income in the different areas of the Port zone varies between 0 and 5 minimum wages,” with the highest income group located in the southeast corner of the site, bordering Presidente Vargas and Rio Branco avenues. However, as shown by the land use map presented during the same session, this area is mainly a small commercial zone and the majority of residential zones in the port area find themselves in the lowest range, from 0 to 3 minimum wages. 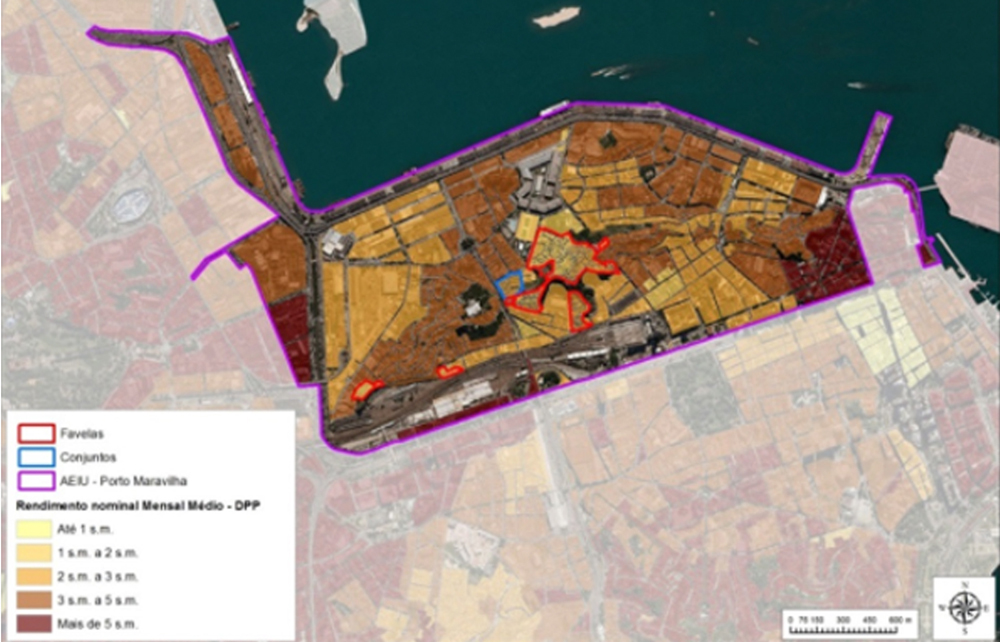 In response to a table by IBGE presented at the beginning of the meeting, stating that just about half of the port area’s population lives in rental accommodation, while most of the remaining percentage owns property, an inhabitant of Pedra Lisa explained that “for many years, the neighborhood has not seen any kind of construction. Now that it finally does, we are very concerned. What is going to happen to us? We pay rent, everyone pays rent here, and there are barely any owners among us. Everything is going to become beautiful and exclusive, for the rich. And at the same time, there is still no health clinic in the area.”

This meeting, the second of its kind to decide on a participatory plan for social housing in the area, was less well received than the first. This became noticeable when the speakers opened up to questions and comments from the audience, and several critical points were brought to light. Many inhabitants expressed concern regarding the growing pressure of having to leave the area, either directly, due to unexpected eviction notices, or indirectly, through uncontrollable increases in rent, which, at a certain moment becomes unaffordable for the predominantly low-income families, leading to an expulsion to the distant periphery.

Pedra Lisa is the most vulnerable area within Morro da Providência, economically and in terms of housing quality. The communities were officially declared Areas of Special Social Interest (AEIS), intended for the development of social interest housing programs for low-income families (with an income below six minimum wages). Their land is regulated by a special legislation set up under the initial decree for the Porto Maravilha port redevelopment project.

Orlando Santos Junior, urban planning professor at the Federal University of Rio de Janeiro (UFRJ), reveals that “by law, the Urban Operation was created with the justification of producing Social Interest Housing and it is therefore absolutely crucial that these projects be implemented as soon as possible.” He also mentions the large number of occupied “empty public and private buildings” in the port area, that could be used for social housing, as can be seen in some successful cases developed by the municipal program Novas Alternativas (New Alternatives).

He went on to say that “it is not just about building four walls. In addition to general data about the number of houses in the area presented today, more ‘day-to-day data’ should be collected and shared with the general public. We need clear information about land ownership in the area. The majority of existing households live in precarious conditions and it is fundamental to have access to information and know about the situation in order to develop adequate housing for all.”

Another professor mentioned a case from 2013 where only 1% of the entire Minha Casa Minha Vida housing development program in Rio de Janeiro’s Metropolitan Region, consisting of 73,000 units, was going to be built in the port area. “These 60 units are scattered all around the area. We need to be able to discuss public land, based on accurate data and information, to reduce this fragmented planning.”

The port area appears to be facing a never-ending struggle in securing land rights for its occupants, going all the way back to its slave history and the creation of urban quilombos. Today, CDURP and City Hall seem to be moving towards a long-awaited participatory plan for the area, which has been a legal requirement for the port area’s redevelopment from the start. The results of the process will be announced after the series of six public meetings when, in August, the publicly consulted document will be presented to the Municipal Housing Secretariat (SMH).

Remaining meetings will be held at CDURP headquarters on Rua Sacadura Cabral in the Port area on July 2, 9, and 30.

This article was written by Katja Majcen, and published on June 26, 2015.
in #ParticipationWatch, by International Observers, Civil Society, Event Reports, Solutions