For the original in Portuguese, published in Viva Favela, click here.

“Let’s quit this shooting all around us. This violence is killing residents, no one can take it any more.” This was a request made by Playboy, a drug trafficker from the Costa Barros favela in Rio’s North Zone in an audio file released last week. In it, Playboy proposes a ceasefire to Claudinho da Mineira from Morro do Chapadão. According to Playboy, the war has not been beneficial to either party. He says both of them are “being stubborn” by choosing to continue the battle. Although he does not ask for a truce, he wants the unnecessary shooting to stop. 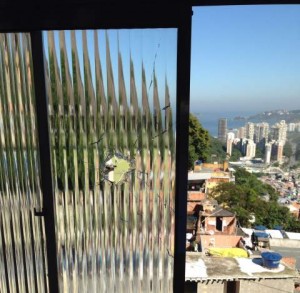 The bullet that hit a young boy in Rocinha came in through his window.

The clashes between the rival factions and between police and factions intensified in Costa Barros in January. Residents were so frightened that no one was comfortable speaking to Viva Favela about the current situation.

However, the rise in violence hasn’t only happened in the North Zone of the city. Many incidents of violence have taken place throughout the city since the beginning of the year, such as shootings in supposedly safe areas with the presence of Police Pacifying Units (UPPs), and knife assaults, such as the one that killed doctor Jaime Gold close to the Rodrigo de Freitas Lagoon, in the South Zone of the city.

News reports of these incidents have been enough to increase the feeling of insecurity among the population. Rio de Janeiro residents in particular have been demanding measures from the state, such as more policing and repression of crime. The approval of bill 435/15, which criminalizes the use of bladed weapons, with 61 votes in favor versus three votes against in the state assembly (ALERJ), further illustrates this trend. The bill now needs sanctioning by Governor Luiz Fernando Pezão. This should happen in the coming days.

In contrast to this new wave of panic across the population, data from the Institute of Public Security (ISP) show a decrease in violence in the state of Rio de Janeiro. The Commander of Staff, Colonel Robson Rodrigues, admits residents are scared, but adds that this past May has seen the lowest homicide rates since 1991. “Although the rates are still high, there has been a 32.7% decrease if compared to May 2014. In the Baixada Fluminense, for instance, homicides dropped from 177 to 119,” he said.

The fragility of the pacification process 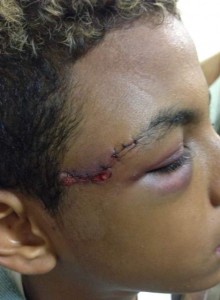 The bullet hit Wesley Barbosa in the forehead.

The ongoing security crisis shows the fragility of the Pacifying Police Units (UPPs) project, which has been discredited after the last incidents in Morro do Alemão, Morro do São Carlos, and Rocinha. Just last week there was a five-hour long shooting in Rocinha.

According to residents, policemen from the Special Command Unit (COE) occupied the favela and started shooting at the drug traffickers. They also reported that neither the local police station nor the UPP knew anything about the operation. During the shooting, 13-year-old Wesley Barbosa was hit in the forehead by a bullet that entered through the window of his house. His mother, Claudionora Barbosa, argued the problems generated by this kind of operation have not been solved even after pacification. “It didn’t work before and it doesn’t work with the UPP. They don’t plan anything,” she complains.

She also worries about the daily life of the community. “It doesn’t matter where the bullet came from. All it matters is that it hit my son. These constant shootings have created a huge evasion in schools and day cares in Rocinha. It is impossible that the local police station and the UPP didn’t know about the operation,” she said. “My son doesn’t want to live in our house anymore. He is unable to sleep at night. He had nightmares, cried a lot, and said he doesn’t want to live there anymore. This is the gift my family got from this disastrous operation,” she vents.

Despite the contradictory role of the police in the favelas, drug traffickers are still afraid of the arrival of the police command, as Playboy can be heard saying in the audio file. He explains that his, like other gang factions, has problems with the government and continuing the shooting might lead to more media attention, and consequently more policing. That would be prejudicial to everyone, he says: “Tomorrow the UPP will enter. That would be bad for both of us (gangs), here and there.”

The failure of the war on drugs

Colonel Ubiratan Angelo, Human Security Coordinator at Viva Rio, argues that Playboy’s audio file illustrates the current war on drugs needs to be discussed. “We can see even drug traffickers are starting to think in a logic of business rather than war,” he explains.

He says decriminalization is the way to avoid violent crimes. “With decriminalization, the question will shift to inspection and regulation. This would put an end to the war between rival gangs and between these gangs and the police. They understand it is better to have a trade dispute than to dispute for space for violence and drugs,” he guarantees.

On July 6, Rocinha residents will meet the Human Rights Commission of the Rio State Legislative Assembly (ALERJ) together with education, social and rights institutions to discuss the question of security and the schedule of police operations.

This article was written by , and published on June 28, 2015.
Translation provided by Luana Gama. This article originally appeared on Viva Favela. in #UPPWatch, Policies, Solutions, Translated by RioOnWatch