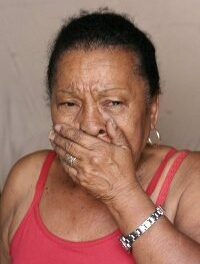 Devastated, as the home she built is destroyed by City workers

4th November 2010–This week residents of Favela do Metrô-Mangueira, close to Maracanã football stadium, awoke to the arrival of removal personnel and demolition crews from the Prefeitura of Rio de Janeiro, who had come to evict them from homes. By today, at least two dozen homes have been cleared, their windows and roofs smashed in and the process ground inexorably on.

The evictions and destruction had no discernable pattern, it was simply random stabbing across the neighborhood. The stress was evident, many people just sat listless in the heat, waiting for their turn, not knowing whether it would come today, next week or next month.

It is generally understood that the neighbourhood is being cleared to make way for a car park that will support Maracana stadium during the world cup and Olympic games. The city however, typically uses a pretext of public health and safety concerns as justification for the evictions. The hypocrisy of this ‘concern’ became abundantly clear when the removal process began. 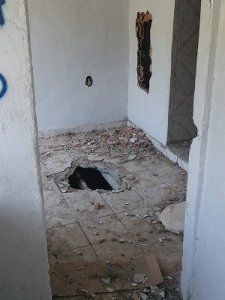 Houses are damaged to prevent re-occupation

Once a family is evicted, the house is damaged by the city workers to prevent reoccupation. No effort is made (meaning no money spent) on proper demolition, boarding, warning signs or even perimeter tape. The house is just left open for anybody to wander into including children and desperate people needing some kind of shelter. There is steel reinforcement sticking out, holes in upper story floors, sagging roofs, loose wiring and buildings left in such precarious states that they could collapse at any moment. Furthermore the rubble is left where it lies, blocking drains, collecting stagnant water and providing homes for pests and vermin. It is a cruel and deliberate tactic. It is the Prefeitura who is making the neighbourhood unsafe, unsanitary, unbearable.

Residents of the favela claimed that an offer had originally been made to move them a short distance up the road, many responded that this was an undesirable but at least acceptable choice. They also claimed that they had been offered a R$400 per month stipend for three months to help with the costs of relocation. The stipend it seems has already vanished and now the residents are being bussed out to Cosmos, a peripheral suburb on the very edge of the city, far, far away from everything they have ever known. 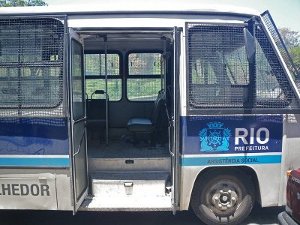 I asked one woman, looking forlornly around a now bare room if this was her home and as she quietly broke down she simply said “It was”.

Samuca serves as a volunteer photographer at Catalytic Communities.

This article was written by Sam Faigen, and published on November 5, 2010.
in #EvictionsWatch, #Rio2016, Violations