For the original article “When Will Society Start Listening to the Favelas?” by Mujica Salinas in Portuguese published by Mídia Coletiva click here.

The post, which deconstructs the discourse which says that “the only good criminal is a dead criminal,” caused the Independent Media Collective’s social network pages to be blocked for two hours. 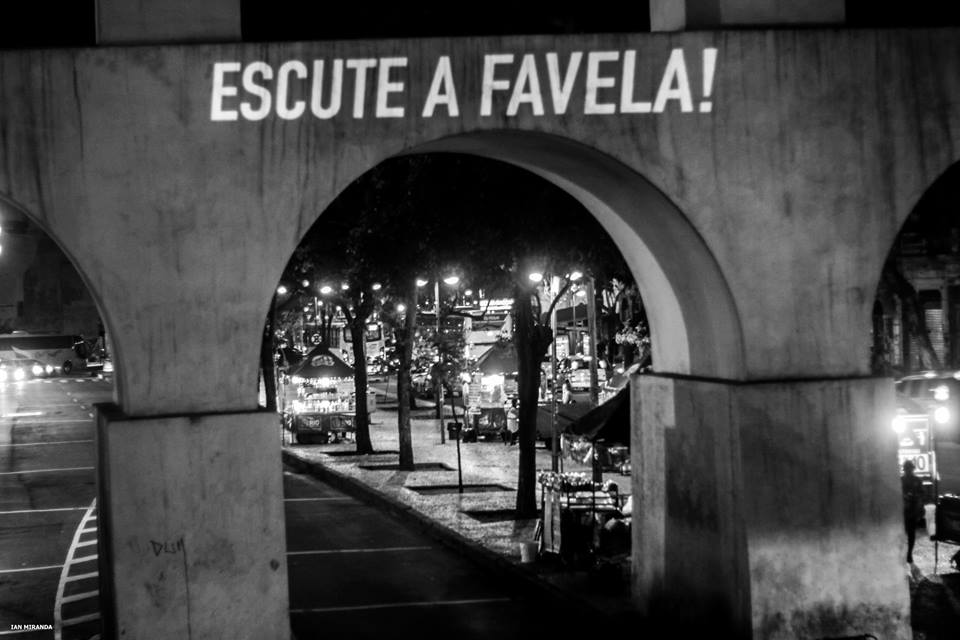 “Listen to the Favela!” Art from the “Projection Collective” and photo by Ian Miranda – Grito Filmes

The writer uses a brilliant eschatological discourse, building his narrative through a series of shocking situations which occur daily in the favelas and are dismissed in the day to day runnings of the government, institutions and mainstream media.

Facebook restricted access to MIC’s page, the independent group that published the text. Facebook only retracted this after being served notice from efficient lawyers from the Mariachi group who act in the defense of popular communicators in Rio de Janeiro.

According to information collected by our reporters, activist and writer Anderson Dinho suffered threats after the big controversy. Last month, independent media group Mariachi’s page was also taken down, serving as an attack on the freedom of the press–and once again igniting this furor was Facebook.

The actions, or aim, of this group are considered to be “the voice for those at risk.” The persecution of independent media collectives intensified after a report by Mariachi showed State Security Secretary Beltrame in a t-shirt printed with “Por um Rio Sem Barreiras” (“For a Rio Without Barriers”), but the actions of his team of men that day couldn’t have been more juxtaposed to Beltrame’s motto. That day we witnessed an unprecedented scandal when police acted as if out of the film Minority Report, blocking any black or less wealthy person from getting to the beaches in the South Zone under the directive that they “would” carry out mass robberies.

Now, we launch a new era in our popular media. We are no longer bound by social media that censors the actions or words of the vulnerable. Midiacoletiva.org has opened possibilities for us to directly and publicly communicate with frankness and security, without being censored.

Below is [a translated version of] the piece by Anderson Dinho:

You know I rarely speak of Public Safety because I have no clout for it but,
WHY DID RODRIGO PIMENTEL ASK TODAY IN GLOBO NEWS “WHERE ARE THE NGOs TO CRY OUT FOR THE POLICE OFFICER WHO WAS BURNT ALIVE?”
?
It’s not the role of any Rio NGO, Rodrigo, to protest for the police, EVEN THOUGH they understand the fair play of this. Ok. What you meant to say was:
“WHERE IS THE CONCERN FOR THESE GUYS HEY?”
The concern is stuffed up their rears, my son.
They don’t care, Rodrigo. There’s no concern with THIS police force.
And when I say THIS FORCE, I don’t refer to a UPP or a battalion, it’s the INSTITUTION that for years has lived, drained by internal and external corrupt agents.
It’s bigger than just one arm.
It’s a culture. It’s a construct. A project of power.
They didn’t care when two policemen dragged Cláudia, dead but bound by trousers, into a car? They didn’t care when a BOPE agent called 10-year-old Eduardo a bum on his own doorstep and shot him. They didn’t care when the three officers killed a guy and forged a crime scene, placing a gun in his dead hand.
They don’t care.
They exploded the quota for sensitivity so there’s none left available when they come asking for a reaction.
NGOs are the response of civil society, in many cases organized TO PROTECT PEOPLE FROM THE POLICE.
This slack police force, badass cops, dirty cops, who do spot checks with their rifles in your face just to get R$10. This police force having BBQs in jails. This militia police. This police force who get their cut every Friday. Who organize at the Legislative Assembly. Who organize with the courts.
Huh? Speak up.
The voiceover actor of that nerdy trilogy will die and there’ll be guys burnt, yep. And if you complain, more will die.
It is not the fault of a society “defender of criminals.”
And there won’t be any NGO crying. I, Dinho, I cry over the deaths of those I love. No resident ever signed any government document submitting to understanding the risk in the profession of being a resident. You did.
Residents die from stray bullets during operations where the criminals are NEVER found.
Police know the risk. They’re in this with awareness.
You really think I don’t have friends and relatives in this?
You really think they think about this here?
With guns pointed out, you all think you’re Superman.
Whether you’re a woman, whether you’re a man.
They become ironchested.
Another time, one of you was staring at my wife from inside the car, bitching and degrading her.
With me there, alongside.
Tell me.
For whom do you cry
It’s fairplay that you want?
In Rio, you want fairplay?
Your pastor harms you and you beg for the help of your holy father? What schizophrenia is this, man?
NGOs were created to cry over other deaths. EVEN THE HOMELESS. But not yours.
You have to go to the governor. Where are you, Luiz Fernando Pezão? Where are you, Beltrame? Was it not you that put these guys in the street? Is it not you that train them and pay their low salary they earned to die, burned? Is it not you that are so lost and call the DEA to resolve the mess?
Rio’s Public Security is so broken. Has been for decades.
Decades.
You have to stop seeking society’s reaction, because if they could, society would never see a Police like this again. You are the bad guys.
Go cry in the PMERJ (Rio Military Police).
Blackmail the commander. Go to the Lieutenant-Colonel. Go to the chief. Bribe them. Go on strike. Take your family, wife, son, take everyone, let them threaten you with exoneration, FEEL DEEP IN YOUR SKINS HOW IT FEELS TO BE THREATENED BY THE MILITARY POLICE, because it is with them that you need to resolve this, not with society.
Invade the Guanabara Palace and blackmail Governor Pezão. Invade Central and bribe Beltrame.
Damn!
I didn’t want the guy to die.
But I cry for the deaths of people from here, get organized, damn it, so no one else will die.

This article was written by Mujica Salinas, and published on November 10, 2015.
This article originally appeared on Mídia Coletiva. in #UPPWatch, by Community Contributors, Opinion, Translated by RioOnWatch