The body set up to investigate human rights violations of the military regime says the militarization of daily life and forced removals of residents are practices of the past that are being repeated today.

“We were thrown out of these communities [Favela da Praia do Pinto, Ilha das Dragas and Ilha dos Caiçaras] like animals. The government, the Military Police, and COMLURB were throwing our things onto garbage trucks, crowbarring and sledge-hammering houses down.” With these words, Altair Guimarães narrated his experience, at just age 14, of forced removals during the civil-military dictatorship (1964-1985) to the Rio de Janeiro Truth Commission (CEV-Rio).

CEV-Rio was established by state law 6.335/2012 to investigate the severe human rights violations that occurred under the regime and to support the work of the National Truth Commission (CNV). After two years and eight months of work, the commission submitted their Final Report to the State government in a ceremony at the Guanabara Palace on December 10, 2015. Governor Pezão cancelled his participation in the event at the last minute. At the event, their new website was also launched, where the report and other supporting documents can be accessed.

Like the other measures adopted by the Brazilian State to address the human rights violations of the period, the CNV was created with very clear boundaries. After a rocky start, the commission was able to find the peace to work and advance–albeit timidly—on certain points. It had the great merit of putting the theme of the dictatorship at the forefront of public opinion near the 50th anniversary of the coup. However, its final report was submitted to President Dilma Rousseff–herself a former political prisoner–prior to identifying the fate of the hundreds of victims of forced disappearances.

This was not the only oversight of the CNV. Many people spoke about how the commission just reaffirmed a certain view of the dictatorship: that the only victims of the regime had been political militants of the armed left–in the majority, men, white, and from the middle or upper class. Although a small breakthrough in the field was made by dedicating some chapters of the report to violence committed against certain sectors of the population such as LGBT, indigenous and urban and rural workers, the National Truth Commission had no power to change the commonly held profile of victims of the dictatorship.

However, some state commissions have focused more closely on these aspects. In this context, CEV-Rio sought to commit to an investigation into State violence experienced by Rio’s favelas during the regime. To this end, they collaborated with historians Juliana Oakim and Marco Pestana. After collecting statements from victims and analyzing hundreds of pages of documents obtained from the Rio de Janeiro Public Archives and the National Archives, the researchers produced an article that supported a chapter of the State Truth Commission report on the subject. In the document, CEV-Rio states that the human rights violations in the favelas during the dictatorship were structured through two arcs: forced removals and State military presence in the daily lives of residents.

The dictatorship and the project to eradicate favelas

Between 1962 and 1974, more than 140,000 people were forcibly removed from their homes, especially in areas that were becoming more attractive to the housing market like Lagoa Rodrigo de Freitas and Leblon. The policy of systematic removals was implemented with the approval of governor Carlos Lacerda–one of the principle organizers of the civil coup–even before the dictatorship. Then in 1968, with the creation of the Coordination of Social Interest Housing in the Metropolitan Area of Rio de Janeiro (CHISAM), a federal body under instruction of the Ministry of the Interior, the dictatorship began to lead the process, guaranteeing resources, political power and the unrestricted use of repression to enable it. In this context Altair Guimarães explains how they were removed from Lagoa Rodrigo de Freitas and transferred to City of God in Jacarepaguá. “The area had no infrastructure, it was just wasteland. Me and my friends were separated, some sent to Cordovil and others went somewhere else. I had a really awful time during my adolescence moving from one place to another,” he explains.

The removals did not happen without resistance from residents. CEV-Rio found original documents which confirmed the arrest of leaders from the Federation of Favela Associations in the State of Guanabara (FAFEG) who organized to fight the removals process. In an emblematic case, residents from Favela do Esqueleto who were threatened with removal just months after the coup organized a referendum in the community to show the authorities that people wanted to stay. Etevaldo Justino, then president of FAFEG, was arrested and accused of “subversive activism” in the favelas. After this repression the removal took place and thousands of residents were driven out of the area that is now home to the Rio de Janeiro State University (UERJ).

With the decree of Institutional Act 5 and the intensification of political repression, more leaders were arrested and neighborhood associations suffered more intervention from the dictatorship, clearing the way for an increase in forced evictions. And so the period between 1968 and 1974 saw about 90,000 people evicted. At the time, arson increased in favelas–the most striking was the one committed in Favela da Praia do Pinto, leaving thousands homeless and accelerating the removal of the community. José Fernandes transferred from a favela in Botafogo to one in Cidade Alta, and now lives in Rocinha. He expressed how it felt at the time: “The removal of the Santa Terezinha community was done quietly, there was no revolt, nothing, because there was no way to protest, a huge number of police officers arrived. It was the height of [the dictatorship] at that time, so there was no riot. Our house was a wooden shack, so once the last occupant came out, they set it alight. At the time there were patrols, police cars, and a lot of police.”

“Intensify raids on the favelas” 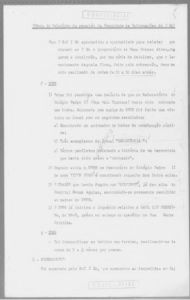 Minutes from a meeting held in 1971: “Intensify raids on the favelas, carrying out the order 3-4 times a week”

Among the documents found by CEV-Rio were the minutes of a meeting held in 1971 of representatives of the organs of repression. Among reports about the capture of so called “subversives” and discussions about strategies for the regime to repress the opposition, the representative of the Military Police of Guanabara State claimed he would “step up raids in favelas, carrying out this order 3-4 times a week.” From this, the commission concluded that the violations committed in favelas by the regime were known of by “the top hierarchy of the dictatorship” and were far from being “isolated cases.” Most recorded among these acts of violence were raids, arbitrary arrests, destruction and violent thefts at neighborhood association buildings, and home invasions without warrants.

Fernandes also reported how things were under the militarized presence in the state: “They came into our community with the view that ‘everyone is a criminal.’ Some came to patrol around, some raided the hill; they all came in with military support. They came down with people tied up like on a fishing trawler, all tied on the same rope being led down the hill. And whenever it got to 10pm wherever you were, you had to run from the police. If you didn’t run…well after 10pm, they would detain you and if you were stopped on a Friday night, you wouldn’t get released until Monday.”

According to CEV-Rio, the motivations of the dictatorship to suppress daily life in the favelas were two-fold: on the one hand, there was the stigma that these areas were prone to criminality; and on the other, the intensification of anti-communist rhetoric exacerbated the fear that “favela residents could act as a large support base for a communist revolution.” In this context, the militarization of the State, the transformation of Military Police into auxiliary factions of the Army, and the guarantee of impunity for public agents involved in human rights violations resulted in an increase in violence against the favela population.

In some cases, even after eviction, residents continued to suffer from police violence. José Fernandes told the commission that whilst living in Cidade Alta he no longer feared removal but now feared death squads—like Invernada de Olaria—and the repression of black music and dance events carried out on the urban periphery. “I can clearly remember that we were coming out of a dance and there were naval police surrounding the area,” he said, telling of a time when he was arrested at the exit of one of the dances. “They ran and came after us, capturing our group. I had a big afro and those guys cut our hair, leaving us all bald. They took us to the barracks and put us in cold showers. We had to stay there until the next afternoon. [It was] the end of the 70s, we were demonstrating an end of the dictatorship in our dances, equality. The Black Movement was discriminated against. Various times, our dances would have Army Police presence. It was dangerous; we would go out not knowing if we would come home, or if we would be going to jail, or what might happen.”

One of the legal attributions of Truth Commissions is to identify patterns of human rights violations in order to make recommendations to prevent their repeating. CEV-Rio dedicated a chapter of its Final Report to the current violations being perpetrated by the State: both the day to day police violence that favela residents experience and the forced evictions taking place to make way for mega-events in Rio de Janeiro were analyzed by the body.

From the point of view of the repetition of tortures, forced disappearances and summary executions, CEV-Rio was categorical in stating that “the main issue with the militarized perspective of public security is an understanding that there exists a potential internal enemy which becomes the target of the war machine.” This potential enemy, according to the commission, has a new specific profile: young people, in the majority black and poor, living in urban peripheries and favelas.

In regards to evictions, the commission concluded: “In repeating practices similar to those undertaken by the military dictatorship, the State continues to violate the right to housing for thousands of citizens.” As in the past, the government is using force, violence and undemocratic methods to clear spaces of interest for real estate speculation. Emblematic of these repetitions is the story of Altair Guimarães, who is now president of the Vila Autódromo Neighborhood Association and is reliving the threat of forced removals: “I did not want the children of this community [Vila Autódromo] to go through the same things I did, but unfortunately I didn’t succeed. [In the past] they didn’t respect children, they didn’t respect the elderly, and it’s no different today. The exact same thing that happened during the dictatorship is happening today.”

Lucas Pedretti is studying for a Masters degree in History at PUC-Rio, and was an assistant with the Rio de Janeiro Truth Commission.