A stormwater system is infrastructure designed to slow down, harvest, and relocate excess rainwater in order to prevent flooding or other damage caused by large volumes of water collecting in a given area. In addition to mitigating negative impacts, stormwater systems offer opportunities for the sustainable collection of rainwater for purification and use. Systems consist of both micro-drainage, or the way city streets collect and move rainwater, and macro-drainage, the larger network of drains, canals, dikes, and rivers.

In Rio de Janeiro, traffic-stopping and life-threatening floods due to recent heavy summer rains have highlighted the inability of the city’s stormwater systems to cope with the amount of precipitation. As Rio stands to be the South American city most affected by climate change over the coming years, the intensity and frequency of storms are only likely to increase, exacerbating the existing dangers associated with floods.

As ironic as it may be given the city’s notoriously limited sewerage services today, Rio de Janeiro was actually the third city in the world to have a system of sewers. In 1857, under Emperor Dom Pedro II’s reign, contracts for both a sewerage system and a drainage network were signed with Brazilian companies and British engineers. Previously, the sewerage “system” had consisted of slaves carrying waste from city homes to dump it directly into the surrounding waters at night.

Even with the new infrastructure in place, however, sewerage and draining remained sources of severe issues as Rio continued to grow quickly with little planning. A lot of construction took place between lakes and marshes on flat lands below sea level, where frequent flooding occurred during the seasonal rains and the drainage system proved insufficient. This pattern of drainage infrastructure struggling to keep up with city growth continued for much of the 20th century.

After decades of continued damage resulting from floods, Rio’s 1992 City Plan called for the creation of a municipal body to manage rainwater, sewage and sanitation systems. Accordingly, the Rio de Janeiro Municipal Water Institute, also known as Rio-Águas, was established in 1998. Since then, the City has been developing plans for the macro-drainage of all river basins in the municipality of Rio. As an example, work on a macro-drainage system for the Sepetiba Basin Work began in 1993 and was designed to combat flooding in the neighborhoods of the West Zone. There are 25 rivers and canals included in this project, with a total length of 144km.

At the present, Rio is building its largest tunnel for rainwater in São Cristóvão, in the North Zone. Currently, five rivers flow into the Mangue Canal and when heavy rainwater is added to the mix, severe floods occur in the Praça da Bandeira area. The new tunnel will divert some of the water in alternative route directly to the Guanabara Bay, reducing the flooding in the Praça da Bandeira area. 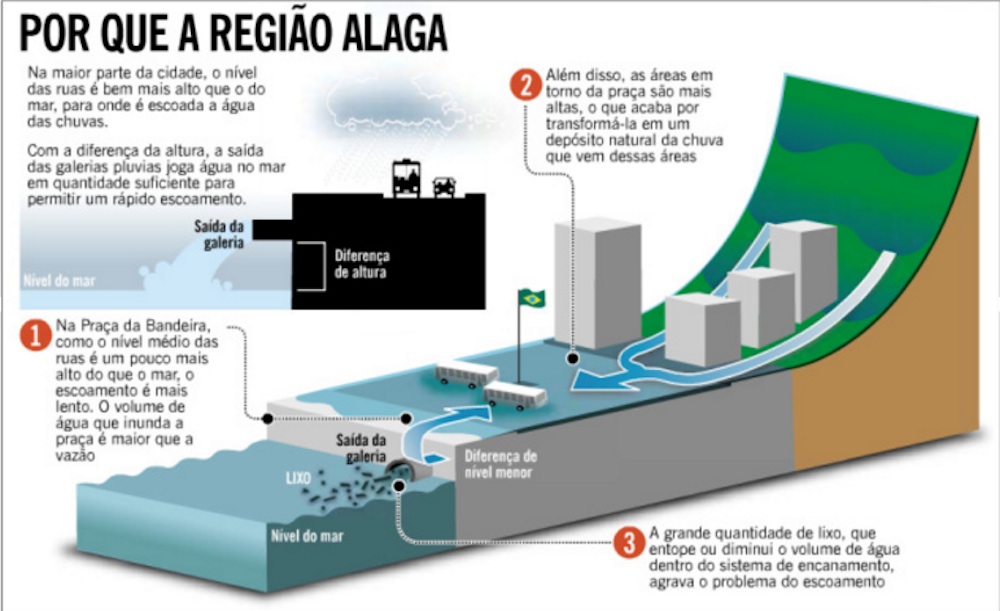 Rio’s sewerage and drainage systems are simply outdated. They are not constructed to withstand the amount of rainwater accumulating on the ground above; nor were they built to withstand the immense amount of trash that is washed away with the floods. The pipes that lead to the bay and ocean are often clogged with this trash and other debris, leaving the groundwater from the rains stagnant, taking hours to drain. The elevated mountainsides that surround Rio pour stormwater freely into the streets and buildings below, wreaking havoc on the daily routines of thousands of people.

The intense rains leave the streets, sidewalks and even some buildings flooded, and people can be left stranded for hours, sitting in their cars, at restaurants, or at their workplace waiting for water levels to lower. Not only are buildings and vehicles structurally damaged, but businesses’ revenues are also greatly impacted as a result of the flooding. Trash and other debris clog and slow the flow of water through the existing plumbing that leads directly to the Guanabara Bay and ocean, while overflows bring the same untreated sewage up onto the streets.

Young children and the elderly are particularly at risk of injury or drowning, because of the quickness and intensity of the rains. On March 12, 2016, four people were killed in heavy rain and flooding as Rio authorities declared a state of crisis. Residents of the North Zone areas with new resevoirs to mitigate flooding expressed anger at the continued floods, but Mayor Eduardo Paes clarified that construction of the infrastructure was still in progress. Landslides occur frequently in areas lacking the proper building foundations and drainage systems. The hillsides of Rio are most vulnerable, like in Pica Pau where some people’s homes are literally on the verge of collapse. In Pica Pau, a community in the North Zone district of Cordovil, residents are witnessing nightmare conditions in which their stormwater drainage and sewage systems are reaching and infiltrating their potable water supply. These unacceptable conditions have seemingly been ignored by the City.

Viable improvements to the current system:

Right now the current system is failing to keep the streets dry, but efforts are being made to improve. There are five different reservoir systems being implemented in the Tijuca region, linked to the aforementioned São Cristóvão tunnel. These reservoirs will take in water when the rains cause rivers and canals to rise, and hold the water until the water levels are low again, then return the water back to the rivers and canals. This project has been framed as a legacy project of the Olympics, as highlighted by this video below.

Other viable options for the city of Rio de Janeiro could be rain gardens and bioretention ponds. These options offer eco-friendly solutions to collect rainwater and return water back to the earth, mimicking the earth’s ecological cycle, which is much more sustainable than simply directing all of the rainwater to outlet points in the ocean or bay. These types of projects can offer a new aesthetic for Rio’s vibrant scene, and create educational opportunities around environmental sustainability.

Although communities can create small-scale water collection or diversion projects, the scale of the city’s flooding challenge is substantial and will require the City to construct correspondingly substantial infrastructure, for both drainage and sewage. While the City may have missed the opportunity to fully revamp both systems ahead of the Olympics, it should still be considered an urgent priority for the winner of this year’s mayoral elections. The city’s infrastructure and people’s lives depend on it.

This article was written by Hammond Sale, Sabrina Norris, and published on April 1, 2016.
in by International Observers, Research & Analysis, Solutions, Sustainability, Understanding Rio