It sometimes appears that in Rio de Janeiro, the Olympic Games have already begun. Rio has been making headlines for its preparation for the Games, crime mitigation procedures, the onset of favela policing or the economic-employment boom. While these topics are newsworthy, there is another less-publicized subject that has been affecting many Rio residents at home—literally. Over the past year and a half, forced evictions of entire communities and subsequent building demolitions have cleared space for roadways. Next in line for eviction was the community of Vila Autódromo, a 40-year old working class neighborhood occupying land adjacent to the future Olympic Park. Despite earlier reports from Brazilian news source Globo of its eminent removal, however, Vila Autódromo has recently won a small yet symbolic legal victory. 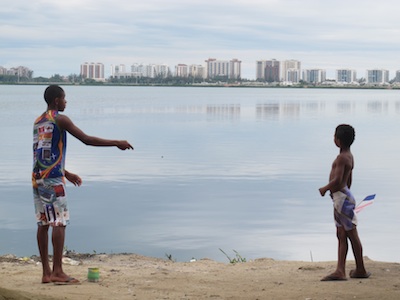 Vila Autódromo is a former fishing colony situated in southwest Rio and occupied long before high-end condominiums dotted the landscape nearby. It is relatively small, with just over 900 families (a total of approximately 4000 residents), and is categorized as low- to middle-class. The neighborhood is a favela. Despite the common English translation, this does not mean a slum. The favela distinction refers to neighborhoods that are unserved by public works. After an initial period squatting, they are constitutionally granted the right to land titles, though these are rarely given. Vila Autódromo bears its name because of its proximity to Rio’s main racetrack, which is also due to be relocated prior to the Games.

Because of residents’ commitment to stay and their historic resourcefulness in organizing, Vila Autódromo has become a symbol of resistance, a stronghold that could set precedence in future developments and bolster resistance to evictions across the city. Some favelas, like Rocinha, have also been making international headlines. This is different. While Rocinha was injected with a new Police Pacification Unit (UPP) to help crack down on crime, and is set to benefit from increased investment and accessibility, Vila Autódromo and others are to be evicted and demolished.

This is all too familiar for the peaceful West Zone community. In 1990, Vila Autódromo was threatened but won recognition of their land rights and was legally deemed a Special Zone of Social interest, which brings with it certain rights and protections. The State government, which owns the land, gave the community a 99-year concession to occupy, or title, just as it allowed the City government to operate the next door racetrack. Even so, in preparation for the 2007 Pan American Games, the area faced threat again. Then once again residents managed to resist and maintain autonomy. One might think the neighborhood would have immunity given these two prior victories. Unfortunately, this is not the case.

Does Vila Autódromo need to go? 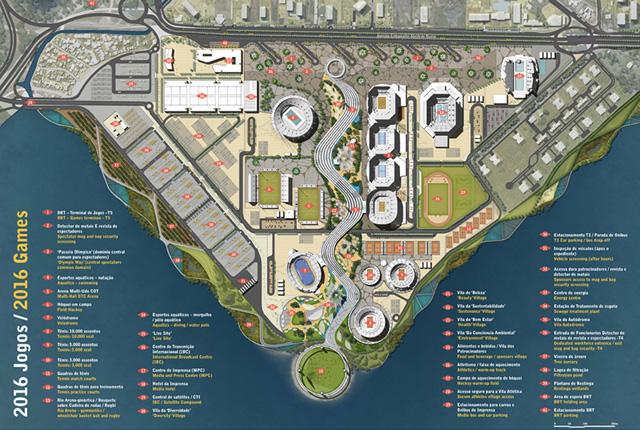 The latest images of the proposed Olympic Park project, prepared by the winning firm AECOM and issued in August 2011, also maintain the community in place in the 2016, 2018 and 2030 projections for the site. Maintaining the community in place would in fact be easy to do, and far cheaper, than any alternative. Comprised of only 11 streets and solid houses on large plots, upgrading Vila Autódromo and integrating it into the Olympic project would clearly be far less expensive than the R$80 million price tag the City has placed on its resettlement.

Yet in September, one month after the AECOM images were released in the press, the plan for the Public-Private-Partnership (PPP) to develop the Olympic Park was unveiled, and opened to public scrutiny. This plan included the redevelopment of the site currently occupied by Vila Autódromo. According to the PPP, the City will provide the land (currently occupied by the racetrack, Vila Autódromo, and a small airstrip) plus public infrastructure for the future Olympic Park, in exchange for a winning private sector bidder building the Olympic Park infrastructure in time for 2016. The winning bidder will then profit from private upscale housing developments on the site following 2016. Note that the site is located on a triangular peninsula inside the scenic Jacarepaguá Lagoon which will be cleaned of pollution by the Olympics—some of the most valuable land in the city.

Following the September-November public comment period, the City publicized the final PPP contract and launched a call for proposals for private sector bidders. It was at this point that the community of Vila Autódromo organized the legal response that resulted in a ruling in their favor last week. 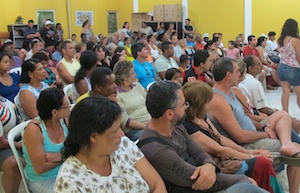 The Vila Autódromo Residents’ Association, State Public Defenders, planners from the Federal University of Rio, and a handful of city councilmen joined forces when they saw that the City’s call for proposals did not include any mention of the resettlement of Vila Autódromo. It had been established during the public comment period on the PPP proposal that the community’s resettlement would be the winning consortium’s obligation. Yet the actual contract omitted this detail, leaving the community’s fate uncertain. The legal aid group thus filed an injunction asking to postpone the bidding process until these issues were clarified. Last week, the judge accepted the request and ordered the suspension of the bids. 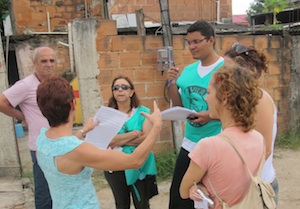 This is an important victory for Vila Autódromo, albeit a temporary one. The win serves as a symbolic example to all parties involved that there is a protocol to follow. It provides the community with more time to organize and call attention to the City’s improper handling of the situation and disregard for resident rights. The community is preparing an alternative plan with help from the Federal University of Rio’s city planners. Residents are also working with public defenders to register residents committed to staying. Vila Autódromo’s organizing has also created a social model for other communities, demonstrating how to build an effective network and how to handle developers, City Hall and solicit public defense.

Yet ultimately the fate of the community continues to be uncertain. What is certain is they will not agree to relinquish their land and move without a fight, and without approved relocation provisions. For the record, most residents do not want to leave and will have to be convinced to do so, legitimately, rather than through the intimidating techniques used to date [click for English subtitles].

The relocation site originally planned would be less than a mile away, but it presents another series of ethical and environmental problems. According to news source Estadão, the City bought the land for R$19.9 million from Rossi Residencial and PDG Realty, two major contributors to Paes’ mayoral campaign in 2008. The sale completely skipped the legally required public land acquisitions bidding process. Rossi and PDG are both constructing new developments near Vila Autódromo, and could stand to see their property values rise as reported recently in the Rio Times. 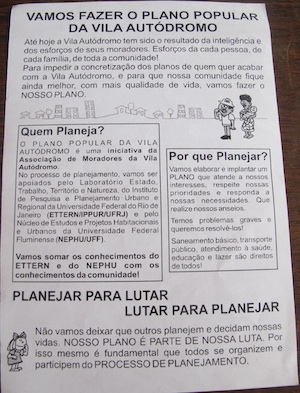 An alternative project for the community would be the upgrading and regularization (legal and physical) of the favela which would integrate the community into the Olympic Park project, and would not necessitate removal. An activist involved in the battle suggests, “this possibility is totally out of the question for the Mayor and his allies, but it is the most fair from a social point of view. It is also more economical, because it would be much cheaper than the proposed resettlement.” This same activist asserted that the Mayor and associated parties are not interested in the possibility of a lower income community alongside middle-class condominiums being built in this area of the city. This mindset has already led to the removal of other communities and still may lead to the end of Vila Autódromo.

The removal or survival of Vila Autódromo has become a matter of principal for all players involved. While principal remains important, this is ultimately a matter of uprooting a community and destroying the residents’ homes, which represent nothing short of decades of hundreds of families’ invested earnings and combined efforts.

This article was written by Christa Hall, and published on January 27, 2012.
in #Rio2016, by International Observers, Violations