Built to house the residents removed from Vila Autódromo and costing R$105 million (US$30 million), Parque Carioca has been used extensively by Mayor Eduardo Paes’ administration as a model example of the Minha Casa Minha Vida public housing program. However, many residents of Vila Autódromo have long resisted the transplantation of their community into this public housing complex and conditions do not reflect the administration’s rhetoric.

Even until recently, Mayor Eduardo Paes has insisted that all residents who left Vila Autódromo were happy to leave and the 341 families relocated to Parque Carioca are happy with the management of the housing units. During an insightful recent interview with The Nation‘s sports journalist Dave Zirin, Paes said, “Let’s go to the condominium where most of them moved to and you’re going to see if I’m popular there or not; if they are happy or not.” 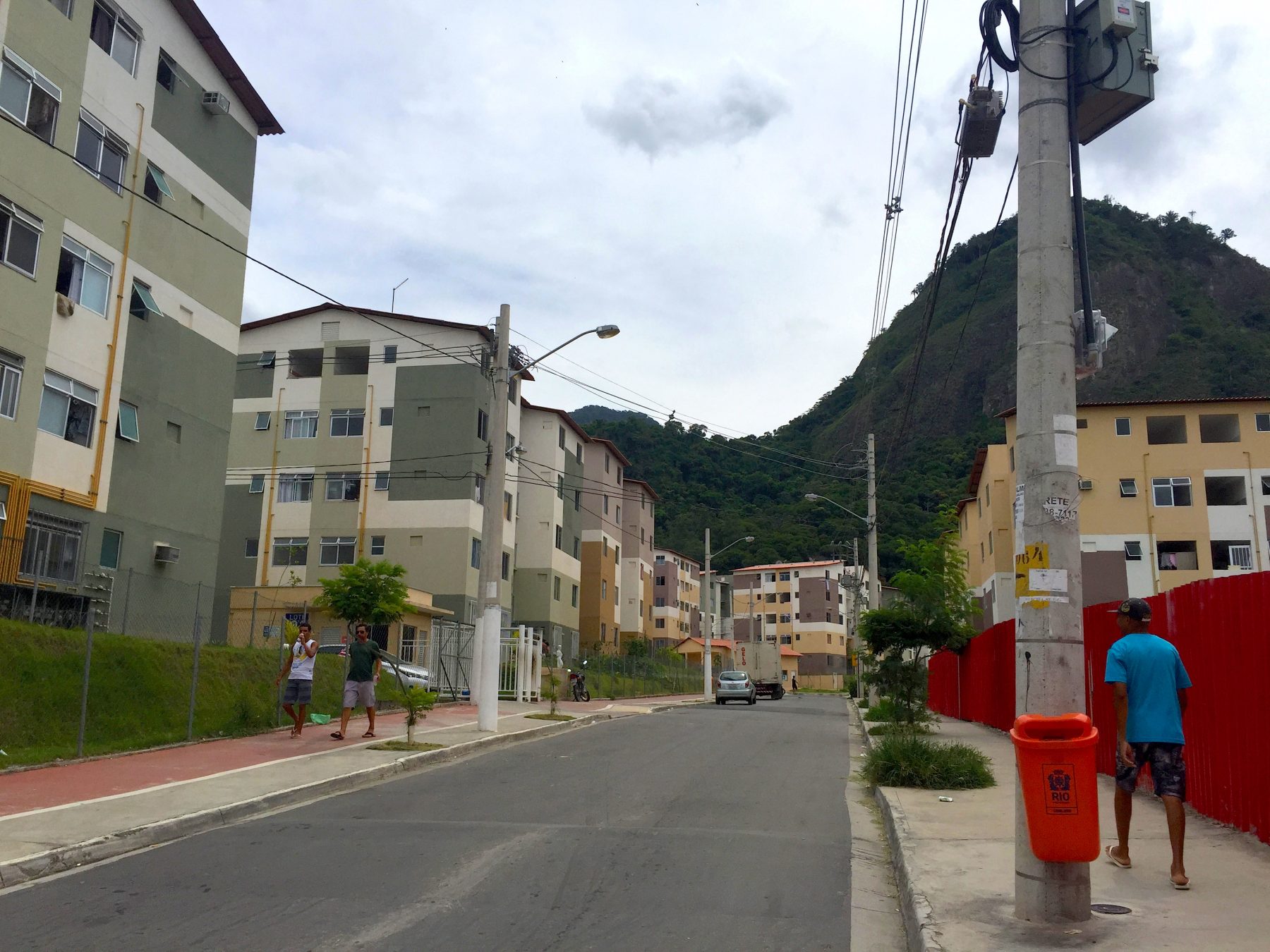 Paes claims that families left on their own volition. This contradicts residents’ reports of consistent pressure to leave with the City slowly forcing families out using fear, intimidation and fueling divisions.

Removal to Parque Carioca was meant to provide homes through an “exchange of keys,” meaning a simple swap of one home for another with the same rights and without extra payments. Instead, the Caixa Federal Bank will be paying 120 monthly installments over ten years, meaning residents cannot actually sell their homes until payments have ceased. Further, a lack of oversight by the government has meant that some of the problems associated with state neglect that did not exist in Vila Autódromo due to the community’s strong community fabric, have appeared in Parque Carioca, like drug use within the condos.

In a Globo article from 2014, one resident explained: “We already have residents using drugs in the corridors. The space is beautiful, but it is not well managed.” Another resident remarked “I thought we would be able to do what we want with the apartments. Now we are imprisoned for ten years. I am afraid this will turn into another City of God.” It is important to note that this Globo article is now almost a year and a half old; due to poor construction, the housing complex is no longer as “beautiful,” signs of degradation are everywhere. 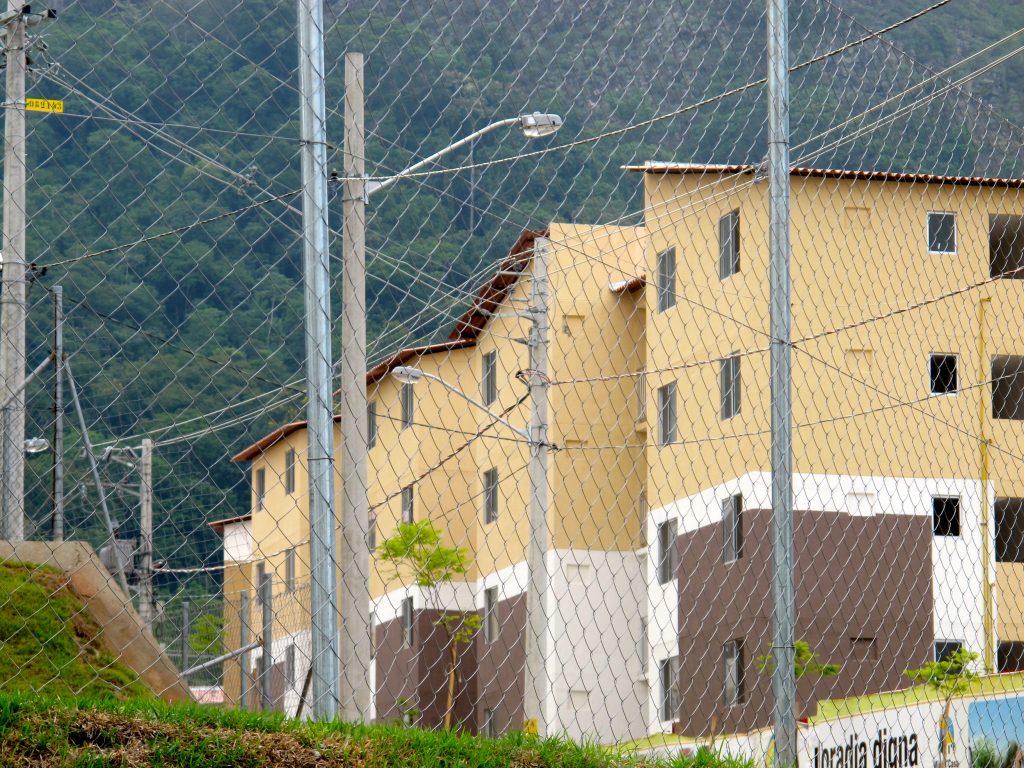 Chainlink fences separate the lots. To some they resemble prisons more than homes.

It is rare to have access to these communities of public housing. Often residents are sensitive to opening up about their experiences because they do not wish to relive the experience of eviction from their communities by talking about it once it is over and nothing can be done. Further, many have told RioOnWatch they are unwilling to speak out with concerns that the public housing would be taken away from them in vengeance, or because these gated communities are frequently controlled by militias.

Here RioOnWatch documents some of the concerns and experiences expressed by Parque Carioca residents on a recent visit. Because of peoples’ fear of speaking up publicly with their own concerns, we will not be attributing any quotes to any person directly in an effort to protect identities. 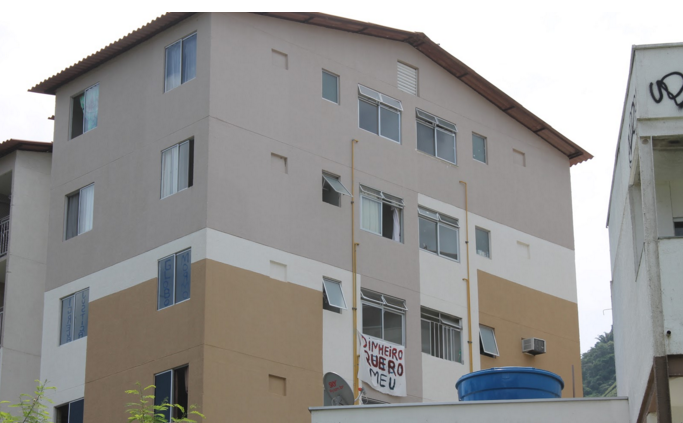 Sign hanging off a Parque Carioca building reads “I want my money.”

Parque Carioca is divided into four separate and unconnected “lots.” Each lot is a section of the community with large chain link fences with a few condominium buildings within them. To enter a lot, residents use two gates: one for cars and one for pedestrians. From the outside, the condominiums look simple in construction, with five floors, decently sized windows and a tiny balcony for each apartment.

Almost immediately after entering the community, RioOnWatch was greeted by a resident whose family had left Vila Autódromo after negotiating a price for their home. The resident said that although they looked for other housing options, they were unable to find adequate housing with the compensation they received for their home in Vila Autódromo. They decided to acquire an apartment from a family member within Parque Carioca because it allowed their child to remain in the same school. They viewed the paved roads and lack of mud as a positive aspect of Parque Carioca.

The resident talked about the lack of maintenance within the complex. The centerpiece of Parque Carioca is a large pool with a slide that is used frequently in marketing materials for Parque Carioca along with initial O Globo reports glamorizing the condominium. Now, it is surrounded by caution tape and the water a bright green hue. Residents were told that if they wanted to use the pool, they would have to maintain it themselves. 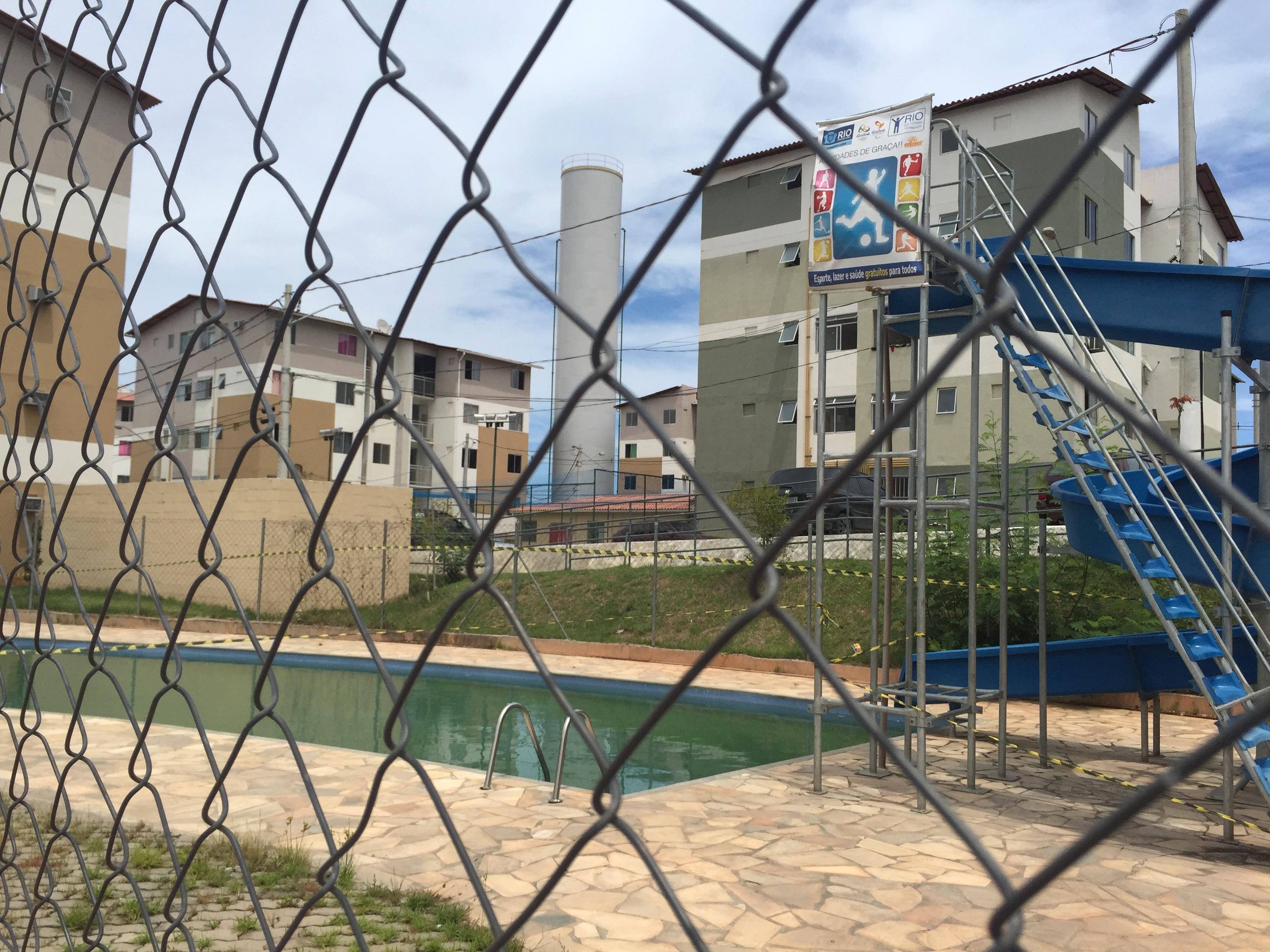 The oft-touted swimming pool has remained full of algae and unusable for many months now. Residents were told by the City that they now must maintain it themselves.

Residents raised issues about the safety and well-being of people in Parque Carioca. There are some who are deeply unsatisfied by the quality of the buildings built in 2013. The City government describes Parque Carioca as “an enterprise of middle class standard.” However residents told stories of water damage and leaky pipes.

Residents also raised complaints about high temperatures in the buildings since there are few to no trees in the complex and poor air circulation. Additionally, although marketing materials for Parque Carioca cite a lack of insects or mosquitos, the patios of some buildings open near drainage pipes that make standing water and bugs a real threat. The Zika virus was already a concern for residents of Vila Autódromo given the pools of standing water created by the destruction of homes and the construction of the Olympic Park, and it seems they have not been able to fully avoid this problem after moving.

Some residents expressed regret for their decision to move to Parque Carioca and said they felt pressured to do so. Mayor Eduardo Paes has continually spoken about how he would not force anyone out and anyone who wanted to stay in the community would, but residents said they were told by municipal workers they would have no option and would ultimately be forced out, so they opted for an early move to Parque Carioca to reduce the risk of further trouble.

This concern is echoed in other stories such as the TV report below, where a woman talks about the mayor’s false promises. Residents were originally promised they would not be required to stay and would own their homes outright, being able to sell their Minha Casa Minha Vida homes if they wished, just as they were able to do with their prior homes in Vila Autódromo. In reality, residents are required to keep the apartments for ten years before they are able to sell them legally. “A prisoner in her own home,” as Vânia was described in the news report:

Overall, residents were very welcoming and open to talking with us anonymously about the pitfalls of the complex, which provided a stark contrast to the way in which the city government portrays the conditions in Parque Carioca.

Upon leaving, however, a woman emerged and explained that she was working for the complex manager. She began yelling and said visitors were not allowed on the premises without a proper guide or to take any pictures without permission. She insisted visitors needed an escort to exit the complex, so they would not wander too much, and that visitors who broke the complex rules have to leave without question. We were later told by neighbors of the complex that such positions are generally filled by someone with connections to the city government, in order to limit information about the frustrations of residents getting out.

Aside from the individual stories of residents, the situation at Parque Carioca represents a much bigger problem, which is the continual disparity between written policy programs and implementation. The residents of Vila Autódromo were forced out of their community with the promise of better living standards in residences provided by Eduardo Paes’ administration. The numerous promotional videos and flashy visits the City undertook to attract residents of Vila Autódromo do not reflect the current reality of Parque Carioca—a shoddily executed and ill-maintained housing complex that echoes the failures of other policy initiatives like Morar Carioca, UPP Social, and even the Pacifying Police Unit (UPP) program. From an urban planning and policy perspective, there are a number of glaring errors in the execution of the housing complex aside from the ones described by residents above. 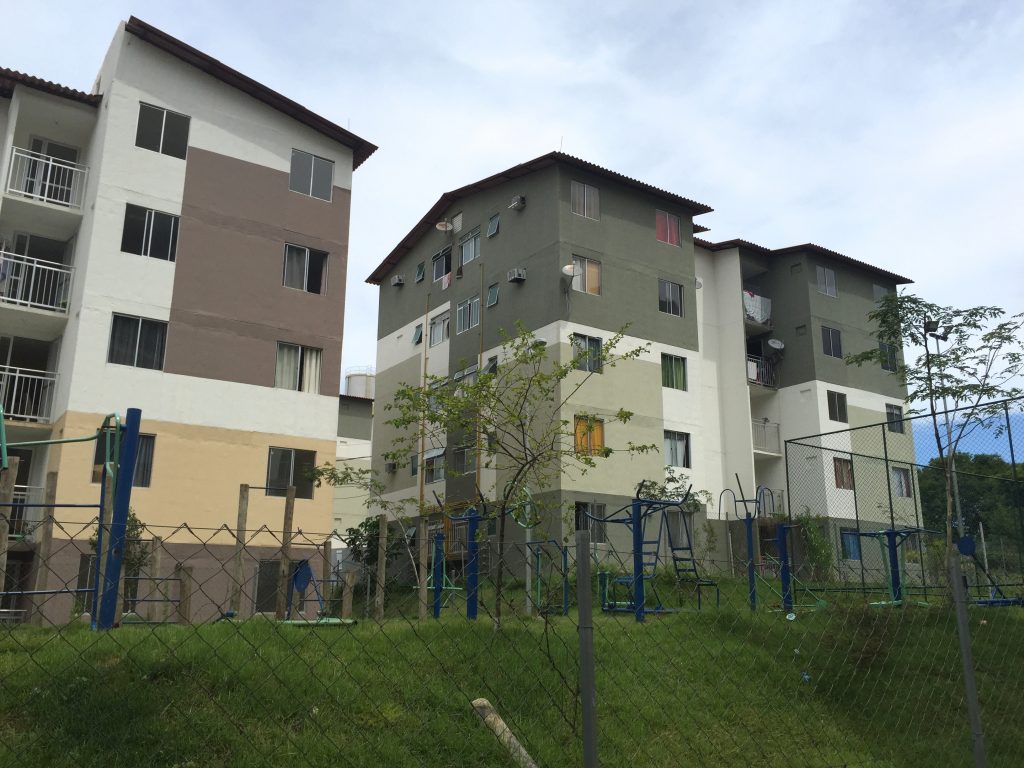 Parque Carioca lacks the vibrancy and street life that is characteristic of informal communities.

First, there is poor connectivity between the condominium buildings. While there was ample parking for residents, this design hinders circulation throughout the complex and sharply contrasts with the dense, connected and vibrant community that once existed in Vila Autódromo. Instead of repairing and upgrading a community that represented so many positive urbanistic qualities, the city government opted for car-oriented, isolated lots that hinder community-building and stifle interaction among neighbors.

Secondly, the design of the complex has many flaws and defects. The playground areas for children are less than two years old yet all of them were in disrepair, full of broken equipment. The metal equipment is said to be too hot to play on. This trend is not just limited to playgrounds. Community spaces are not connected; the lack of shade is oppressive; many of the benches are broken, and it was clear that residents lacked the freedom to interpret the spaces in a way that made them have a useful purpose. 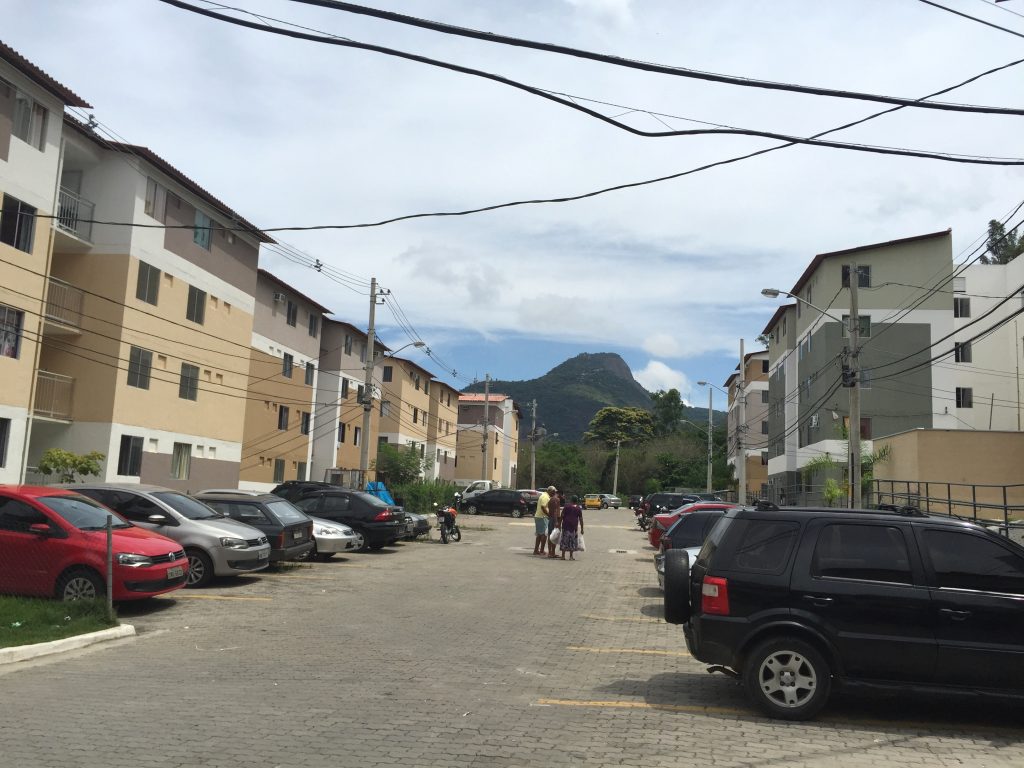 Space designed for cars, not community-building.

Additionally, the classic orange garbage bins that are used throughout Rio were missing in the lot we visited, which resulted in numerous pockets of trash strewn around the complex. Many residents expressed concern about the poor quality of city services they have within Parque Carioca.

It was also clear there is a power structure in the community that does not represent its residents and which serves to suppress their voices. At a time when the future upgrading of Vila Autódromo hangs in the balance, it is not only the 20 families that will continue to live in Vila Autódromo that need attention, but also the hundreds of other families suffering from unfulfilled promises.

View images from our day in Parque Carioca (click here for captions):

This article was written by RioOnWatch Editorial, and published on May 31, 2016.
in #EvictionsWatch, #HousingWatch, #Rio2016, *Highlight, Photo-Essays