“Favelados around the world is culture, too,” grins comedian Marcelo Magano, standing in a sunlit street in Bogotá, Colombia. Behind him is the Jorge Eliécer Gaitán Theater, known for its wide-ranging displays of culture including full seasons of opera and traditional zarzuela performances plus international theater, music and dance festivals. Built in 1890, the theater is only a few years older than Rio’s oldest favelas.

In February 2016 Magano, a resident of City of God in the West Zone of Rio de Janeiro, launched the YouTube series ‘Favelados Around the World.’ He describes the project as “nothing more than a modern favela resident saving for a year to travel.” The series consists of 5-minute episodes of Magano and blog posts from his friends from other favelas exploring cities abroad, providing comedy-infused travel advice “by favelados for favelados.”

“Who says the poor don’t travel?” writes Magano in the series’ inaugural blog post. “I don’t know if it’s because the middle class is rising or because the rich are in crisis, but the truth is that the poor also travel and spend.”

Magano’s pursuit of travel extends the territory of contemporary debates about participation in popular culture, politics and the right to public space. Often framed as a case of economic feasibility, debates around who should participate in travel play off stereotypes that favela residents are too poor to travel, it would be financially irresponsible for them to do so, or that they cannot partake of “high culture.” International travel, and air travel in particular, have been framed in the recent past as something belonging exclusively to Brazil’s elite social tiers. In 2012, Folha de São Paulo published an opinion piece from writer Danuza Leão lamenting that travel loses its allure “if your doorman can go as well.”

More recently, in 2014 a professor at Rio’s Pontifical Catholic University (PUC), posted a photo of a fellow passenger at Rio’s Santos Dumont airport to Facebook with the caption, “Airport or bus station?” The photo triggered hundreds of shares, largely due to comments from other university professors that the passenger depicted “looked more like a stowaway,” that air travel is now “seriously lacking in glamor” and that “this is the type of passenger who–clearly–doesn’t respect (or doesn’t fit) in their own seat.”

In the Favelados Around the World project, Magano uses his unique brand of comedy to challenge notions that travel is reserved for certain economic or social classes. His narrations of his first trips to Bogotá, Cartagena and San Andrés in Colombia poke fun at middle and upper classes as well as working classes and fellow favela residents.

“Laughter is revolutionary,” he explains. “Laughter is my most powerful and clearest weapon of expression. I like to play with the stereotypes given to the favelas, the idea that you’re ‘poor even when you have money because you spend it on frivolities.’

“There’s always this idea of the ostentatious dude who spends money on drinking, on women and expensive clothes, and that this is the only type of favelado that exists. Yes, I am bragging about traveling in the same way that many favela residents brag to show off what they have. But I’m doing this to show that we were always more than that stereotype.”

For Magano, travel isn’t about showing off or about leisure; instead, he believes that each journey is about learning, experience and cultural exchanges that enable personal transformation. He says he is surprised by the series’ impact, with more and more of his peers expressing interest in following in his footsteps. “Favelados Around the World is a culture,” he reaffirms, “it’s about more than just leisure.”

“Traveling should be a basic right for every human being,” he said. “Favelados Pelo Mundo is a manifesto: we want to see poor black youths traveling around, exchanging, sharing, learning and teaching with others.” 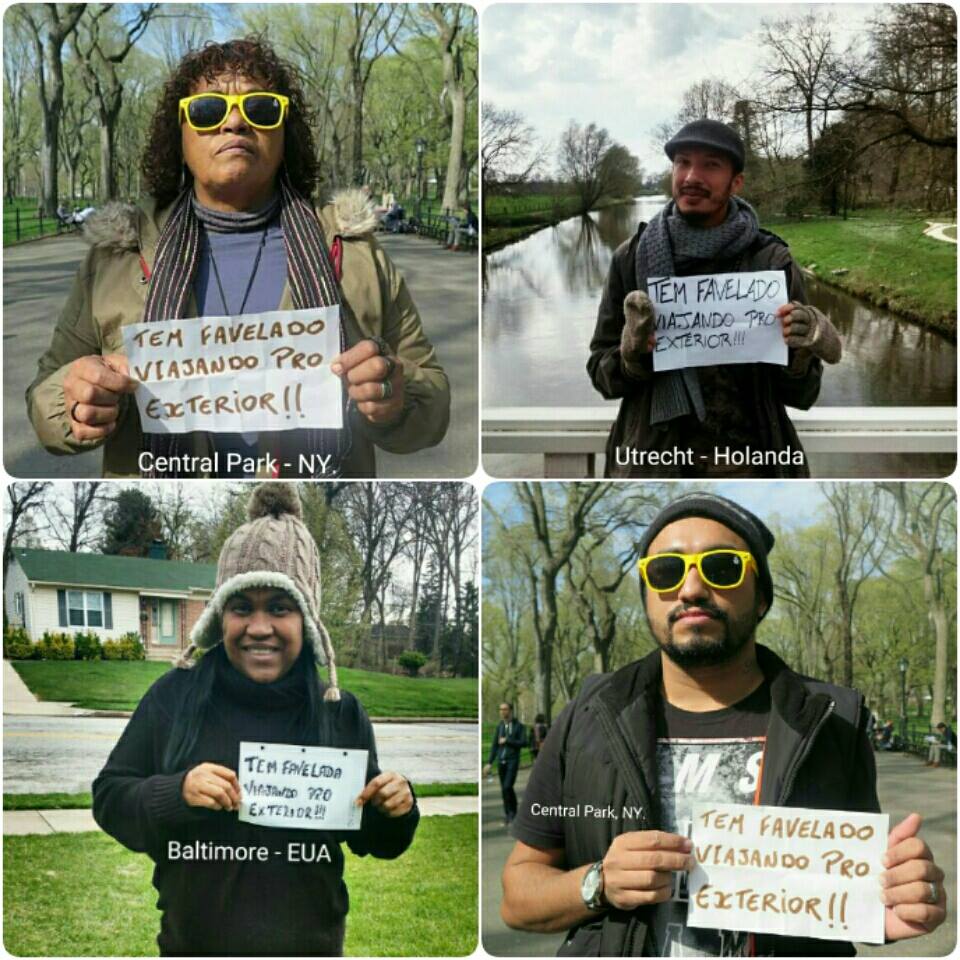 “There are favela residents traveling abroad!”

Favelados Around the World has extended beyond South America, with Magano’s peers traveling in the USA and Europe. Activist and writer Thainã de Medeiros wrote about his trip to Holland for Favelados Around the World, which he described as the “first vacation of my life” and an “achievement for someone of my background to even set foot in Europe.”

Isabela, a French language teacher from Brasília, wrote a guest post for the series blog after her 20-day trip through Lisbon, Brussels, Amsterdam, Paris and Dijon. “Favelados Around the World is the most beautiful thing,” she wrote, “because it shows people, people like us, that you don’t have to be born with a silver spoon to see the world, nor are we limited by where we are born.”

Community journalist and activist Raull Santiago voiced his support for Favelados Around the World after his recent trip to New York City with Débora Maria da Silva, founder of the Mães de Maio Movement of mothers who’ve lost children to police violence. Both were speaking at an Amnesty International event on human rights and police violence in the favelas. Santiago and Medeiros’ fellow Coletivo Papo Reto activist Renata Trajano also recently visited Baltimore, after which Santiago shared the above photo on Facebook, endorsing Magano’s series. Santiago’s ecstatic caption reads, “Just so you know: the favela is traveling abroad!” and was met with equal enthusiasm in the comments.

Magano is expanding the program, with four competition winners who will travel and blog to be announced at the end of 2016. And Magano has no plans to stop traveling himself, with plans for his own next journeys are already in place. He plans to travel through Central America, in Mexico, Guatemala, Honduras and Costa Rica. He finishes our exchange with another chuckle, “Ostentatious, no?”

This article was written by Ciara Long, and published on June 16, 2016.
in #CommunityMedia, #ParticipationWatch, by International Observers, Favela Culture, Interviews & Profiles