The TransCarioca Bus Rapid Transit (BRT) line–an Olympic Project inaugurated two years ago–has left a trail of destruction and abandonment in the traditional neighborhood of Ramos in the Leopoldina Zone in the North Zone of Rio  de Janeiro. The construction of this new bus transit corridor, considered essential for receiving the tourists arriving at the international airport for the 2014 World Cup and 2016 Olympics, ended up ignoring the Simplified Environmental Report to ensure the last minute completion of the project. Now, residents are left wondering, “Olympics for who?” 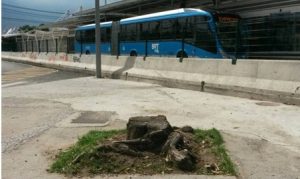 Trees cut down for the BRT

The Ramos region is one of the most affected by the urban heat island that overwhelms Rio’s North Zone and has suffered a great loss of vegetation coverage in its streets.

The few public squares that still had trees prior to the “Olympic Legacy” projects had even been diagnosed as insufficient by the municipal government itself, in its Simplified Environmental Report for the BRT TransCarioca, Lot 2:

“The squares, according to data from the IPP (Pereira Passos Institute for urban planning), are the most common type of public space in the studied neighborhoods, where the population can find children’s playgrounds and athletic courts, as well as a place for social gatherings. The absence of parks in all of the studied neighborhoods, and the absence of gardens in Ramos, Olaria and Penha–densely populated neighborhoods–reveals to us that squares are the spaces provided by the state for social interaction. However, these are shown to be insufficient in quantity considering the local need.” 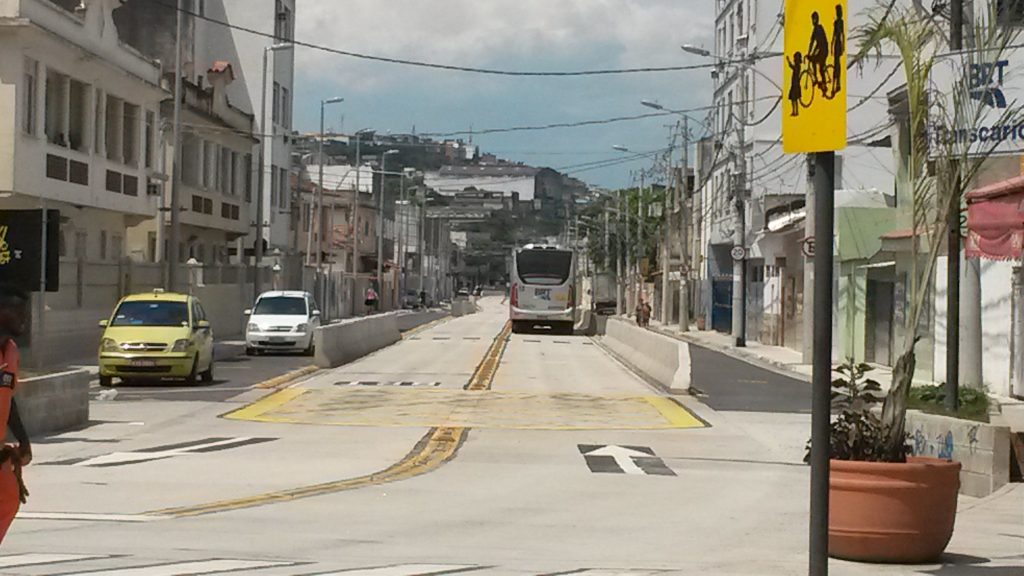 Residential streets, previously lined with trees, turned into hot ovens radiating heat from the non-sidewalked street. In the upper-right corner, a sign indicates a speed limit of 20 km/h, due to the possibility of children on the BRT thoroughfare.

But the Rio city government paid no attention to this part of the report and instead, with the BRT route, eliminated the few sporting and recreation areas in the region. The City destroyed four neighborhoods squares, leaving an entire region of the Olympic City with no options for green, sporting and recreational spaces, contrary to everything that a modern Olympics should provide for a host city.

In addition to the insufficient number of green spaces and sporting and recreational areas in the region, another item in the Simplified Environmental Report for the BRT TransCarioca did not gain the necessary attention and was not contemplated by the conclusion of the works:

“Redevelopment of the area directly impacted by the project, with improvements to roads, new signage and a more modern lighting system, in addition to the creation of new green spaces and recreational areas.”

A road parallel to the BRT hasn’t been paved.

In reality, the streets around the BRT never received improvements, and in some cases, were simply abandoned. The mobility of the region was compromised by the project and reconstruction simply ignored.

Footbridge left half finished after the inauguration of the BRT TransCarioca.

With two weeks left until the Olympics, this situation continues and the residents of Ramos see themselves very far from the promised Rio Olympic Legacy of the so-called “Olympic City.” 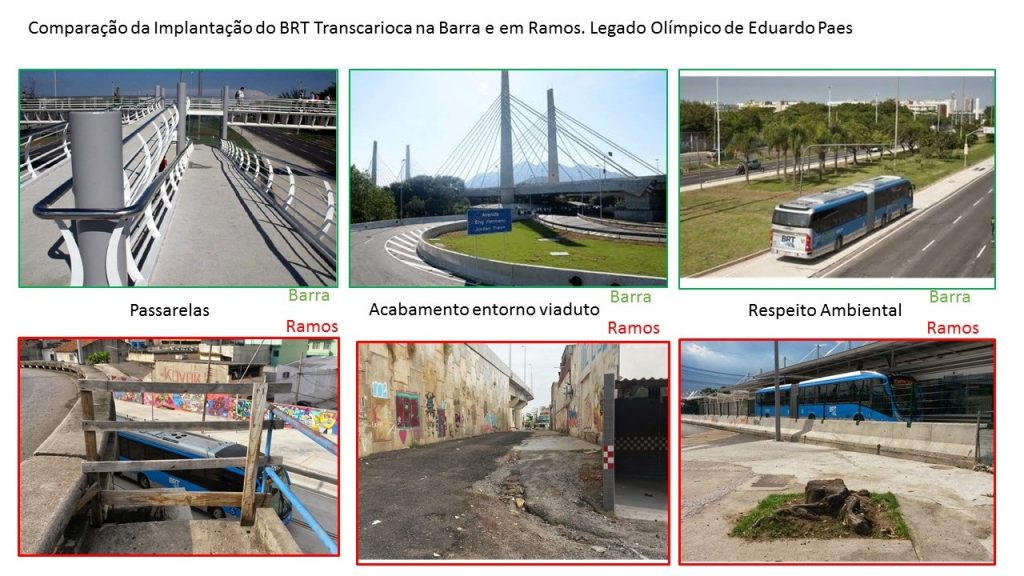 Comparison of the implementation of the BRT TransCarioca in (wealthy) Barra, above, and in (working class) Ramos, below. Comparing the Olympic Legacy in terms of: 1. Pedestrian Bridges 2. Improvements in Surrounding Area  3. Environmental Respect.

“The whole Leopoldina Zone was treated like nothing but a thoroughfare between the international airport and Barra da Tijuca in the Olympic projects. It was always overlooked for state and municipal investments and when finally the City invests in the region, it doesn’t improve the quality of life of neighborhood residents. To the contrary, it makes it worse.

We already didn’t have many public recreational areas and the few we had were destroyed. Nothing was replaced or compensated. A neighborhood like Ramos, with a huge residential area like ours, should include a large recreational area, but now we don’t even have small squares, and the children risk death by playing in the lanes for the BRT. The planned cultural projects for the restoration of the old cinemas, closed since the 1980s, aren’t advancing, and they aren’t being repurposed as educational or cultural centers. Accessibility is another concern that goes far beyond Olaria and Ramos and the other neighborhoods of the Leopoldina Zone. Like the neighborhoods cut through by the railway, we need ramps and pedestrian bridges. But the opposite happened; we lost another pedestrian bridge.

It is incoherent that the Mayor alleges that the (overpass) Perimetral Highway made the city ugly, but he built another overpass in a residential neighborhood for the BRT to pass. We have the clear impression that we are just that: a place for the BRT to pass through, as if we didn’t live here with the same rights to access recreation, sports and culture as the rest of the city! Even leaving our region to visit other parts of the city was made more difficult with the cuts to the bus lines: we gained a so-called project for mobility and we lost it at the same time! We want the right to the city and citizenship.”

The Mayor has no clothes

As if based on Hans Christian Andersen’s classic story, Mayor Eduardo Paes and the City government make announcements of things that no one is able to see:

“I can say that this project is a sort of declaration of love to Rio de Janeiro. Its suburbs went through more than 49 years of high-level neglect. When we deliver the TransCarioca, we aren’t just talking about mobility, but also the restoration of Rio’s suburban neighborhoods, which are the soul of the city. The BRT will allow Rio to rediscover its true identity.”

Paes emphasized that the implementation would be gradual and would bring benefits to the local population. “A degraded, inaccessible area of the city was transformed into a place where mobility is totally facilitated. It wasn’t just installing BRT stations. It was installing sewers, paving sidewalks, creating squares and recreational areas,” he said.

“With a span of 39km and 47 stations, the TransCarioca passes through 27 neighborhoods that gained, as a consequence of the project, a true transformation. New sidewalks and paving, restructured drainage systems, improvements in lighting, pedestrian bridges and new stoplights were some of the changes in neigborhoods like Vicente de Carvalho, Vaz Lobo, Madureira, Campinho, Jacarepaguá, Penha and Ramos” – Olympic City website

But the declarations on the street, everyone can see:

“Some have comfort, others have the BRT,” says a message on Rua Emilio Zaluar, where people have to walk in the street or in the BRT lanes for lack of sidewalks.

Hugo Costa is 41 years old. He is a graduate in Geography of the Fluminense Federal University (UFF), an aspiring blogger and a resident of the Ramos neighborhood.