Over the coming week, a range of anti-Olympics protest events will take place across Rio de Janeiro, culminating in a large demonstration during the opening ceremony on Friday August 5. Under the banner “The Exclusion Games,” various social movements and collectives have come together to organize a series of events highlighting the problems with the city’s Olympics developments.

There’s plenty for Rio residents to protest about. Mayor Eduardo Paes’ vanity project has changed the city, making it more unequal, more segregated, and more divided. In the name of the Games, over 77,000 favela residents have been evicted, and many more residents of favelas the formal city alike have been forced to leave through gentrification. Over 2,500 citizens have been killed by police in the city since Rio won the right to host the Games in 2009. All the grand plans for environmental legacies, including cleaning the city’s waterways, have been scrapped. Not only have the Games failed to help the environment, they’ve actively damaged it, with the golf course built in the Marapendi nature reserve just one example.

Despite the claims that the Olympics are all about sport, several community sporting facilities have been shut around the city and replaced with elite facilities from which local people are excluded. The indigenous population of Aldeia Maracanã, who were evicted from their museum near the Maracanã stadium prior to the World Cup have still not heard any news about the new museum site they were promised by the Brazilian Olympic Committee. At the national level, the Olympics will be opened by a man many in Brazil see as leading a coup against the democratically elected Dilma Rousseff, who will be absent from the Olympics. 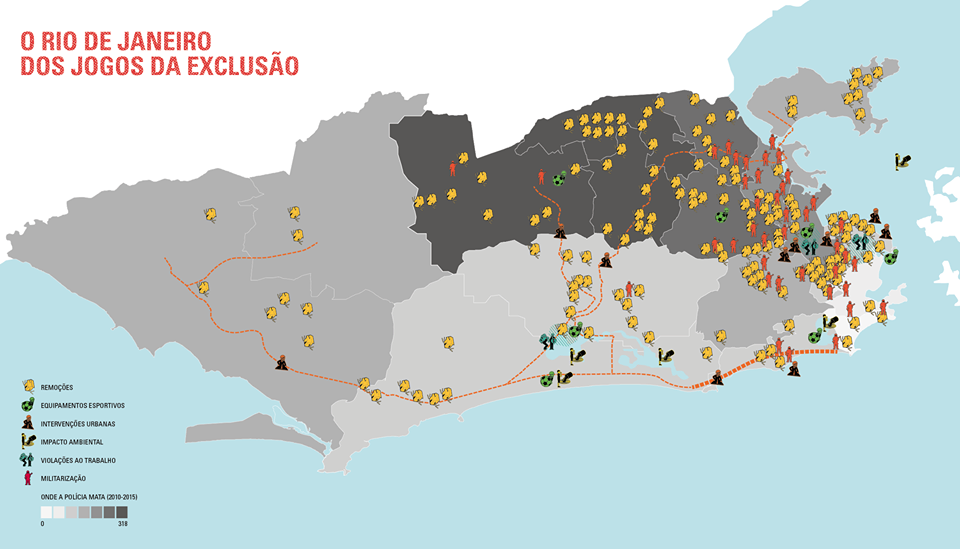 The sheer cost of the Olympics, conservatively estimated at around R$40 billion or US$12 billion (although this is likely to rise even further after the Games), has brought public services to a standstill. The State of Rio de Janeiro recently declared a state of calamity to release extra federal funding as it couldn’t pay public servants, including the police who will protect the Games. Because of Olympic spending, cuts to education and health care have led to closures of hospitals and an education strike, supported by students occupying their schools.

A significant chunk of this Olympic spending is under investigation for corruption in the contracts as part of the nationwide anti-corruption Operation Car Wash. While the city says that most of the money for the Olympics comes from private sources, many of the contributions to the Olympic budget are from real estate developers who will be given publicly owned land once the Olympics have finished–essentially the money has been raised by selling off public assets through the backdoor at bargain basement prices.

And while there are all these issues to protest about, new laws introduced for the Olympics threaten to define political protest as terrorism, legitimizing state violence. Security staff for Rio’s metro attacked protesters and journalists when they marched against the Olympics a few weeks ago. All this adds up to denying many Cariocas the right to their city–Rio has been imagined and shaped to be a city where people invest their money, at the expense of those who live here.

Cariocas protesting against the Olympics join a rich history of protest against the local impacts of the Games. Since 1932 locals have protested Olympic spending and in recent times anti-Olympic protest has gained pace. Whether it’s activists concerned about gentrification and racial segregation in Atlanta, indigenous and environmental activists from Sydney, human rights defenders in Beijing, activists fighting for civil liberties, against gentrification and defending the environment in Vancouver and against the militarization of the city in London, Circassian activists in Sochi, or even activists fighting for the rights of the homeless in Tokyo (the next city to host the summer Olympics), activists in Rio will be watched and supported by people all over the world who have seen similar impacts in their cities. The Olympics leave a trail of exclusion, broken promises, and angry locals wherever they touch down–and further pressure here in Rio will help force the Lords of the Rings into change.

The week of protest will begin on Monday August 1 with a vigil of dignity in Cinelândia in response to the actions which have undermined equality between all people and nature. From August 2 to 4, various events will be held at the Rio Federal University’s Institute for Philosophy and Social Sciences (IFCS/UFRJ) in downtown Rio. Each day will have three themes, and activities in the morning, afternoon and evening including workshops, debates, film screenings and exhibitions, followed by an action in the street to end each day. Throughout the week, the Evictions Museum, a pop-up museum by residents and supporters of Vila Autódromo to preserve memory, will be installed in Largo de São Francisco outside the IFCS building.

These events will be followed by a march through downtown Rio by athletes and users of sports facilities which were closed for the Olympics.

This will be followed by a debate in Largo de São Francisco about the city and democracy, with speakers from Rio as well as other states and countries.

This will be followed by a large panel on the Exclusion Games, with 16 of those hit by violations in the name of mega-events.

On the final day, Friday August 5, a large mobilization will take place in Praça Saens Peña in Tijuca, close to the Maracanã stadium, where the official Olympic opening ceremony will take place simultaneously. This has echoes of the protest against the World Cup, which was organized in the same location during the final of that event. As the Facebook event page says, “in a city where the abyss of inequality is growing increasingly wide through tractors, bullets and bombs, it is crucial to advance the fight for the right to the city, to democracy and to social justice. We denounce this project of a segregated city, Rio 2016 Olympics.”

This article was written by Adam Talbot, and published on July 31, 2016.
in #EvictionsWatch, #GentrificationWatch, #ParticipationWatch, #Rio2016, by International Observers, Civil Society, Violations