Amnesty International Brazil organized a surprise action early on Wednesday morning, July 27 to protest the increase in police killings in the lead up to the 2016 Olympics Games.

At precisely 10am, a group of demonstrators from Amnesty’s Brazil chapter laid out 40 black body bags in front of the Rio 2016 Local Organizing Committee building in Estácio, Central Rio, symbolizing the 40 people killed by police in the month of May 2016. Atila Roque, Amnesty International Brazil Director, stated that this is over a 130% increase in homicides by police from the same period a year ago. Likewise, he says there has been yet again an increase in the violation of citizens’ rights in the name of “supposed protection” leading up to a mega-event.

“A portion of the [police killings] happened simply because the police arrived immediately shooting in favelas, and clearly if you start firing in an area that is densely populated, people will be hit and will die. Another portion were documented cases of police hiding in determined houses to execute individuals. Other cases documented by Amnesty International were cases of people who were suspected of having committed a crime or people who were caught committing a crime but who were not armed, had already surrendered, some of whom were injured, or people who did not represent any type of risk to anyone, and the police, instead of stopping these people and taking them to jail, intentionally shot and executed these individuals.” 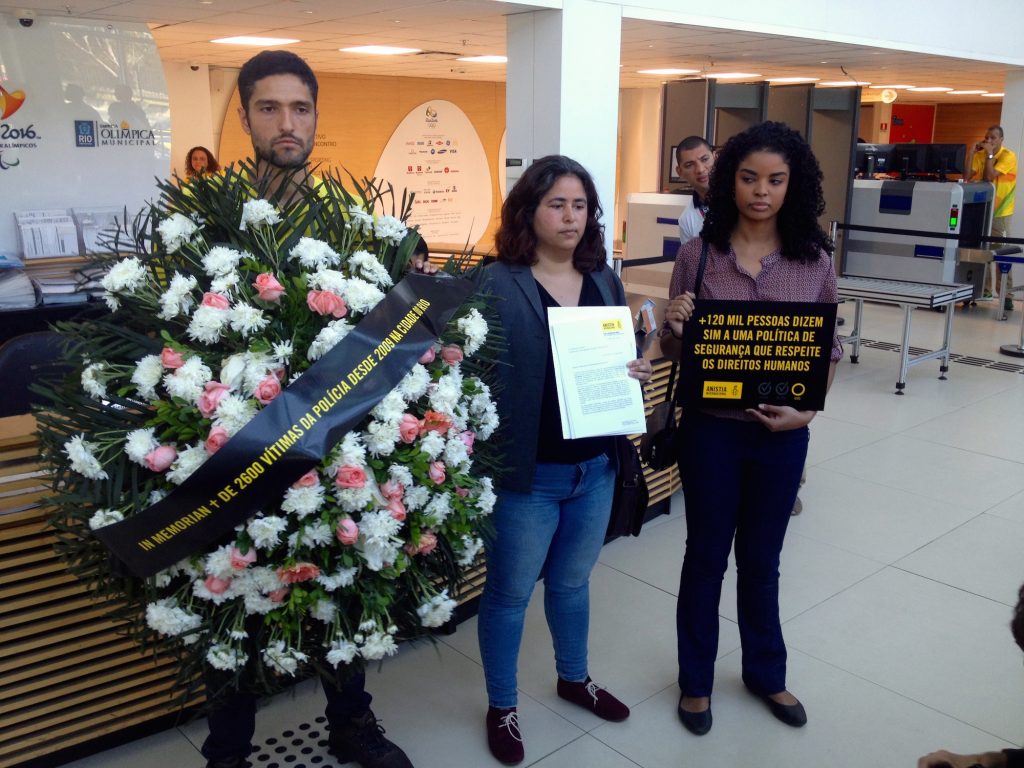 After positioning themselves outside the Local Olympics Organizing Committee headquarters, the group marched into the building to deliver a petition signed by over 120,000 people demanding better security policies respecting human rights for the Olympics. This, along with a flower arrangement dedicated to the 2,600 victims of police killings in Rio de Janeiro since 2009, were delivered to the front desk of the headquarters. A Rio 2016 staff member accepted the items, however another member quickly removed them and had them taken out of sight.

There were no conflicts between demonstrators and police during the event. Although security agents were present, they allowed the peaceful protesters to continue with their action without any interference.

This article was written by Alex Besser, and published on July 29, 2016.
in #Rio2016, by International Observers, Event Reports, Violations