Shortly after 8pm on Saturday, August 20, just as the thousands of fans packed into the Olympic Boulevard in Rio’s Port Region began celebrating Brazil’s victory in the gold medal soccer match, a group of about two dozen local activists launched a campaign protesting police violence against favela residents during the Olympics.

The multi-generational group, comprising activists from across the city, climbed the base of one of the pillars lining Praça Mauá and unfurled a bright orange banner reading, “How many bodies of black favela residents does it take to make the Olympics?” The organizers took turns speaking into a megaphone to explain the purpose of the action and call attention to the violence affecting their communities.

“This is a symbolic act in response to the repression of the population during the Olympics,” said one of the activists, a 24-year-old from the Acari favela in the North Zone who asked to remain anonymous. “The idea is not to respond to violence with more violence. We hope that more people will join us and mobilize.”

The activists stayed on the structure for about ten minutes, long enough for bystanders to take photos and record video, and for the banner to appear in the background of the TV broadcast shown on the big screen in the plaza.

Organizers strategically planned the action to coincide with the end of the match, when it would have maximum impact and visibility in front of the thousands of people gathered at the Boulevard. As the final minutes of regulation time in the match between Germany and Brazil ticked away, they made their way through the shoulder-to-shoulder crowd then remained at their post around the pillar for nearly 40 minutes more as the match went into overtime, then to penalty kicks.

“We chose this place and this time because it’s the time of the Olympics, and the Olympic Boulevard has the greatest concentration of people,” said a 27-year-old participant from Vila Isabel, who described himself as a “supporter” of the campaign. “This place is also significant, it’s a symbolic location because of the development projects and the evictions that have taken place in the Port zone.”

The crowd around the banner appeared mostly supportive, taking a break from cheering and hugging one another to clear a space around the banner, snap photos, and record video. While one small group of men shouted at the protesters in disagreement, others nearby applauded the action.

The action coincided with a similar protest at the Maracanã stadium, where the gold medal match was taking place. In the stadium, Carlos da Silva Souza, father of one of the five youth killed by police in Costa Barros in November 2015, displayed a banner showing the faces of the five young men and reading, “Rio, 450 years as Olympic champion in murders of poor black youth.”

Prior to the action in Praça Mauá, some participants were anxious about a potential police response.

“Demonstrations are prohibited within Olympic events and spaces,” said the activist from Acari. “We’re breaking that rule, so we hope everything is calm. We don’t want any confrontations with anyone.”

A group of about 16 officers monitored the activists as they gathered and planned the action, but no police were nearby when the protest took place.

The action marked the kickoff of a new campaign by favela activists, organized under the slogan #FomeDeViver (#HungerToLive). In the week leading up to to the event, organizers posted videos on Facebook protesting ongoing police violence against favela residents, explaining why they had “hunger to live,” and encouraging supporters to create and share their own videos.

The #FomeDeViver campaign was publicized and supported by Mutirão Rio2016, an independent collective of Latin American media aimed at reporting on and bringing greater visibility to the social impact of the Rio Olympics.

Activists at the August 20 action stated that they were participating as individual citizens or representatives of their communities, rather than on behalf of the civil society organizations with which some are affiliated. The event received support on social media from several local organizations, including the Manguinhos Social Forum and the Rio de Janeiro Youth Forum.

On the event’s Facebook page, organizers stated three main goals for the campaign: an immediate end to police operations in favelas, discontinuing the use of armored personnel carriers and helicopters, and repair of damages caused by police.

The post drew specific attention to the escalating police violence in the favelas of Acari, Borel, Cantagalo, Complexo do Alemão, Complexo da Maré, City of God, Manguinhos and Serrinha. Residents and community media organizations documented numerous police operations during the two weeks of the Olympics, with reports of shootouts emerging almost daily from some communities. 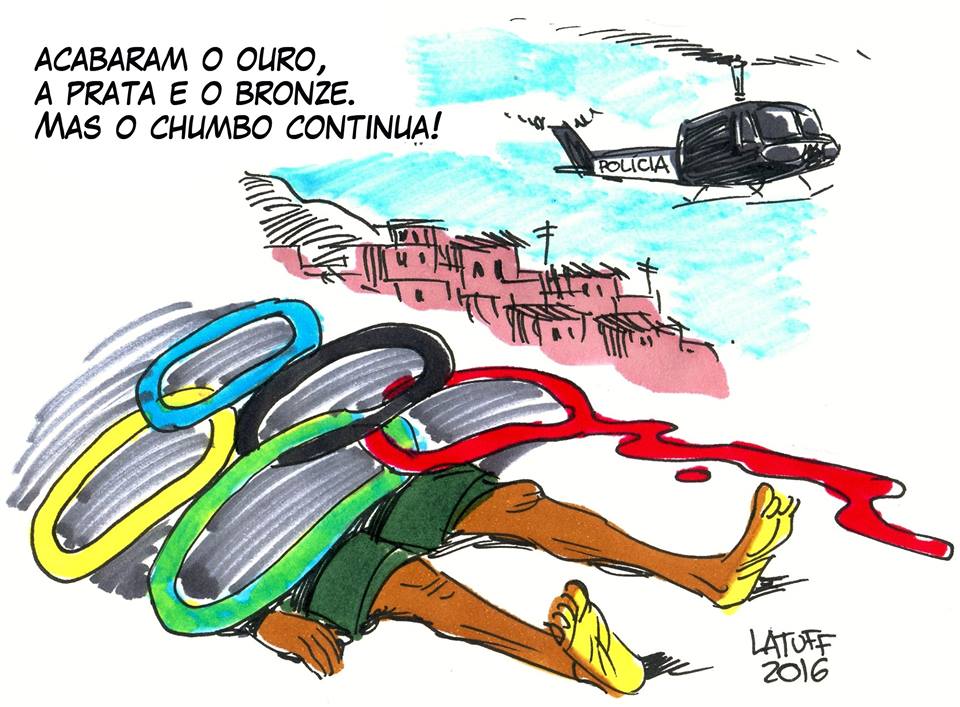 “The gold, silver and bronze have finished, but the lead continues.” Cartoon by Carlos Latuff

“These mega-events aren’t for the people,” added the participant from Vila Isabel. “The idea is to give a voice to the people who are suffering. #FomeDeViver raises this issue, that people are dying.”

After the action concluded, the activists gathered to the side of the dancing crowd to debrief. Before they dispersed, organizers promised more actions would take place in the near future.

This article was written by Natalie Southwick, and published on August 23, 2016.
in #Rio2016, #UPPWatch, by International Observers, Civil Society, Event Reports