In the days following the Rio 2016 Olympics, Brazilian media have been examining reactions to the event from the international press. Globo TV claimed international media was full of praise. An Agência Brasil article titled “North American press highlights the success of the Olympic Games in Brazil” summarized select positive reactions with quotes praising the Closing Ceremony and the Games overall.

The President’s Office, in turn, published its own summary of how the “International Press Praise Brazilian Organization and Point to the Games’ Success.” The report highlights compliments about the event itself as well as select foreign reporters who praised improvements in Rio de Janeiro’s urban transportation and the revitalization of the city’s Port.

Yes, there has been plenty of global praise for the Olympics in this week of post-game analysis, but Brazilians should be aware of the prevalent critique too, little of which makes it onto the pages of national newspapers and even less so TV. Foreigners who doubted Rio’s capacity to technically carry out the event from start to finish have been rightfully hushed, but many foreign journalists never doubted that ability in the first place. More thoughtful and skeptical questions around social legacy and the (at least) 12 billion dollar question of ‘was it worth it?’ have not been silenced in international media.

Complex reactions to a complex event

In an interview on NPR examining “How Did Rio Do?“, correspondent Lulu Garcia-Navarro underscored the importance of looking separately at the 16 days of sports and the seven year preparation process that “was really very complex and very difficult” for Brazilians. Referencing a Brazilian poll published on the final day of the Games, she added: “Sixty-two percent of the population believed the Olympics brought more costs than benefits. And yet, 57 percent feel it improved Brazil’s image abroad. So, you know, Brazilians did fall in love with these games. They were ambivalent at the beginning. But they also know that the bill is coming due.” Reflecting on the same polling data, The New York Times quoted O Estado de S. Paulo columnist José Roberto de Toledo’s conclusion that the polls reflected a “wasteful event that worked out.” 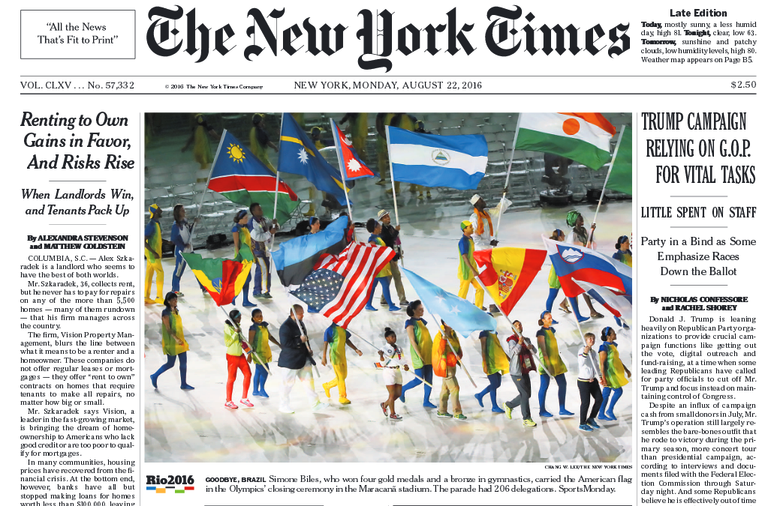 Concern about what’s coming next has been a frequent theme in international media. The aforementioned New York Times article emphasized that “the intoxicating mood of the past two weeks will inevitably give way to an array of challenges: the inadequate sewage-treatment system, the growing poverty and a broken state government unable to pay thousands of civil servants on time.” In The Guardian, Brazilian public security expert Luiz Eduardo Soares called the Games themselves “a success,” but continued on to say: “What worries me–and many residents–is what happens the day after they finish. In a short while the Olympic Games will be memory, but they will last for us, who live in Rio, as a major object of political dispute and a challenge for the future.”

Given those imminent concerns, Guardian sports correspondent Owen Gibson questioned the IOC president Thomas Bach’s rosy interpretation of events, likening some of his claims to George Orwell’s concept of “blackwhite,” the “ability to believe that black is white.” In contrast, Gibson’s article highlights both positives and negatives of the Games, calling them a “ride” that “has been by contradictory turns chaotic, uplifting, amusing, enchanting and enraging.” This idea of the Games as “contradictory” has been another regular theme in foreign media reactions. The Boston Globe, for example, called the Olympics “a spectacle of contrast, an imperfect Games.”

The Games’ stated legacies have also continued to come under scrutiny. Gibson questioned how using some Olympics infrastructure to build four new schools will really address the “deep-rooted public-funding crisis” that is rupturing the State’s ability to maintain public education and health services. Articles from the BBC and CBC touched on how favela residents were excluded by high ticket prices and legacy projects that didn’t serve their needs, respectively. A piece in The Mirror forefronted the overbearing social costs of hosting the Games, as did Luiz Eduardo Soares’ reflection in The Guardian. Even the New York Times article cited by both Agência Brasil and the federal government actually offered evidence to both support and contest the idea that the Games left a positive legacy for the city.

Some articles refused to let the sports excitement distract from a searing critique. “The Rio Games were an Unjustifiable Human Disaster, and so are the Olympics,” read one Vice headline. The article continued on to highlight mass forced evictions, the thousands of people killed as the pacification policy attempts to paint a picture of security, and the transfer of money to wealthy, private interests at the cost of spiraling public debt, “exacerbating socioeconomic divides.”

Anticipating the media to heap compliments onto the host city as the Games wrapped up, a ThinkProgress article titled “Don’t Call The Rio Olympics A ‘Success’” and this writer’s article in POLITICO explicitly cautioned journalists against praising the Olympics uncritically. ThinkProgress sports reporter Lindsay Gibbs wrote: “Individual athletes had successes in Rio, and there’s nothing wrong with savoring them. But don’t let that distract you from the systemic failures at play in the Olympics as a whole.”

And perhaps there has been a small shift in the way mainstream media assesses mega-events, even since the recent 2014 World Cup. BBC correspondent Wyre Davies wrote after the World Cup: “I will hold my hand up, and so should quite a few others, for perhaps underestimating Brazil’s ability to hold what turned out to be an overwhelmingly successful World Cup.” The article was not free of criticism, but the title, “How Brazil silenced its critics,” was considerably more generous than the more neutral version after the Olympics: “Has the Olympics been a success for Brazil?” In the post-Olympics article, Davies was more explicit about what he considers a success: “From a purely sporting perspective, Rio 2016 has been an extraordinarily successful Olympic Games.”

Other examples of praise were less than convincing: Canada’s The National Post articulated how low expectations set up a narrative about success with low standards: “Rio’s Olympics will be remembered as a success because they were not a failure.” Even the Los Angeles Times line highlighted by Agência Brasil—“Rio Games prove to be a challenge, but in the end, things weren’t all that bad”—was hardly a dazzling review. It was also just the article’s caption on the site’s homepage rather than part of the balanced assessment in the article itself.

Ranging from cautious approval to unrestrained and poorly justified enthusiasm, praise for Rio’s Olympics certainly has been prevalent in the past weeks’ analyses. But the reaction from international media has been far more complex than the reports by Agência Brasil and the federal government admit, much like the legacies of the Olympics themselves.

This article was written by Cerianne Robertson, and published on August 27, 2016.
in #Rio2016, *Highlight, by International Observers, Perceptions