From September 29 to October 2, the Cine Manguinhos in the Manguinhos favela in the North Zone of Rio de Janeiro hosted the first ever Images and Complexes Film Festival, featuring 30 films produced by favela residents from communities throughout the city.

The Images and Complexes collective has been active since 2012, hosting film screenings and cinema club events in various favela communities. The collective is comprised of individuals involved in audiovisual production from several different favelas, including Manguinhos, Rocinha and Complexo do Alemão, and has worked in partnership with a number of favela-based groups including TV Tagarela and Raízes em Movimento. This year marks their first ever film festival, made possible with the financial sponsorship of electric utility Light, as well as partnerships with government programs including Favela Criativa and the State Secretariat for Youth, Sport and Recreation.

The aim of the film festival is to provide a space for favela residents to showcase self-made audiovisual production, presenting stories and images that both expand and go beyond the issue of violence that so often dominates mainstream cinematic representations of favelas.

Fabiana Melo Sousa is one of coordinators and curators of the festival, and was born and raised in Rocinha. She explains the motivation behind creating this space:

“When the Olympics came and hosted that opening ceremony, it used the aesthetics of the favela–the architecture, funk, colors, black bodies, and dancing–to the point that I think today things are quite different from when I was a child. The difference is that nowadays you can no longer think of Rio de Janeiro without thinking of favelas. Cinema did this; cinema brought the favela into the imagination of Brazil, and has transformed the outside world’s way of imagining Rio. Nevertheless we believe that it is imperative to decentralize this gaze, because even productions with the best of intentions continue to privilege narratives of violence… The name Images and Complexes is meant exactly in the sense of ‘complicating’ these images from various points of view, and decentralizing this representation.”

Ludmila Oliveira, also coordinator and curator of the festival, and a resident of Manguinhos, further explains the motivation of the festival: “What we have here is something unprecedented, because I have never seen a festival that gives prominence to works coming from favelas… The idea is to emphasize who is directing the film, ensuring that they are from the favela.”

The festival also nurtures exchanges between favela-based film producers who would otherwise have no space or platform to discover each other’s work, let alone participate in creative exchange and debate. The hope is to cross the divide between communities, which remain segregated due to lack of access. The vast majority of viewers who came to the screenings were favela residents. For many, it was their first time in Manguinhos, and likewise their first time in a movie theater located within a favela. Indeed, Cine Manguinhos is one of only two favela-based cinemas in Rio. 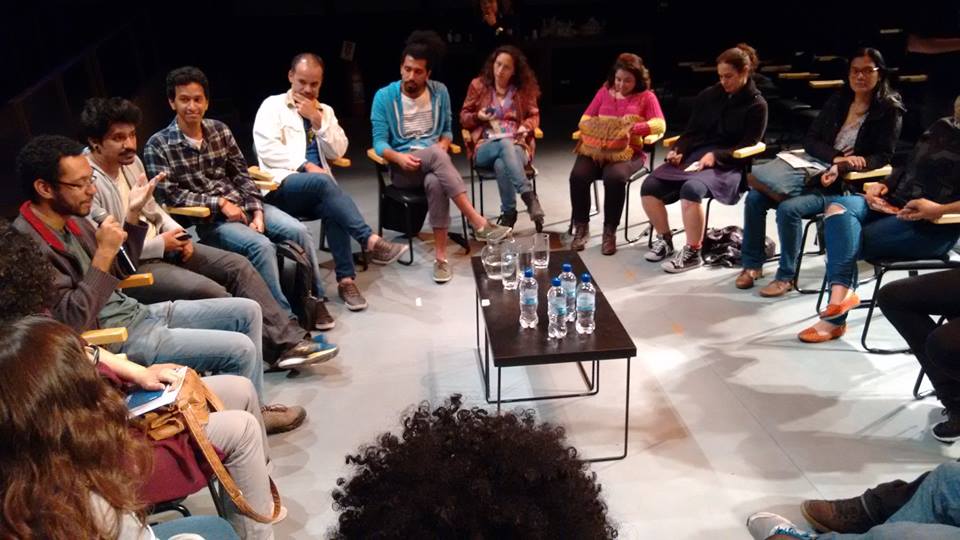 The film festival accepted applications from August 1 until August 31 by way of an online form advertised on the festival’s Facebook page and in articles published by several online news sources. Applicants were free to submit productions of any quality, even material filmed with cell phones. The final selection of 30 films was announced on September 12.

Once the team of five curators selected the films that would be screened at the festival, they noticed common themes and decided to group the films accordingly in the program. The themes included: women directors in favelas; the gaze from within; poetry and complexes; the environment; fiction; housing; and the real and the symbolic.

The selected films presented a diverse range of genres, including documentary, drama, and experimental. In the women directors theme, Favela que me viu Crescer (The Favela that Saw Me Growing Up) documents the lives of a group of elderly women in the Jacarezinho community.

Also in the women directors theme, Na Maré da Copa (In the Maré of the World Cup), directed by community journalist Miriane Peregrino, documents the military occupation of Complexo da Maré during the 2014 World Cup.

In the “gaze from within” theme, the documentary Quem São os Makers da Favela? (Who Are the Makers of the Favela?) by the GatoMÍDIA collective explores the innovative and do-it-yourself culture of favelas and came about through their media and technology residency hosted earlier this year.

The complete festival program can be viewed here, and most of the films are available to view on YouTube.

The event concluded on Sunday October 2 on a bittersweet note, as the final day of the festival also marked the last day of Cine Manguinhos, also known as Cine Teatro Eduardo Coutinho. Founded in 2014 by Favela Criativa, the project’s two-year contract has now come to a close. There have not yet been any announcements regarding how the space will be transformed for a different use in the future, or if there is any hope that the cinema will return to Manguinhos. The center was named after prominent Brazilian filmmaker and documentarist Eduardo Coutinho.

At the end of this month, the Images and Complexes collective will release a catalog of all 30 films including a brief synopsis, name of director, release date, and location. Additionally, the curators will highlight five films in particular in the catalog with an in-depth review. The catalog will be printed and distributed for free, and will also be available online.