For the original article by Rafael Soares in Portuguese published by Extra click here.

When he arrived in Complexo do Alemão in the North Zone of Rio, in the late 1980s, the retired master builder, now 72, had to transform a single-room plaster house into the family home. Slowly, he strengthened the foundation, built rooms, and outfitted the kitchen and living room. In the house, located in Praça do Samba, his two daughters were born and raised. Even with health problems–he had to have a leg amputated and his wife, at age 65, had an aneurysm–the couple had plans this year to expand the property so that one of their daughters could move to the second floor. Two weeks ago, with construction material already bought, the dream had to be postponed: in the midst of a firefight, Military Police with rifles climbed onto the roof and didn’t leave.

Since then, three Nova Brasília police officers from the Pacifying Police Unit (UPP) have taken shifts there. From the rooftop, they shoot at drug traffickers, protecting themselves from gunshots behind a refrigerator the family kept there–and that stopped working–and they relieve themselves there: several bottles of urine sit on the roof. EXTRA visited Praça do Samba last Thursday morning. At the time, in addition to the home of the elderly couple, Military Police officers occupied the second floor of a neighboring property. Three other families affirm their homes have also been invaded. 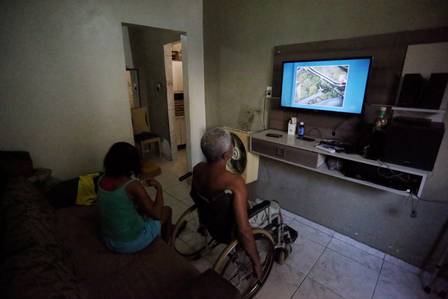 Their children took the elderly couple out of their home because of the crossfire, but they wanted to return. Photo by Fabiano Rocha / Extra / Agência O Globo

“This house didn’t have any bullet marks. They came in, we became targets. I don’t let my parents stay in the room because I’m afraid gunshots will come through the wall,” says one of the couple’s daughters, who, fearfully, took her parents out of the favela for a week. Longing for home, the couple asked to return.

In place of a window, a brick wall

Praça do Samba is currently Complexo do Alemão’s number one conflict zone. According to locals and police officers consulted by EXTRA, until the beginning of February, the police hadn’t arrived at the location, dominated by drug traffickers and located 300 meters from the main base of the Nova Brasília UPP station and the 45th police precinct (Alemão). From then on, the UPP commander, Major Leonardo Zuma, decided to build an armored base there. The invasions began just as construction began. 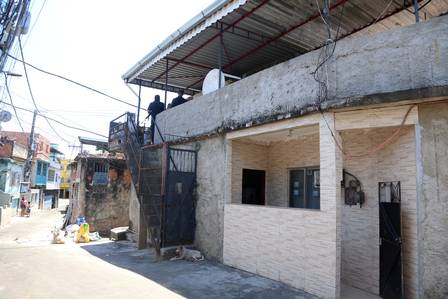 After the invasion by police officers, the house became a target. Photo by Fabiano Rocha / EXTRA

Two elderly siblings–he, 81 years old; she, 93–live in a property next to the future base. The second floor, which was empty and would be rented to a relative, became a lookout point used by police officers who entered without asking permission. Days after the invasion, the retired mason was surprised by a change in the façade: in place of the large window, a brick wall was built. Through a hole, you can only see the rifle’s barrel. Since then, the house has been hit by more than 20 gunshots.

“I’m alone. My sister got so scared by the gunfire that my niece took her out of here,” says the resident, who doesn’t even speak with the police, saying he lives in fear. 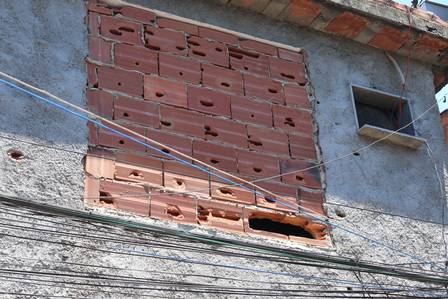 Large window filled with bricks after the arrival of the Military Police. Photo by Fabiano Rocha / EXTRA

To the police, a ‘war zone’

The 74-year-old housewife can’t sleep. The family matriarch lives in a three-story house with 14 other people: daughters, grandchildren and great-grandchildren. According to her, when night falls, the police break past the wall and climb up on the roof.

“They step hard, make noise, fire shots. You can’t get to sleep. I wanted to get out of here, but we have nowhere to go,” says the elderly woman. 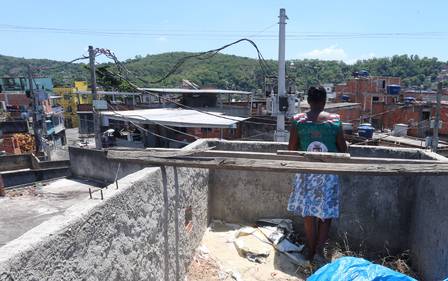 A 74-year-old housewife is no longer able to sleep. Photo by Fabiano Rocha / EXTRA

Hours before EXTRA arrived at Praça do Samba, a police officer was shot in the leg at the location. Even the agents on duty say they don’t like working there: “It’s a war zone over there.”

In a statement, the Nova Brasilia UPP’s command alleges that one of the occupied houses “served as a lookout point for criminals and a place for the preparation and hiding of drugs.” Another “is empty and being used by the Military Police officers until construction of the base is completed.” All the houses visited by EXTRA have owners.

The case is under investigation by the Public Prosecutor’s Office. Residents went to testify after contacting Defezap, a channel to report abuses by government agents. Complaints are filed by WhatsApp: (21) 99670-1400. 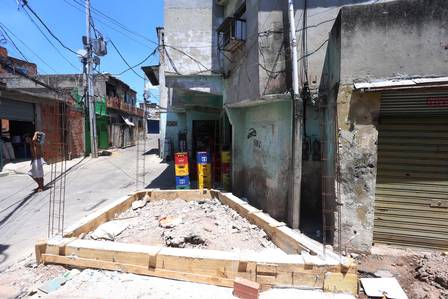 UPP police base is being built in the Praça do Samba. Photo by Fabiano Rocha / EXTRA

This article was written by Rafael Soares, and published on March 8, 2017.
Translation provided by Adam Lee. This article originally appeared on Jornal Extra. in #HousingWatch, #ParticipationWatch, #UPPWatch, *Highlight, Translated by RioOnWatch, Violations