For the original article by Anne Vigna in Portuguese published in Agência Pública click here.

In comparison to the Canto and Mello Condominium, the houses of the Horto favela seem small and hidden in the middle of the forest. In the last decades, around the favela—where the majority of residents make at most up to three times the minimum wage (about US$800/month)—private houses have emerged and grown in the federally-owned forest. They are not only different from the favela community in size and in value—they also receive drastically different treatment under the law..

Built in the 1980s, the Canto and Mello Condominium is partly located within the area of the Botanical Gardens, above the 200 meter protection line, which means it is within a designated environmental protection area and risk zone where construction is prohibited.

After a long civil suit from the Public Prosecutor’s Office and the Municipality of Rio, the courts prohibited the construction of more houses on the site. The technical report states that “the environmental damage provoked by the defendants was accentuated during the twenty-plus years of court proceedings, so that at the time the case was brought in 1991 there were only 8 houses, but by 2003 during investigations of the area, another 17 buildings had been erected, and the twenty-sixth, already in breach of the judicial decision, was under construction.”

In 2012, the condominium was recognized by the Rio de Janeiro Court of Justice (TJRJ) in exchange for a fine for environmental damages. The condominium administration appealed and the dispute is still being decided in the Federal Supreme Court; therefore, the exact amount has yet to be determined. The reasoning used to guarantee the condominium’s permanence is no different from that used by the two thousand residents of the Horto favela currently threatened with eviction, where there are already 200 applications for land repossession granted by the courts.

“Our case invoked the right to housing in the Federal Constitution, since this was public land,” explained Felipe Amorim, the lawyer for the Canto and Mello Condominium. “It was their right to build the houses; thus, if the houses were demolished, these families would have had nowhere to live. This was one of the arguments used to convince the Court not to demolish the houses.”

The Canto and Mello Condominium is formed by a road that inclines abruptly. Moving up the hill, one understands the technical report’s mention of a “45-degree incline and reaching the 200 meter limit.” With a security post and guard at the gate, no uninvited guests can enter the site. Nevertheless, numerous vans and motorcycles climb the hill constantly to bring supplies and building materials to the top. Looking at the 26 houses (truthfully, mansions), one can imagine the size of the construction sites and their environmental impact. 75,000m2 of forest was razed to make room for the condominium’s buildings, according to the judicial report. “But now it’s green, it’s preserved, and they take care of the environment,” explains the condominium lawyer. 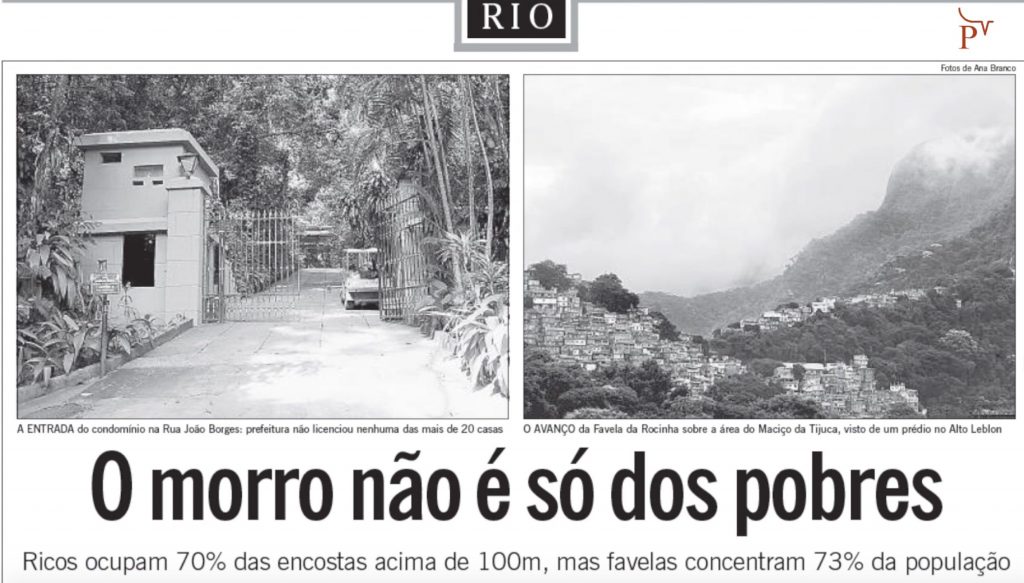 2009 article from the newspaper O Globo, about the irregular situation of the Condominium Canto e Mello houses. On the left, the entrance to the condominium).

It’s true: the condominium is green and calm, with a view of the blue ocean. It sometimes seems that nature and the houses are one and the same. The lawyer assured journalists that the residents have taken action to ensure environmental conservation, but had not sent further details by the time this article was published. In addition, Pública was not permitted to enter the grounds.

The fact is that the condominium is occupying a forest reserve—and area of risk. Because of this, the Rio de Janeiro Court of Justice reasoned that, even though the condominiums constitute illegal constructions, destroying the houses would prove even worse for the environment: according to an expert, the demolition of these buildings would be “an extremely radical measure,” because “the local biofragility would not support such interventions (demolitions, machine and truck movement, etc.).”

For the inhabitants of Horto, a (hundreds-year-old) favela community under serious threat of eviction ever since the management of their territory was passed to the Botanical Gardens (read more here), the differential treatment of the condominium and the favela has called their attention. According to socioeconomic research from the Faculty of Architecture and Urbanism at the Federal University of Rio de Janeiro (FAU/UFRJ), more than 60% of Horto residents make up to three times the minimum wage (US$1000/month), 20% make five times (US$1600) and about 3% make from five to eight times.

On one side, housing rights of residents in the Canto and Mello Condominium were recognized to avoid the “extremely radical measure” of expulsion from the site. On the other, Minister Raimundo Carreiro of the Federal Court of Accounts (TCU) preemptively affirmed that the residents of Horto should be “relocated within the Minha Casa Minha Vida (My House My Life) housing program.” Last November the TCU decided to take full control of the land where the favela is located, under the Botanical Gardens’ administration. In an interview with Pública, the Garden’s director Sérgio Besserman made it clear he wants the community off the land.

The problem, says Besserman, is that the community will expand. “Is it fair to take this beautiful forest that is public land and permit a small group of people to live there, with the absolute certainty that in a short time this forest will not exist anymore?” he asked.

Laws for Rich, Laws for Poor

On the same public land, a private club named The Monkey Club, or Club 17, entertains residents of Jardim Botânico and Gávea, two of the most expensive neighborhoods in Rio. Founded in 1964, the club has three pools, tennis courts, and banquet halls that host nighttime parties—right in front of the house of Ms. Olívia da Silva Alves, who has lived in the community of Horto for 60 years. “Why has the club never had a problem with the law, and yet we do?” she asks. Those who wish to become club members have to pay R$10,000 (US$3,200), in addition to a monthly fee of R$300 (US$100) per month.

“Everyone else can stay, except for the favela. The rich can expand their houses, but not the poor,” comments Emerson de Souza, president of the Horto Residents Association (AMAHOR). “Here in Brazil, there are different laws for the rich and for the poor”.

Emerson took Pública to see another condominium near Horto. Inside the Parque da Cidade (City Park)–another official Conservation Unit–there sits an irregular condominium that also belongs to the Canto and Mello family.

According to park guards, in only a few years this condominium has grown from two to fourteen houses. However, the Municipal Secretary of Environmental Conservation—who confirmed to Pública that the condominium is inside the conservation area—does not see a problem. “There is no recent growth in the quantity of houses within the Conservation Unit, but there have been improvements and vertical expansions made on preexisting buildings in the area,” the Secretary said in an email.

Testimony from the guard of the Parque da Cidade from Agência Pública on Vimeo.

Horto’s residents are worried about their future because they have not forgotten about the 1990s’ eviction of a community of twenty houses located close by, on Sara Vilela Street next to the Tijuca Forest. “[They were evicted] under the same argument of environmental conservation,” explains Emerson. “Now these families are in a mangrove in Jacarepaguá (a distant neighborhood in the West Zone) and the rich families have expanded their mansions right into the same environmental protection zone.”

In place of the former community, today one finds the condominium known as Alto Jardim Botânico (High Botanical Garden), which has its own association and differentiated security service. It is one of the access points to Tijuca National Park. Among the land owners is the Mariani family, owners of the former Banco da Bahia (Bahia Bank), today known as Banco BBM. In his Master’s thesis on urban environmental engineering at Rio de Janeiro’s Pontifical Catholic University (PUC-RJ), Tomás Mariani, head of the Botanical Gardens Friends Association, wrote about the “expansion of favela areas and the risk around Tijuca Park.” Amidst 100 pages of research, there is not a single mention of the growth of condominiums and luxury mansions. Mariani declined requests for an interview with Pública.

For Ernesto Viveiros de Castro, Director of the Tijuca National Park, the High Botanical Garden condominium poses a concern: “There is urban expansion within forests close to the park, but not within the park. This worries us because, with less forest around the park, the park is less protected.” The director confirmed that the latest house of the condominium, which is still under construction just a few meters from the entrance trail, “received a permit from the Municipal Department of Urbanism, Infrastructure, and Housing.”

The house in question has a famous owner, former Congressman Índio da Costa, who is the current municipal Secretary of Urbanism, Infrastructure and Housing for Rio de Janeiro. According to the park director, da Costa had already received “permission to construct and cut trees before becoming the new secretary.” A report in Veja magazine states that the property, estimated at R$8 million (US$2.5 million), will have three floors and measure 841m2 upon completion.

The deforestation caused by the construction is being watched over by the State Prosecutor’s Office. The office is currently negotiating a new Conduct Adjustment Term (TAC) to provide compensation for the fallen trees on the 1,800m2 area.

When asked by Pública, da Costa did not respond to questions.

This article was written by Anne Vigna, and published on April 18, 2017.
Translation provided by Suzanne Caflisch. This article originally appeared on Agência Pública. in #EvictionsWatch, #HousingWatch, *Highlight, Translated by RioOnWatch, Violations