The eight Martín Peña communities’ struggles are reminiscent of the experience in many Rio favelas and similar communities around the world. In the 1930s, a devastating hurricane season forced rural workers into unemployment and migration to San Juan surged. Faced with a housing shortage, migrants eventually built 5,000 informal homes along the Martín Peña Canal, which was a major economic and transportation artery through the city. Today, the communities’ population nears 30,000 and it is the most densely populated area in Puerto Rico.

The canal became so polluted that it stopped flowing. Sections of the canal that used to be 60-120 meters wide are now maybe one meter wide, and filling has reduced depth from 2.5 meters to a less than 10 cm. In a 2015 report, the US Environmental Protection Agency (EPA) estimated that over 3,000 buildings still discharged raw sewage into the canal.

An aerial view of the Martín Peña Canal in the 1930s, showing the extent of mangrove swamps that once lined the canal.

An aerial view of the Martín Peña Canal in the 2000s, showing that almost all mangrove swamps have been filled, and the canal is significantly narrower.

Before work began, two employees from the Transportation Authority visited the communities to talk with residents about the project. Under their leadership, the government ultimately held 700 participatory meetings in the communities from 2002-04. In the meetings, experts responded to community concerns and presented on legal tools to preserve affordable housing and formalize landholdings.

Residents were united in wanting to ensure that dredging the canal and the revitalization that would accompany it would not serve to displace them. Their top priority, like many in Rio favelas, was to maintain their community. Residents decided a Community Land Trust model was the best way to achieve their goal because there would be a collective, rather than individual, land title. Meeting participants also developed a plan for the District comprised of the eight communities. This Comprehensive Development Plan would guide the project going forward. 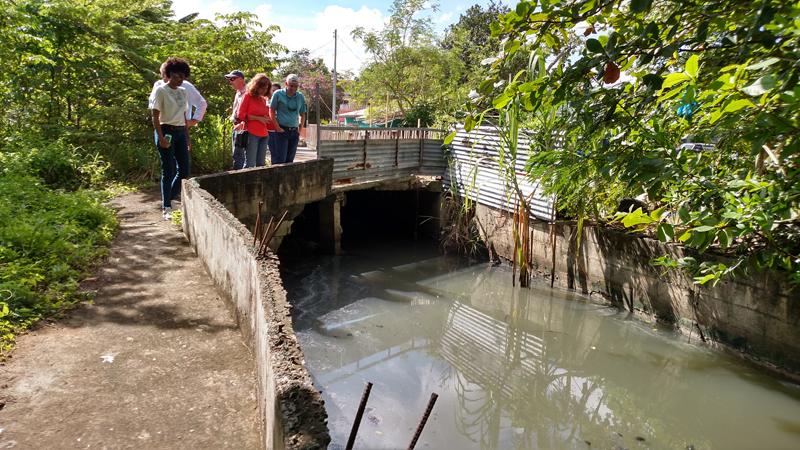 Caño Martín Peña at Israel and Bitumul communities where sewage flows into the channel.

In 2004, residents created the Group of Eight Communities (G-8), a non-profit corporation, to promote their economic, social, and community development throughout the establishment and maintenance of a CLT. The G-8’s board is comprised of representatives from 12 community organizations who are chosen annually in community assemblies. Today, the G-8 facilitates communication between ENLACE and the CLT, and ensures compliance with the Comprehensive Development Plan.

In September 2004, San Juan passed Law 489/2004. The law, informed by the Comprehensive Development Plan, created the Martín Peña Canal Special Planning District and public corporation ENLACE, and provided for the future incorporation of the CLT.

The District refers to an area including seven communities along the canal that would make up the CLT.

ENLACE is an arms-length, limited-lifespan, independent government agency that oversees and coordinates project implementation and is mandated to be “responsible for coordinating the implementation of all aspects of the Project: including…housing development, infrastructure, the dredging and canalization of the Canal, as well as urban and socio-economic development” and “to guarantee mechanisms for citizen participation in the planning and execution of the ENLACE Project and promote community empowerment.”

The Governor of Puerto Rico and Mayor of San Juan appoint ENLACE’s board of directors, which is made up of representatives from the public and private sectors and of community residents. The mayor and governor select community resident board members, which must make up at least 45% of the board, from a list of candidates prepared by the G-8.

Sign posted outside the acquired house lets residents know not to build in this area and marks the future width of the channel.

The CLT is Formalized

Prior to Law 489, most housing in the District was informal—residents had built houses without official permission on government land. To create a CLT, land holdings had to be regularized and title transferred from the government to the CLT. Under the new Law 489, title to any land in the District owned by Puerto Rico or San Juan now automatically transferred to ENLACE.

Prior to transferring title to the CLT, ENLACE worked to regularize property rights. Residents were granted surface right deeds with a right to inherit and maintain ownership of their home, while ENLACE retained title to the land beneath. This separation insulates residents from rising real estate values—they are able to capitalize on the rising values of the home itself, but not of the land underneath.

Per Law 489, ENLACE would transfer land title to the Community Land Trust that would be created, only after regulations governing the CLT’s operations were established. From 2006-2008, the G-8 and ENLACE organized three rounds of community workshops to develop the CLT’s General Regulations. An Advisory Board and lawyers supported the process so that residents’ needs and requests would be formalized legally.

The General Regulations were promulgated on Oct. 21, 2008.  They stress the CLT’s role as a “mechanism of collective possession in order to solve the problem of the lack of ownership titles” and to “avoid involuntary displacement” of canal residents. This reflects the purpose of the CLT set out in Law 489: “to contribute toward the solution of the ownership rights problem of many district residents through collective land-holding.” With Regulations complete, ENLACE transferred the land to the CLT by formal deed on May 14, 2009.

How the CLT Operates

The CLT has been operating successfully under the Regulations for eight years, and in partnership with ENLACE has made significant progress towards being self-funding and relocating residents humanely and as necessary to dredge the canal. In 2015, it won a Building and Social Housing Foundation World Habitat Award recognizing it as a model for other informal communities.

The CLT is run by an 11-member board of trustees which has a duty to administer the CLT for the community’s benefit. The G-8 selects a total of six board members: four who are residents and leaders of community organizations and two who need not be residents or leaders of community organizations. The board of directors of ENLACE chooses one of its own members, who is neither part of the G-8 nor the government, to serve on the board. The CLT’s board itself chooses another two members. The Mayor of San Juan and Governor of Puerto Rico each appoint a government representative to the board. Additionally, the president of the G-8 serves as a non-voting member of the board.

According to the Regulations, the CLT must work to resolve land title problems in the District, avoid involuntary displacement of residents, acquire and maintain properties for the community’s benefit, and facilitate resident involvement. When working toward these objectives, the CLT must follow guiding principles, which include promoting resident participation in decision-making; encouraging equality, safety, and access to basic services; and improving public spaces and transportation.

Among the CLT’s most important duties is developing housing and keeping it affordable. To make sure the CLT achieves this goal, the Regulations provide that the CLT cannot resell land and can only sell or rent housing for the members’ benefit. When a resident decides to sell, the CLT has an option to buy back the home, so that it then resells the home at an affordable price. When residents mortgage their homes, the CLT appears on the mortgage and has the option to buy back the home if the resident defaults on loan payments. To support residents with loans, the CLT also provides financial education to families.

The CLT aims to be fully self-funding once relocations are complete and ENLACE’s lifetime has expired. The CLT makes money from selling homes, renting property, investing in the community, and receiving donations. Regulations require that the CLT reinvest profits into the communities through a revolving fund for infrastructure projects, buying property, and other priorities set in place by the Comprehensive Development Plan.

Currently, the CLT receives significant subsidies from both the public and private sector. The CLT also relies on a significant amount of volunteer work to meet its budget. While these two factors could leave potential for long-term financial instability, the CLT has been stable to date.

One of ENLACE and the CLT’s most difficult tasks is relocating residents whose homes were so close to the canal that they must be removed for the EPA to dredge the canal. In total, 1090 households must be moved; so far, ENLACE has successfully relocated 110. 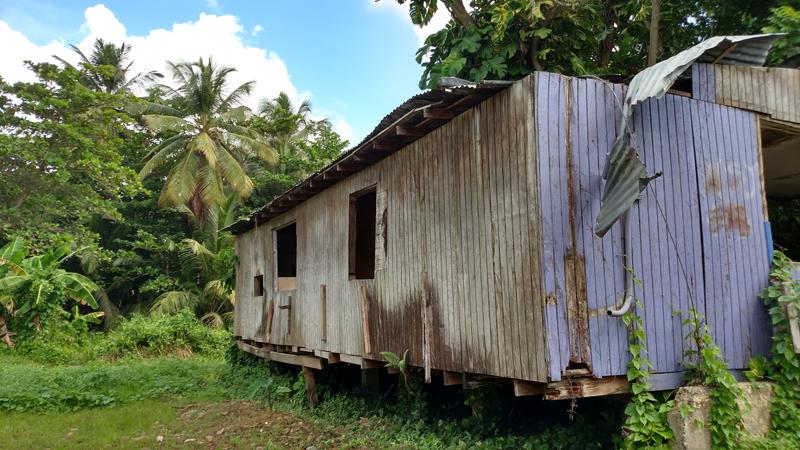 A house purchased by ENLACE that will be demolished to allow for canal restoration.

This article was written by Laura Bachmann, and published on April 28, 2017.
in *Highlight, by International Observers, Policies, Solutions