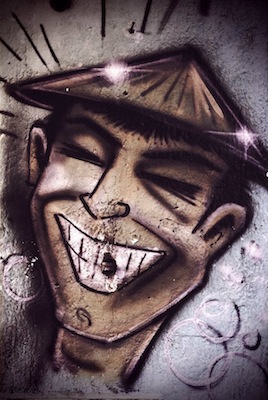 “Are you coming to Jaca?” asked Raylton, a rapper from Cantagalo bouncing up and down on fellow hip hop artist Tigrin´s shoulders at the bottom of the South Zone favela in Ipanema last Thursday evening. “Yeah yeah, c´mon, let´s go” replies Tigrin, shrugging him off as we go to take the metro into the North Zone to the Jacarezinho favela, the unlikely location of a hip hop and poetry event attracting artists from all over the city.

Organized by Agência de Notícias da Favela, the event Ritmo e Poesia (Rhythm and Poetry) has been bringing together poetry from the asfalto, ‘asphalt’ or formal city, with poetry from the favela, or informal city, in a fortnightly explosion of beats and rhyme since August last year. Poets, rappers and hip hop artists from all sides of Rio spit words in an innovative open mic event that brings them into one of the city´s most dangerous and marginalized communities.

Arriving in Praça da Concórdia at nightfall, the sound system and stage is set with the base track´s throbbing bass and compere Dudu Pereré reciting biting poetry under the streams of fluttering bunting that cover the square. Member of the Lapa poetry collective Ratos di Versos, Dudu´s engaging presence and effortless gliding between poetry, hip hop and funk has held the open mic vibe together since the event´s humble soundbox and a mic beginnings. From odes to the power of words to funk raps citing wealthy neighborhood Leblon, government benefit program Bolsa Familia and Louis Vuitton bags in the same breath, Dudu’s vocal delivery and sharp wit make him a perfect host of an event that mixes worlds of words.

Inequality, police brutality, violence and corruption are common themes amongst the poets and rappers who take to the mic. Last Thursday, hip hop artist from Caxias, Pevirguladez performed his track ´Eles Não Moram No Morro´ – a savage verbal attack on police and government treatment of the favela set to a samba inflected backing track – to a whooping crowd. Negra Ré, a fiery female rapper from Favela Arara and REP regular, delivered tight rhymes with a singalong chorus on the theme of money: “If you don´t have it, you’re ******.”

While social commentary forms a powerful theme amongst performers, self expression, cultural celebration and narratives of the everyday are all popular subjects. BBQs, the beach, partying and love for Rio de Janeiro all get a nod from Cantagalo´s Raylton and Tigrin flowing descriptions of the vida louca. 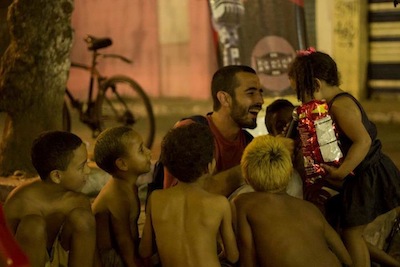 At one point a group of young kids bursts into the center of the square and court the microphone as Dudu passes it round for them to shout their line at a time. A guest rapper then launches into funk classic ´Eu só quero é ser feliz´ with the youngsters singing enthusiastically along to the lyrics ´All I want is to be happy, to walk in peace in the community where I was born.´

Their community, Jacarezinho, lacks peace. The third largest favela in Rio after Rocinha and Complexo do Alemão, Jacarezinho is often cited as one of the city’s poorest and most dangerous. Having successfully resisted removal several times in its 90-year history, Jacarezinho today is marked by a lack of government services, the strong presence of the heavily-armed controlling drug faction and its business, and frequent police invasions.

Holding a hip hop and poetry event in this context is a type of cultural resistance, says Ritmo e Poesia filmmaker Samuca whose website Rio Underbelly explores the often undiscussed sides of the city: “It´s about opening the doors to one of the most feared and maligned favelas in Rio to show the qualities that exist in non pacified favelas and its type of cultural defense to counter the almost weekly raids by BOPE and CORE. It´s a forum for liberal expression, artistic communication and dissemination of news.”

Organizer André Fernandes from Agência de Notícias das Favelas agrees, saying “We wanted to do something no one else was doing, bringing cultural [exchange] in before the police come in.” He goes on to praise participants from the community and emphasize the potency of viewing favela lyrical forms as poetry. He says, “People think it´s [just] rap, hip hop and funk but we can see that they´re poets. There are a lot of poets in the favela.”

While last Thursday´s event marked the last Ritmo e Poesia with support from the State Secretary of Culture, André and his team plan to continue the event in the new location of Morro Azul, the hill where the Jacarezinho favela was first founded, with the next edition on Thursday May 31st, starting at 8PM.

This article was written by Felicity Clarke, and published on May 24, 2012.
in Event Reports, Favela Culture, Solutions, Understanding Rio