The Rio de Janeiro known internationally—the South Zone neighborhoods of Copacabana, Ipanema, and Leblon and the historic center of the city—make up a tiny fraction of the Greater Rio Metropolitan Region. Most tourists do not travel out of these areas, or even to other zones (the majority) of the Rio de Janeiro municipality, much less the full region. However, the expanse covered by Greater Rio includes 21 municipalities, multiple cities, and 74% of the state of Rio de Janeiro’s population or 12.6 million people. It is known as a conurbation, or an area consisting of multiple urban centers that have developed and merged with each other to create a single labor market with an integrated transport system.

Map of the Rio de Janeiro Metropolitan Region. Yellow represents the municipality of Rio, with the red circle surrounding the areas tourists are familiar with: South Zone & Center.

Mobility has been a serious challenge for the municipalities of Greater Rio. The Rio municipality concentrates 75% of the metropolitan region’s jobs. Many residents spend up to 2 or 3 hours a day commuting to the center of the city, leading the Brazilian Institute of Geography and Statistics (IBGE) to refer to the municipalities of the Baixada Fluminense region north of Rio proper as “dormitory cities.” Greater Rio has the highest home-to-work transit times of any metro region in Brazil. This dynamic has not been helped by recent transportation investments. Beginning in 2012, the implementation of the Bus Rapid Transit (BRT) system has favored connecting wealthy areas such as Barra da Tijuca, a center of real estate speculation, to the center of the city and its international airport over serving the broader metro area. The BRT lines have also acted as a force for eviction of communities in their paths, dislocating tens of thousands of families further, not nearer, to their jobs.

With these challenges in mind, the Instituto de Pesquisa Econômica Aplicada (Institute of Applied Economics Research—Ipea) convened a panel entitled “The Future of Urban Mobility in Rio de Janeiro” on Monday, November 8, in collaboration with the University of Oxford’s Transportation Studies Unit. There, three Rio-based professors and policymakers presented visions for moving forward on intermunicipal transportation in Greater Rio to an audience of other experts, scholars, and politicians.

Romulo Orrico, Professor at the Alberto Luiz Coimbra Institute of Engineering Graduate Studies and Research at the Federal University of Rio de Janeiro (UFRJ), was the first to speak. He began by outlining three emerging trends in urban transportation: the electrification of vehicles due to falling costs of high capacity batteries, the connectivity of transit on the Internet of things, and the growing autonomy of mobility systems. For Orrico, the critical question is how these three advances will integrate with local urban conditions. He proposed three models based on the directions other world metropolises are heading. One was that of a “clean and shared” transit system with high capacity public transportation, such as is developing in dense, developing cities like New Delhi and Mexico City. In contrast, the “private autonomy” model takes hold in sprawling, wealthy cities like Los Angeles, where electric cars are gaining popularity. The last is a “continuous mobility” model in which people and services move easily through a combination of public and private transportation, with Chicago and London as examples.

Orrico said he believes the “clean and shared” model is best for Rio, but it faces the issue of being highly spread out in comparison to other dense, developing cities. He showed slides which demonstrated the inequality in access to efficient public transportation between peripheral urban centers, like Nova Iguaçu and Duque de Caxias. Taking a car between these two locations takes 36 minutes. The train, with no direct route, takes 2 hours and 20 minutes. He also showed how local trips within a given peripheral urban area are similarly difficult. In Madureira, which benefits from multiple train lines connecting it to Rio’s city center, a short trip of several kilometers by bus requires a transfer because transportation is not oriented toward this kind of travel.

His solution to reaching the “clean and shared” model is supporting positive development of the urban centers beyond Rio proper, like São Gonaçalo across the Guanabara Bay. He said, “It is an unequal territory. The [transit] flows indicate a high dependency on the center. We are not going to be able to continue this history of going to and from the center of Rio. São Gonçalo has one million residents. It has no public university. Not one. Zero. So, I can’t say that we should make it easier for them to come to the center… [We need] to create opportunities within São Gonçalo.” Orrico hopes for investments in transportation transversal to the current metro and BRT lines. He concluded by saying that only through positive development of Greater Rio’s periphery and by facilitating shorter public transit journeys can the metropolitan region combat urban sprawl and positively integrate new technologies. 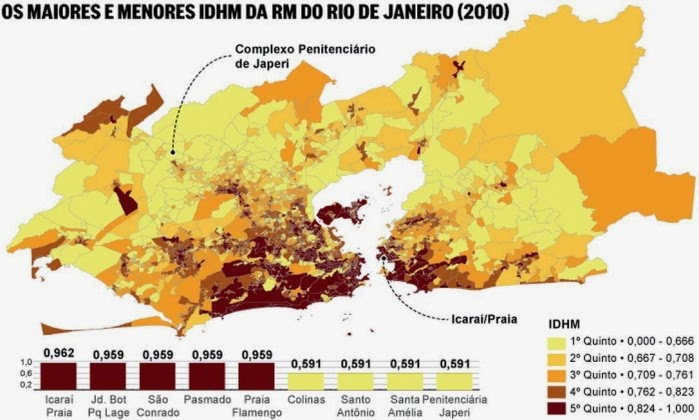 The next speaker was Vicente Loureiro, the Executive Director of Rio’s Metropolitan Chamber. He argued his points along similar lines, beginning with a provocation. “Maybe the future of mobility isn’t only in the area of mobility,” he said. “It’s time to break definitively with this prevailing thought that the questions of transportation and mobility revolve only around this field.” Loureiro explained that the reality of Rio’s transportation infrastructure is that resources are thin and construction is slow. He proposed addressing the root causes of peripheralization and transportation inequalities in Greater Rio.

In doing so, Loureiro spoke to the history of urban growth outside of the Rio municipality. “Remember that one of the reasons for this uncontrolled peripheralization is found in the statistic that 85% of existing homes in the metropolis are single family. Because people are able to build only like this, where was the great majority of the population during the past years able to build their homes? In the favela and on precarious allotments in the periphery… This is the genesis of the process of urbanization that we are living today.” A lack of affordable housing has pushed people to settle the rural lands at the edge of Greater Rio. Loureiro said that every year, another 25 square kilometers of rural land is occupied this way.

He said this expansion has resulted in less density than in other world mega-cities, meaning Rio’s Metro and BRT lines serve fewer people per distance of service than transit systems in denser urban environments. For Loureiro, multi-centrality and investment in services in peripheral areas is key to improving the transit system as a whole. According to him, close to 50% of public transit trips are made to reach educational or health facilities. This means the unmet needs of the metropolitan region’s population overload an already deficient transport system. He used access to areas of recreation as an example. “There is not one public park greater than 10,000 square meters outside of the São Bento Park in Niterói in the metropolitan region. Even to have a picnic on Sunday you have to come to Rio.”

Loureiro believes that Rio must invest in a poly-centric model and extend social services to peripheral areas if Greater Rio’s transportation system is to survive. He used Barra da Tijuca, site of the 2016 Olympic Park and many gated condominiums, as an example of unsustainable urban planning to be avoided. “Those who live there don’t work there, and those who work there don’t live there,” he said. Loureiro and Orrico each proposed fighting to reduce the daily center-periphery migration, a fundamental change to the model of Rio’s growth. 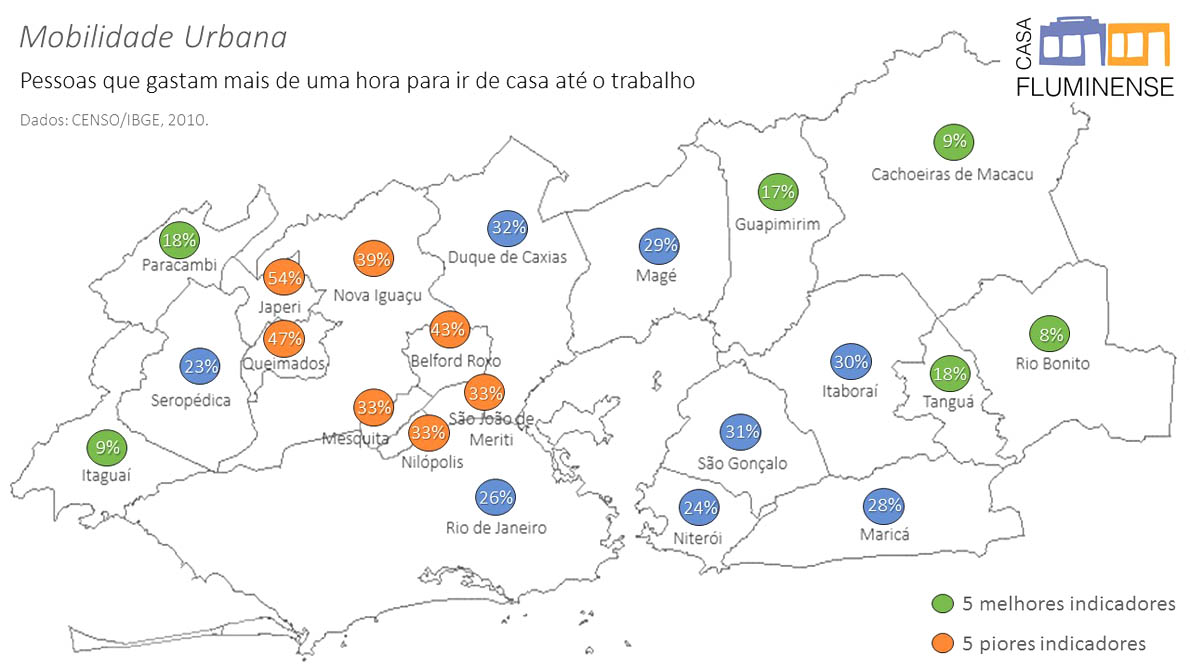 Percentage of residents that spend more than one hour commuting to work by municipality in Rio Metropolitan Area. Map by Casa Fluminense.

The last presenter of the evening was Fernando Mac Dowell, the Vice-Mayor and Transportation Secretary of the Municipality of Rio. Unlike the other two presenters, Mac Dowell spent most of his presentation discussing the transportation plans of Rio Mayor Marcelo Crivella’s administration, dodging the pressing questions of the Metropolitan Region as a whole.

These policies include efforts to modernize Rio’s port to allow for the entry of container ships with bigger drafts, or the distance between the water line and the bottom of the hull. Mac Dowell spoke briefly about Crivella’s efforts to make taxis more competitive in the face of the influx of ride-sharing companies like Uber, which include making taxis official cultural patrimony of the city and launching a Taxi.Rio app. The Vice-Mayor also presented research his office had completed showing that the speed of pedestrians is inversely correlated with their age. He intends to use this study in an overhaul of Rio’s traffic signals, with the goal of reducing traffic fatalities. Additionally, he said his office is working with the Metro Rio company to increase the efficiency of the metro system, which is operating at slightly reduced capacity because of the poor coordination of which lines use auto-pilot technology. Mac Dowell was one of the head engineers who planned and built the metro system in Rio beginning in the 1970s. During the presentation, Mac Dowell also showed a slide with a rendering of raised light rail technology and has argued elsewhere for its implementation in Rio, despite criticisms of the recently built (and still unfinished) VLT light rail in Rio’s historic center.

The Vice-Mayor did not address the issues of transportation inequality in Greater Rio that were discussed by the other two panelists. Responding to questions from the audience, Loureiro reiterated the need for multi-faceted projects and strong local governance with attention to issues affecting the metropolitan region as a whole, citing the examples of the Paris and New York metro regions as role models. Professor Orrico affirmed these statements, saying that Rio is at an “inflection point” in its development.