“The city’s decision to bid to host the 2016 Games was made based on a long-term vision: to grasp the opportunity that a successful bid would offer to transform Rio into a better city in which to live, work and visit… The Games could help to reduce geographic and social divisions and help better integrate the city and all its different regions.” — Rio2016 Legacy Booklet

“The biggest beneficiary will be the low-income worker, who lives in the most distant neighborhoods and spends more time in traffic.” — Rio2016 Candidature File

There is a long list of promised Rio Olympic legacies that were either abandoned before the Games began (see: every single environmental legacy) or that have effectively collapsed since (see: the pacification program; the under-used sports infrastructure). Transportation has stood out as the area in which the City of Rio delivered most of the tangible elements that were promised: three Bus Rapid Transit (BRT) corridors, a (still unfinished) light rail (VLT), and a metro line extension. With little official data to show the impacts of these new transport projects, the logic underlying the rhetoric of City and Olympic Committee officials seemed to be: ‘these routes didn’t exist before, and they do now, therefore urban mobility has improved!’

At an event on urban mobility organized by the Instituto de Pesquisa Econômica Aplicada (Institute of Applied Economics Research—Ipea) on Monday, November 6, researcher Juciano Rodrigues from the Metropolis Observatory explained that the emphasis on transportation served to legitimize the broader Olympics legacy discourse, “justify[ing] all those expenditures that were being made.” Yet the first panel at the Ipea event offered damning evidence and arguments to debunk government claims that these extensive recent transportation investments have had a transformative impact.

Rafael Pereira, a researcher at Ipea and the University of Oxford, outlined his rigorous investigation into the infrastructure’s impacts on urban mobility and argued that access to formal jobs and public high schools actually decreased from April 2014 to March 2017.

After collecting data on population distribution, on the distributions of public schools and formal jobs, and on the locations and schedules of public transportation in the Rio municipality, Pereira found that on average the percentage of formal jobs that were accessible to residents in less than a one-hour door-to-door commute dropped by 4.5%, while the number of public schools accessible in less than one hour dropped by 6.1%. In other words, compared to early 2014 when only one BRT line was open, today the average resident can access fewer work and educational opportunities within an hour from their home.

How is this reduction possible given the introduction of new transportation infrastructure? The problem, Pereira explained, stems from other changes to public transport between 2014 and 2017: the bus system underwent a process of ‘rationalization’ in which many lines were altered or cut, and a number of bus companies went out of business in the context of the financial crisis such that services were further reduced. The researcher concluded that “this reorganization of the system significantly reduced the potential increases in accessibility resulting from the legacy investments.” In fact, he and his colleagues re-ran the calculations for a “counterfactual” scenario, imagining that the legacy infrastructure had been introduced but these other changes had not happened; in this case, they found that the introduction of the new infrastructure would have increased people’s access to jobs and schools (by 13.4% and 11.7%, respectively).

As such, Olympics boosters might be tempted to argue that the transportation investments would have indeed left a positive legacy if not for the financial crisis, which was (mostly) out of City officials’ control. However, many cuts to bus lines were already planned to follow the implementation of the BRT routes; it is unclear how much of the reduction in bus services happened as a result of the crisis. As Rodrigues pointed out, a number of bus lines that were cut via the ‘rationalization’ process ran from the working-class North Zone to the wealthier South Zone, raising public protest at what was widely experienced as a deliberate effort to exclude poorer citizens from tourist areas. Adding a further critique of ‘rationalization,’ panel participant and Institute for Transportation and Development Policy (ITDP) Executive Director Clarisse Cunha Linke observed that the restructuring did not only mark a loss of certain bus routes, but also disrupted the population’s “effective reading of the city,” as residents lost the sense of security, familiarity, and even identity as citizens that came from knowing which buses went where.

Regardless of the impacts of the economic crisis, Pereira’s research also shows that the legacy transportation infrastructure was always going to benefit residents of higher-income areas more than residents of lower-income areas. The biggest beneficiary was therefore not, as claimed in the Rio2016 candidature files, the “low-income worker who lives in the most distant neighborhoods and spends more of their time in traffic.” Even in the counterfactual situation in which Rio de Janeiro avoided a financial crisis, wealthier neighborhoods stood to gain more from the legacy investments. 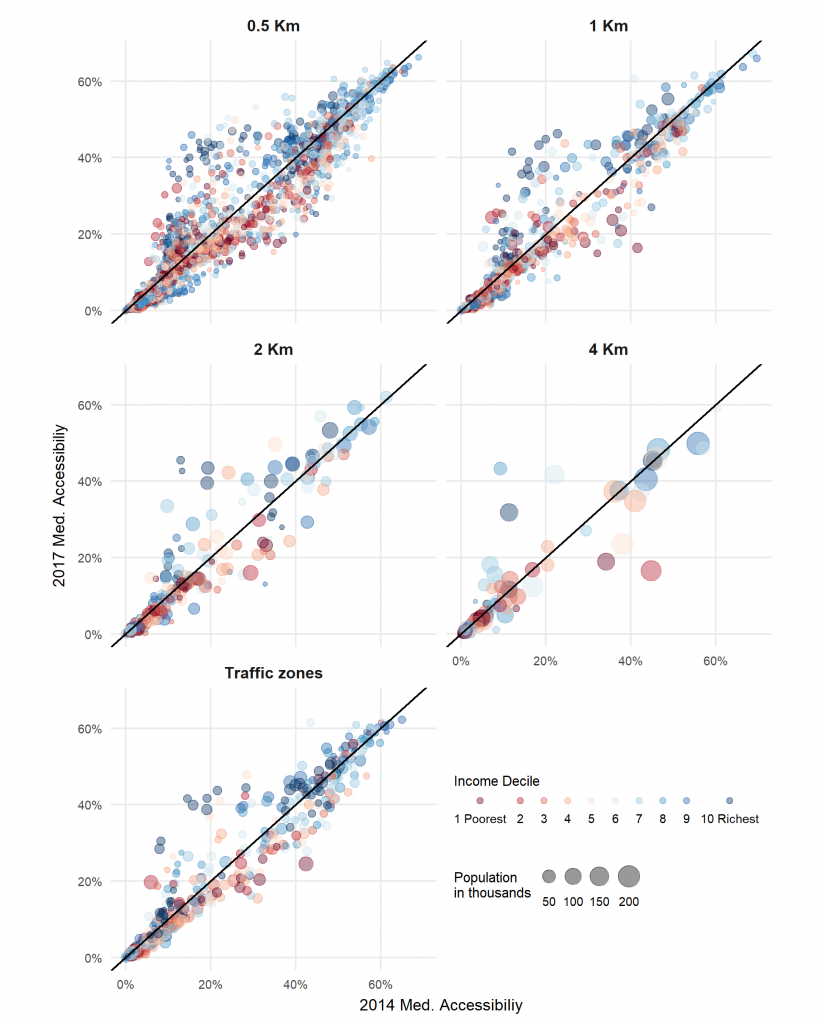 These graphs show most of the areas that saw increased access to formal jobs (represented by bubbles above the diagonal line) were higher-income neighborhoods (represented in blue). Lower-income areas (represented in red), in contrast, more frequently fall below the line, which means their access to jobs decreased. Graphs from Pereira et al., In Press.

ITDP’s Clarisse Linke argued it is essential to study these kinds of data in terms of spatial distribution on maps, because “one number alone does not tell a sufficient story for us to really discuss public policy in Rio.” She noted that between 2010 and 2015, the percentage of Rio’s population living within one kilometer (a roughly 15-minute walk) of public transport improved significantly, but breaking down these data by location and income level showed substantial inequalities, with lower percentages for low-income neighborhoods and for residents of the greater metropolitan area.

One audience member at Monday’s event questioned whether all transportation investments might inevitably improve access for wealthy areas most, since richer areas are most likely to be already linked into the system. This observation flies in the face of the language of “transformation” and “inclusion” used to promote the Olympic legacy projects, and underscores that simply building something is no guarantee of positive impacts for those who need it most.

Contributing factors to inequalities in mobility

The panelists all stressed that a number of simultaneous issues played a role growing or maintaining inequalities in pre-Olympic Rio. First, when we ask the question of who benefited from the transport investments, Rafael Pereira pointed out, the answer is clearly not the families who were removed explicitly to make way for that infrastructure between 2009 and 2015. Many of those families were resettled in Minha Casa Minha Vida (MCMV) public housing units, 90% of which are in the part of the extreme West Zone designated as Planning Area 5, where Linke noted that only 30% of MCMV complexes are located within one kilometer of a station or bus stop.

The failure to better integrate housing and transportation policy in the mega-event development years was a lost opportunity, she reflected: “In this same period, we have a housing policy that puts a development like the MCMV Jesuítas [housing complex], for example, six kilometers from Santa Cruz, the nearest consolidated area. At the point that ITDP was conducting research [on this], the housing development was 1.5 kilometers from the nearest bus stop. Forget a train station—a bus stop!” She added that this isolation risked setting up the housing complex to be “a ghetto,” exacerbating social inequalities. 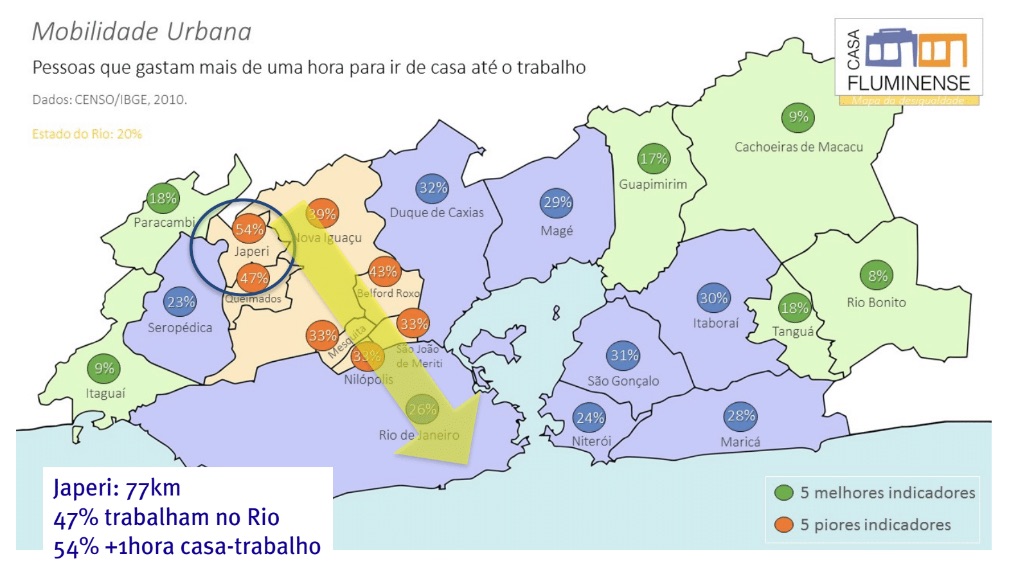 Beyond evictions, Linke stressed that recent transportation projects have failed to address other current housing and employment trends: “We continue pushing the city into the West Zone—pushing housing to the West Zone, not necessarily new opportunities, not necessarily jobs.” She pointed out that Planning Area 5, the part of the municipality that is furthest from downtown Rio, accounts for 27% of housing but only 8% of jobs. In contrast, Planning Area 1, which encompasses downtown Rio and the Port Zone, accounts for 4% of housing but 38% of jobs. She described this scenario as “a problem that starts in the area of housing but actually ends up becoming a problem of mobility.” Instead of developing costly transport routes that require workers to spend hours commuting, Linke advocated for developing opportunities in concentrated West Zone areas or other municipalities in the metropolitan region.

Then, there is the issue of affordability. Pereira presented data showing that daily commutes requiring just a single bus or BRT ride takes up 43% of the lowest decile of incomes. That percentage increases if a commute involves the train or the subway, because those ticket prices are not integrated. As transportation costs increased over recent years—beyond the rate of inflation, as Juciano Rodrigues noted—ridership on bus and BRT lines dropped, digging the remaining bus companies into an ever-deeper financial hole. Increasing unaffordability and decreasing ridership suggests that the low-income population’s access to jobs and schools may have diminished even more in the 2014-2017 period than the amount captured in Pereira’s study.

Rodrigues made it clear that the other World Cup host cities across Brazil had made similarly ambitious plans with some disastrous results. He outlined how only a fraction of the R$8 billion set aside for transportation developments across 11 host cities was actually spent, even while several of the implemented projects cost more than the budgeted amount due to corruption and delays. The researcher concluded that in contrast to the lofty claims made in the mega-event legacy discourse, the new transportation infrastructure “reproduced a model of urban development that was segregated, fragmented, and exclusionary.”

In response to an audience member who suggested the research findings about continued inequalities were nothing new, Pereira observed that “it’s a paradox” because “we’ve been saying the same things for 30 or 40 years” but the government “continues to implement investments that reinforce inequalities.” Instead, government officials—whether municipal, state, or federal—would do well to incorporate the type of methodology modeled by Pereira’s research, sponsoring independent research for impact projections and assessments, and sharing these findings publicly to increase accountability for projects that claim to transform society.