For the original article in Portuguese by Fábio Silva published by data_labe click here.

How do you refer to the place where you live? How do you perceive your space and how do you interact with it? Do you frequently speak about your city on the Internet? Does the way you perceive your territory have something to do with how mainstream newspapers refer to it? Based on these questions, I decided to investigate the predominant narratives about the Baixada Fluminense on Twitter and in two high-readership newspapers—O Dia and Extra—between June 1 and 15, 2016. The result of this investigation shows that the theme of violence still draws the majority of news reports and sparks opinion statements on social media regarding the Baixada Fluminense. However, themes of politics and culture are much more prominent across opinion statements, without receiving the same level of coverage in the major newspapers.

During the first half of June 2016 I collected more than 700 tweets related to the Baixada Fluminense, dividing them into either “News” or “Opinion” and classifying them according to the topics they focused on.

The graph above refers only to the items shared about the Baixada Fluminense that were categorized as News (580 items). Once again, violence and content related to police stand out as the most common themes in the News (red, 62%), followed by job offers in the region (orange). Themes related to culture and entertainment represent only 9% of items (blue). Among the news topics that were most shared, the murder of a candidate for councilor stood out. 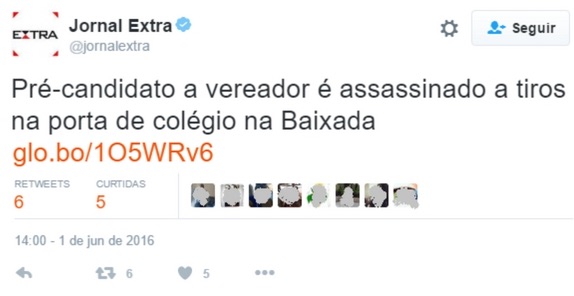 “Pre-candidate for city councilor is assassinated by gunshots at high school entrance in the Baixada.”

However, in the Opinion category the most common themes are different. Of 187 tweets, about 35% referred to political themes (yellow, below) and 20% to culture and entertainment (blue) in the Baixada Fluminense. The comments were diverse but largely featured critiques or demands for more effective public government intervention in the region. Two protests that occurred in the Baixada Fluminense during the data collection period drew significant attention: one in Nova Iguaçu protesting against rape culture—which didn’t receive a single mention in the major newspapers—and the other in São João de Meriti in defense of peace.

The thematic discrepancy between the categories of News and Opinion published on Twitter is clear. How can we explain why the most shared news on the network is about violence and police cases, but the most debated themes during this period are about culture and politics? This relationship is linked, in part, to the production of news about the territory. With this in mind, I studied online news about the Baixada Fluminense from the Extra and O Dia newspapers during the same period of collecting tweets. These two publications were chosen because both had a section dedicated specifically to the region. By scraping data from Google’s search engine, 43 news articles in the newspaper Extra and 50 in O Dia were collected.

What is the news about the Baixada Fluminense?

About 62% of the news items from Extra about the Baixada Fluminense related to police issues. Of the 48 articles in O Dia, 56% of the stories were about violence, while themes like politics and culture together represented only 18% of the total. The news reports in O Dia maintained a regular frequency, with some content related to the Baixada Fluminense and political themes in the region published each day.

How many articles about the Baixada per day?

To better illustrate the data, I opted to capture the most frequently used words in each of the categories, News and Opinion, so we can have a more accurate idea of the principal themes discussed on the social network.

Most used words on Twitter in the News category:

Most used words on Twitter in the Opinion category:

In the News, words like “theft” and “victims” stand out. Of interest across the Opinion category is the frequency of comparisons between the Baixada Fluminense and Rio de Janeiro. Moreover, there are diverse adjectives applied to the politicians of the region and calls for improvements to infrastructure and more investment in the area of culture and entertainment.

Data are produced daily across social networks by each and every user, and knowing how to collect these, we can extract a range of information regarding the habits, behaviors, and opinions of the network’s participants. Therefore, before being able to measure the perceptions expressed online about the Baixada Fluminense, I needed to create some way to collect these data. The method I used was data scraping via IFTTT, an open service that creates automated tasks for different sites—in this case, capturing mentions of the tag “Baixada Fluminense” across Twitter and Google Search during the determined period.

It is worth mentioning that the IFTTT does not capture all of the tweets posted on the social network with the chosen tag, but rather captures some, collecting up to 15 random tweets per check. Thus the work that is presented here reflects a random sample.

Between June 1 and 15, 2016, 767 tweets related to the Baixada Fluminense were collected, which I then divided between the categories of Opinion and News published or republished on Twitter. In the News category were the tweets that included links to take readers to an online news portal; and in the Opinion category were tweets that did not have specific sources but contained written content related to the region.

From the data collected, I created a classification of the commentary by themes, coding them by the topics that most characterized the tweet with the intention of grouping the messages and being able to measure the topics most covered. The themes are: Police and Violence; Culture and Entertainment; Employment; Politics; Weather; Sports; Urban Mobility; Infrastructure and Sanitation; Education; Health; Religion; and Economy. 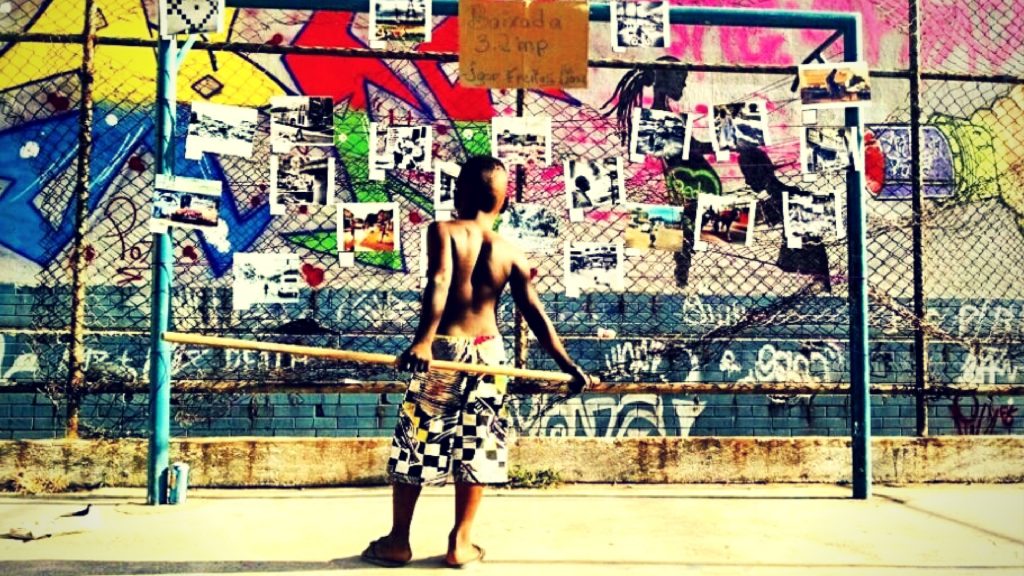 This article was written by Fábio Silva, and published on January 16, 2018.
Translation provided by Sharonya Vadakattu. This article originally appeared on data_labe. in Perceptions, Research & Analysis, Translated by RioOnWatch