The Emergency Plan of Social Actions for Rio de Janeiro has a total investment of R$ 157 million. Image: Marcos Corrêa/PR

For the original article in Portuguese by Michel Silva published by Favela em Pauta click here.

Brazil’s Defence Minister, Raul Jungmann, announced in July 2017 that favelas in Rio de Janeiro would receive a series of socio-educational projects to fight organized crime in the city. Six months later, with data obtained through the Access to Information Law, Favela em Pauta looks at how the package of proposals will be delivered to the state through the National Security Plan.

Rio de Janeiro is the first state to receive the National Security Plan’s integrated projects to combat crime. According to the Ministry of Social Development (MDS), an Emergency Program was created with the objective to recuperate and strengthen the State and the City’s public policies and social work in certain priority vulnerable favelas. From these discussions, the Emergency Program for Social Actions for the State of Rio de Janeiro and its Municipalities emerged. According to the MDS, the program aims to “restore broad access to public social goods and services to the residents of the affected regions, in order to preserve citizenship and social, family, and community ties.”

The program will serve to expand social policies around basic and special social protection, attention to healthcare, and opportunities for educational activities, training and professional qualifications, and cultural, artistic, sporting, and leisure activities. It also calls for work around the protection of human rights and the guarantee of women’s rights.

A total of R$157 million (around US$50 million) was allocated to the Emergency Program’s projects from the 2017 federal budget. The objective is to benefit about 50,000 children and young people between 6 and 17 years old from different favelas in the state. These resources came about by releasing budgetary credit of each department involved in the Executive Committee. The budget will be applied according to the Work Plans, in order to guarantee the necessary means for the socio-educational projects. 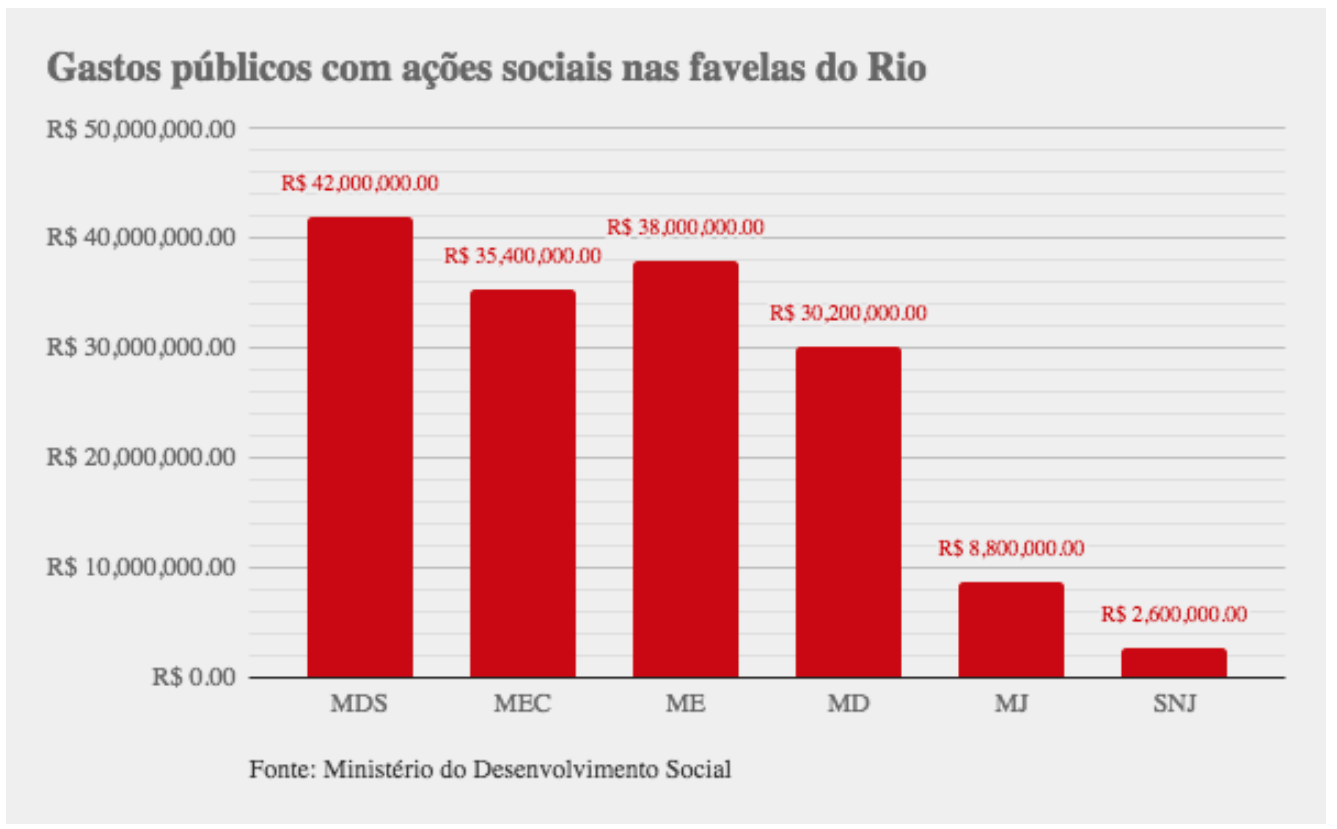 Each ministry will have autonomy in its transfers to the State and Municipalities. For example, the Ministry of Social Development will transfer R$42 million through the National Social Work Fund (FNAS).

The Ministry of Defense (MD) will apply a budget of R$30.2 million through Army, Navy and Air Force military organizations. The number of beneficiaries of the “Forces in Sports” program will be increased to reach 12 to 18-year-olds through after-school programs. The aim is to reduce urban violence through developing educational sports activities and providing meals in military organizations.

The Ministry of Sport will sponsor projects through the Decentralized Implementation Term for the Fluminense Federal University (UFF) and will also make transfers to the municipality through agreements for the expansion of the “Sport and Citizenship for All” and “Combat Sports and Martial Arts Practice” pilot projects, as well as the “Fight for Citizenship” project.

Responsible for the third biggest budget in the Emergency Program, the Ministry of Education will transfer nearly R$35.4 million through the Direct Cash at Schools Program and by offering Bolsa-Formação (Training Scholarships) within the framework of PRONATEC. In partnership with the United Nations Children’s Fund (UNICEF), R$2.5 million will be spent to identify kids who should be in Rio de Janeiro’s municipal or state school system but who are currently out of school, so that they can be registered and return to classes.

The National Youth Secretariat and the Ministry of Justice and Public Security did not outline how they would contribute to the State and municipalities’ budgets.

During the ceremony to launch the Emergency Program in the Admiral Adalberto Nunes Center for Physical Education (CEFAN) at the end of last year, Brazilian President Michel Temer gave a speech highlighting his political alliance with Rio’s leaders. “I also want, although I have a speech written here, [governor] Pezão and all of the speakers [to know], I am inspired by the words that have been spoken here. And in their words, I am always trying to find the keyword for this ceremony in which I’m taking part. And I think that that keyword here is integration,” Temer said. 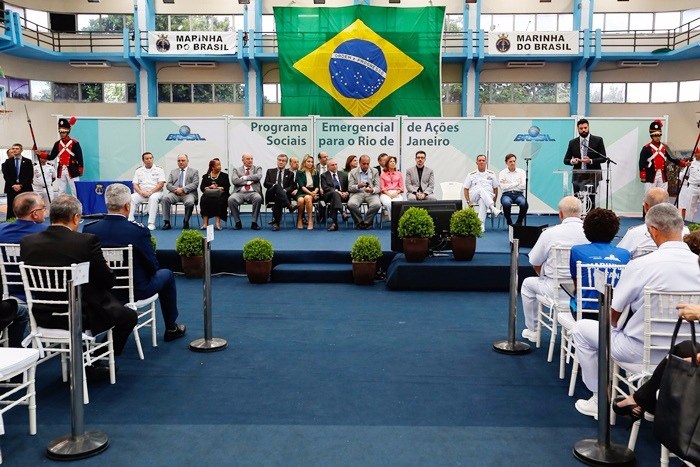 The Emergency Program for Social Actions for Rio de Janeiro has a total investment of R$157 million. Image: Marcos Corrêa/PR

In an interview with the CNT TV channel, the president of the Federation of Favelas of the State of Rio de Janeiro (FAFERJ), Rossino de Castro, concludes that the program is yet another political project aimed at the 2018 elections. “Always at the time of elections, they come up with this weak program that does not solve [the issues], it’s a palliative for the communities. And we don’t want a palliative [remedy]. We want something concrete, we want social [development] because social [development] is work that really helps the community. It helps combat violence, helps employ the parents of families that are inside the communities doing nothing. But unfortunately without this social [development], the violence grows day after day,” laments Castro.

The priority of the Emergency Program, based on statistics from the state of Rio de Janeiro’s Institute for Public Security, are the favelas based in the North and West Zones of the city of Rio de Janeiro because they have the highest rates of mortality linked to violent incidents. Based on studies conducted by teams from the Unified Social Work System (SUAS), the favelas that should receive projects and investments are: Complexo do Lins, Complexo do Alemão, Complexo da Penha, Complexo da Maré, City of God, Complexo do Chapadão, Complexo da Pedreira, and Vila Kennedy. These territories are served by eight Social Work Reference Centers (CRAS) and six Reference Centers Specialized in Social Work (CREAS). 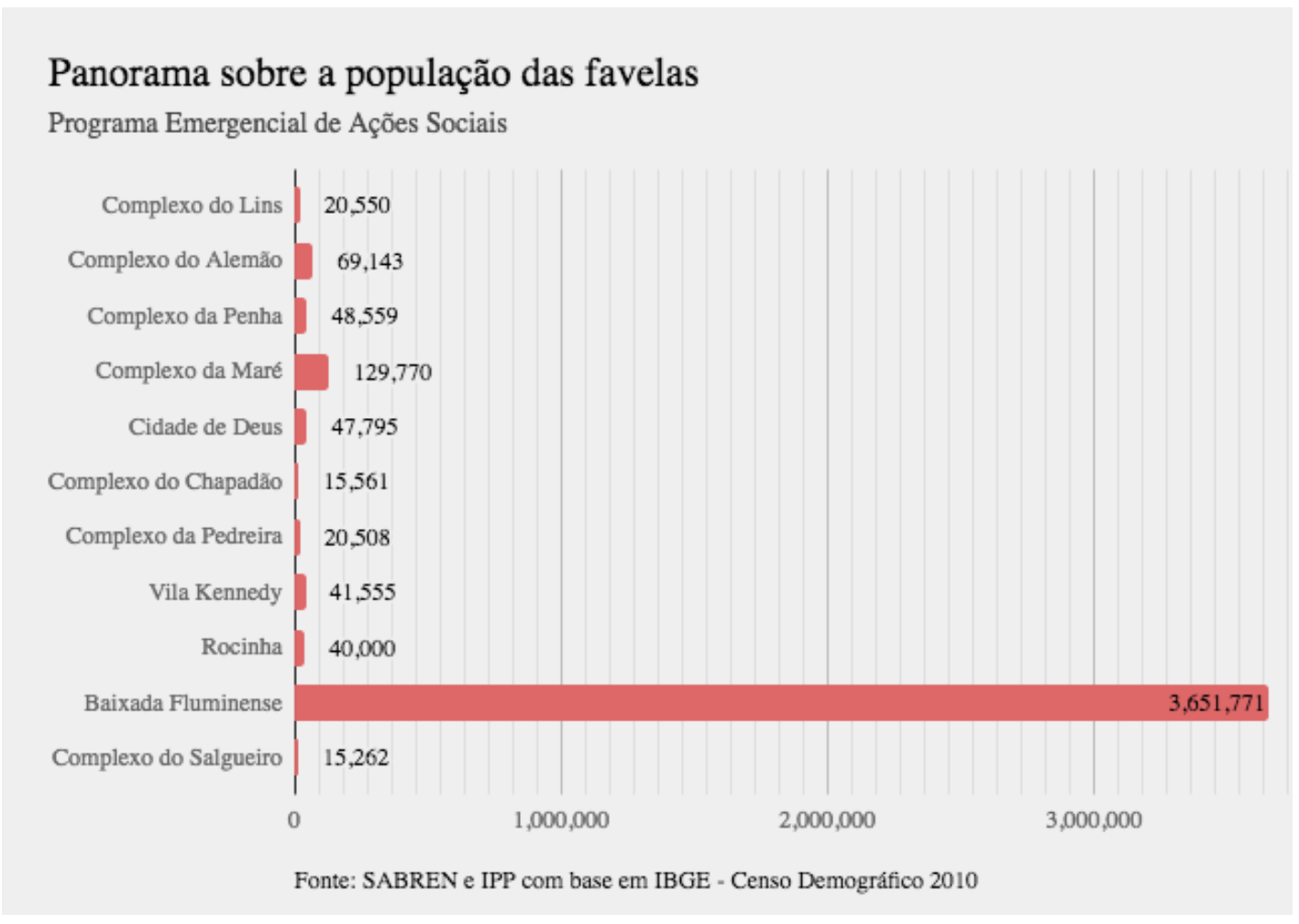 Panorama of populations in favelas designated for the Emergency Program for Social Actions. Source: SABREN and IPP with data from IGBE / 2010 Census.

The Ministry of Social Development also included the favela Rocinha in Rio’s South Zone, Complexo do Salgueiro in São Gonçalo, and the Baixada Fluminense, although it did not specify which regions of the Baixada Fluminense will be targeted, bearing in mind the geographic size of the municipalities.

For Instituto Raízes em Movimento sociologist, Alan Brum Pinheiro, the Emergency Program appears to reinforce public projects that already exist precariously, focusing on certain favela spaces in Rio de Janeiro. According to him, without efficient municipal and state public management and without a strategic vision to think about a minimum of sustainability, the investment of R$157 million could turn into a wasted effort, equating it to trying to “dry ice.” “Many groups and institutions, formal and informal, are building local alternatives and some with a certain level of success. Government investments should build on the existing initiatives, scaling them up through public policies. Who is going to continue in these communities after the period of this plan? This is an electoral year and the investments are needed, so how best to do them? Only by involving a diverse range of projects and a monitoring system under social control would we be able to achieve any success from this proposal,” Brum Pinheiro argues.

Brum also criticized the low investment in the National Youth Secretariat—around R$2.6 million. “It is foolish that the smallest investment in this proposal should be in the National Youth Secretariat and the ‘Juventude Viva’ (Youth Live) project, which has a focus on black youth. This does not help to consolidate the public policies aimed specifically at this group,” he laments.

The Rio city government’s Casa Civil had not responded to our inquiries at the time of publication.

This article was written by Michel Silva, and published on January 29, 2018.
Translation provided by Jiselle Steele. This article originally appeared on Favela em Pauta. in *Highlight, by Community Contributors, Policies, Translated by RioOnWatch