This article is part of a series by authors from Rio’s favelas reflecting on City Councilor Marielle Franco’s legacy, to ensure her voice is multiplied and to advance the causes she championed.

From an early age I learned about sexual harassment, police stops, racism, segregation, and genocide. These lessons did not appear with these academic labels. For the children of the favela, these concepts are present in the guidelines of the “(covert) manual for marginalized people’s survival,” taught at an early age in the houses of peripheral communities. These tactical teachings are nothing more than a set of precautions involving what you wear, or the danger of running at night, or getting used to seeing ladies holding their bags tight when a young black person walks past them.

At the age of 13 I had my first and strongest lesson on genocide: the Vigário Geral massacre. It was a terrifying watershed moment in my life. You can die in many ways when you have black skin, even at home watching TV. I remember asking my mother to put bars in the window and I would get frightened when there was a noise at the door. At the age of 13 I learned what it was to be afraid, and since then that feeling has altered and guided many of my choices. Any outcry of ours was seen as a whimpering of victimhood, but the numbers are tragically accurate: we have been statistics of death since the beginning of the African diaspora.

“Marielle is present, now and forever!” protest in Maré on March 18, 2018. For a woman and favela resident, existence is resistance. Photo by Bárbara Diás / Fotoguerillha

For many we are nothing more than numbers and a color. I felt like a survivor and I was proud of it. My militancy was never on stage nor for big audiences. Instead, my resistance is simply to exist, to have an opinion in the face of subtle (or not) racist attacks from this society. Black bodies are the target! Even in silence, even in childhood, even in youth, even being female. Black bodies have no choice about exercising their sexuality (their sexuality is either denied or violated). We discredit the state force and cling to the ancestral force, which is also denied and demonized, one more right taken away from us: the right to worship. My militancy came along with the fear of being seen. I continued on with a more playful fight, in small circles or via emotional catharsis in the texts I wrote.

Behold, less than a month ago, in one of those moments that life offers up, I found the Carla that had existed before Vigário Geral. A youth who would have liked to have been a journalist, investigating and talking about slavery. In this moment, I found myself. Now a little older, a little more hardened. At the age of 38 I went to a feminist protest for the first time. It was March 8: International Women’s Day, a protest where Marielle Franco was present, but as chance had it, we didn’t run into each other. So much rain, so many struggles, so many voices… I couldn’t see it all. That crowd shouted out for women to stop dying: whether because of color, sexuality, or religion.

The shouts, on one of Rio’s main avenues, echoed within me and seemed to echo across the rest of the world. To encounter these struggles and see into the eyes of the women who asked for an end, not only to the death of the physical female body, but also for an end to the deaths of women’s ideas and ideals. What we want goes beyond shallow discourses of sharing bills, tasks, or knowing with whom we share a bed. We want to be in the places we want to be in, to exist and to be in spaces without causing a shock because we are the only female voices in sectors that are mostly male. Equity, my dears, is what we want.

Surrounded by so many voices I discovered that “I walk fine alone, but with others I walk better.” I wanted to eternalize that day in words, I wanted to live more of it in action, but I stayed silent for a week, ruminating. And then the silence was broken with nine shots… I was introduced (in the worst way possible) to a living force of femininity, from the periphery. Someone like me, my age, from the favela, a beneficiary of social college preparatory courses, an academic, a lesbian, and a black woman, who was fighting on the other side of the city for me, for so many who are and who will come. In an instinctive (and posthumous) search I searched her presence on social media networks (about that hitherto unknown woman) and I saw pain and success: she existed, she resisted, and she ‘got there.’ ‘There’ where fear becomes a verb, turns into action, turns into being seen. 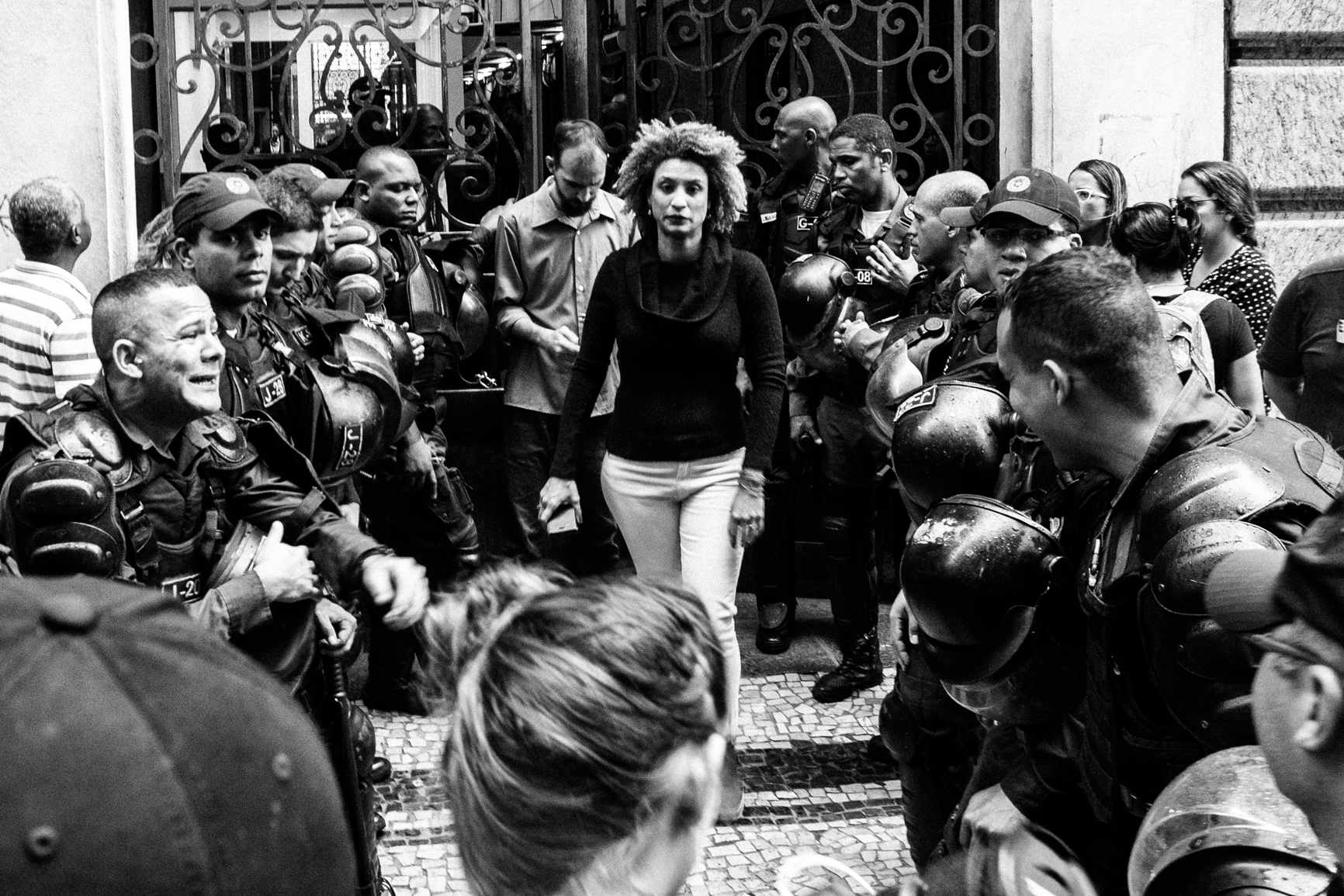 Marielle Franco leaving the Rio de Janeiro City Council on October 26, 2017. “She existed, she resisted, and she ‘got there’. ‘There’ where fear becomes a verb, turns into action, turns into being seen.” Photo by Bárbara Dias / Fotoguerrilha

Marielle, before March 14, was not a name I knew, but somehow she knew who I was, who my friends were, who my nephews and nieces were, who my daughter would be. She was fighting for me, for us, on the frontline. With her curly hair and colorful turbans, her sharp gaze and direct words, she would declare, “I will not shut up! We will not shut up!” Today her voice has been multiplied. We cry, we lament, and we feel rejected. However, a cry breaks out: STOP KILLING US! STOP SILENCING OUR VOICES! We will be many and in many forms. This is the answer. Finally, I say to those who are uncomfortable with our emotion: enjoy your right to stay silent in your ignorance and lack of understanding about the meaning of our pain.

Carla Souza is a teacher by training and loves her job as a childhood education teacher. She is a resident of Rocinha, and understands her existence as a black woman and favela resident as a focus of struggle and resistance in the world.

This article was written by Carla Souza, and published on April 6, 2018.
Translation provided by Cheyne Bull. in #MarielleLegacy, *Highlight, by Community Contributors, Opinion