For the original article in Portuguese by Paula Adamo Idoeta published in BBC Brasil click here. 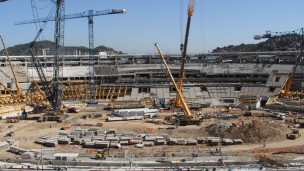 For planners, Olympic construction should fit into long-term city plan

Rio’s Mayor, Eduardo Paes, has already said that the 2016 Olympics are a “wonderful excuse” to make necessary urban changes to the city. But, according to two foreign specialists, the mega-events are excessively regulating the urban changes in Rio in a distorted way: instead of having the Olympics and the World Cup help the city create a long term urban plan of, for example, 50 years, the city is altering itself to accommodate these sporting events.

In her book Planning Olympic Legacies, which came out this year, German architect Eva Kassens-Noor analyses the urban legacies of past Olympic host cities and states that Rio “is being driven by the demand of mega-events,” from the Eco-92 conference, to the Pan-American Games in 2007, to Rio+20, to the World Cup and Rio-2016, rather than city planning focused on its residents.

For American geographer Christopher Thomas Gaffney, visiting graduate professor of the University of Architecture and Urbanism at the Fluminense Federal University, researcher, and one of the consultants for Noor’s book, the danger is that, “The ‘project’ of the city will always be to sell Rio to outside interests.”

Gaffney, who has lived in Rio for three years, is unsure what will dictate the city’s planning after 2016. “What could be bigger than the Olympics? These changes should be part of the city’s long term planning. The city is being built for other people to use, and this model has to change,” he told BBC Brazil by telephone.

Noor, Assistant Professor of Urban Planning and Transport at Michigan State University, cautions that her chapter dedicated to Rio is still in progress for future editions, however tells reporters that the ideal is to, “Plan where I want my city to be in the next few decades, and from there see how the mega-events can contribute to that vision,” instead of catering to the demands of these mega-events.

On a positive note, she agrees, “The events put Rio on the map, create an economic boom, and drive urban development and the union of political parties, due to the urgency involved in completing everything on time. By hosting these mega-events, Rio has become a reference city in South America.” 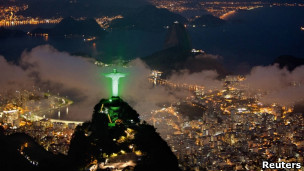 “On the negative side, popular political participation becomes relegated due to lack of time. Few people are involved in the planning process.” Furthermore, some areas of the city benefit at the expense of other areas.

As a result of this, in Gaffney’s opinion, the project becomes a “segregator,” by benefiting areas like Barra–where the Village and Olympic Park are located–instead of areas like the North Zone, West Zone, and Baixada Fluminense. In addition, the pockets of every resident will be affected by the high rental prices in the city.

For Rio’s City Hall, the principal legacy will be the transportation system, with investments mainly directed toward the four BRT (Bus Rapid Transit) lines, which will total 150km and link Barra to the Tom Jobim Airport. Authorities claim that the construction will impact the lives of 2 million Cariocas.

Noor believes that the choice to construct the BRT lines makes sense considering the pressure the city is under to have them completed in time (the BRT lines are faster to build than metro lines). Furthermore, Brazil has had experience in building this model before, which has the capacity to carry a large number of passengers.

Gaffney is extremely critical and believes that City Hall buckled under pressure of bus company lobbyists and chose to privilege a model worse than that of the metro model. The BRT lines pollute the environment [the roads are 10 lanes in some places, with only 2 dedicated to buses] and will not convince, for example, residents from Barra da Tijuca to take public transportation instead of their cars.

Furthermore, he said, “The city has failed to create a transportation system that integrates different transport modes such as train, bicycle paths, and metro. All of the changes being done barely link the existing systems to anything. To not expand the metro further is a lost opportunity.”

BARCELONA, THE ENVIRONMENT, AND WHITE ELEPHANTS 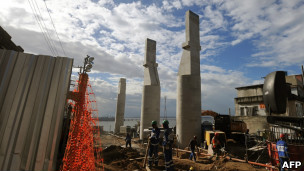 Noor, contrary to Gaffney, is optimistic about some of Rio’s choices. She points out that areas like Deodoro will become more accessible and the advances made in infrastructure will benefit the city.

Nonetheless, she thinks it is dangerous for Rio to aspire to be like Barcelona, despite the urban success of the Spanish city after the 1992 Olympic Games.

“In Barcelona there were also four different areas connected by transportation (in Rio’s case they are Barra, Deodoro, Maracanã and Copacabana). But the two cities are very different in size and geographically, and Barcelona did not have favelas. I don’t know how Rio will ensure to protect the environment and guarantee that the favelas will benefit from the BRT,” stated the architect.

According to the specialists, various road works in Rio pass through fragile marshland ecosystems and through densely populated urban areas, which will have to cohabit with the bus corridors.

In question is Rio’s Velódromo–built for the Pan American Games in 2007, it cannot be adapted for the Olympics and has an uncertain destiny–Noor says that all Olympic cities have to deal with these “white elephants.”

The solution to minimize the problem, she voices, is by constructing temporary arenas that can be dismantled after the Games and allow the spaces to be constructed in ways that will benefit local residents.

“In many cases, this space could become a park, like Sydney did with Homebush Bay, the area that held their Olympic Park in 2000. In this case, the Olympics created motivation for the development of the city.”

But, Noor highlights, “It is necessary to set apart funds for these projects in advance. For instance, Athens planned to transform the Olympic complex into a park but Greece entered into an economic crisis and the project was unable to be completed. The lesson is that if you begin to think about the urban legacy only after the Olympics, you will be committing a grave error.”

This article was written by Paula Adamo Idoeta, and published on September 19, 2012.
Translation provided by Emma Platais. This article originally appeared on BBC Brasil. in #Rio2016, Policies