One week ago, on May 26, approximately 2,000 people participated in the “Stop Killing Us!” protest in front of Post 8 at Ipanema’s beachfront, in Rio de Janeiro’s South Zone. Community-based and civil society organizations, leaders of social movements, favela residents, political representatives and citizens of Rio, and an inadmissible number of mothers and family members of victims of extrajudicial killings committed by police, gathered at the beachfront with the aim of demanding the right to live from the government and taking a stand against the massacre that is underway in Rio today. According to the organizers, they came to the beachfront to bring awareness to residents of formal neighborhoods about the extermination of innocent people currently taking place in the city’s favelas and peripheries and to work together to change this scenario.

“Stop Killing Us” emerged in late April with residents of the Vidigal favela who refused to accept the death by police of trash collector William de Mendonça Santos—who, just weeks prior, had come to the aid of victims of landslides in the community. The group quickly grew due to a generalized nonconformity on the part of Rio’s civil society with current levels of police violence, immediately attracting 79 community organizations from across the Rio de Janeiro Metropolitan Region that worked together to organize the demonstration. Their main demands included doing away with deadly public security policies, combating structural racism and impunity, and on a very basic level, putting an end to police operations during school hours.

Struggle for the Right to Live 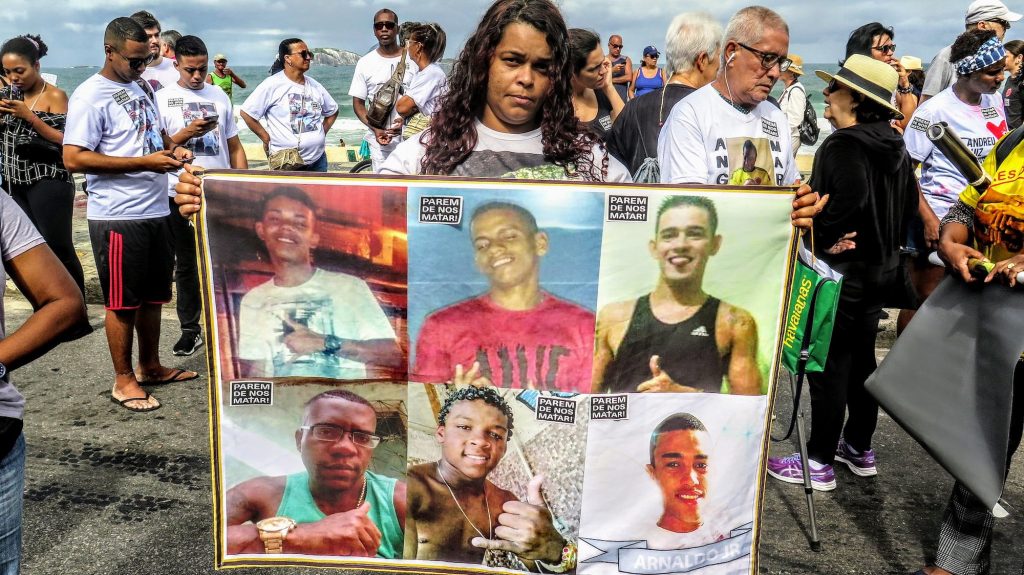 According to the Public Security Institute (ISP)—and as stated in the protest’s manifesto—”every 23 minutes a black youth is killed in Brazil. In the first three months of 2019, the number of deaths resulting from police action was the highest recorded in the past twenty years, an average of seven deaths per day.” In this context, many voices came together during the demonstration to fight against this barbaric scenario, with two female favela residents as the event’s presenters: Bárbara Nascimento from Vidigal and Rute Sales from Manguinhos. Signs, pamphlets, and verbal denunciations of the violence experienced by residents of Rio’s favelas rang out and echoed along Ipanema’s beachfront.

Present at the demonstration, activist André Constantine from the collective Favela Não Se Cala (“The Favela Will Not Be Silenced”) stated: “We are here to say yes to love. We are here to join hands. Everything is possible—yes, we can! So, this is a demonstration for the right to live. It’s a demonstration to put an end to the massacres carried out by the government in favela communities, especially with this war on drugs policy against the backdrop of the genocide of black youth.”

The demonstration featured several highly dynamic speeches, interventions, and discussions. Without a doubt, one of the most powerful moments was when the mothers and spouses of victims of state violence bluntly recounted the atrocities committed against their family members. Constantine introduced them: “Let’s hear from mothers who have lost their children to state violence. These mothers suffer two deaths: first, they lose their children. Then they have to prove that their children were not criminals… It’s a lot of pain for these mothers [to handle].” 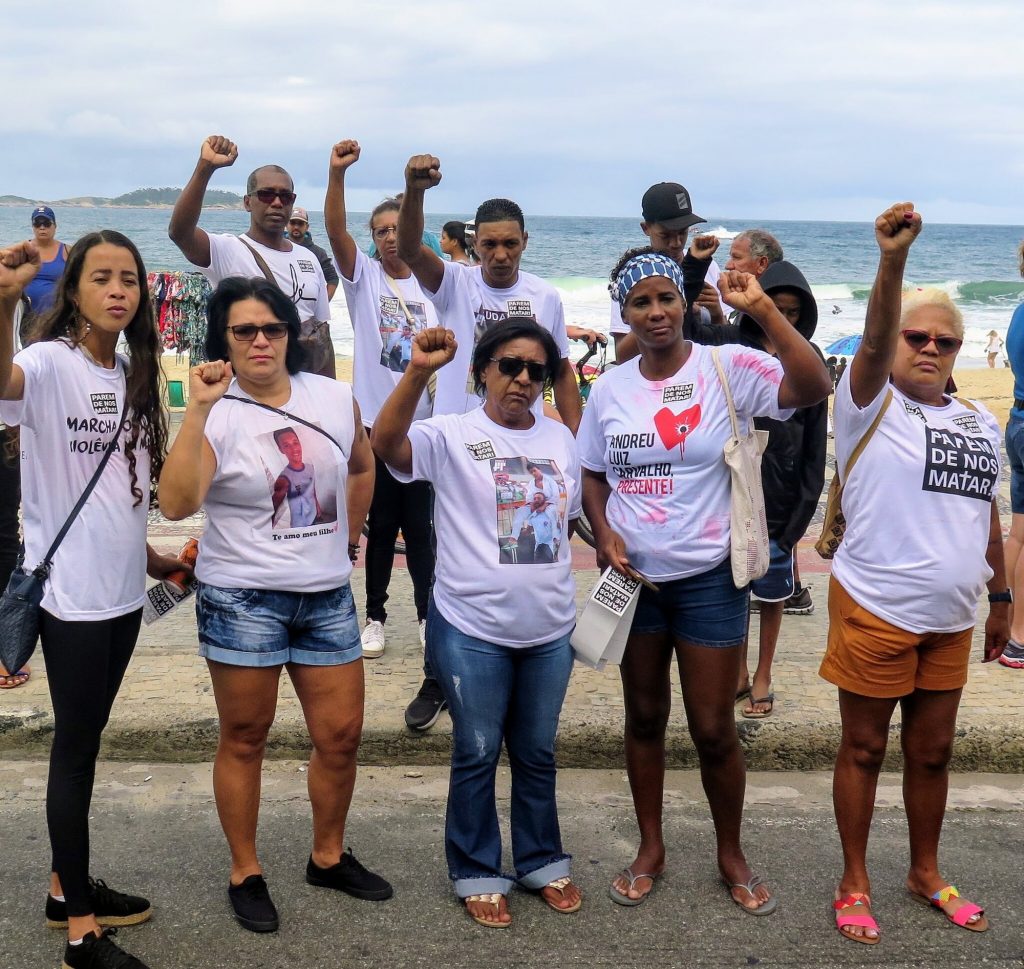 “Our children are being buried in exchange for what? For public security, which does not exist! We have come here today to demand our rights. We want justice. We want respect. All that we want is to live in peace.” – Bruna Silva, mother of Marcos Vinicius da Silva, killed on the way to school in Maré 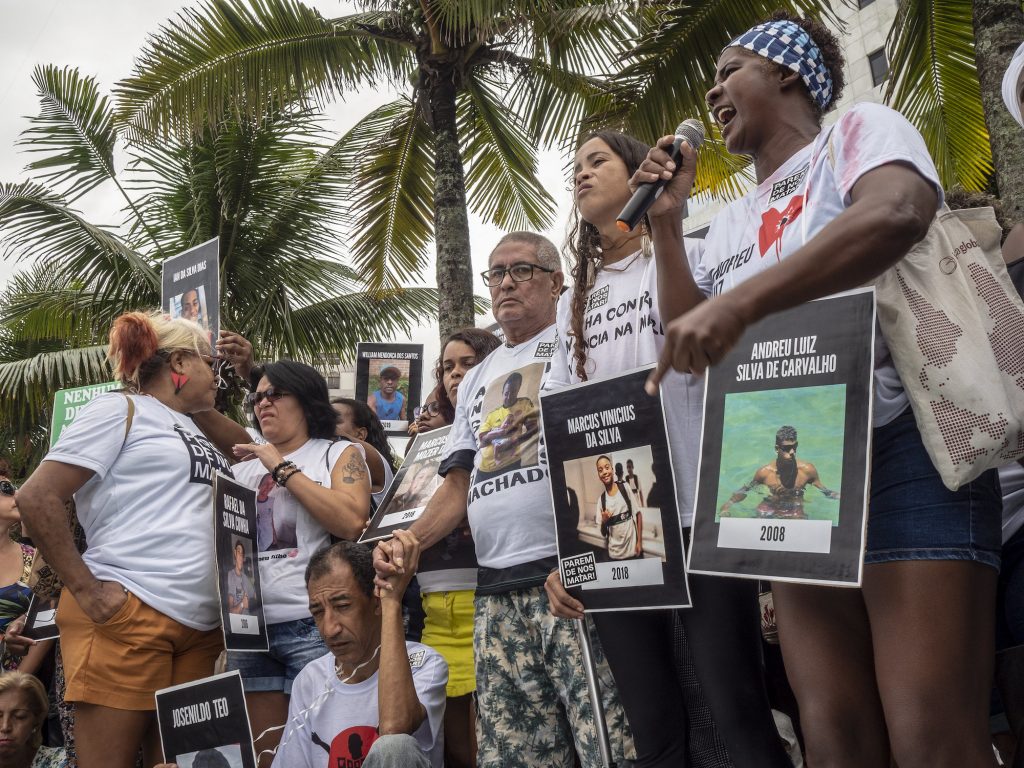 “When they killed Andreu, I went to the gate of DEGASE [juvenile detention facility] and said: ‘You killed the wrong black woman’s son. I am going to fight until the end in order to get justice…’ The dead have a voice and I am the voice of Andreu; they only killed Andreu’s body.” – Deise Silva de Carvalho, the mother of Andreu Luiz Silva de Carvalho, tortured to death by DEGASE workers

“Living in a favela means not having rights… Our children have a voice because we are their voices—we are the mothers of those who suffer racism. I didn’t give birth to my son so that the government could shoot him in the head. They can’t do this. Stop killing us!” – Mônica Cunha, mother of Rafael da Silva Cunha, a youth who had served time in a DEGASE youth detention facility and was killed by a Civil Police officer 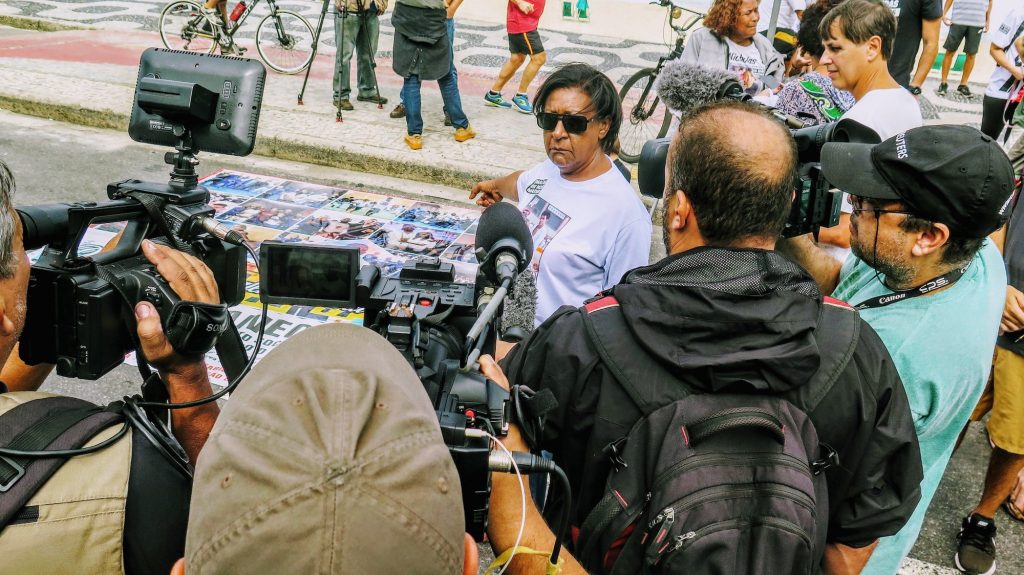 Sandra Mara points to a banner with photos of her son, Jean Rodrigo da Silva, participating in jiu-jitsu competitions. Silva was killed by police on May 14. Photo: Daiana Contini

“My son was shot in the head when there was no exchange of gunfire. The police shot my son in the head at the doorstep of the project where he worked to take kids off the street and engage them through sport… My father, who attended the police academy, said that self-defense is when a shot is fired below the waist; a shot to the head is a shot intended to kill.” – Sandra Mara, mother of jiu-jitsu instructor Jean Rodrigo da Silva, killed by police in Complexo do Alemão less than two weeks prior

Culture and Art as Resistance 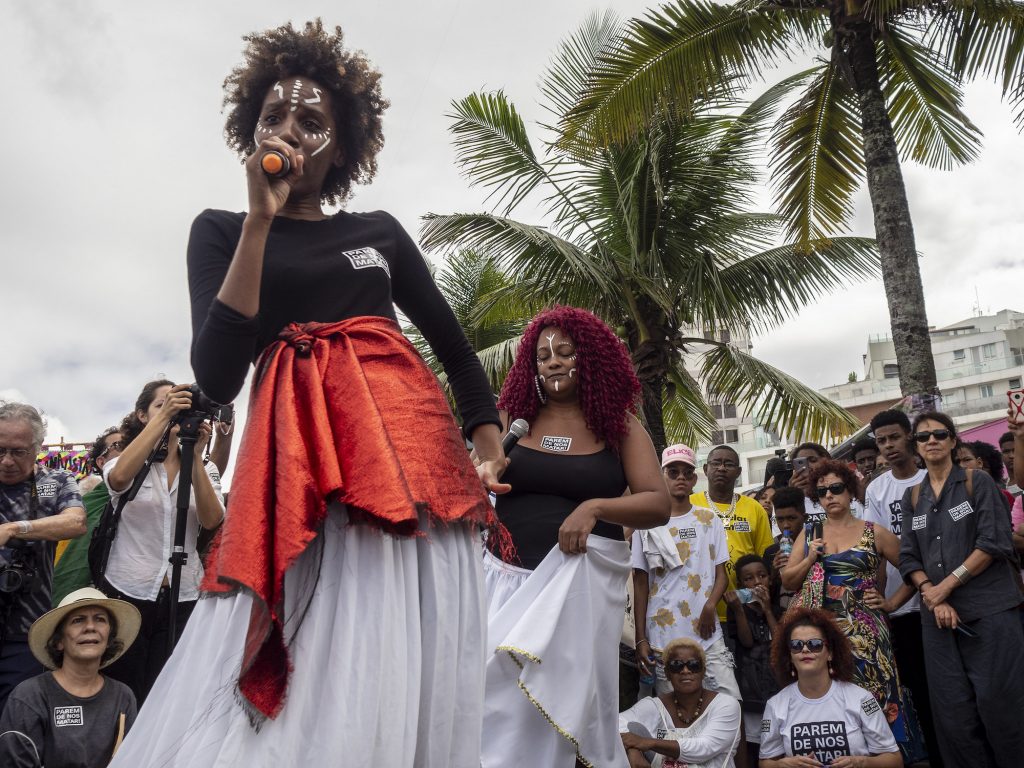 With dancers, poets, and artists, Afoxé Filhas de Gandhy carried out performances in honor of ancestral black culture, which is often discriminated against, forgotten, or rendered invisible in everyday life. The artists highlighted the resistance of their ancestors, historical examples of resistance, and their tenacity from the process of enslavement in Africa to their arrival in the Americas, and thereafter, the constant adversity experienced through history to present day. Famous icons were also celebrated, such as Mariana Crioula—who, in 1838, alongside Manoel Congo, led the largest slave revolt in the region of Vale de Paraíba. 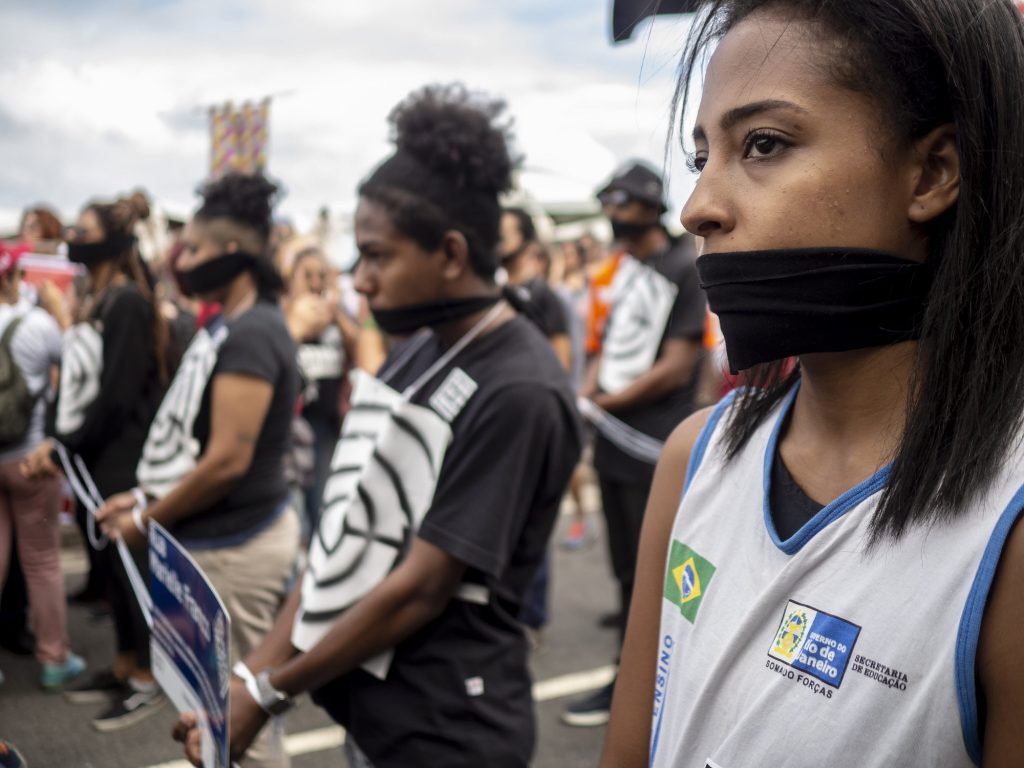 The group Levante Popular da Juventude (“Youth Rising”) carried out a performance that brought into focus the targeting of favela residents by police. With their mouths tied shut, the group’s presentation denounced the silencing of youth from favelas and peripheries. The strong symbolism of the performance and the group’s poignant criticisms of government clearly impacted the audience. 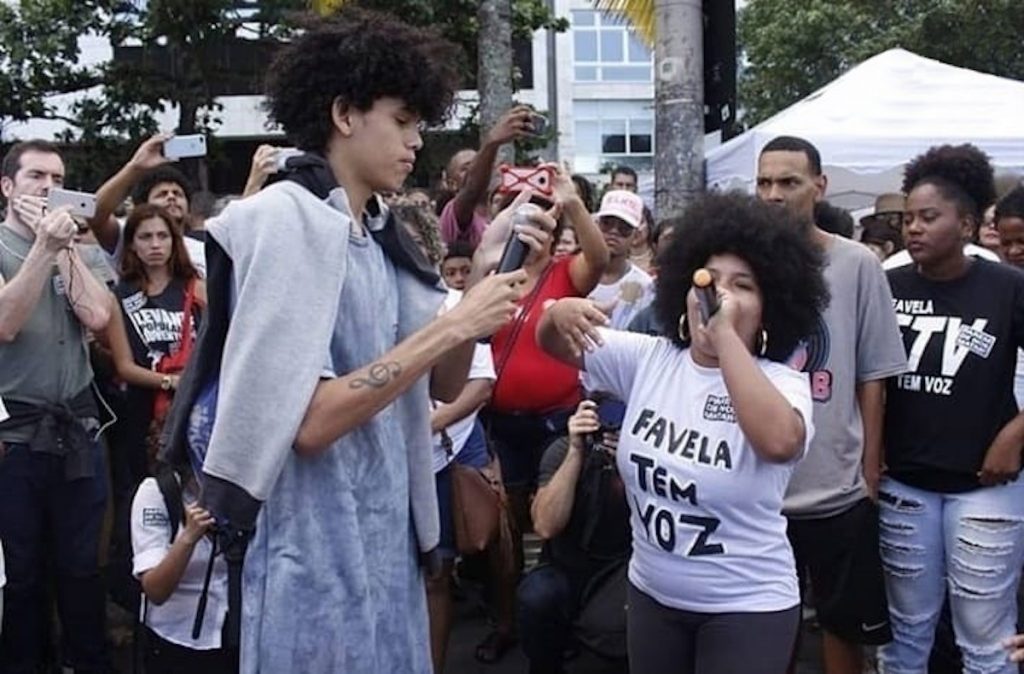 The collective Favela Tem Voz (“Favela Has a Voice”) questioned: “Brazil—the land of carnival, of juggling at stoplights—is a playland! Rio de Janeiro, touristic city, with its beaches, samba, and warm people—but what is known about the truth behind the marvelous city?” 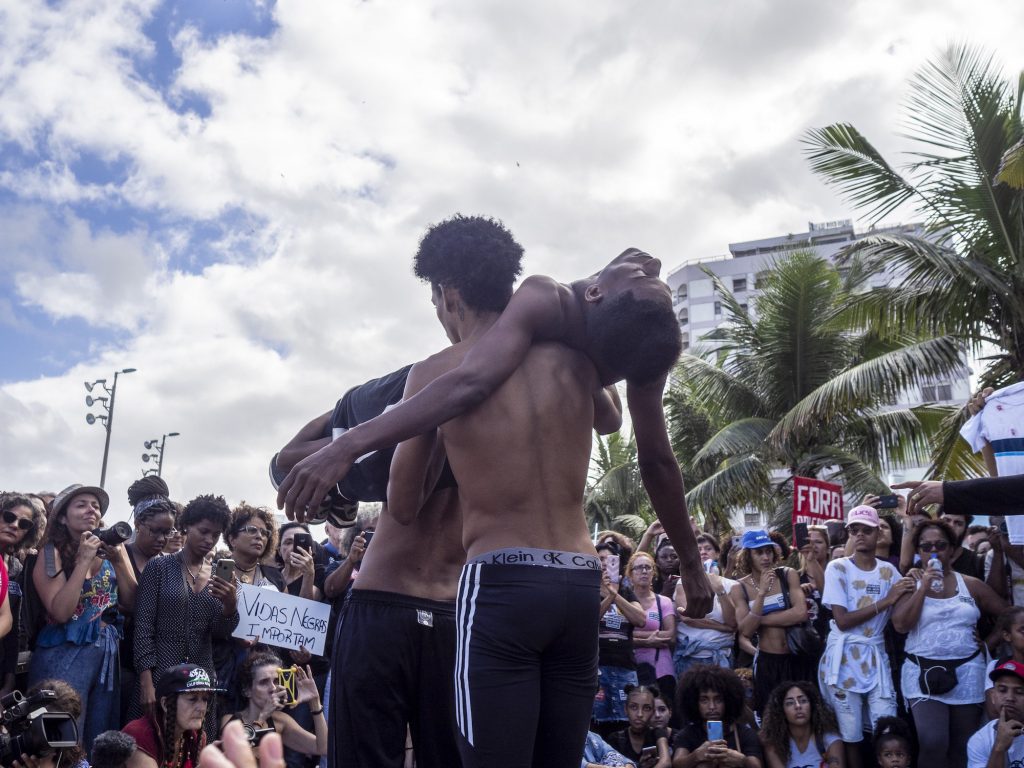 Artists and groups such as the Bando Cultural Favelados from Rocinha, Projeto DanceGrafia; Grupo Nós do Morro of Vidigal; Slam da Poesia; poet João Vitor Nascimento from Vidigal; MC Leonardo of Rocinha and several other groups were responsible for sharing deep concerns and reflections on the current situation in Rio’s favelas by way of artistic expressions that empower their communities and strengthen their identities. 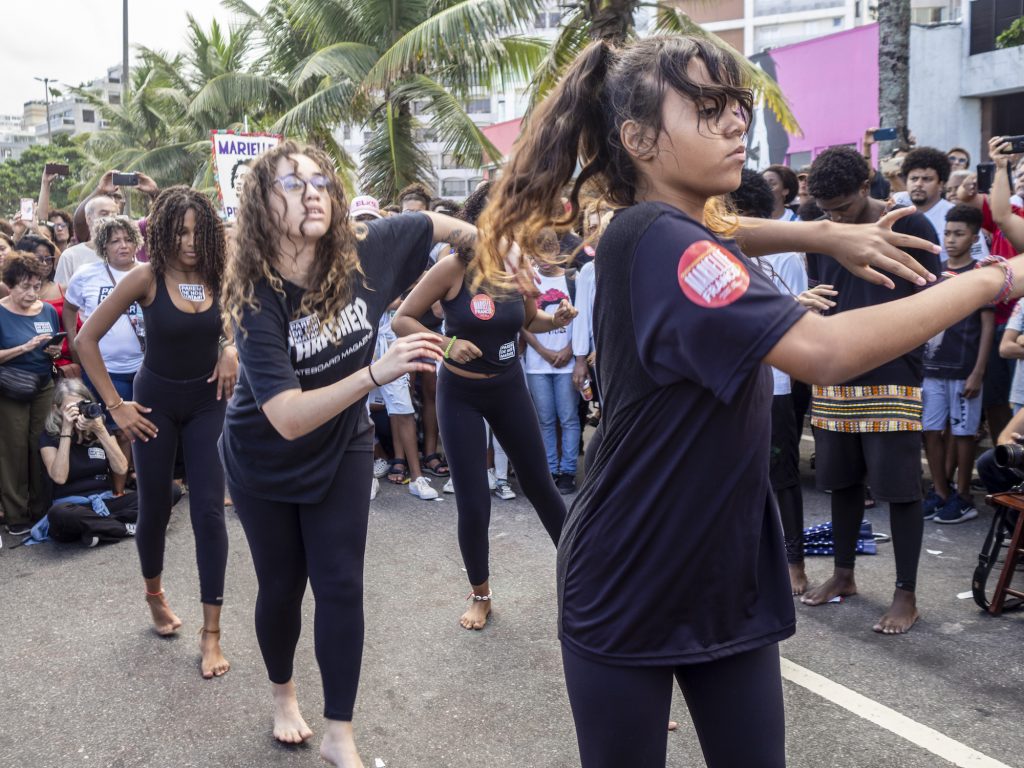 According to the event’s organizers, “Stop Killing Us!” will continue as a Permanent Forum, organizing debates in communities across the city and other demonstrations to unite Rio’s population to put a stop to extrajudicial killings and demand peace in favelas. There will be a plenary session on June 11 at the Federation of Favelas of the State of Rio de Janeiro (FAFERJ) at 6:30pm. All are welcome.

Residents of favelas and formal neighborhoods alike gather to demand the end of extermination policies.

See all of our photos from the demonstration (or click here):