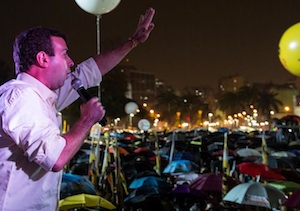 Democracy has strayed far from its origin as a system of governance giving all citizens equal access to decision-making authority and the opportunity to serve in office. Modern day political campaigns not only entail budgets reaching thousands, millions, or even hundreds of millions of dollars, but also require extensive networks of coalitions and connections, all of which completely soil the ideals of democracy. Countries, governments, and democratic systems differ, but in today’s democracies, at least one thing seems to be shared: you need money, and a lot of it, to be elected into political office.

But in Rio’s municipal elections, we are seeing a beacon of hope for democracy, and a different campaign strategy from Marcelo Freixo, the mayoral candidate challenging the incumbent, Eduardo Paes. While we see Paes paying potential rivals, the National Labor Party, R$1 million to not run an opposing candidate, Freixo has managed to run a campaign different from the corrupt and expensive status quo of Brazilian politics.

Freixo, currently one of the most popular state deputies, best known for having led a public investigation into militia activity that resulted in the incarceration of over 400 corrupt police and councilmen, was the basis for the hero legislator in Brazil’s largest box office ticket seller of all time, Elite Squad: The Enemy Within. He hails his campaign as a balance “of the networks and the streets,” reflecting his strategic use of social media like Facebook and Twitter along with thousands of loyal volunteers spreading the word on the street. Freixo has been the definition of an engaged politician in this campaign for mayor, seizing opportunities for public appearance and debate at universities, public forums, community organizations, neighborhood associations, TV appearances and more. 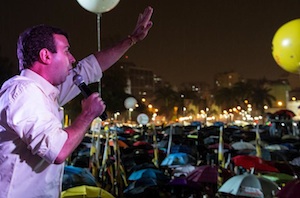 “It is possible to run a different campaign!” Freixo boomed to the crowd of 15,000 remarkably passionate supporters who stood undisturbed in the pouring rain at a rally in Lapa on Friday, September 21st, (360o image) as he stood surrounded by supporters including Brazil’s legendary singer-songwriter Caetano Veloso who composed his popular jingle.

And a different campaign it has been for Freixo and the Socialism and Liberty Party (PSOL). “No one was brought to this plaza by chartered bus, no one is here to get a free meal, there is no money that can buy all of this,” Freixo continued. “We don’t have financing from corporate contractors. The next mayor will not be an functionary of corporate contractors.”

An event like Freixo’s in Lapa two weeks ago has not been held in Rio in well over a decade. Even more noteworthy, Freixo is not just getting people excited about politics and hope for change, he is doing it at a time when Rio is experiencing the biggest economic boom in its history. The angle of promising change is traditionally utilized by politicians in times of economic crisis, but with labor inequality rising and off-the-charts real estate prices displacing people across the urban fabric, Freixo’s sincere and down to earth campaign has managed to galvanize tens of thousands of engaged volunteers, primarily youth. “One of the damaging aspects of [our existing system] is that for young people, it looks like all parties are the same. That they all form coalitions and come to power and behave in a similarly corrupt way,” Freixo explained in a recent interview.

Freixo’s approach depends largely on a loyal network of volunteers. Volunteers are given autonomy in the neighborhoods they represent, meaning each neighborhood campaigning nucleus has free liberty to campaign on Freixo’s behalf in its own creative ways. Furthermore, Freixo appears to be the only candidate not paying campaigners. In a small survey I conducted in Rio’s downtown of 30 people handing out leaflets and holding signs on behalf of political candidates, only Freixo’s were unpaid. The people working for other parties represented a different story; mostly lackluster people handing out leaflets, or in some cases, simply standing next to campaign signs, for up to R$800 a month. Many of these people were voting for the people they were advertising for, but a total of nine out of 30 surveyed were not voting for the person they were advertising for, either because they were voting for someone else, they weren’t voting at all, or were from elsewhere in Brazil and not eligible to vote in Rio. Either way, paid campaigners like this, whether comprising a “bought vote” or not, stray from the ideals of democracy.

Freixo and the PSOL are further set apart from their peers in their refusal to form coalitions with other parties, a tradition that is still seen as essential to winning a campaign. In Brazil, the amount of TV time a candidate gets is based on the size of their party’s coalition. But Freixo managed to go against the status quo in Brazilian politics and run a campaign free of association or coalitions with other parties, and thus with only seconds of TV time, and yet rise from 8% to 19% in polls in some 6 weeks as increasing numbers of people learned about him and his campaign. He boasted with triumph at the rally that, “When we started… many people said that our campaign was very good, but that if we didn’t make any coalitions, we would disappear. We did not disappear, if anyone thought that we would be whiped off the political map because we didn’t make coalitions, because we didn’t have any time on TV, this plaza today is my response.”

So is the Freixo Phenomenon going to sweep Rio’s elections on Sunday? Some judge that a “Gabeira” phenomenon might occur, alluding to the previous mayoral election four years ago when Green Party (PV) candidate Fernando Gabeira rose enough in the first round to force a second round of voting, then almost won. Others say it’s unlikely Paes will fall below the 50% needed to yield a second round. 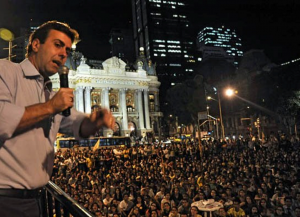 But Freixo’s significance goes beyond one election. His campaign has opened a new chapter in Rio politics. He has used his significant visibility through debates and public presentations to shed light and force debate on a host of questionable practices and policy positions of the current administration, from transportation and housing to health and education, many of which he has shown are being carried out with an eye to quantitative “sound bitey,” rather than qualitative and substantive improvements for the population. His campaign has galvanized youth and community activists from neighborhoods across the city and strengthened their networks, as well as strengthening social movements. Finally, Freixo has shown that a different type of campaign, and participatory democracy, are in fact possible in Rio de Janeiro. His extensive policy and program proposals were designed through his many public meetings and dialogue with civil society.

By demonstrating this in a way he is establishing them as inevitable. Those who’ve been touched by his campaign and have glimpsed this potential are unlikely to back down, regardless of this Sunday’s outcome.

This article was written by Anna Kaiser, and published on October 5, 2012.
in Policies, Solutions, Understanding Rio