This is the fifth article in a year-long partnership with the Behner Stiefel Center for Brazilian Studies at San Diego State University to produce a series of monthly favela-sourced human rights reporting from Rio de Janeiro on RioOnWatch. The following interview was conducted by Carla Souza, an early childhood education professional raised in the favela of Rocinha, as a special contribution to RioOnWatch for this year’s Black Awareness Day.

On October 5, a mutirão (community collective action) took place in Campo Grande, in the West Zone of Rio de Janeiro, in the backyard of Hellen Andrews, located in Bosque das Caboclas (Caboclas Wood)—an area that came about via an urban occupation in the 1960s—on Caboclos Street. The mutirão, which took place with support from the Rio de Janeiro Council on Architecture and Urbanism (CAU/RJ), served to build an ecological cistern, which will recycle rainwater for various purposes. Andrews’ backyard is one of three in Bosque das Caboclas chosen by the Casa Fund for housing repair, as the area is home to a concentrated subgroup of a women’s collective known as the Women’s Popular Collective of the West Zone (CPMZO) of Rio de Janeiro, which seeks to use the space to gather local women and confront diverse subjects and needs. 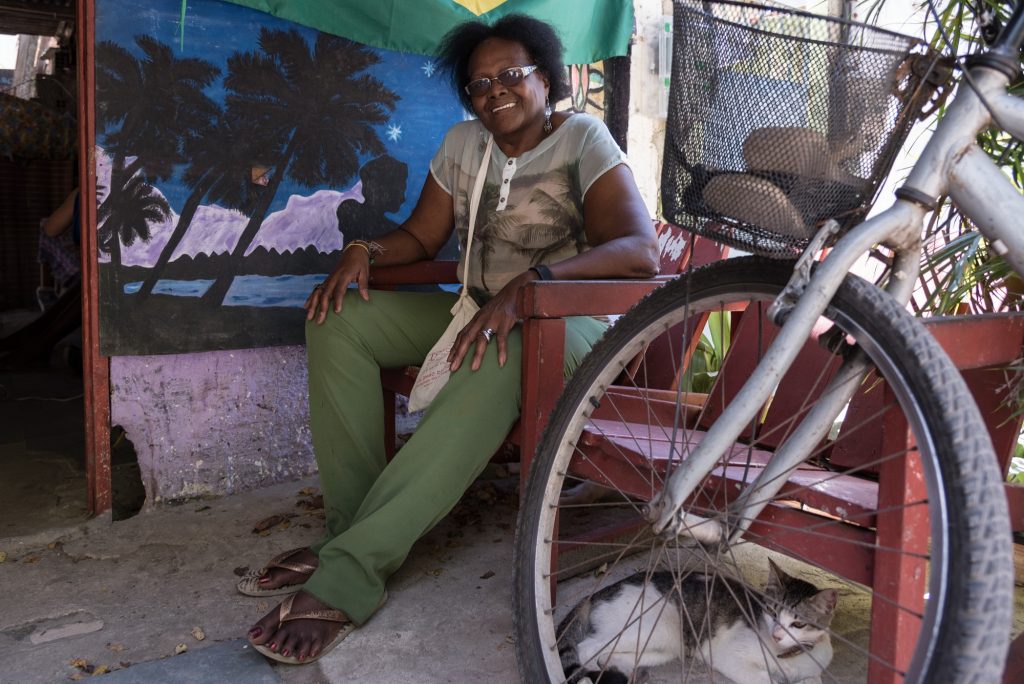 Saney Souza, Andrews’ daughter, is part of the Rio de Janeiro Urban Agriculture Network (Rede CAU) and of the CPMZO. Souza came to understand that, together with actions promoting local development, it was extremely important to talk of feminism. How would this be possible, however, given many local women had so many diverse day-to-day demands in their lives in other parts of the city?

This reflection began when Souza, together with other women, began to ask: What is feminism if it doesn’t care for the home of a sister who has lost her house to the rain? How does one deal with and discuss the death of a friend killed by her own husband? How should sexual violence be discussed with girls who feel responsible when they are abused by men? This line of questioning on the meaning of feminism—above all, black feminism—led Souza to gather with other women, in their own spaces, to speak about issues that are often discussed by women from other social classes but not by black and peripheral women. From that moment on, these women began to meet together with the CPMZO in Bosque das Caboclas, using the space to discuss such issues.

And so it was that, in their backyards, that these women began their formal and informal meetings, debating the topic of agroecology, the right to housing, and black feminism.

On the day of the mutirão, RioOnWatch interviewed Souza and Leslie Loreto, an architect that works with the collective. In these interviews, they told us a bit about the work that the collective undertakes in Bosque das Caboclas—located on Caboclos Street, but symbolically rebaptized as Caboclas (feminine) by the women of the collective. Loreto graduated with a degree in architecture and urbanism from the University of São Paulo (USP) and works as a technical advisor for pro-housing initiatives. She coordinates, together with Elsa Burguiere, Arche – Projetos Participativos, the design team aiding the CPMZO. 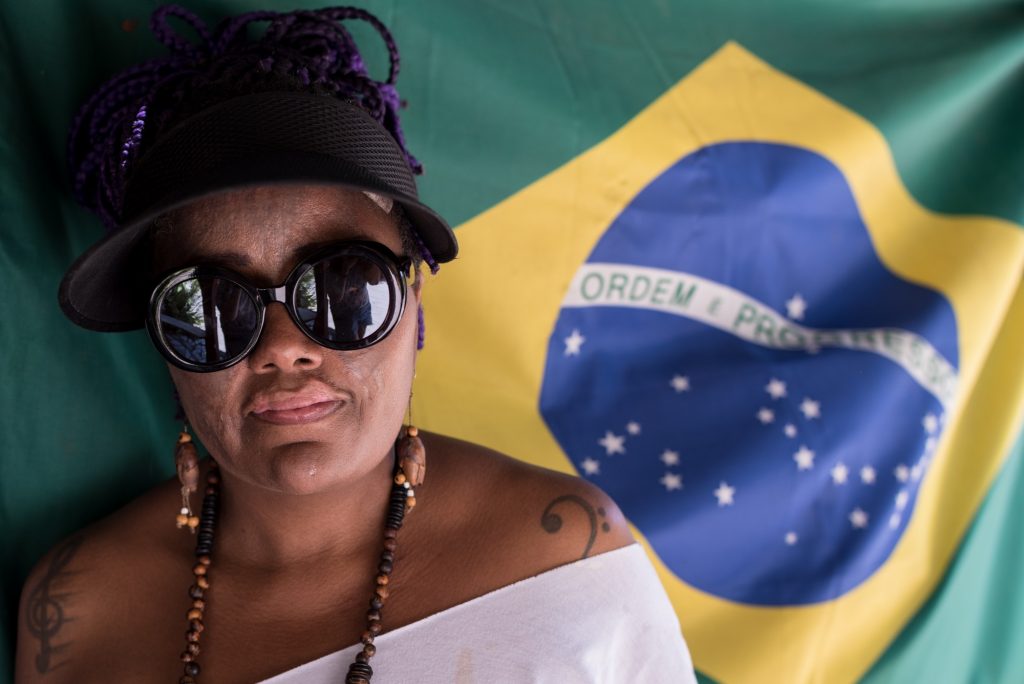 RioOnWatch: What are Bosque das Caboclas and the CPMZO? How do they complement one another?

Souza: Bosque das Caboclas is an urban occupation led by women who organize the group’s life and mission. The collective [CPMZO] is an old popular committee of women from here in the West Zone, who already belonged to the Women’s Committee of Rio de Janeiro, where everything began. They used to meet in the downtown Centro area of the city, with the participation of various women in a self-organized feminist movement in Rio de Janeiro proper. The meetings took place in Centro, and with time, it became increasingly difficult for those coming from the Baixada Fluminense region, from the West Zone, and from the Mountain Region. The meetings became difficult, but we soon took up the fight again and saw, in the West Zone, a chance for a definitive restart. It was then that, through a training program with the Institute for Alternative Policies for the Southern Cone (PACS), in 2014, the movement was reborn as the CPMZO.

We then perceived that the word ‘committee’ had a very closed form, and the word ‘collective’ came about soon afterward. After this training [with PACS] we began to take a look at the territory and conduct a re-reading of everything and critically examine how we existed in this territory. The collective is a front for the struggles of many self-organized women that are in the resistance and in the battles that take place in the territories. 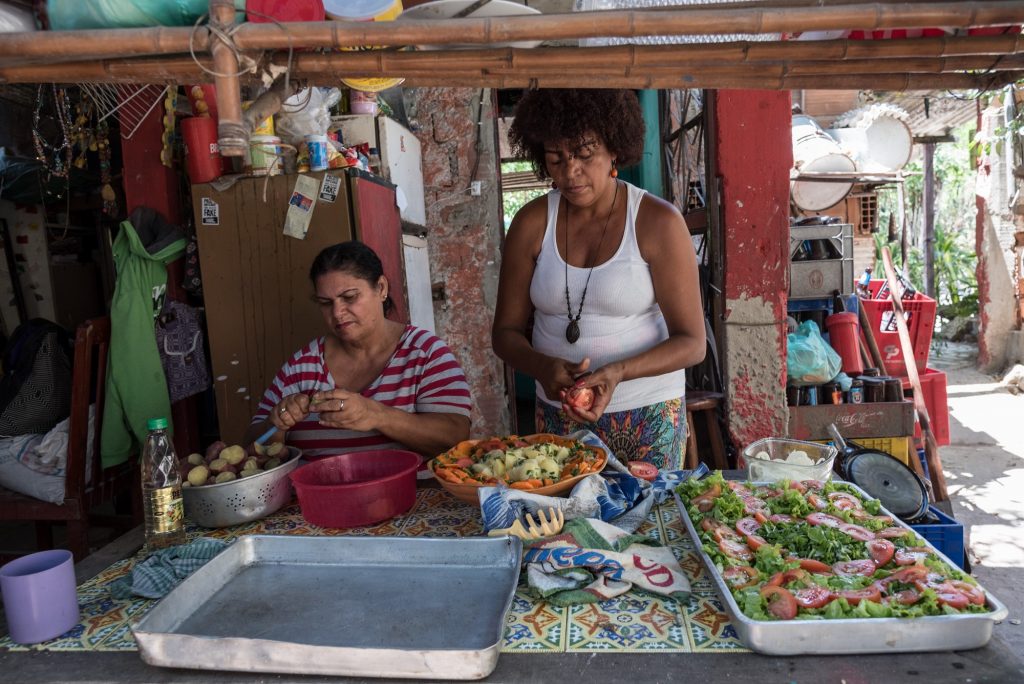 RioOnWatch: How did the idea to create the Bosque das Caboclas come about?

We’ve had some losses. In our occupation [Bosque das Caboclas], we had one friend, Maria.* Maria had a family, was married, with kids. Her husband was really aggressive. She said and spoke little, and we from the community already knew about his being aggressive. [One day] she was abused by her husband in a very violent way. She said he was really rude, that he was very ignorant, that he was from the Northeast [of Brazil]. On the day she was abused, [she] went to the hospital, spent some time admitted. We found out later that she had died because of the damage she had suffered to one of her lungs. Her husband had pushed her into a wall, into a corner, and she hit her back. He told us it was tuberculosis and that was why she had gone to the hospital, but later we got access to the real information and found out that it was physical aggression.

Soon afterward there were two adolescent girls that were raped on Caboclos Street, on their way back from Carnival in 2014. They came to speak with me informally. But I needed to direct them [the girls]. We would have to go to the health post, to the police station, and check in on their health. But, in speaking with them about all of this, they said to me: ‘No, we’re not going, because it was us who did wrong, Saney. We were in the wrong place at the wrong time and we were wearing the wrong kind of clothing. We were the ones who messed up.’ That destroyed me. I ended up crying at home. I then decided that we have to do something. We can’t go on thinking that it is our fault.

Maria didn’t die because her husband was from the Northeast. There is a whole society that permeates all of this. And then we decided after talking to some of our friends, but it was alot between my mom and me at the beginning. I said, ‘Mom we have to do something. We can’t treat this as normal.’ And she said: ‘Look, you have to get the women together.’ I began talking to one, and then to another, and we decided in the community to start a collective. And I’m not positive how we started, but we started talking about this. So I think that Caboclas came out of this silencing that comes from the violence that takes place in our community, to our bodies. And we combined our fight with that of the CPMZO.

RioOnWatch: Bosque das Caboclas has support from women architects who teach civil construction to local women. How did this begin?

Souza: We began to get in touch with people we knew in order to think together. We decided to send various emails, until one day Leslie and Elsa [two architects] learned of these emails about women in the West Zone that wanted to talk about housing, and we went to them. Then they came here to learn more about the community. After that meeting, Leslie and Elsa showed us some grant opportunities related to our mission, and the Casa Fund grant came out, and we quickly wrote up a project [called Women in Action]. We soon found out that we were selected out of the 150 candidates for the grant. The CPMZO was there, being examined for the grant for repairs to three houses damaged by the rain. 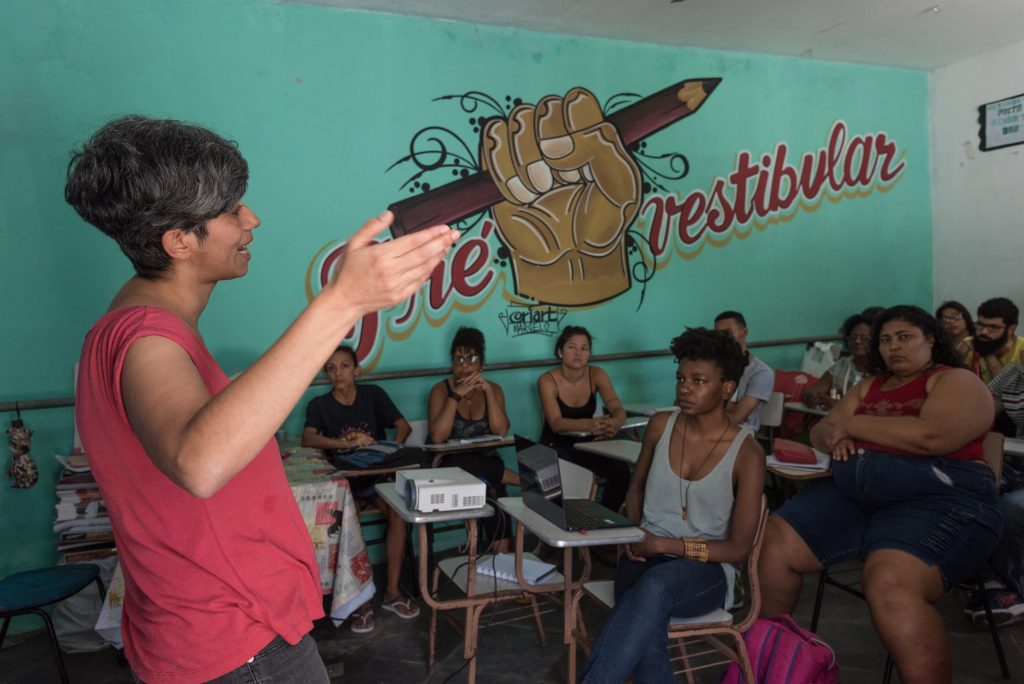 RioOnWatch: What is the importance of this project that won the Fundo Casa grant for the Bosque das Caboclas?

Loreto: The importance of this is enormous. In part because, beginning with this project, low-income women that have never worked with repairs or small renovations in their homes have come to better understand how to do these activities, taking on a technical knowledge that is still very linked to the masculine world, to civil construction. This gives these women more autonomy, more understanding and, indirectly, gives value to women’s fight against oppression.

But the greater importance is in the fact that they did all of this in a collective manner, not individual, united through bonds of solidarity, of class, and of love. This organized work, accomplished through various mutirões, with the help of many hands—which did not occur without mishaps and setbacks—is, without a doubt, the soul of the project. In these times when we are compelled to distance ourselves from one another, having the opportunity [to work with] a collective organization like the Women in Action Project, this brings us only joy.

RioOnWatch: Has being a part of this project made a difference in your career?

Loreto: I’ve worked with organized populations for a while already, more than 20 years, always giving architectural advice to housing movements that wanted to build their own homes. But this project was a challenge without a doubt, because it made me think about the meaning of working with women, with people who never thought about, necessarily, building their own homes. They wanted to resolve the problems with their homes and have better spaces to live. Though it was a small objective, it carried, in essence, a radical necessity of union and connection among women. Without the presence of an oppressive male figure, they transformed the work into a space of joy, of lightness, and of affection.

For us women that already work in civil construction, living this lightness allowed me to see how a women-only construction site might be. And this was something new for me and for us from Arche. Something really thought-provoking for our future work. 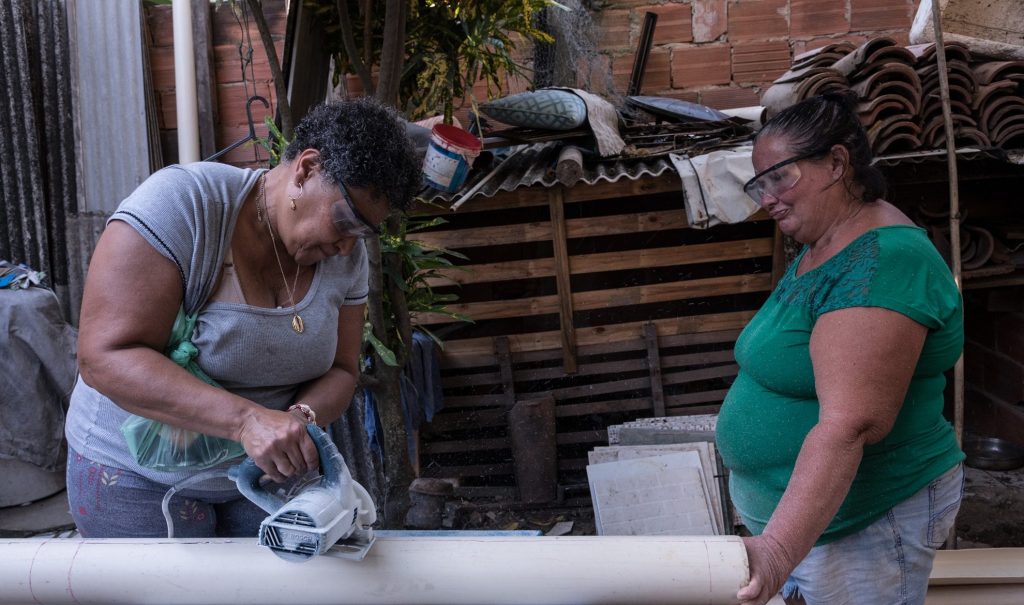 RioOnWatch: What is black peripheral agroecology?

Souza: Backyards are everything. It is where we meet, where we converse, and where many issues come together, most of all about women’s fight against violence. We use this practice of ours, the construction of territory, in order to get together and to listen to each other. The listening is so important.

When I say that without backyards and without the earth it would be very difficult, it is in the sense of production of life. We broaden [the concept and practice] of agroecology. It is not just a question of planting and eating well. If [agroecology] is not interwoven with the anti-racist battle, it doesn’t make any sense, because, on this same soil, where we are planting, it’s the same soil where a mother loses her child. We have to associate one thing with the other. We look at black soil and we’re happy, because we know it will be good for planting and harvesting, and will be healthy and without poisons, and we can share or sell from it. But it is upon this same ground that mothers are bent over, crying over their bleeding child, killed by the State.

It is the same ground, the same soil, the same black woman. And it makes no sense for us to think about one thing separately from the other. That is why we have gone on building and tightening all of this on our soil here. The soil is one. We are one. This black, peripheral agroecology [movement] has come to deconstruct the idea that the only ones with good food on their plates are those that can afford to buy organic. That’s wrong. 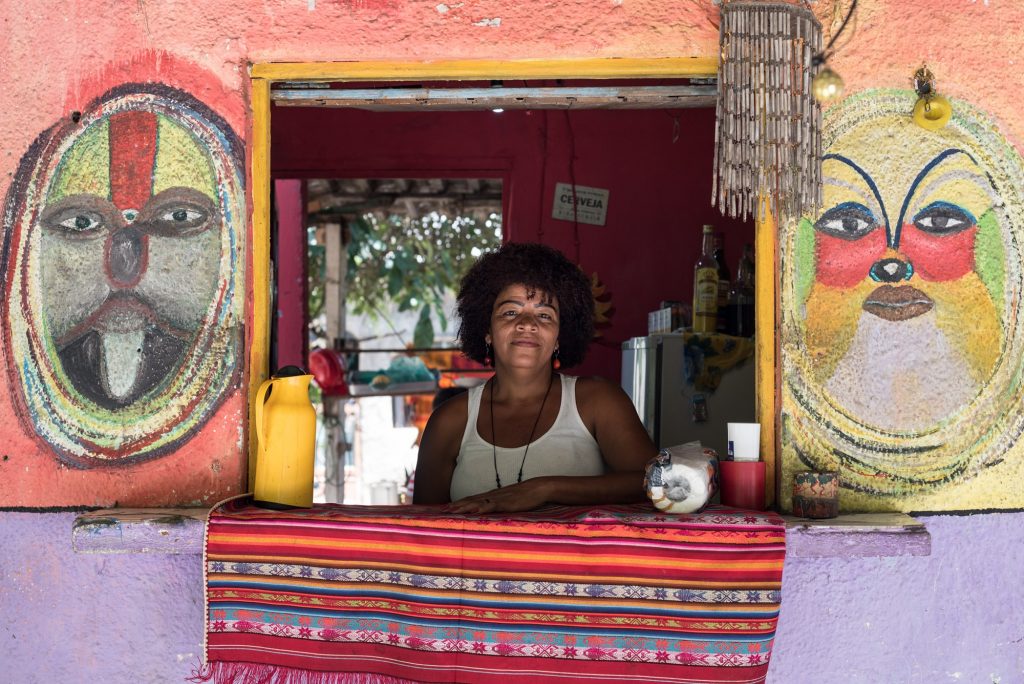