The following is an op-ed by Tetsuo Ogawa, a Tokyo homeless resident and housing activist. Cross-published in collaboration with the Los Angeles-based platform KNOCK, Ogawa’s firsthand account of ongoing removals provides a close look at the effects of the privatization of public spaces in the lead-up to the 2020 Tokyo Olympics. As the city prepares to host the games later this year, RioOnWatch remains committed to serving as an Olympic watchdog news site and supporting Olympic resistance movements around the world.

Tokyo, Japan—Flocks of young people and tourists seeped past like muddy streams, filling the world-famous Shibuya Scramble intersection. More than 100,000 were gathering there to celebrate the New Year’s Eve countdown. A few blocks away at a small playground, around 50 homeless people who live in parks, together with their supporters, quietly congregated to welcome the New Year. Since all of the dayworker centers and city offices are closed for the holiday, around this time of year, homeless people come together by building tents and sharing meals. It’s been an annual tradition for nearly 20 years, making warm meals and bedding in almost-freezing temperatures. The year 2020 will be remembered as the year of the Tokyo Olympics. For homeless communities, however, the Olympic year is nothing but an ominous one.

In March 2013, the International Olympic Committee (IOC)’s Evaluation Commission, which is responsible for inspecting candidate cities, conducted an official visit to Tokyo for a week. Tokyo’s Metropolitan Government welcomed the Commission by spending nearly US$5.5 million on the trip. Preparations included two weeks of city sweeps, removing homeless people’s tents and other possessions along the streets where the IOC Evaluation Commission members would pass by on their luxury bus tour. Adjacent to the National Olympic Stadium, Meiji Park has been home to between 10 and 20 people for the past 30 years. However, the residents were suddenly relocated to a small corner of the park, with white fabric hiding them from the gaze of the IOC. This event confirmed our suspicion: if you are a homeless person living in a potential Olympic city, you are not allowed to exist there any longer.

In October 2013, one month after the IOC chose Tokyo to host the 2020 Games, Tokyo officials went directly to homeless people to tell them that, due to upcoming construction, they had no choice but to vacate Meiji Park. While some voluntarily left the park, a few remained, holding down their tent village. In April 2016, the Japan Sports Council (JSC), to which the Tokyo Metropolitan Government had transferred the land management rights of Meiji Park, stepped in and suddenly evicted the remaining park residents by force after hurriedly clearing a few procedures. They argued that the haste was necessary to complete the new National Stadium within the scheduled timeline, without which the 2020 Olympics themselves would not be possible. The former Meiji Park residents have since brought the matter to court and are fighting the JSC regarding this unjust eviction.

Miyashita Park, next to Shibuya Station, is rapidly being transformed into an 18-story hotel with an adjacent 5-story shopping mall slated to open in June 2020. The park itself will be relocated onto the rooftop of this newly developed mall. The project was planned by Mitsui Fudosan Realty, the top-selling real estate developer in Japan, which predicts a high demand for hotels during the Olympic Games. The park was closed for reconstruction on March 27, 2017, without informing local park users. About ten people who had been sleeping there were removed in the rain.

Historically, many public parks in Japan have functioned as shelters for community members who lost their homes due to natural disasters and the devastations of war. Because of this history, there has been a general culture of tolerance by both local governments and community members for homeless people who use park spaces to live in their own tents and shacks. For example, in the early 2000s, there were about 650 tents and shacks inside Ueno Park (one of the largest parks in Tokyo), 350 in Yoyogi Park, and around 100 in the relatively smaller Miyashita Park. However, we gradually began seeing more security officers and many parks began closing during the nighttime. Developers and cities started to look at public parks as unused resources and a city parks law was revised in order for private capital to gain easier access to public parks. Among the various excuses used to support the transformation of city parks into private property, the Olympics have frequently provided justification.

And what we’re losing in the midst of this change is the history and principle of city parks that have existed to serve poor people, and the fact that parks are where many homeless people can find stability and community.

Often the evictions of homeless people happen away from the public eye. If you are not connected to social justice organizations or if you live remotely, your eviction case will likely not receive attention. One exception, though, was an eviction that gained attention on social media late last year, when a group of homeless people was removed from a park by the Tokyo Bay to clear the way for the construction of an Olympic facility. The contractor never contacted park residents directly or provided information, but just posted a sign prohibiting entry to the site. Yet, as of the time of writing this article, the construction has not begun, mainly due to ongoing negotiations with the Tokyo 2020 Organizing Committee. If we hadn’t heard from the local community about this eviction, we suspect it would have been completed secretly. 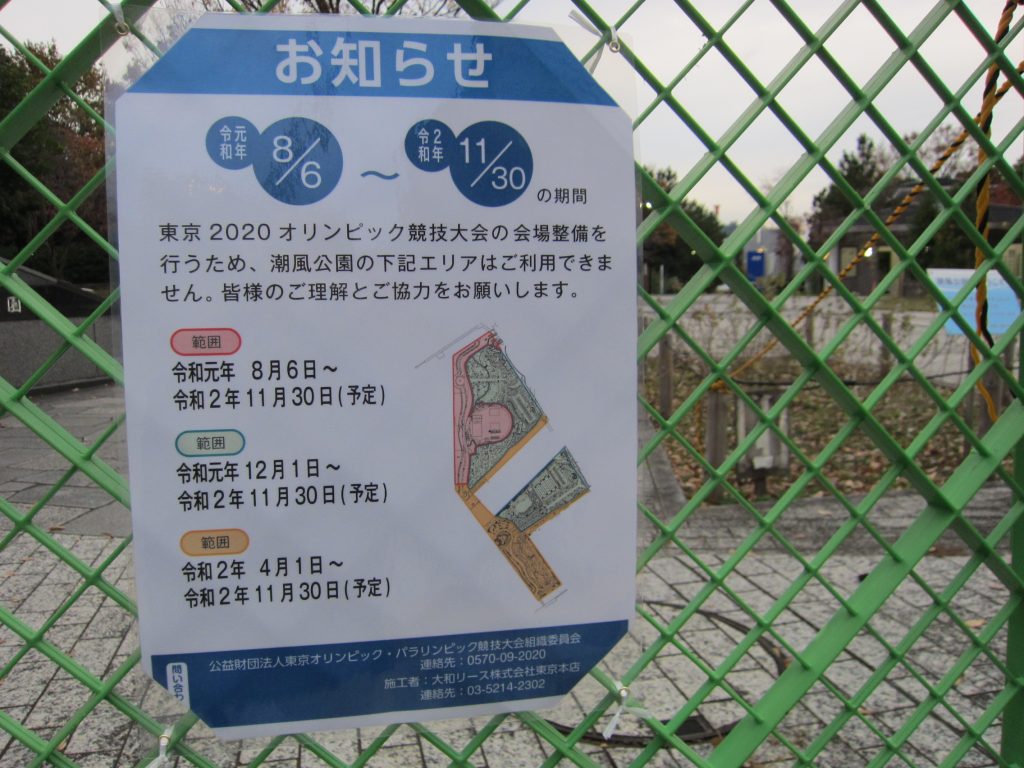 We also found out that on December 1, 2019, another group of homeless people was evicted from nearby Shiokaze Park, which has been marked for beach volleyball matches. Again, there has been no communication from the government or the Tokyo 2020 Organizing Committee to the park residents regarding the construction. We expect more new construction for less permanent Olympic facilities in the coming months. We are concerned that many other public parks will be turned into fan zones with large screens, which will potentially cause more evictions.

We also fear that a serious crackdown against people who live in the streets and sleep at train stations and on sidewalks has yet to begin. Around 3,000 homeless people in Tokyo (the official count as of January 2019 is 1,126, but we estimate there are three times as many) are living every day with anxiety about the Olympics.

It is clear to us that the Olympics inevitably involve removing the poor from their homes, as these mega sport events are an excuse for politicians and capitalist elites to establish large-scale urban redevelopments. It has always worked this way, as it did for the homeless in Rio de Janeiro for 2016, in Atlanta for 1996, and in Los Angeles for 1984, and as it will for cities like Paris and Los Angeles that are planning to host the upcoming Olympic Games. While we fight the Olympic machine itself, we also need to draw attention to those who are being evicted and oppressed in host cities around the world. We must fight in order to ensure our survival and dignity.

Tetsuo Ogawa is an unhoused resident of Tokyo who has lived in a park in Shibuya since 2003. Since 2011, he has been a member of Hangorin no Kai, an anti-Olympic group that investigates and protests various problems tied to the Olympic Games. Translation was provided by Yuko Tonohira.

This article was written by Tetsuo Ogawa, and published on January 24, 2020.
Translation provided by Yuko Tonohira. in #HousingWatch, Opinion, Violations