This is the eighth article in a year-long partnership with the Behner Stiefel Center for Brazilian Studies at San Diego State University to produce a series of monthly favela-sourced human rights and environmental justice reporting from Rio de Janeiro on RioOnWatch.

On the sunny Saturday of February 15, the 123-year-old original favela of Morro da Providência received volunteers to take part in a forestry management collective action in a syntropic agroforestry system. Providência is gaining increasing attention for its various agroforestry initiatives. This particular system has been under development for nine months in the area above Rio de Janeiro port’s João Ricardo Tunnel. The action of February 15 was focused on constructing a community reading corner.

The initiative is part of the community’s Intelligent Garden (Horta Inteligente) project. The project was launched in 2015 by local resident Elisângela Almeida Oliveira, who was only 18 at the time, and is managed by environmental engineer Lorena Portela, a young professional in the area of agroecology and permaculture. Portela joined Oliveira a year following the project’s founding.

In the first two years of the project, Intelligent Garden focused its efforts on weekly environmental education activities, attending to more than 400 children with recycling, planting, culinary, and art activities at the Tia Dora Municipal Daycare Center, as well as organizing workshops at local fairs or in the garden of the 100-year-old Methodist Church, in neighboring Gamboa. Initially, these actions were supported by the youth-empowerment NGO Networks for Youth Agency. During various periods, the project was maintained entirely by volunteers and the persistence of Oliveira, her mother, and Portela. Little by little, with the support of partners in the community, they were able to expand their activities to older children between the ages of 6 and 12, both from inside and outside the favela. 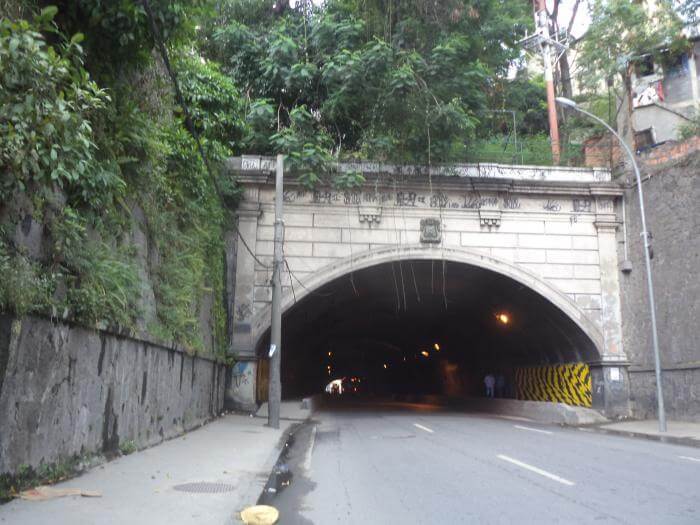 After nearly five years, nine months ago, the project took the initiative to revitalize a vacant public space on top of the João Ricardo Tunnel constructed in 1919, in Gamboa. This space above the tunnel, known as Java, is one of the main entrances to Morro da Providência. Before the initiative, this space was a site for the dumping of garbage, and tall invasive brush dominated the area, leaving the area at risk of generating illness. After nine months of occupation, the space has already been transformed, and on the mid-February Saturday, Intelligent Garden boosted its actions further, inviting resident and outside volunteers to carry out maintenance on the site and rebuild a reading corner for book donations and exchange.

The collective action, or mutirão, focused on supporting the area’s fruit trees and local management. The day’s actions involved the cleaning and removal of trash which had accumulated in the surrounding area; cutting back the grasses; pruning overgrown daisies, castor oil plants, tree spinach, elephants ears, and yams; pruning the fruit trees; planting yams and putting up structures for blackberries, cassava; and sowing sunflower seeds, corn and rattle pods in spaces with lots of sunlight. The work included twelve volunteers. 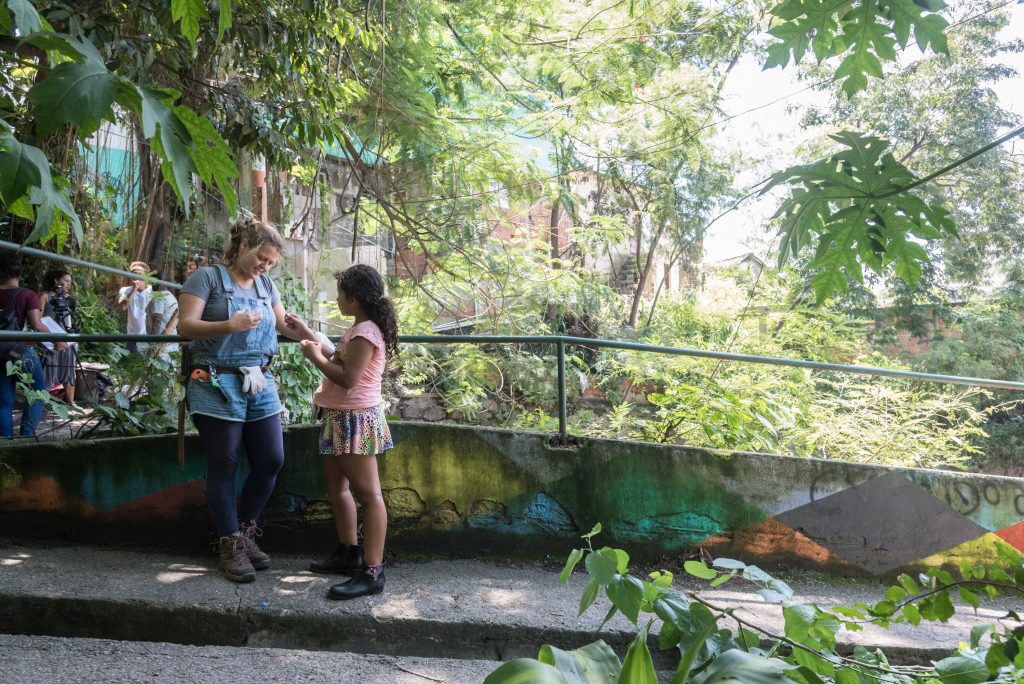 Motivation for the Revitalization of the Space

Java, the area above the tunnel, consists of a stretch of land surrounded by a small overgrown area. Before, the site, besides containing trash, scared residents as they passed by. However, Oliveira had a different view of the area, she tells us: “I always went that way when I was in primary school. At those times I thought: ‘How lovely it is to be here.’ I would sit on a stone and stay there observing. It was a dream of mine to do something in that space.” Oliveira continues: “In the beginning, many residents said it wouldn’t work. But, speaking with residents, people offered their support. The space is everyone’s and they understood that.”

According to Portela, the residents of the surrounding area, and some shopkeepers, started to support the initiative by allowing people to use their bathrooms and their fridges to store the lunches given to the volunteers during the collective action. For Portela, the objective of modifying the site is to “create a communal space, a space of coexistence, changing people’s relationship with the space. The trash reduced a lot and the residents started to bring seedlings to plant. Some say that it had been a wish of their’s to plant there.” 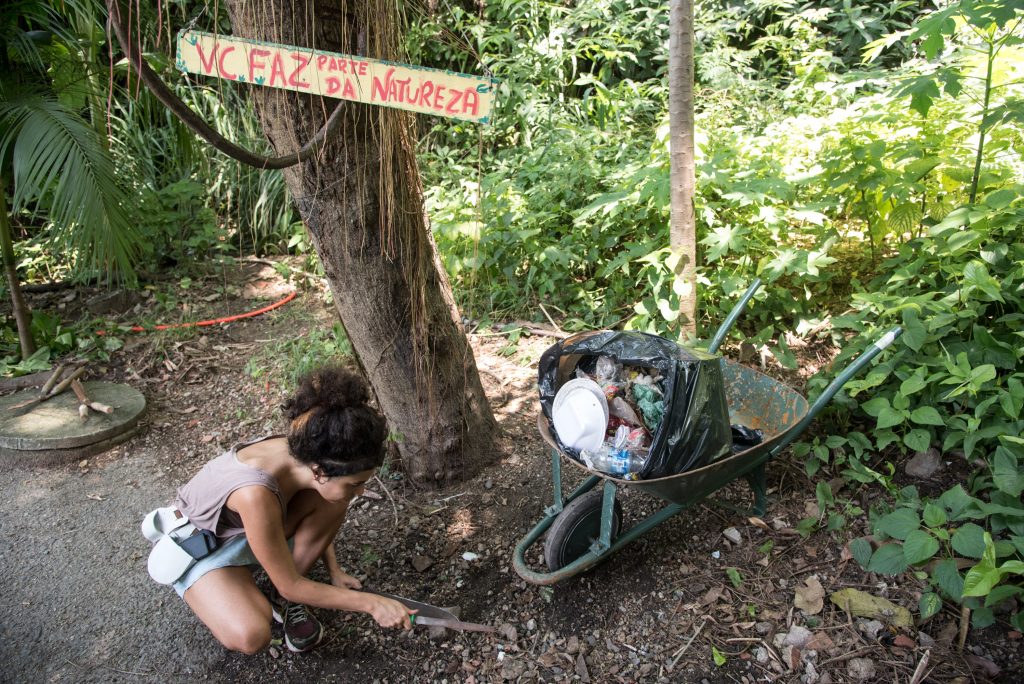 Portela adds: “Many residents say they go through and they are always watching [over the space]. When they happen to see someone trying to pick one of the plants they indicate that they can’t. We don’t have anyone to complain to. A network formed itself. We always rely on the residents and some of the bar owners. Our biggest victory is that we were able to plant and maintain [the forest]. We were prepared to see everything pulled out [by vandals], but we had faith and it worked. Everyone says that it’s beautiful.”

The space includes a very careful set-up with signs indicating the names of the fruit trees and phrases like: “You are part of nature,” and “Trash in the trash.” There is even an artistic installation made with the garbage retrieved during the days when we do upkeep of the plants. These details create a welcoming environment of belonging. On the day of the mutirão, it was common to see residents going down that way smiling, saying hello and even photographing the agroforestry, which everyone calls the little orchard. 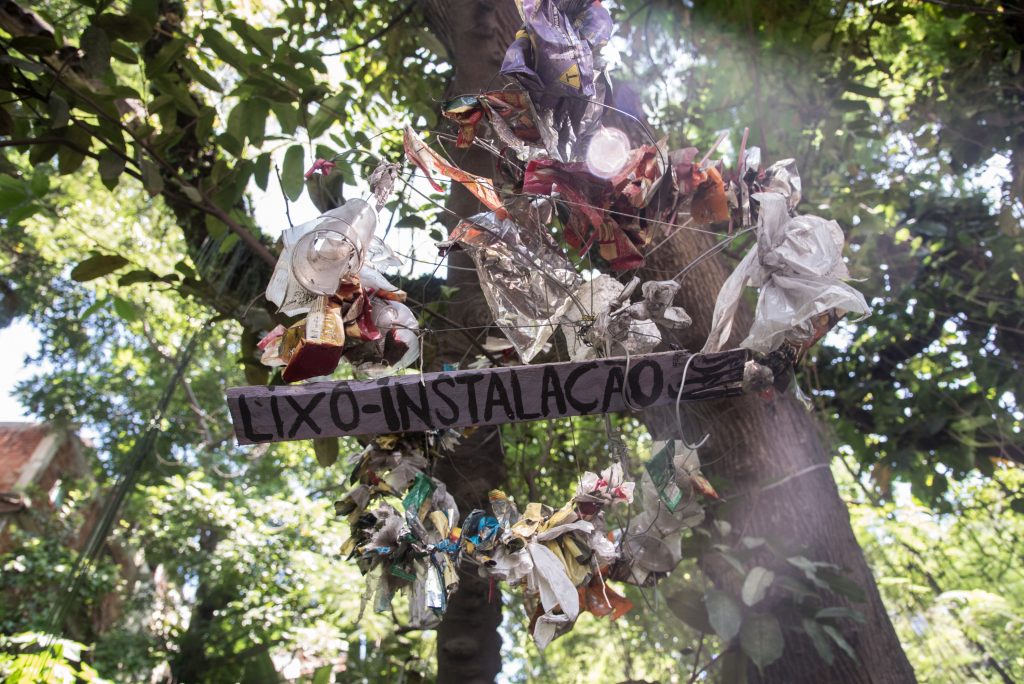 An art installation made from the trash collected during the mutirão. Photo: Bárbara Dias

Portela says that the techniques utilized in Java used to be demonstrated in workshops held by Intelligent Garden, occasionally and not in green spaces, such that the knowledge wasn’t easily assimilated. She explains that, having a considerable-sized green space now, the modifications made by residents and volunteers, together with the action of nature itself, are well recognized. In the collective actions, the engineer spurns technical terms when the group is made up of small children; the learning thus happens empirically.

Portela explains what a syntropic agroforest is: “It is a system of plants in which we mix many different species of fruit plants in a reduced space. Rather than planting only papaya, for example, we try to replicate what takes place in nature. That’s why we call it a forest. Think about the Atlantic Forest: various species united, each in their own time, some preferring shadow, some preferring light. We understand the needs of each plant: which ones need more water, which ones need more light. We teach about these needs. For example, tomato plants need to be close to banana trees because they support each other. And one of the principles of agroecology and agroforestry is planting without the use of chemicals. We don’t use such specific terms with the kids though: they learn by doing as they engage in our activities.”

Engaging with Volunteers Both From Within and Without the Community

The attendance for the day’s mutirão, held on a Saturday morning under the summer sun—not to mention in the middle of carnival with blocos parading all around—demonstrated that the volunteers from the community and elsewhere, who joined to break down the soil and sow seeds, are dedicated to maintaining the beauty of the new space. They recognize the value of agroforestry in the community. 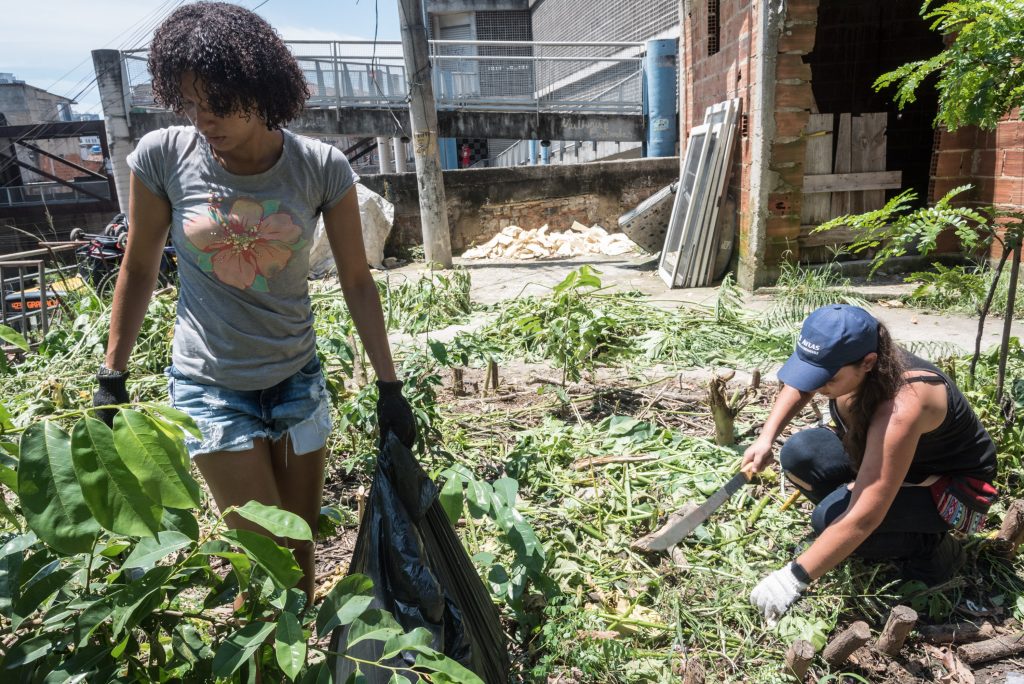 Larissa Alves, 23, a resident of Providência, has been with the project since the beginning. She takes time off from her classes in nutrition to help in the mutirões.

“For me, it was something really important for the community [the greening occupation of the tunnel area], because it changed for those of us that would pass by and see so much trash… Now we get there and it’s something different. We see yams, potatoes… I was 19 and Elisângela had already begun [Intelligent Garden] and had no team. So, I joined. Since I am studying abroad [in Argentina], when I come here I do all of the activities with them. I want to do something for my community,” says Alves.

Volunteer Rodrigo Toscano learned about the project through Portela. “Working with the earth is an activity that has interested me since I was little and the work of planting in the context of the city is something urgent. Residents seem to really like the creators of the project and I believe that they created a nurturing bond with them, as they take care of the public space that had often gone unnoticed and that had gained a new life. The idea that a community can be the producer of its own food, with accessible and organic techniques, breaks with the whole market-based rules of production that only seek profit. I also believe that this care aids in the self-esteem and happiness of residents, who pass through there each day as they leave and return home.” 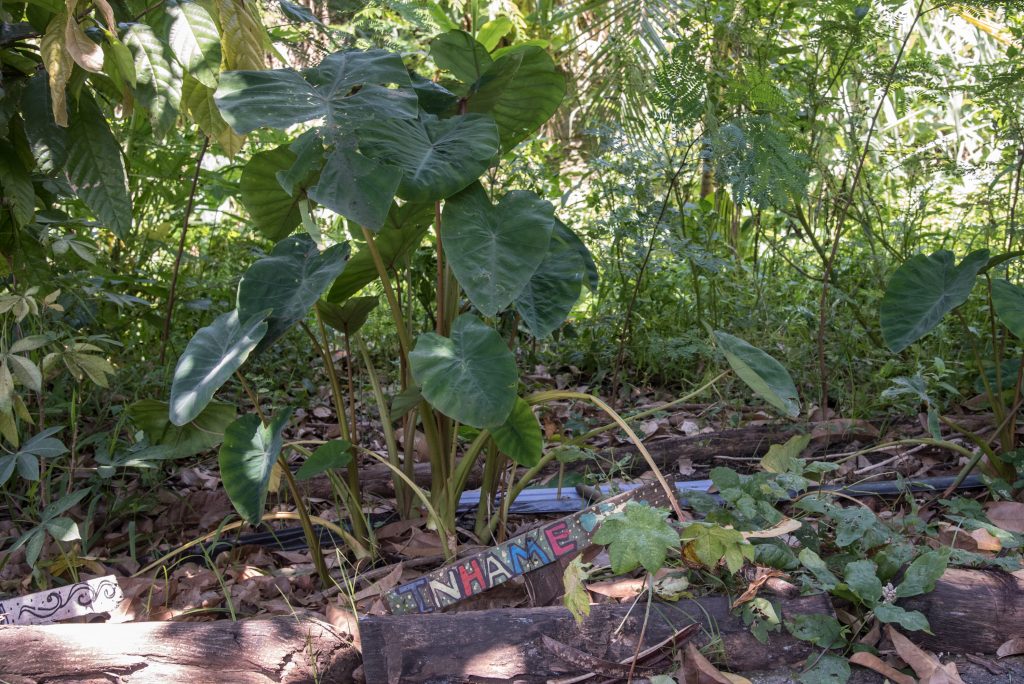 A yam plant with an identification plaque. Photo: Bárbara Dias

Ângela Lima Almeida, Oliveira’s mother, is a great motivator for the project. During the collective action, she consistently dug in, getting her hands dirty and actively participating in the management of the space. She stopped working only to talk to RioOnWatch, speaking proudly of the initiative’s first results and its impact on her life and that of her family after the creation of the Intelligent Garden project.

“Êlisangela began to participate in the [Networks for Youth] Agency. Actually, this garden project hadn’t been created yet, because they [together with the Agency] created Caçamba Inteligente [Intelligent Dumpster], but they just needed greater resources and were unable to invest. So they saw that Elisângela had good potential and they didn’t want to give up. It was thus that they asked her if she had some other project that she could present, to see if they would be able to make this connection with the value that could be invested, and she had the idea for Horta Inteligente… When she presented the project, I got excited and went to help. Since then, we have embraced her cause [the whole family] and we are, to this day, part of the fight. Whenever there is a mutirão, and we’re able to be part of it, we jump in. When we can’t, we always prepare snacks and help her to take them. We saw that she really wanted to take this project seriously.” 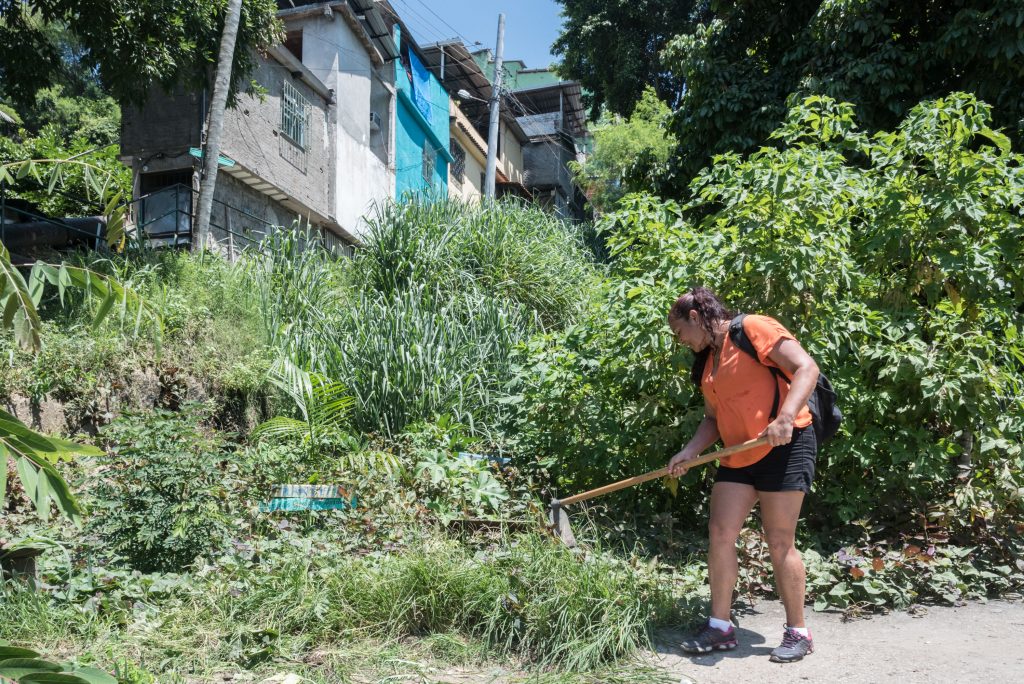 On witnessing the transformation of the space, the feeling of belonging and valuing of the collective result became immediately perceptible. And this day of action for the maintenance of the forest finished with the group planting another kind of “seed”: the seed of literature!

The event’s coordinators noticed that, after fitting the agroforestry site with benches and plaques, the place came to be used more frequently by passers-by. It was from there that the idea to have a book donation and exchange box came about. Almeida says that this is the second attempt to begin a reading corner in the forest. The first time, the bin was stolen along with the books inside it. But the project is resilient, and the reading corner returned.

One of the most noticeable characteristics of the Intelligent Garden project is its perseverance in maintaining a live, organic space for coexistence, involving participation from all groups. The result has been the creation of a transformed and transformative place for residents and visitors to the first favela, Morro da Providência. 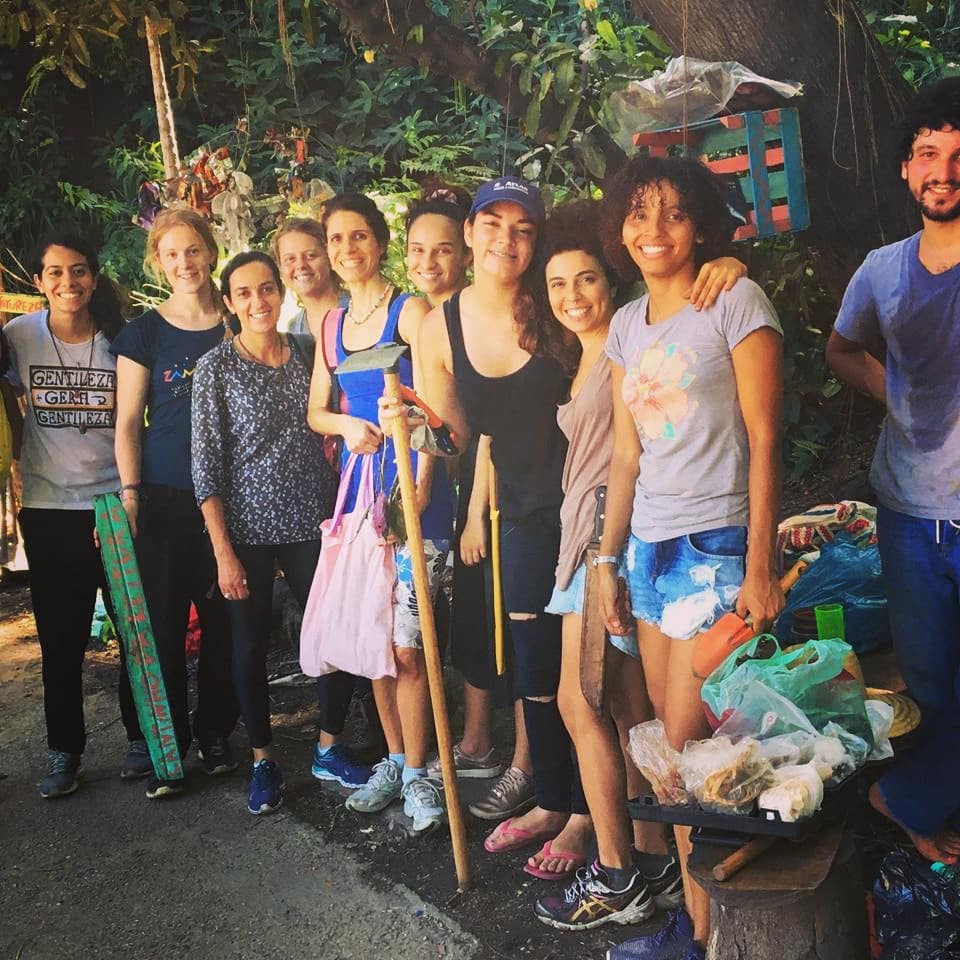