For the original article in Portuguese by Michel Silva published in Favela em Pauta click here.

This is the first article in what will be a spotlighted issue on RioOnWatch for the foreseeable future: the new coronavirus as it impacts Rio de Janeiro’s favelas. The series will feature both original RioOnWatch publications and those translated from community sources such as this one.

Favelas have high population densities, houses in very close proximity to one another, and structural limitations to guaranteeing adequate isolation in case of contamination by the virus.

On Wednesday, March 11, the World Health Organization (WHO) declared the new coronavirus outbreak a pandemic. The spread of the disease, Covid-19, has been worrying Rio de Janeiro’s public health authorities in relation to favelas due to four factors: their high population density, the very close proximity of houses, structural limitations to guaranteeing adequate isolation in case of contamination by the virus, and a history of social exclusion.

Coronavirus is a disease transmitted by close personal contact with infected people or from the coughing or sneezing of infected people. Touching contaminated objects or surfaces and then touching one’s mouth, nose, or eyes also increases the risks of contracting the disease. The largest scientific study of Covid-19 so far, published in the journal JAMA, shows a 2.3% mortality rate, 14.8% for people over the age of 80, 8% for people over 70, and in cases where the disease turns critical, there is a 49% mortality rate. The risks were greater for people with pre-existing diseases, like high blood pressure, diabetes, cardiovascular diseases, chronic breathing problems, and cancer.

According to infectious disease specialist Carlos Starling, director of the Minas Gerais Infectology Society, favela residents run serious risks on account of unfavorable sanitary conditions. “The virus can be isolated in urine and feces, but we still don’t know the impact of the presence of the virus in feces and urine to the process of transmission. Just the fact of people being very close to each other and getting together in festive environments, after a beer or two, all the principles that are being discussed concerning social distancing, being careful that contact between people isn’t too intense, they are forgotten, and this facilitates the transmission process,” he explained, using a festive event as an example. 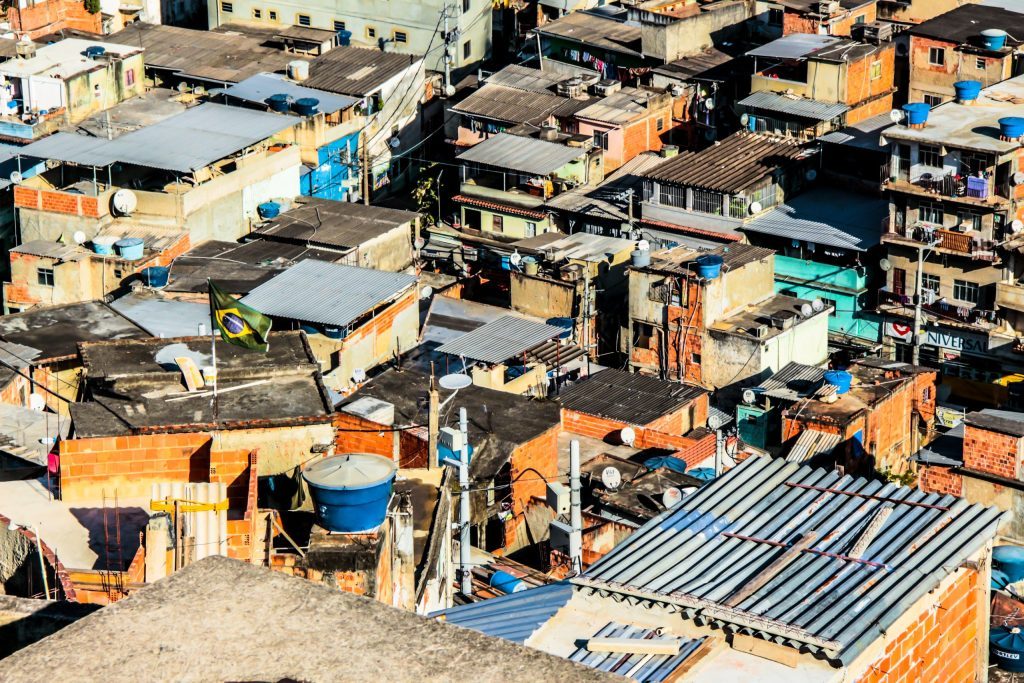 Complexo do Alemão, located in the North Zone of the city, has a high population density. Photo: Bento Fábio/Coletivo Papo Reto

According to the WHO, the protective measures are the same as the ones used to prevent respiratory diseases, for example: if a person has a fever, cough, and difficulty breathing, they should seek medical assistance as soon as possible and share an account of their recent travels with the health professional; hands should be washed with soap and water or with alcohol-based hand sanitizers; when coughing or sneezing, cover the mouth and nose with one’s arm or with a tissue—afterwards, throw the tissue away and disinfect hands.

As of now, there exists no vaccine or specific treatment, only treatment of symptoms. Extreme cases may require supplemental oxygen and mechanical ventilators.

In Rio de Janeiro, one of the means of entry for this virus may be tourism. The favela of Rocinha, in the South Zone, receives the majority of visits from foreign tourists who put the favela on their site-seeing itineraries. Data from Brazil’s International Tourist Demand study, produced by the Ministry of Tourism, shows that it was Italians, Germans, French, North Americans, Chileans, and Argentines that most visited Rio de Janeiro between 2014 and 2018.

According to infectious disease specialist Carlos Starling, Rocinha residents run risks by receiving tourists from different countries at the moment. “It is possible that tourists are carrying the virus. If they have caught colds, or even asymptomatic individuals, we know that they can transmit it. What I recommend is that should tourists arrive in specific places, the traditional greeting of shaking hands should not happen. Instead, maintain a certain distance. This is important because the [initial] circulation of the virus in Brazil is coming from outside to inside. So yes, there is this possibility” the specialist warns, adding, “it is prudent for tourism operators to take precautions. Tourists with the flu should not go into favelas. There needs to be screening and orientation for all of those doing this kind of tourism. I understand that tourism is important in the city of Rio, for the favelas. But at this time all precautions need to be taken so that the population isn’t infected by people coming from regions where the circulation of the virus is very intense, principally, from Asia and Europe.”

Jeep Tour, one of the companies that conducts guided tours in Rocinha and Santa Marta, another favela in the South Zone of the city, continues promoting visits to the hills, though they have adopted hygienic safety measures. The company is providing alcohol gel for the passengers and washing their vehicles. “We are on total alert and there is a request from these organizations [the Ministry of Health and the Municipal and State Health Secretariats] for the immediate suspension of the services we provide, always prioritizing the integrity of the Carioca population, which we are a part of, and also of our visitors,” Jeep Tour told Favela em Pauta.

Case numbers refer to the months of January, February, and March 2020

Source: Municipal Secretariat for Health and the Ministry of Health

Although there is fear because of the disease, until now the majority of people infected have a good socioeconomic status, as indicated by their travels abroad. But the tendency is that the poorest population will be most affected. It is estimated that Brazil will have an ‘extraordinary’ increase in cases of coronavirus over the next two to four weeks, according to the Executive Secretary of the Ministry of Health, João Gabbardo dos Reis. “We know that, in the coming days, in the coming weeks, Brazil may have behavior identical to any one of these [other] countries. In other words, from hour to hour, between now and two to four weeks, we are going to move to a graph like this, with an extraordinary number of ill people, with symptoms,” said the Secretary, pointing to an image in the presentation he gave last Wednesday, March 11, to a public audience at the Senate’s Commission for Transparency and Consumer Protection.

Recently, the Rio de Janeiro state government created a contingency plan for the new coronavirus. The 18-page document is starting to be used as a way of avoiding the spread of this new virus. “The current document has the objective of systematizing the responsibility of the actions and procedures of the state sphere of the government, to support, in a complementary way, municipal managers with respect to the response to the coronavirus outbreak, in an anticipatory fashion, and also in the organization of flows to confront situations that fall outside the norm,” explains the government.

The Municipal Secretariat for Health has already said that health professionals in family clinics and municipal health centers have received training and are prepared to attend to suspected cases of Covid-19. The municipal health network increased by 150 the number of beds allocated to severe cases of coronavirus, turning the Ronaldo Gazolla Municipal Hospital, in Acari, into a point of reference for the treatment of Covid-19. The municipal secretary of health, Beatriz Busch, tried to calm down the population during a press conference. “There is no need to panic. The population should treat flu cases like normal, but if in doubt, they can seek out our family clinics and municipal health centers. If they have breathing difficulties or more severe symptoms, they can seek out emergency care units (UPAs) or emergency hospitals,” she said.

This article was written by Michel Silva, and published on March 19, 2020.
Translation provided by Cormac Whitney Low. This article originally appeared on Favela em Pauta. in #CoronavirusWatch, *Highlight, by Community Contributors, Translated by RioOnWatch