This photo-essay, from Jardim Edda in the South Zone of São Paulo, is the second in a series about the impact of the coronavirus pandemic on daily life in the favelas. The series is made possible through a partnership with the Behner Stiefel Center for Brazilian Studies at San Diego State University.

Coronavirus has arrived in Brazil and already there are cases in the country’s favelas and peripheries. The pandemic caused by the new coronavirus has pushed presidents of several countries to take financial relief measures, such as suspending payments for water and electricity, and enforcing confinement to mitigate the spread of the virus. In opposition to these efforts, the president of Brazil claims there is no reason to panic, and that it is necessary to return to normal for the good of the economy.

Applying common sense, many governors and mayors did not listen to the president and instead adhered to the quarantine, leaving only essential services operating in order to prevent large gatherings. This has been the case in the state of São Paulo.

In Jardim Edda, a peripheral area in the district of Grajaú in the South Zone of São Paulo, residents have already spent three weeks living in quarantine.

On the Edge of Reservoirs

Jardim Edda faces the challenging combination of a dense population and insufficient infrastructure. Grajaú is 92km2 and has a population of 360,000. In 2016, it ranked seventh on a list of the twenty districts with the lowest Human Development Index figures in São Paulo.

Grajaú grew without infrastructure or public policies, on the edge of the Billings and Guarapiranga reservoirs, which receive untreated sewage from the surrounding areas. Many of its neighborhoods do not have Basic Health Units (UBS), and thus overload health units in the neighborhoods of Jardim Icarai and Castro Alves. Furthermore, the area experiences high school dropout rates for children aged 7 to 14.

Neighborhoods in the Grajaú district, like Jardim Edda, were built on the margins of the Billings and Guarapiranga reservoirs, with sewage running straight into them.

In Jardim Edda, during the first week of quarantine (beginning March 16), the majority of non-essential stores were closed and street vendors were removed by the Metropolitan Civil Guard.

Even with businesses closed, there was plenty of vehicle movement in the streets. As a way to keep neighborhood businesses alive, some stores left messages advising customers to buy products through WhatsApp. Others were serving their customers from behind closed window bars. 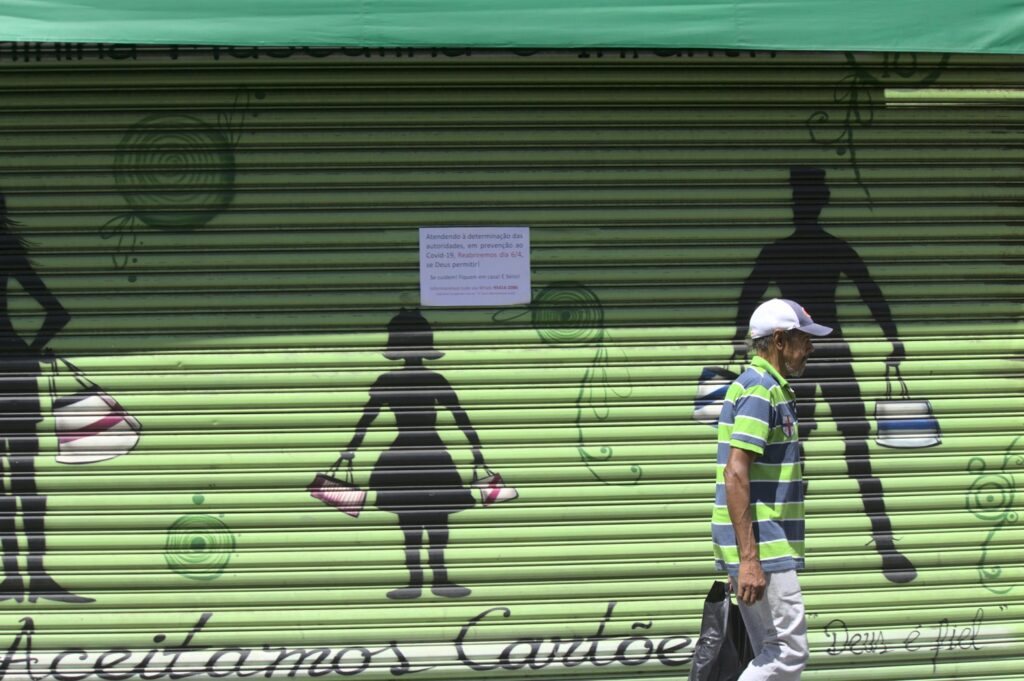 A closed business leaves information about the coronavirus on their door along with a WhatsApp contact to continue selling, even with doors closed.

In the second week of quarantine (March 23-29), a loudspeaker-equipped car circulated, announcing the risks of the disease in the neighborhood, advising people not to leave their houses and to avoid crowds, in addition to making recommendations for hand washing. 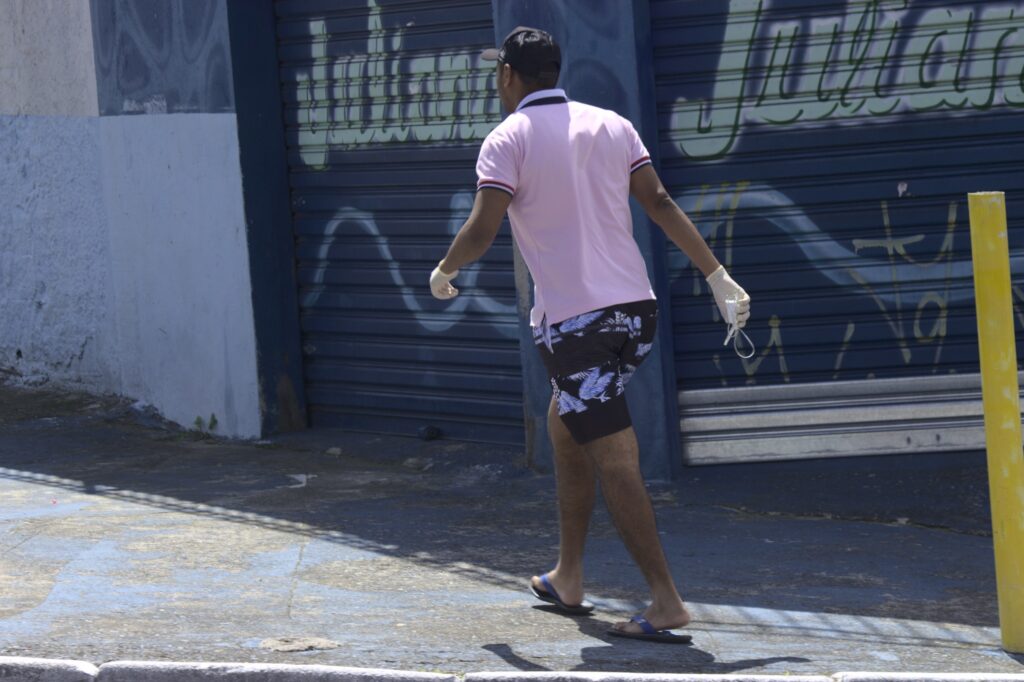 A resident protects himself by using gloves. 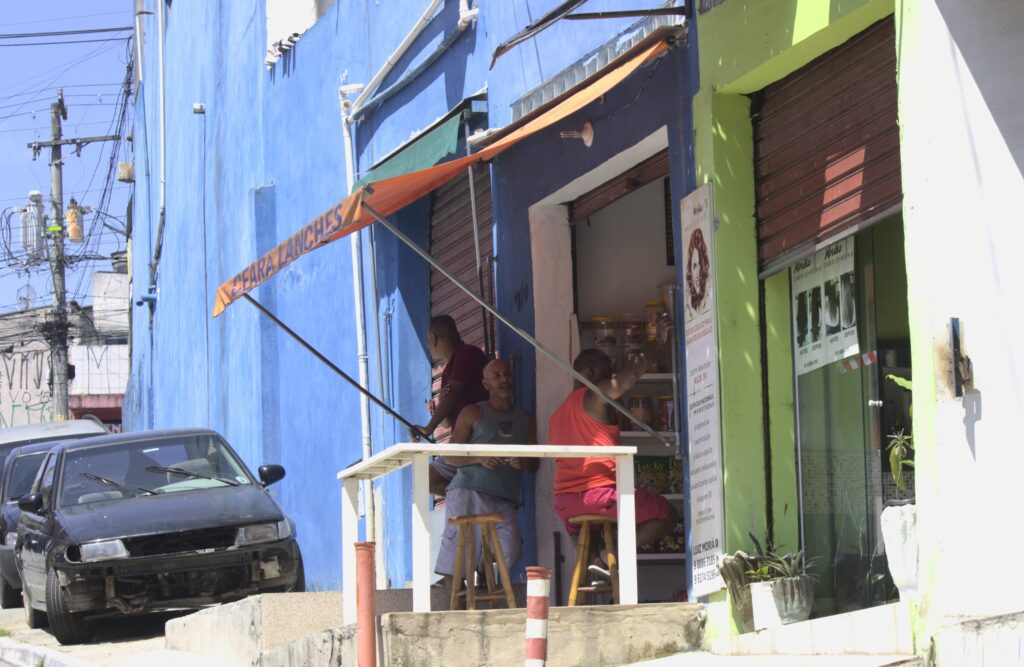 Meanwhile, some continue with normal life.

There was a long line of people waiting to buy propane for cooking, as the product had run out the previous afternoon. Gas canisters were being sold for R$70 (US$13.50). 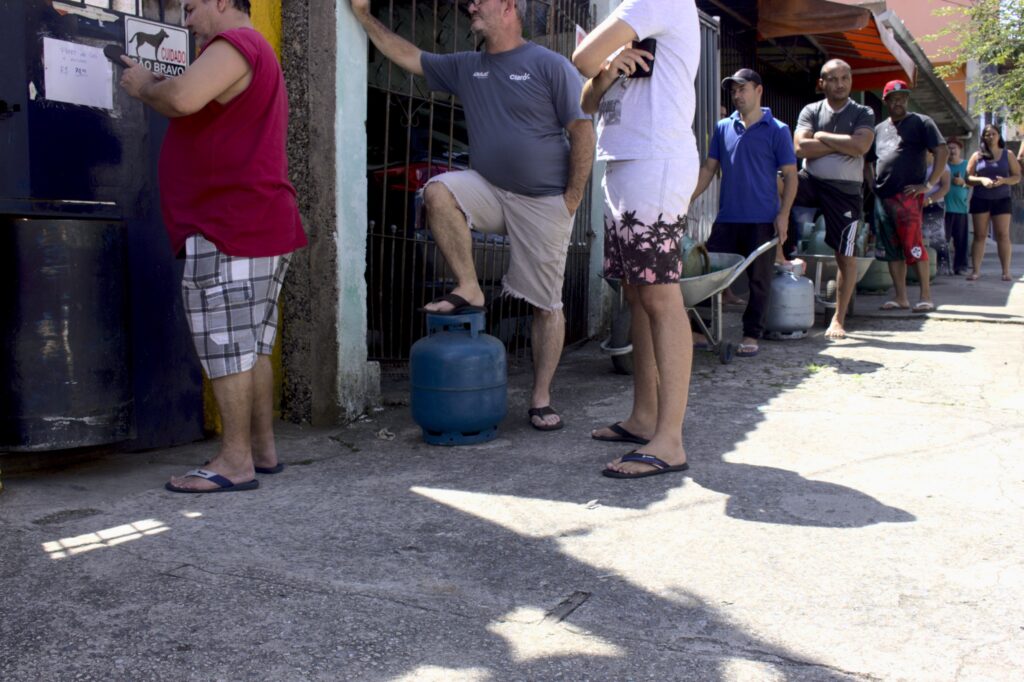 How to Isolate Without Space?

Another issue in the neighborhood is how to self isolate given the proximity of houses. A lack of space makes it difficult to follow the recommended distancing in order to avoid contamination.

Without a backyard, a woman hangs clothes in front of her house in Jardim Edda.

In the second week, the H1N1 influenza vaccination campaign began for people over 60 and health professionals. Emanuel, a resident of Mina Favela in Jardim Edda, jokes that he will go near the end of the campaign, because if those who are vaccinated first die, he will die last.

Dona Socorro, who is in an at-risk group due to heart disease, was instructed by her daughter not to be vaccinated. According to her daughter, the vaccine is a way for the government to kill the elderly. In addition to the lack of infrastructure and space, the periphery is experiencing a lack of reliable information: it is important to note that the H1N1 flu vaccine does not protect against coronavirus. However, the vaccine does protect a person from a bout of Covid-19 made worse by the flu. The problem with the lack of reliable information in the periphery is notorious. This leaves people at the mercy of fake news, which encourages them to continue with their routine without paying attention to the danger. 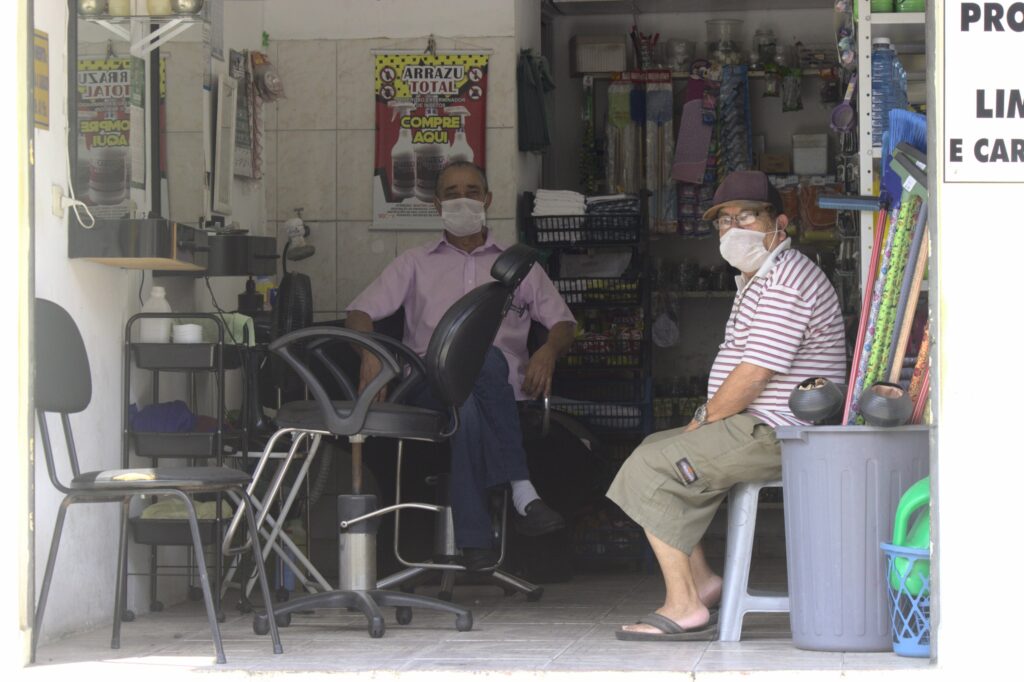 Residents out in the street, wearing masks.

Arriving at Grajaú station, a bus terminal integrated with line 9 of CPTM (São Paulo Metropolitan Trains Co.), we immediately noticed a homeless person sitting on a bench at the entrance. The man wore plastic gloves to protect himself from the virus and said he maintains hygiene by washing with water from the terminal bathroom.

A homeless person who lives close to Grajau Terminal shows his hands with gloves and reports he is using the station’s water to prevent Covid-19.

At the arrival platform at the bus station, we saw cleaning professionals dressed in protective clothing with masks, using rags and a liquid to sterilize the buses.

Unlike the first week, when there were no street vendors, by now we saw some makeshift stalls with cardboard boxes on the platforms. The owner of one of the stalls said she doesn’t believe in the disease, because according to her, “the rumor started after carnival.” However, when asked about what the objective of those behind the rumor would be, she didn’t know how to respond. She said the only income she has comes from sales from her stall and she is keeping hand sanitizer ready just in case. 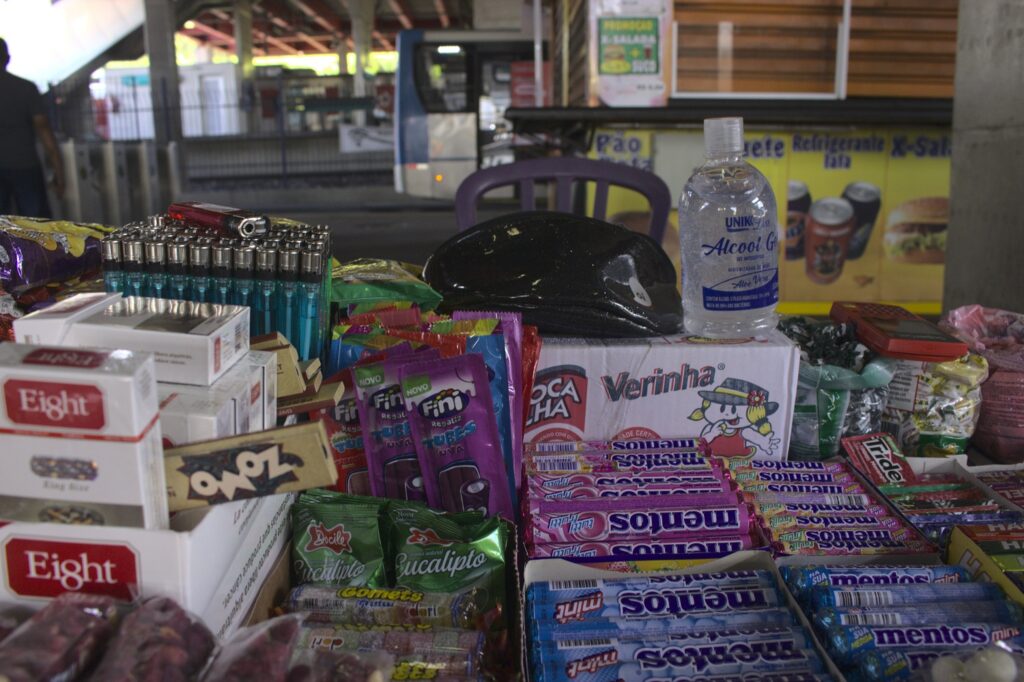 Even without believing in the pandemic, the owner of this stand keeps alcohol gel on hand to prevent infection.

After intensified rhetoric from the president claiming there was no need for panic and that it was necessary to return to normal, on the third week of quarantine (beginning March 30), the scene was very different, with many more businesses open, an increase in the number of cars on the street, and people walking around normally. This shot was taken on Grajaú’s central avenue in São Paulo.

People going about life as normal, businesses open, buses full, and plenty of cars on the streets.

Without Basic Income, Prevention is Impossible

As we saw above in this photo-essay, an effort must be made to guarantee a basic income for all in this period of public calamity. A task force to disseminate correct and vital information is also necessary so that we can return to our normal lives as soon as possible, so we can ride bikes on the street without fear.

Antonia Sousa, 32, is originally from the Brazilian state of Ceará and has lived in Jardim Edda in the Grajaú district in the South Zone of São Paulo for 18 years. She works as a freelance photographer and is a technician in photographic processes for Senac. In 2019, she won honorable mention at the VII Photography Salon of Ribeirão Preto for her piece entitled “Trabalhadores” (Workers). Her work is available online via her portfolio and on her Instagram profile.

This article was written by Antonia Sousa, and published on April 15, 2020.
Translation provided by The Behner Stiefel Center for Brazilian Studies. in #CoronavirusWatch, *Highlight, by Community Contributors, Photo-Essays, Violations