This is Part 2 of a three-part series on the History of Favela Upgrades in Rio. Click for Part 1 and Part 3. 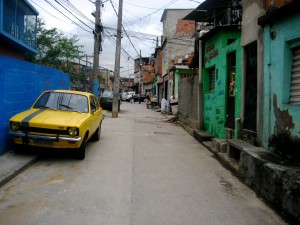 If you see paved streets in a favela, such as these in Acari, they may well have been installed by the Favela-Bairro upgrading program.

Walk into a favela in Rio today and you may see railings and poured concrete staircases amid the more organic alleyways and not-quite-symmetrical homes. Unless there are workers scrambling around—or taking a coffee break—in blue jumpsuits and hard hats, these infrastructure features were likely installed by the Favela-Bairro (Favela-to-Neighborhood) upgrading program of 1994 to 2008.

Before Favela-Bairro, infrastructure upgrades in Rio favelas had led to a total of 200,000 meters of sewerage lines installed and 31 neighborhood community health programs established. The new Brazilian Constitution of 1988 established the right to adverse possession, to organize freely and right to come and go. But it was Rio de Janeiro’s 1992 master plan, the Plano Diretor, that first stated outright in Articles 148 and 151 the goal of “integrating the favelas into the formal city” and “preserving their local character.” This was a far cry from the “favela as aberration” language of Rio’s 1937 Building Code. 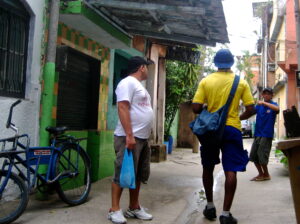 A mail route in Acari. The Favela-Bairro program brought land titles and street addresses to many favela residents.

For funding, Maia solicited money from the Inter-American Development Bank. He signed a contract in 1995 with the Bank providing US$180 million, to be matched by US$120 million equivalent from the Rio government, for the first stage of the project. An identical budget was passed for the second stage of the project in 2000.

To select which favelas would receive the first upgrades, planners organized all favelas in the city according to size: mid-range, large, and small. Mid-range communities of five hunded to 2,500 homes, which together held 40% of the city’s favela residents, would be the first beneficiaries. These communities were then ranked by the difficulty of doing construction there. The 40 most feasible sites were chosen, and of those, 16 were selected by the mayor and sub-mayors to receive the first projects. For specific upgrade designs, there was an open competition among private architecture firms, and the government worked with the Brazilian Institute of Architects to select the winners.

By the end of the first stage of the Favela-Bairro program, 38 favelas had received upgrades: this included favelas benefitted by shootoff programs Bairrinho, for communities with fewer than 500 homes, and Grandes Favelas, for communities with over 2,500 homes. The second phase of Favela-Bairro, from 2000-2005, began during Mayor Luiz Paulo Conde’s administration (1997-2001) and continued into César Maia’s second term (2001-2005), urbanizing 62 more favelas and 24 informal subdivisions, or loteamentos irregulares. Upgrading in the second phase of the program expanded to include childcare centers, computer centers, training in hygiene and community development, and some land titling.

Early evaluations of the Favela-Bairro program praised its innovative nature. In 2005, the headquarters of the Inter-American Development Bank held a ten-year anniversary of the program and called it “the most ambitious squatter upgrading program in the world.” Favela historian and Catholic University of Rio (PUC-Rio) Sociology Department Coordinator Marcelo Burgos wrote in 2005 that he had “high hopes the program would cause a revitalization and capacity-building of political organizing in the favelas,”adding that “the fight for rights had found an important ally in the Favela-Bairro program.” Certainly Favela-Bairro was an ideological leap forward from previous state interventions in favelas, and now that a few more years have gone by it is possible to look more specifically at its results on the ground today.

A Favela-Bairro Site in the North Zone 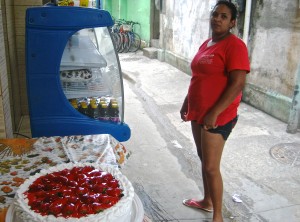 Prominent Favela-Bairro upgrades in Acari included the pavement of roads and the installation of drainage ditches in their centers.

Between Avenida Brasil and the Padre Lima River, an hour from Rio’s South Zone by metro, 8,500 homes comprise the favela of Acari. The former site of a sugar plantation, Acari was settled as a favela after Avenida Brazil was opened through the North Zone in 1945; it is now one of dozens of favelas that line the highway on either side. Like many North Zone favelas, it is flat. Cars drive down the roads. The mail arrives at people’s doorsteps. But Acari certainly qualifies as a favela and, as measured in 2000, it is the area with the lowest UN Human Development Index in the city of Rio.

As urbanization goes, Acari has lived through several different iterations of upgrading programs. The first was a smaller, independent initiative organized by the rector of PUC-Rio in 1980 that installed some pavement and sewerage infrastructure. In 1996 further sewerage was installed by the national program PROSANEAR.  In 2006, the second phase of the Favela-Bairro program came to Acari to pave more roads, install more sewers, and reinforce the walls of drainage canals.

Deley de Acari, a public school cultural programming director who has lived in Acari for the last twenty of his 74 years, said these urbanization programs brought necessary services residents deserved after paying sales taxes for decades. In his eyes, the urban design of favelas is unique and beautiful, reminiscent of old, high-density European cities in Portugal and Italy, and reinforcing the roads was the right step to preserve that design. 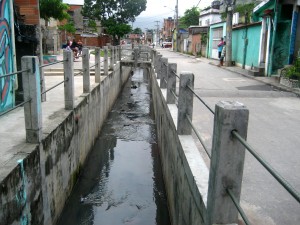 This canal in Acari has been redone by the Favela-Bairro program four times.

Deley’s main comment about the urbanization programs, however, was that the quality of public works was consistently low enough that several times, their main value added was that of paving over deteriorating upgrades from the past. One canal in Acari received new concrete siding and rails no fewer than four times. “It’s not because the workers are incompetent,” said Da Cunha. “It has to do with the quality of materials used.” In some streets, because Favela-Bairro workers did not scrape away old pavement before paving again a second or third time, street level rises inches above the floors of homes on either side. This means that when it rains, water runs into homes instead of into the sewers in the middle of the road.

Further academic sholarship on the Favela-Bairro program—for example, Bruno Alves de França’s survey of the use and longevity of Favela-Bairro upgrades in Praia da Rose and Sapucaia and Janice Perlman’s 2010 longitudinal study of residents of four different favelas in Rio—tends to point to the same successes and shortcomings. Favela-Bairro upgrades indeed worked away at some of the stigmas that historically surround favelas, treating them instead as deserving of public works on a large scale. But this scholarship also points to many instances of works deteriorating quickly due to poor materials and poor maintenance. 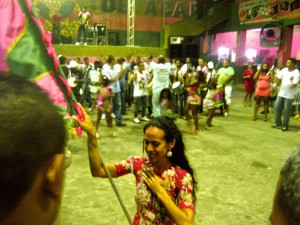 Da Cunha says that after urbanization programs, Acari remains a favela rather than a “bairro,” or formal neighborhood. “A favela is not the physical form of a neighborhood,” he argues, “but rather the people who live there”—where they come from, and especially how they socialize and relate to each other. Da Cunha told the story of Cidade Alta, one of many housing projects in the city to which a favela population was relocated. He said as soon as it was populated with favela residents, Cidade Alta stopped being a condominium and started being a favela. He emphasized this is hardly a bad thing, pointing to cultural elements of favela life that have become famous throughout the city. Here in Acari, for example, there is a monumentous Escola de Samba (samba school) rehearsal and baile funk (funk party) every weekend.  “Culturally, you know,” he added, “we have a favelada city.”

On Participation and Progress

Although the constitution of the Favela-Bairro program stipulated the “maximum participation possible” by communities in planning their upgrades, the program’s implementation in Acari does not trigger in Da Cunha memories of public participation. He notes that public participation in the community in general is robust—the local crèche was built by mothers from the community, there are several local cultural organizations for young people, and he dreams of participatory budgeting for Acari in the future. But Favela-Bairro upgrades were largely administered from the top down. 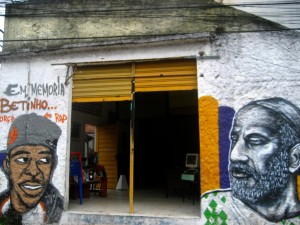 The spirit of public improvement in Acari is to be found in this resident-constructed cultural center, with a portrait of Deley painted on the right.

By 2008 Favela-Bairro had reached 168 favelas and loteamentos across the city . In 2005, a quantitative Inter-American Development Bank study of 37 communities that received the first phase of the Favela-Bairro program showed that there was a significant increase in water and sewer access in served communities when compared to unserved ones, with a higher impact on the poorer favelas that were served.  The study found that Favela-Bairro’s health and sanitation elements had no effect on mortality from vector-born diseases, however, nor did Favela-Bairro make rent rise faster in the communities than it would have otherwise considering the increase in rent in the surrounding neighborhoods. The study also made the important point that Favela-Bairro aimed to address the results of the city’s lack of affordable housing, rather than the conditions that forced people to live informally in the first place. This issue would be addressed more in the future by the addition of further social services to upgrading programs.

In the words of Janice Perlman,

Favela-Bairro was a bold leap forward but not ‘the best.’ There are no ‘best practices,’ only practices that are better than others at a particular time and place. Once an innovative idea reaches implementation and then becomes routinized, its internal contradictions present new challenges to be addressed.

Born through a combination of national and international political pressure and a growing favela voting bloc, the Favela-Bairro program did indeed represent the routinization of on-site upgrading as the Rio government’s official policy toward favelas, and the addition of social services in its later phase was an indication of trends in upgrading programs to come. The next program to enter the favelas on a large scale, 2007’s national Growth Acceleration Program (Programa de Aceleração de Crescimento, or PAC), provided for over US$300 billion-worth of infrastructure upgrades and social assistance programs to low-income communities across the country.

As on-site upgrading became the consensus government policy toward favelas through the 1990s and 2000s, evaluating this policy has required a shift from looking not only at these programs’ intentions, but also at their implementation. “I would hope that construction for a favela upgrading program would occur with the same quality of materials, and with the same urgency of timeline,” said Da Cunha in Acari, “as a public work in another part of the city.” By the late 2000s this was still not the case. A trickle of funding continued for delayed Favela-Bairro projects from 2005 to 2008, with many contractors abandoning projects because of difficult working conditions. Soon afterward, however, these backlogged projects would get a new source of funding and a new name, that of Morar Carioca.

The 3rd and final installment in this 3-part series on the history of favela upgrades focuses on the Morar Carioca program of 2010-Present. Click for Part 3.

Soares, Fabio and Yuri. “The Socio-Economic Impact of Favela-Bairro: What do the Data Say?” Washington, D.C.: Inter-American Development Bank Office of Evaluation and Oversight, 2005.

This article was written by Catherine Osborn, and published on November 26, 2012.
in by International Observers, Policies, Research & Analysis, Solutions, Understanding Rio