In Brazil, due to dramatically insufficient testing and delays in the release of test results, the underreporting of Covid-19 cases and deaths is enormous. The high number of deaths in relation to the number of confirmed cases of Covid-19 and the spike in cases of Severe Acute Respiratory Syndrome (SARS), in addition to expansions in morgue capacity in Rio de Janeiro hospitals are all evidence of this phenomenon.

In April, specialists estimated that for each confirmed Covid-19 death, there could be at least nine that have gone unreported. The actual number of Covid-19 cases in Brazil could be up to 15 times higher than declared. Brazil now has the highest transmission rate in the world. In Rio favelas, underreporting is even worse. The number of deaths in proportion to confirmed cases is twice that of the rest of the city.

If initially the effects of the disease were felt first in the city’s wealthy neighborhoods, coronavirus is now crushing favelas and peripheries. Official data, however, do not accurately reflect this reality.

Vila Kennedy is one of the Rio neighborhoods leading the ranks of underreporting of Covid-19 deaths.

According to our data survey, 16 deaths in the community have had Covid-19 as cause of death.

According to the official map of @Prefeitura_Rio and @GovRJ, the neighborhood has 1 death due to Covid-19

Even in the realm of data collection, favela organizers are left to fill gaps left by the State. Community journalists from various favelas are developing their own digital dashboards to accompany the evolution of cases in Rio favelas and provide more realistic data. The online newspaper Voz das Comunidades, for example, has created the Covid-19 Favelas dashboard, using public and community data to show the number of confirmed cases and deaths by community and their evolution over time.

Until this week, the dashboard only included City data. However, data shared by various Family Health Clinics—in Complexo do Alemão, Manguinhos, Jacarezinho, Rocinha, Pavão-Pavãozinho and Cantagalo—revealed that health posts published confirmed case and death figures much more quickly than the City, and that they possessed more accurate coverage of the territory.

For example, the Zilda Arns Family Clinic, which attends to a portion of the Complexo do Alemão favelas, created its own publicly available dashboard, updated daily, to monitor not only confirmed cases and deaths, but also suspected cases with flu-like symptoms, SARS cases, number of interned, and number of recovered. It also contains more specific data by age, sex, symptom, and neighborhood of residence.

The Covid-19 Zilda Arns Family Clinic monitoring dashboard allows for a more precise view of the reality of coronavirus spreading in the territory of Alemão. On May 12, while the City reported five cases and zero deaths in Complexo do Alemão, Zilda Arns had already identified 27 confirmed cases, 10 deaths, and 1505 suspected cases.

Two other communities have their own health post monitoring dashboards: Rocinha, which also provides data on the number of tests awaiting results and number of negative test results on its Covid-19 Rocinha monitoring dashboard; and Manguinhos, which has included a map identifying the origins of confirmed cases and deaths within the neighborhood in its Manguinhos—Covid-19 situation dashboard.

The Maré Mobilization Front has also created a monitoring dashboard as part of the #CoronaNasFavelas campaign. The dashboard presents the evolution of confirmed cases and deaths in different favelas in Rio, and features a comparative graph on State and Municipal data in Rio de Janeiro as well as international data from the United States, Italy, and China. Their dashboard is based on City data as well, but also includes Covid-19 cases in neighborhoods that Voz das Comunidades does not count, including Vigário Geral, Parada de Lucas, and Caju. According to the Maré Mobilization Front dashboard, Covid-19 is already present in 16 favelas, with a total of 432 confirmed cases and 135 deaths as of May 13.

These disparities in data occur due to questions of which neighborhoods—defined by the City’s dashboard—are categorized as favelas. This is because the territorial limits of neighborhoods used in the City’s data collection rarely correspond to those of favelas.

Despite Complexo do Alemão being recognized as a neighborhood since 1993, the majority of the region’s CEPs [zip codes] still correspond to the neighborhoods of which Alemão is a part, such as Inhaúma, Ramos, Bonsucesso, and Olaria.

As such, on the City’s dashboard, cases end up being divided between these neighborhoods, rather than unified under Complexo do Alemão.

This reveals the scale of the underreporting of cases in Rio favelas. Many favelas are part of larger neighborhoods, and thus their cases may be subsumed rather than cited specifically: they are diluted in the totals of the neighborhoods where they are located.

Anastásio Amorim, 89 years old, community leader from the favela of Baixa do Sapateiro [Maré], died of pneumonia. His death did not enter into statistics of suspected Covid-19 deaths, just as many others did not, on account of a lack of testing. #COVID19NasFavelas

For example, the favela of Rio das Pedras is part of the neighborhood of Jacarepaguá (133 cases) and Itanhangá (33 cases). The City does not count the number of confirmed cases in Rio das Pedras, therefore, as belonging to the favela. In the same way, the neighborhoods of Pavuna (70 cases) and Costa Barros (27 cases) contain various favelas that do not receive their own case numbers. Morro da Providência (10 cases), is located inside the neighborhood of Gamboa, in the downtown Centro area. (All data from May 12.)

Reports from various areas of the city demonstrate this same phenomenon. Whether it be data from the City or from the community dashboards listed above, all sources address only larger favelas and groupings of favelas. This leaves the large majority of the favelas of Rio de Janeiro without any public data specific to their territories. RioOnWatch has learned of cases and deaths, for example, in the small favelas of Pica-Pau in Cordovil, Vila Parque da Cidade, Mata Machado, Tijuaçu, Asa Branca, and Tuiuti. Even in larger favelas such as Borel, Complexo da Penha, and Gardênia Azul, we have news of cases not listed in the lists and dashboards above. And within a number of the communities listed in this article, we have heard of many more deaths than those officially counted on the dashboards. Other media sites have also reported on yet more communities affected, such as Vilar Carioca and the favela complexes of São Carlos and Pedreira. We can conclude, therefore, that the number of favelas with cases already amounts to a sizable portion of favela territories across the city.

The City’s Rio Covid-19 dashboard does not, therefore, attend to the urgent need for monitoring Covid-19 cases specific to the favelas of Rio de Janeiro, because the government uses territorial limitations that do not correspond to those of the favelas. As a result, there exists a dearth of data on the reality of the pandemic in the favelas, giving favela activists reason to believe that the situation in favelas is much more dire than portrayed in official data. 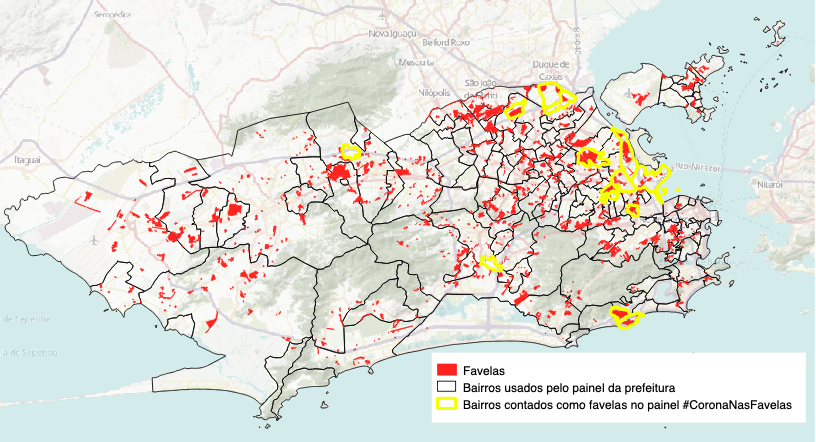 Health post data and community-compiled data demonstrate that the City is unconcerned with monitoring cases in the favelas, even though these territories are at greatest risk from the pandemic. According to a post from the Facebook page of community media outlet Voz da Vila Kennedy, there have been at least 16 Covid-19 deaths in Vila Kennedy; and according to the Zilda Arns dashboard, there have already been 10 deaths in Complexo do Alemão, different from the five counted by the City dashboard. Hiding the scale of the crisis of the pandemic in the favelas encourages popular belief in the insidious rhetoric of President Jair Bolsonaro, resulting in the non-adhesion of exactly Brazil’s most vulnerable communities—favelas—to preventative measures such as social distancing, on top of the difficulties they already have.

Minimizing the problem also denies the recognition of the need for concrete and specific public policies directed toward the situation in the favelas. At a moment when municipal public health units have confirmed that authorities are not revealing the totality of cases in the favelas, it can be argued that this lack of transparency amounts to a cruel and negligent State policy for the favelas.

This situation does not only apply to Rio. It is difficult to find exact numbers in peripheral areas elsewhere in the country, such as in São Paulo. As a result, it is impossible to know how many cases of coronavirus infection and death truly exist in the favelas of Brazil.

Official data published by the municipal, state, and federal governments are often the only source to which media and the public at large turn to evaluate and analyze the situation, to inform the population about the pandemic in the favelas, and to demand and monitor solutions from public authorities. Without these data, we have no effective basis for the development and implementation of public policies or with which to hold public authorities accountable.

The only reason the scale of the pandemic in the favelas is visible is that favela initiatives such as those cited above are growing by the day.

Favelas with Confirmed Cases of Covid-19

If you are aware of suspected or confirmed cases in favelas not listed above, please let us know at WhatsApp 99832-5575 or email contato@rioonwatch.org.br.