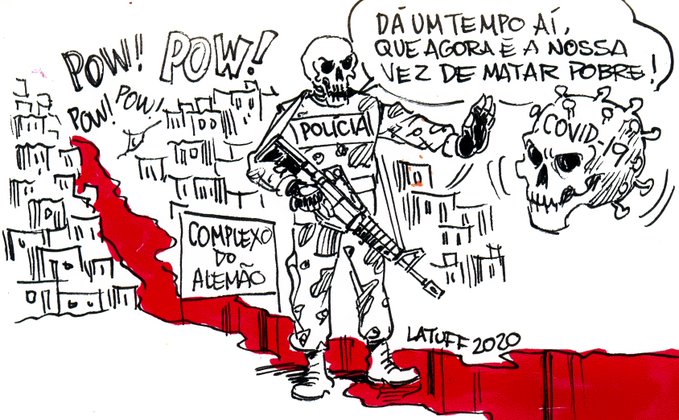 May 15, Complexo do Alemão, Rio de Janeiro. Residents manually carried the five corpses, down the alleyways to the entrance of the favela of Nova Brasilia. Laid out on cardboard and covered with bedsheets, the bodies would sit in the rain until friends and family came to identify them. As families across Brazil shoulder an accelerating Covid-19 death toll, Rio’s favelas continue to lose lives, not just to the pandemic, but to another, more familiar danger: the “war on drugs.”

The police operation began at 6am as members of Rio’s SWAT-like special operations battalion (BOPE) and the Civil Police’s special resource team (Core) roared into the Alemão neighborhoods Fazendinha, Alvorada, Loteamento, and Nova Brasilia in armored tanks called caveirões, or “big skulls.” “We woke up to the sound of gunshots and grenades,” said one Nova Brasilia resident who asked not to be identified. “They came in destroying everything. Here in my doorway, a car was hit.”

Within minutes, residents would share audio clips of machine gun fire and explosions on WhatsApp, filming police from their windows, sending reports of torture and knife-killings to the local human rights media collective Coletivo Papo Reto—an ever-growing practice among favela residents during police operations, a form of protection from police abuse and human rights violations.

The online news site Voz das Comunidades, also based out of Complexo do Alemão, would publish resident videos of destroyed cars, torn-apart houses, blown transformers, severed water piping, and perforated water tanks; Voz videos shared on Twitter showed more than 80 bullet capsules in a single alleyway. Then came the death toll. By noon, local press had confirmed at least six dead from the operation. The number would soon rise to thirteen.

“They pushed forward, shooting into the alleys. Everything is destroyed, all the houses shot up with bullet holes. Everyone was panicking. You can’t put into words what we went through. It was really a war scene. Here, the feeling is that the only reason they don’t shoot a missile at us is that we’re in the middle of a [state] capital city. But that’s the only difference between here and other places [of war],” said another Nova Brasilia resident, also anonymously, sobbing, her voice shaking over the phone.

“The war kills many, but the post-firefight leaves irreversible damage, and there is no easy cure for this. Panic attacks, PTSD, depression, you can end up dying even without the bullet,” she added. “I’m not kidding around. We’ve been living through this business of [police] operation followed by operation since 2013. It had stopped, but now, in the middle of a pandemic, this massacre comes out of nowhere!”

In the favela of Fazendinha, also in Complexo do Alemão, another resident, who also requested anonymity, said that police wore full-head masks and operated without wearing official identification. She added that a number of police had searched residents’ cell phones for information related to the operation, checking messages and photos shared to WhatsApp groups.

According to other residents, the only reason there weren’t more deaths was that non-essential businesses had closed their doors Thursday (May 14) owing to a municipal decree to combat Covid-19. And essential businesses like pharmacies and supermarkets in the area would usually open at 7am, but remained closed once the operation began at 6am.

On top of the deaths, according to Voz das Comunidades, houses were invaded and residents sent messages reporting human rights violations occurring in the favela’s alleys. Later, the major avenues of Itararé and Itaoca were closed for the bodies of the deceased to be removed.

“They Don’t Even Send the Most Basic Things. But the Police, They’ll Send Them.” 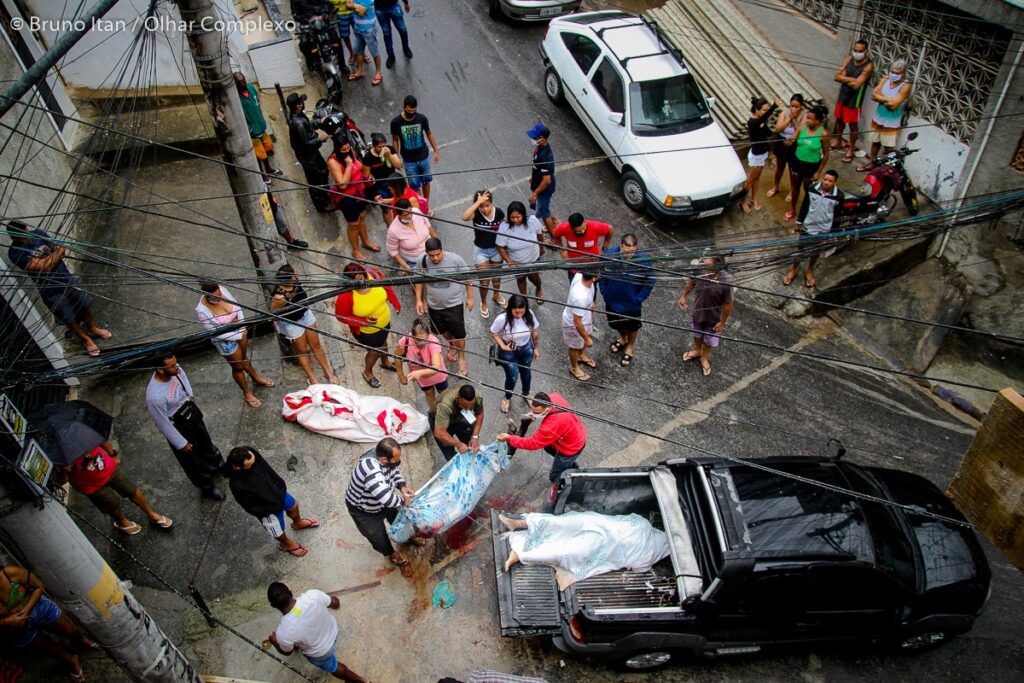 Residents carry the bodies of the dead in Nova Brasilia. Photo by Bruno Itan, Olhar do Complexo

These were the words of activist and artist Mariluce Mariá de Souza, who was infuriated by the police operation. “In the middle of a pandemic, with people already panicking for lack of food and medical assistance and contact with other people, we get a shootout?” For de Souza, the government should have sent healthcare professionals to improve attendance at the region’s Urgent Care Unit (UPA) and Family Health Clinic, masks, and the food parcels that had been promised to the population. Instead, it sent bullets.

“They don’t even send the most basic things. But the police, they’ll send them. Gunshots get here. The State needs to concern itself with saving lives and not exposing us to even more death,” said Mariá, founder of the Favela Art project.

According to de Souza, people are stressed, living through a process of psychological torture owing to the quantity of information in circulation, both true and false, about Covid-19. “This confuses people, who don’t know how to act. It’s emotional torture and now this operation happens? This shouldn’t be happening right now. When the State wants to, it arrests higher-up criminals without firing a single shot. Why is it that here in the favela they have to come in shooting in the middle of a pandemic?” she asked.

“An operation to kill 13 people and to apprehend 8 guns? And what of the price of these shots fired?” de Souza pointed out. “Were there shots from both sides? Yes. But what matters for us is that we pay our taxes to the State [not the criminals]. It is the State that is supposed to be obligated to fight for our safety.”

The War Machine Continues Despite Pandemic

Favelas around the city woke to the same chaos. According to the online monitoring platform Fogo Cruzado, Rio police conducted operations in at least three other favelas the same morning: Cachoeira Grande, in Complexo do Lins; Morro do Engenho, in Engenho da Rainha; and Morro do São Carlos, in Estácio, all in the North Zone. Police “actions” turned violent in several others, including Santa Marta, Morro da Mangueira, and City of God.

“Early this morning around 5:30 or 6:00, the caveirão had already started rolling through the favela, and the gunfire started,” said community organizer Ingrid Siss, resident of City of God, in the city’s West Zone.

Siss, who coordinates the community project Casa Dona Amelia, explained that she had heard news that the government had sent police to try to close local businesses in an effort to reduce the number of people out in the street. Except that’s not what happened. “We see that the State [supposedly], in order to reduce deaths by Covid-19, it spills blood through the violent mortality of its actions. Yesterday we had hours of shootouts in different areas of City of God.”

As a trained psychologist, Siss added that the violence of such police operations can contribute to a variety of mental health issues. Aside from anxiety attacks, depression, and a range of pathological conditions, said Siss, it may also limit residents’ ability to protect themselves from coronavirus. “When the State maintains its violent action in these territories, it reinforces the idea that nothing has changed, and that there is no space for the creation of a new routine of protection and care,” she explained. 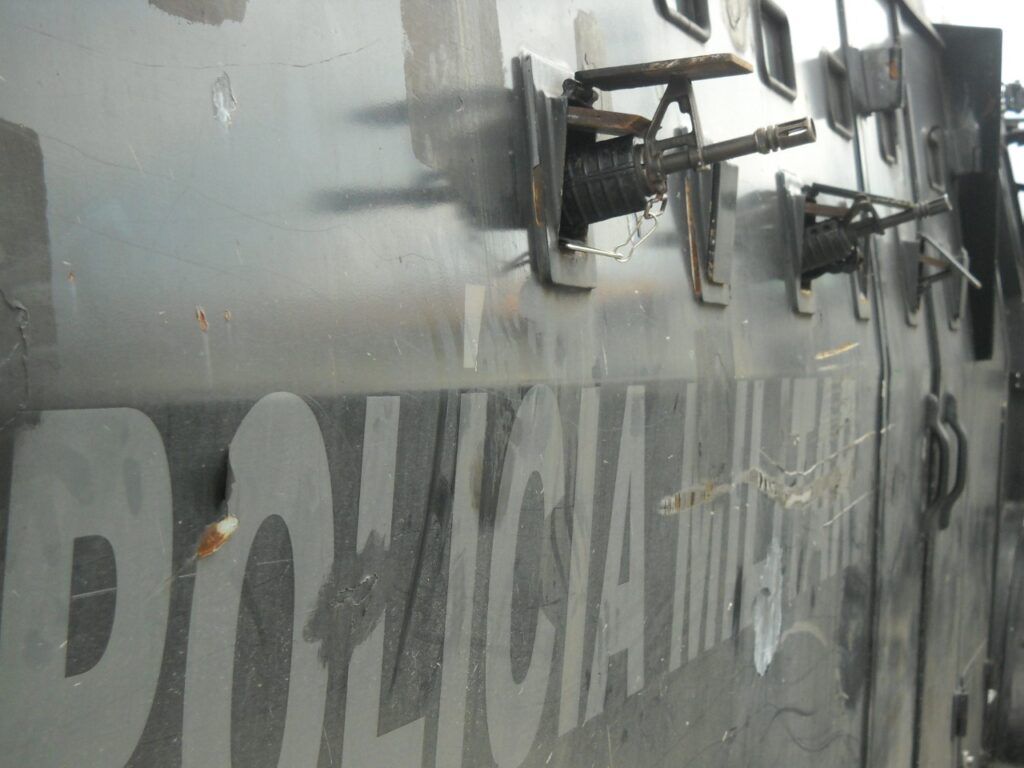 In the second half of March, as RioOnWatch reported, Rio de Janeiro saw a steep drop in the number of police operations in line with government-mandated quarantine measures. As social distancing loosened, however, operations rebounded, putting April’s figures on par with January and February 2020. Pablo Nunes, research coordinator at the Network of Security Observatories, said it was too soon to tell what May would bring, but called the operation in Alemão “completely abusive, excessive, and above all, violent.” Later, the Network sent out a note on WhatsApp denouncing the operation as “a shocking moment in the history of public security in Rio de Janeiro.”

“What we saw today, in Complexo do Alemão, is more of the same routine: the Military Police close off entrances, terrorize residents, leave a trail of death and bodies exposed in the alleys,” State Deputy Dani Monteiro wrote to RioOnWatch. Monteiro, born in the São Carlos favela, recalled the governor’s violent public security policies throughout 2019: “The necropolitics of Wilson Witzel, we will not forget. It is that which proclaims that the police should aim at ‘their stupid little heads.’ The ‘war on drugs’ has been the pretext for which the State operates in this society, and the result is the genocide of black youth.”

“It is unacceptable that this type of operation takes place during a pandemic, in which the poorest are made even more vulnerable,” said Monteiro, who last week presented a bill to the State Legislative Assembly (Alerj) proposing the suspension of police operations for the duration of quarantine.

The Alerj Human Rights Commission, headed by State Deputy Renata Souza, is now in the process of analyzing the audios and videos of violations received from Alemão residents. “The guarantee of human rights of the residents of favelas and peripheries must exist with or without the pandemic,” said Souza, a native of the favelas of Maré.

“It is cruel to have to note that there is a lack of water, basic sanitation, food, but no lack of police operations of this type. The government should enter [the favelas] with health professionals, food parcels, and potable water for residents,” said the Deputy. “This option for a policy of confrontation during a full-blown pandemic is regrettable. But they continue investing in an irrational policy that only creates insecurity and no concrete result for the reduction of violence, unless the true goal is to only to leave bodies on the ground.”

A History of Massacres in Complexo do Alemão

Complexo do Alemão has experienced other massacres. On October 18, 1994, 13 were killed in a Civil Police invasion in the favela of Nova Brasilia. One month after the massacre, “Operation Rio” began, with the entrance of the armed forces as part of the war on drugs. On May 8, 1995, less than a year later, history repeated itself. Again, 13 died in a massacre in Nova Brasilia. The majority of victims showed evidence of bullet wounds to the thorax and head. 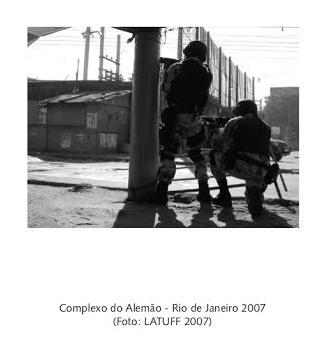 In 2007, in the middle of the Panamerican Games, National Security Forces besieged Complexo do Alemão for five months. The violence reached a peak during an operation on June 27, in which official figures indicate 19 were killed by the police. Each victim was shot an average of four times.

“We have already been through other situations. I remember the massacre of 2007, the one the people here say was the Chacina do Tiro ao Pato [target practice massacre], because the police would say ‘go ahead, you can pass,’ and then they would shoot. They shot people even if they had given themselves up,” recalled a resident from the Loteamento area of Complexo do Alemão, who, for security concerns, asked not to be identified.

For the resident, the confrontation this May 15 was even worse. “The scene we saw today, and are still living through, was something even more terrifying than a massacre, because a massacre affects the person that dies and that person’s family members. We end up isolated. But what happened today shook everyone, because it was so explicit. Many involved in the situation who had nothing to do with it. It was torture to hear it,” she said.

This article was written by Edmund Ruge, Tatiana Lima, and published on May 17, 2020.
in #CoronavirusWatch, *Highlight, Policies, Violations