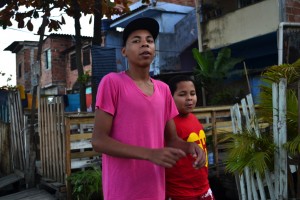 Vila União de Curicica houses many young residents born there over the course of the community’s 26-year history.

In late 2011, representatives of the 26-year old community were asked to attend a public audience at Rio’s City Council where they were told that part of the community would be removed due to its location in the future path of the TransOlímpica highway and BRT line. The other half of the community would receive upgrades from the municipal Morar Carioca program as one of eight communities in Curicica, part of Agrupamento 26, together with Asa Branca, Abadiana, Curicica II, Santa Maura, Vila Calmete, Vila Pitimbu, and Virgolândia. 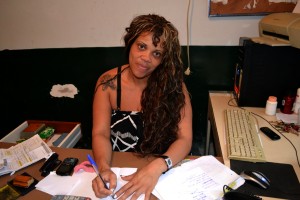 President Vânia Neri of the Vila União de Curirica Residents Association is the point of contact for residents curious about the Prefeitura’s latest announcement.

For over six months, president Vânia de Jesus Júlio Neri of the Vila União de Curicica Residents’ Association tried to make contact with a city representative to find out which part of the community would be removed. Then, in September 2012, representatives of the nonprofit iBase, which has been contracted by the municipal government to conduct participatory planning activities in Morar Carioca communities, requested permission to enter Vila União de Curicica. Permission was granted. Researchers from iBase went door-to-door, asking residents about their desires for the community and their preferences for the future locations of public works such as parks.

After two weeks, the surveying stopped. At this point Vânia contacted a representative of Rio’s Housing Secretariat (SMH) who arranged a meeting with Vânia and past Residents Association President Regina Sônia Gomes Baptista, known as Sônia, at the Secretariat’s Vila Pitimbu office. On November 13th, Vânia and Sonia were told that, in fact, the entire community was going to be removed. It was because of this that the Morar Carioca activities had ended. 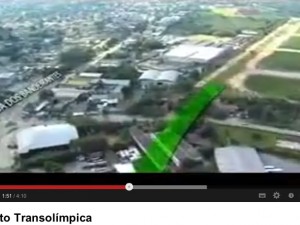 A 2011 city-produced promotional video for TransOlímpica shows the planned highway (green) skirting to the south of the Curicica communities, which lie on the other side of Estrada dos Banderantes.

On November 17th, Vânia organized a meeting with community residents to tell them to stop progress on small-scale construction projects underway on their homes so as not to lose progress and money if the homes were to be demolished. On December 6th, there was a meeting held with community residents and a representative of the sub-mayor of Jacarepaguá at which Vânia voiced her hopes for the situation: that at the very least part or all of the community could remain in its current location and the TransOlímpica plans be maintained to the original plan. In the second-best scenario, that residents would be rehoused in a nearby area where there are no homes currently, such as an open field adjacent to the community Quinze or adjacent to the community Colonia Juliano Morreira. “People have roots here,” said Vania, referring to the importance of employment and family networks in the Jacarepaguá area. 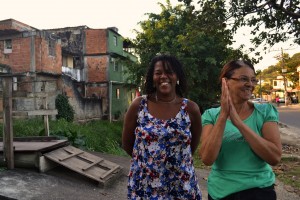 Founding President of Vila União de Curicica Residents Association Sônia Gomes Baptista (right) has overseen a variety of collective building projects over the years. She worries about losing the product of this labor and the spirit of the community.

Vânia’s fear is that families will be relocated to public housing in the far West Zone of the city, Administrative Region 5 (AP 5), where in 2010 the director of SMH advised against building public housing because it was a “região dormitório” devoid of of nearby employment, and that “to encourage the production of social housing in this region would only deepen the city’s socio-spatial segregation and lead to the formation of more ghettos of poverty.” Since then, dozens of subsidized condominiums have sprung up in the AP5 neighborhoods of Bangu, Campo Grande, and Santa Cruz. At the December 6th meeting, the sub-mayor did not give a reply as to the final plans for city construction or resident relocation for Vila União de Curicica.

Vila União de Curicia houses some 2,000 residents, whose homes fit the guidelines for legal adverse possession of land outlined in Article 183 of the 1988 Brazilian Constitution. Vânia notes that throughout its history, Vila União de Curicica has been a peaceful community that has had an open and communicative relationship with representatives of the Mayor’s office. She hopes that this relationship will allow for a clear dialogue with the city government about next steps, with the desire of Vila União de Curicica residents to stay in the Jacarepaguá area respected. They are awaiting word.

This article was written by Catherine Osborn, and published on December 13, 2012.
in #EvictionsWatch, #Rio2016, by International Observers, Interviews & Profiles, Policies, Violations