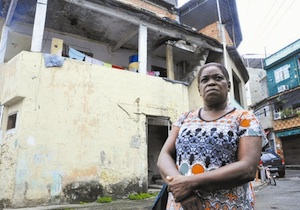 Carmélia, in front of the house she had to leave after rent doubled from R$300 to R$600. Photo: Estefan Radovicz / Agencia O Dia

Since the Complexo do Alemão community was pacified in November of 2010, increased real estate values have caused sleepless nights for at least 417 families left homeless by higher rents. The increase has been greater than 100% in many cases. Residents of the Parque Novo allotment, these families have now occupied the premises of a church that will soon be expropriated by the state to make room for a new public housing development.

“There was no way we could stay. Rent used to be between R$100 and R$250, but now it’s between R$300 and R$1000,” said Débora Rodrigues, President of the Parque Novo Residents’ Association. Yesterday the families began registering for social rent at the Secretary of Social Assistance. The first installment of R$400 is to be paid February 28. After that, residents will have 15 days to leave the grounds of the church. “I don’t know if we’ll find a place to live here, even with the rent subsidy,” said Débora.

Carmélia Andrade de Souza was renting a house for R$300 (US$150/month). “The week after pacification, the owner asked me for R$600. I said I couldn’t pay that, and he said I had to go. That’s when I joined the occupation. Groceries went up too. I used to make and sell snacks and açaí. But since prices went up, I haven’t even had enough money to buy the ingredients. For R$500 I’m only finding places of up to 15 square meters — impossible for a family,” she complains.

Marlucia Nunes, mother of six, suffers from a respiratory condition and can’t make it up to the top of the hill where rent is cheaper. She complains that property owners still require three months’ rent as deposit. “I was renting my place for R$250. It went up to R$500. Where’s the money to eat and pay for electricity and water?”

This article was written by Alessandro Lo-Bianco, and published on January 30, 2013.
Translation provided by Rachel Fox. This article originally appeared on O Dia. in #GentrificationWatch, Interviews & Profiles, Policies, Translated by RioOnWatch