According to MonitorAr-Rio’s data, of nine such stations in the network, the West Zone neighborhood of Bangu’s air quality monitoring station showed the worst performance in the second half of 2012. On December 25th, the worst day in that period, the air quality in Bangu was 213 points – which classifies it as “bad” on a scale of five possible classifications: good, regular, inadequate, bad, and awful. In the port area on that same day, the measure was 47 points, a “good” classification.

The data from the second half of last year indicate that the main reason for the bad IQA in Bangu was ozone. The concentration of ozone was higher there than in any of the eight other areas, and above all on sunny, hot days. Over Christmas 2012, thermometers peaked over 41ºC and the levels of ozone in Bangu were the highest of the period at 280 points.

There is a direct relationship between the high levels of ozone and high temperatures. “Ozone is a pollutant formed by solar light and photochemical oxidations”, a study by the Geography Institute (IGEO) of the Federal University (UFRJ) explains concerning the concentration of ozone in the Rio de Janeiro Metropolitan Region.

In the stratosphere, ozone forms an important protective layer against solar radiation. At lower atmospheric levels, where humans live, high levels of ozone can be detrimental to health. The study continued: “The direct consequences of exposure to high levels of this gas are irritation to the eyes and respiratory tracts.”

An environmental and public health question 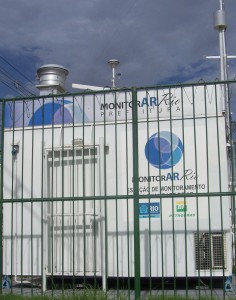 Whilst Bangu has the worst air quality in the area, Centro (downtown) and São Cristóvão had the best, with over 70% of days classified as “good” and no negative results, even though vehicular traffic – a cause of urban pollution – is intense in both areas. The proximity to the sea and Guanabara Bay help to dissipate the pollutants.

In Bangu, where MonitorAr registered less than 20% of days with good air quality, the local geography is telling. The neighborhood is between two mountain chains: the Maciço da Pedra Branca to the South and the Serra de Gericinó to the North. “Bangu is in a valley, which means pollutants do not disperse so much and end up getting concentrated,” the environmental specialist Sérgio Ricardo explains.

July was the month with the best levels, with no day classified as “inadequate” or “bad.” December was by far the worst, with no good quality days and more than half as either inadequate or bad. According to MonitorAr-Rio, from 100 points upwards on the IQA scale – indicating poor quality – people can start showing symptoms such as a dry cough, tiredness, heat in the eyes, nose, and throat, as well as more serious effects on more vulnerable groups.

Bangu is part of Planning Area 5 of the city (AP5), corresponding to the administrative regions of the West Zone including Realengo, Bangu, Campo Grande, Guaratiba and Santa Cruz. Together with AP3 (North Zone), they have the least forest cover in the city. Moreover, the main forest in the region – in the Parque Estadual da Pedra Branca – is being deforested due to increasingly dense occupation and pressure on space.

According to a study by the University of Aveiro in Portugal, the presence of vegetation is an efficient way of combatting urban pollution, including ozone. Ana Lúcia Feitais Fernandes, in her dissertation ‘The Impact of Green Spaces on Air Quality’, says that “The increase in green areas in urban spaces with high ozone levels can be a viable strategy in reducing those levels.”

The MonitorAr data provides a warning to government agencies. The levels in Bangu are the most alarming in Rio de Janeiro city in terms of air quality, and the seriousness of the situation is not only an environmental question but also one concerning public health and wellbeing.

This article was written by Paloma Silbar, and published on February 5, 2013.
Translation provided by Tom Winterbottom. in Policies, Sustainability