Nine out of ten residents of the favelas in Rio de Janeiro, under the age of 30, access the World Wide Web. The majority access the Internet on a computer from home and prioritize social media, such as Facebook, when online.

The research, based on 2000 interviews, was conducted between the 17th and 22nd of December 2012 for Solos Culturais (Cultural Grounds), a partnership between the State Secretary of Culture and the NGO Observatório de Favelas (Favela Observatory). 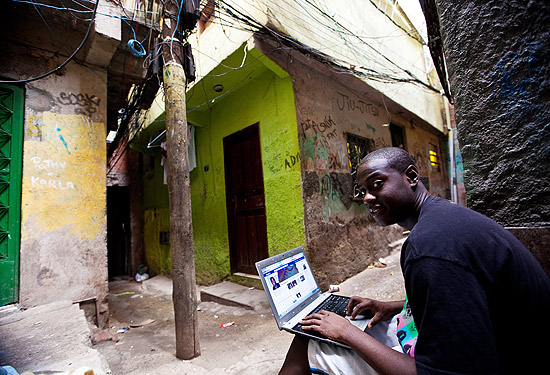 According to the researchers, the Internet buy-in from this portion of the population is a sign of change.

“The citizen who in the eyes of society is invisible when walking down the street is recognized on social networks like Facebook. The excluded attains visibility in the virtual realm. This represents a revolution in the city’s imagination,” evaluates Jorge Luiz Barbosa, Professor of Geography at UFF (Federal Fluminense University) and director of the Observatório de Favelas.

He believes the Internet has a potential to establish bonds that is yet to be explored.

“The kid in the favela posts a video on YouTube about Brazilian funk dance steps. This video will eventually be watched by the boy in the luxury condominium. These cultural crossings bring hope to a society marked by differences,” says Barbosa.

In addition to participating in social media, the interviewed Internet users also use computers to download music and store videos and photos.

The personal archive created by each user is also cited as unprecedented.

“Before, a lower income citizen had no means of purchasing a camera. Today, any mobile phone can take photographs, which makes it possible to build a memory that for many generations never existed,” added the director of the Observatório de Favelas.

The research will be published as the book “Solos Culturais” that will be launched by the end of the month.