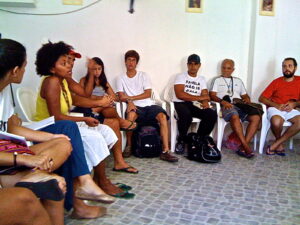 Over sixty favela residents, public defenders, nonprofit workers, and observers filled the chapel at the top of Laboriaux Street in Rocinha on Sunday for a three-hour meeting organized by residents of various North and South Zone favelas. Dubbed “Favela Não Se Cala” (Favela Don’t Be Quiet), the group gathers once a month, in a different community each time. Last month they met in a chapel at the entrance to Cantagalo along the snaking staircase familiar to those who don’t use the famous elevator.

“Everyone who would like to make a comment will have the chance to speak,” explained Andre Luiz of Babilônia, one of the group’s facilitators. The meeting’s purpose was to share anecdotes from across the city about different communities’ recent interactions with the city government, especially concerning the favela upgrading process and its components, including home removals, the regulation of utilities, and negotiations surrounding government buyout of homes.

“One unfair thing in this process are the inconsistencies in the utility bills that people suddenly have to pay with regularization,” said Ricardo Duarte of Rocinha. Duarte said the bills were coming out to be more than residents owed legally, but that people were accepting the charges because they didn’t know any better, and in some cases, prices were almost as high as entire rental payments. “People think it’s getting bad in Babilônia when they are getting charged R$300 per month by (electricity company) Light, but over in Estradinha (a part of the Tabajaras favela in Botafogo) people are having to pay R$600.”

“Meanwhile in Rocinha,” he continued, “the PAC (federal Growth Acceleration Program) project was finished in time for the elections, the government is currently building a cable car that residents did not ask for, we are getting charged a fine to have music events in the community, and people are being told, ‘accept R$46,000 for your house or you’re going to Bangu (an area in the West Zone of Rio where public housing is being built).’” As Duarte stood to say all of this, a film crew swiveled their three cameras toward him. They were taking a video of the event’s comments to share in the future. 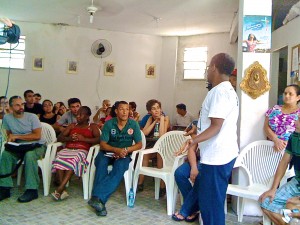 A representative speaks from the Pastoral das Favelas, a church-based organization that has worked on behalf of human rights for Rio favela residents for 35 years.

Deley de Acari, a community leader from the North Zone, spoke next. “In Acari people are accepting far less money than their homes are worth in negotiations with the city government because they don’t know what is standard. They are accepting twenty thousand, thirty thousand reais.” In the past, housing secretary Jorge Bittar has said that 25,000 reais would be the minimum amount with which the city government would compensate someone for their home, and that was if it were “a wood shack.” Like Rocinha, Acari is in the middle of receiving upgrades from the PAC program that include paving streets and improving public spaces. At its entrance stands a poorly-maintained public hospital, the second-largest in the city, which was finished in 2008.

“Watch out for projects that are supposed to bring money into the community,” continued Deley. “There is a lot of talk, for example, about the shopping mall coming to Complexo de Alemão, but the money made there is not going to stay in the community. And you all should continue to share and discuss all of this. If you need to, don’t hesitate to call me or call André.” Several numbers were exchanged during and after the meeting; Ricardo Duarte announced his email and phone number twice for all to hear.

Public defenders, nonprofit workers, and residents alike spoke about the importance of discussing what was going on with residents of both their own and other communities. “A lot of people don’t have access to the Internet or are not able to read about this. This needs to be a conversation that you’re having with your neighbor and inside your home as well,” said architect Fatima Tardin to a round of applause. Clapping followed several other comments, and over the course of the event there were a few emotional moments during which the discussion paused entirely.

A red Landless Workers’ Movement hat was passed around to collect contributions for the group; one of the organizers emphasized that they did not accept money from organizations, just from individuals. 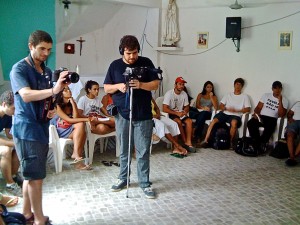 Elisângela Sena of Pavão-Pavãozinho was one of the last to speak. “I have made a list here of some of the things that are going on in Cantagalo and Pavão that I want to share with you all. As you know, we have the pacification police there as well as some public works that are being done. The power has been out in Cantagalo for twelve days. On and off, we’ve been losing water. It’s never been like this before.” Sena used the term “remoção branca” (white eviction) to describe the gentrification going on in the community due to rising rent prices. “In addition to this, people are being charged R$400 for a month of electricity when all they have in their house is a fridge and two lights.”

“What we’ve been doing in Cantagalo is going door to door to document all of this—seeing how people are, asking how much they are being asked to pay for electricity. We recommend doing this. And people in Cantagalo are very upset: we’ve had meetings with hundreds of people that are not as calm as this one.” She invited everyone present to an event at 6pm on Saturday March 9th in the Pavão-Pavaozinhao quadra, or square, where there would be leaders of various communities from across the North and South Zones telling stories and showing videos of their experiences, to be followed by music and cultural events.

Luiz closed the meeting by emphasizing that this was the beginning of a conversation that would continue, among residents, over the “medium to long term.” After three hours of discussion, the seats were still filled and the crowd still continued out the doors and down the front steps of the chapel. “We can’t keep thinking individually about this,” he said to a listening audience. “The system wants to eliminate us, but we are more than just a pretty view. There is a history here.”

This article was written by Catherine Osborn, and published on March 8, 2013.
in #GentrificationWatch, by International Observers, Policies, Solutions, Understanding Rio, Violations