For the original report in Portuguese in O Globo click here.

The buildings were to be inhabited by the 450 families that lost their homes in Niterói’s tragedy of 2010. 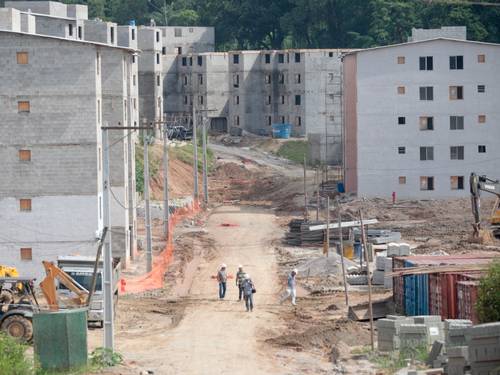 This Saturday marked the beginning of the demolition of blocks 3 and 5 of the Zilda Arns buildings I & II. Cracks have been found in the buildings, which compromise the safety of their structures. According to the Caixa Econômica Federal bank, which released R$27 million to the construction company Imperial Serviços Limitada to erect the buildings, Block 5 should be demolished by Monday March 25th, and the other must be brought down by Friday March 29th. The demolition work is being carried out by Imperial, which has had men and equipment on site since last Saturday. The Caixa Economica Federal also orders that demolition work will not be done using explosives, but rather with the aid of proper equipment.

The buildings, which were built for the 450 families who lost their homes in the landslide disaster of 2010, when 47 people died, have been found to have cracks and will need to be rebuilt. The construction of the Minha Casa Minha Vida apartments, promised to be ready for July of this year, will now be delayed after two of the 11 buildings erected in the neighborhood of Fonesca have been found to have cracks, as was shown on Wednesday’s newscast “RJTV” by Globo TV. Each building cost R$ 2 million, which forms part of the total budget of $ 27 million given by Caixa Economica Federal to the contractors, Imperial Serviços Limitada.

The residential development of Zilda Arns I & II, located on Rua Teixeira de Freitas, will have 454 apartments. Each building will have five floors. The cracks were found in the apartment units of Zilda Arns II, which cost nearly R$ 22 million to build. Representatives from the Caixa Econômica Federal bank and Imperial Serviços Limitada met on Wednesday to discuss the project’s problems. The contractor argued that a shift in the soil was responsible for the cracks. The company did not provide a new deadline for the completion of the units, since the buildings will need to be rebuilt, this time with special care in order to avoid the same problems occurring again.

Given that the apartment units of Zilda Arns I have not been affected, they are scheduled to be ready for April of this year. The building has a total of 83 units. According to a spokesperson for the Caixa Econômica Federal, there will be no change in this schedule. If it is confirmed that the problems in the two buildings were solely due to flooding, the costs of demolition and reconstruction will be borne by the insurance companies. Otherwise, the costs will have to be assumed by the contractor.

Meanwhile, 368 people, including 144 children, have been placed in the third Infantry Battallion, and are living amidst garbage, in conditions lacking hygiene. In one of the bathrooms, three out of the four toilets have been removed. The only remaining one is broken. As a result, the floor is littered with feces and urine, and an awful smell has overtaken the entire place. A rat was seen in the bathroom.

Nevertheless, problems in Rio’s recently built housing projects are not restricted to the Zilda Arns complex. For instance, in a 180-unit complex in Niteroi’s Viçoso Jardim (which faces Morro do Bumba), residents are pointing out various problems. Whenever it rains, there are landslides at the back of the complex, even though it is only one year old. Furthermore, an area next to the windows of two of the buildings was marked as forbidden to trespass. Meanwhile, in Duque de Caxias located in the Baixada Fluminense (Rio’s Greater Metropolitan Region), the Minha Casa Minha Vida condominiums Santa Helena and Santa Lucia Park in Parque Paulista have been flooded by this week’s heavy rainfall. Floods have already affected the residents of another Minha Casa Minha Vida condominium, Bairro Carioca, located in the Triagem neighborhood. Less than one year after the condominium was inaugurated, cracks in the building are already being found. Similarly, in Realengo it’s already been two years that residents of the Ipê Branco e Ipê Amarelo condominiums are having to deal with sinking soil, falling tiles and various leaks.

This article was written by Simone Candida, and published on March 28, 2013.
Translation provided by Sarah De Rose. This article originally appeared on O Globo. in Policies, Violations